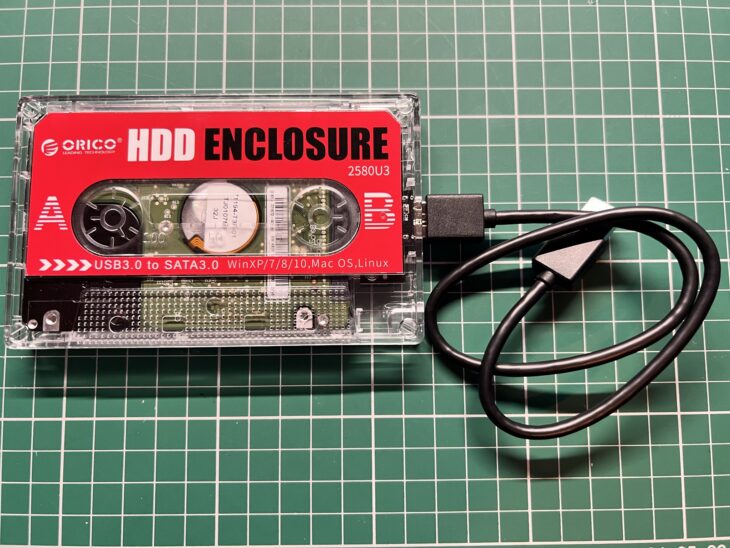 Picked this funky little retro cassette HDD enclosure up off Amazon a few days ago as I just couldn’t resist the look of it. It’s nothing special, just a cheap enclosure that you can pop a 2.5″ HDD/SSD in for some portable storage. However it’s been designed to look like a cassette tape which is what attracted me to it. 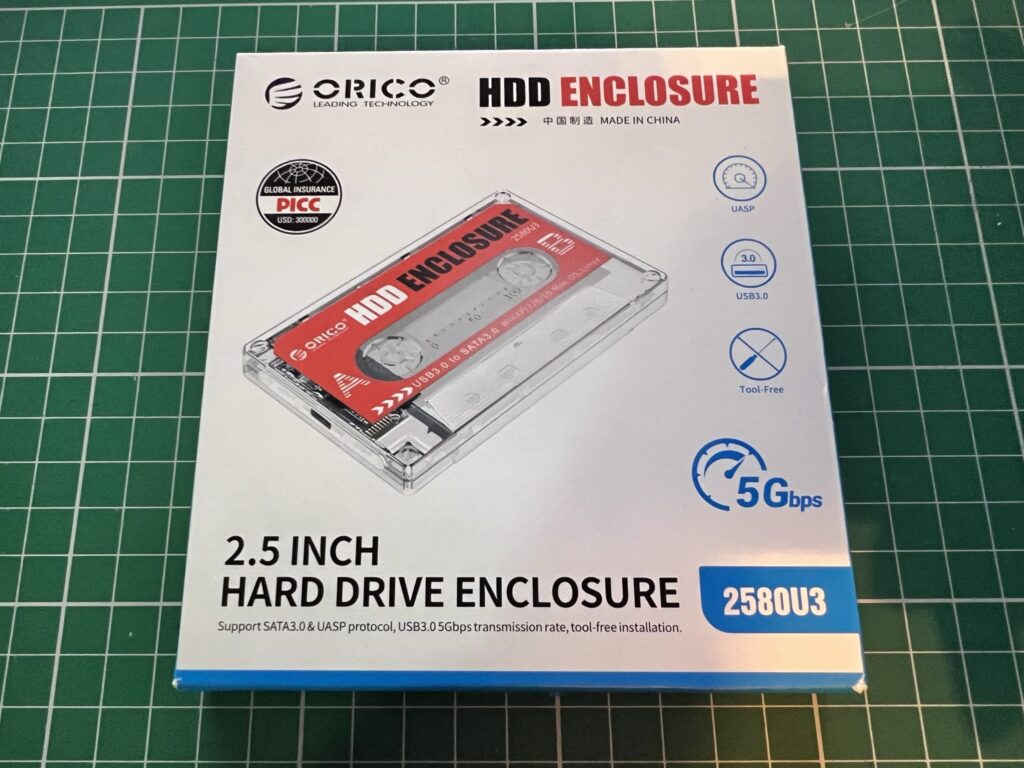 Front of the box.

It supports USB 3.0 as you would expect and claims a 5Gbps transfer speed which I’m not going to bother testing. I’m here for the looks! 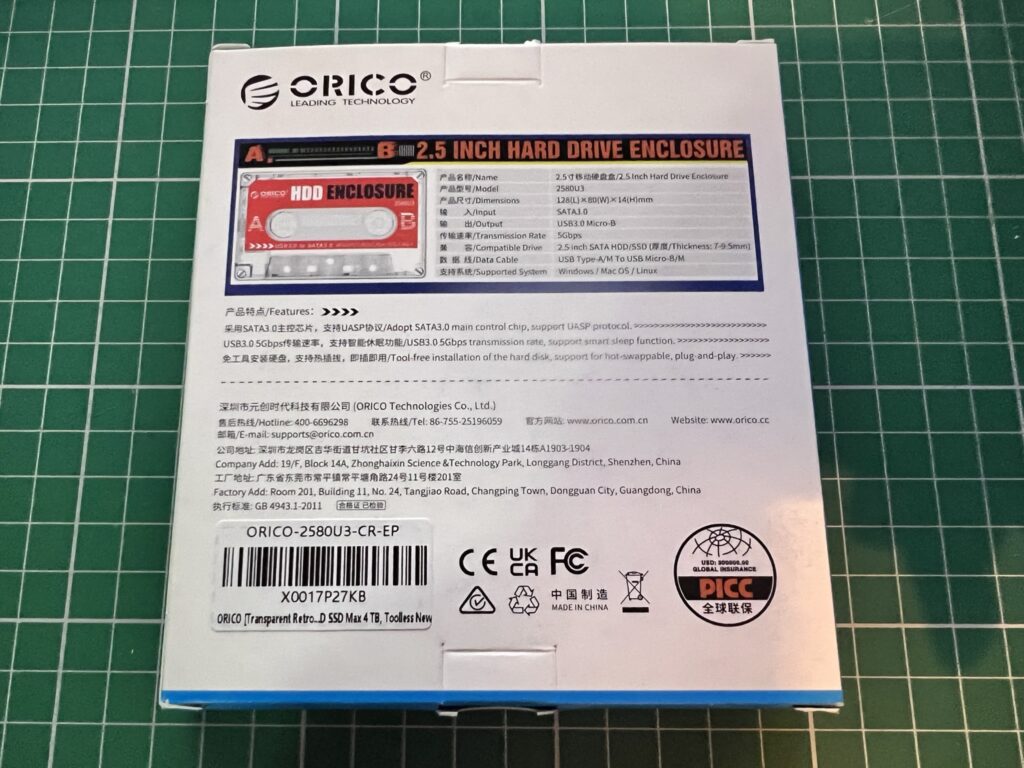 What’s in the box?

Inside the box you get the ‘cassette’ enclosure, a short USB 3.0 cable, some stickers and some rudimentary instructions in Chinese and ‘Chinglish’ as is expected with cheap electronics these days. 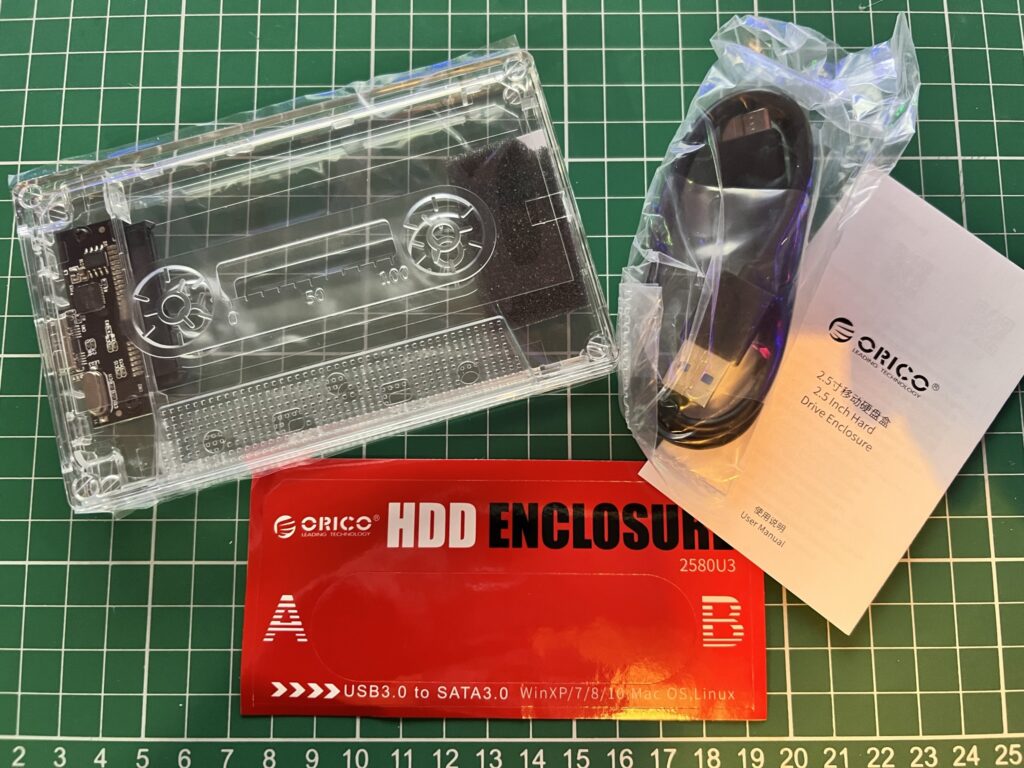 A look at what came inside the box.

The enclosure is made from transparent plastic and it came with a protective wrap to prevent scratches which peeled off easily. 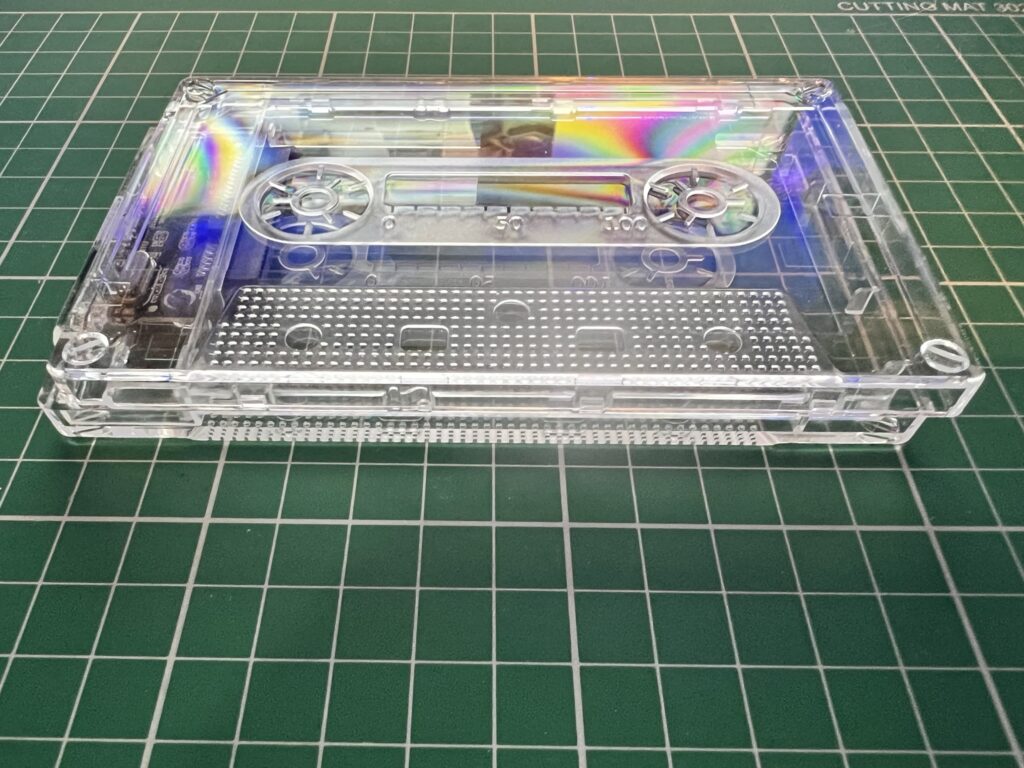 Opening the case seemed like some sort of fiendish Rubik’s puzzle at first… until it finally dawned on me that the two halves slid apart instead of unclipping! To be fair the instructions did mention the word ‘slide’ but it was by no means obvious! 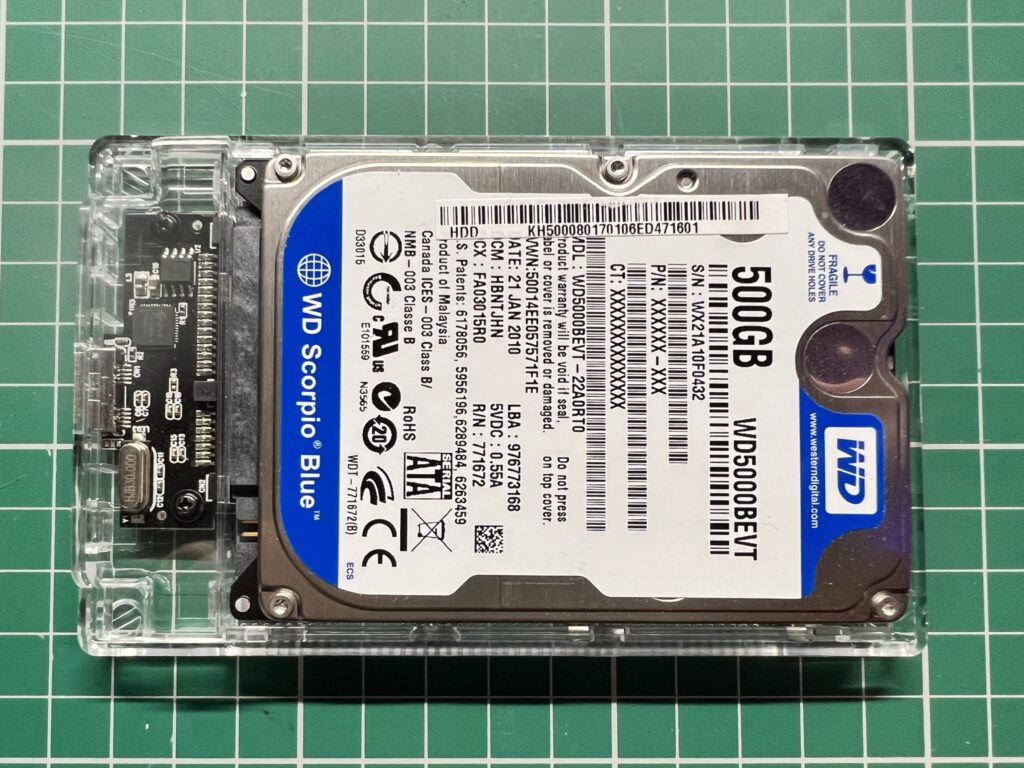 I had a bunch of old 2.5″ laptop drives rattling around in the bottom of my desk drawer so installed one of those inside the enclosure, a process which took all of about five seconds. 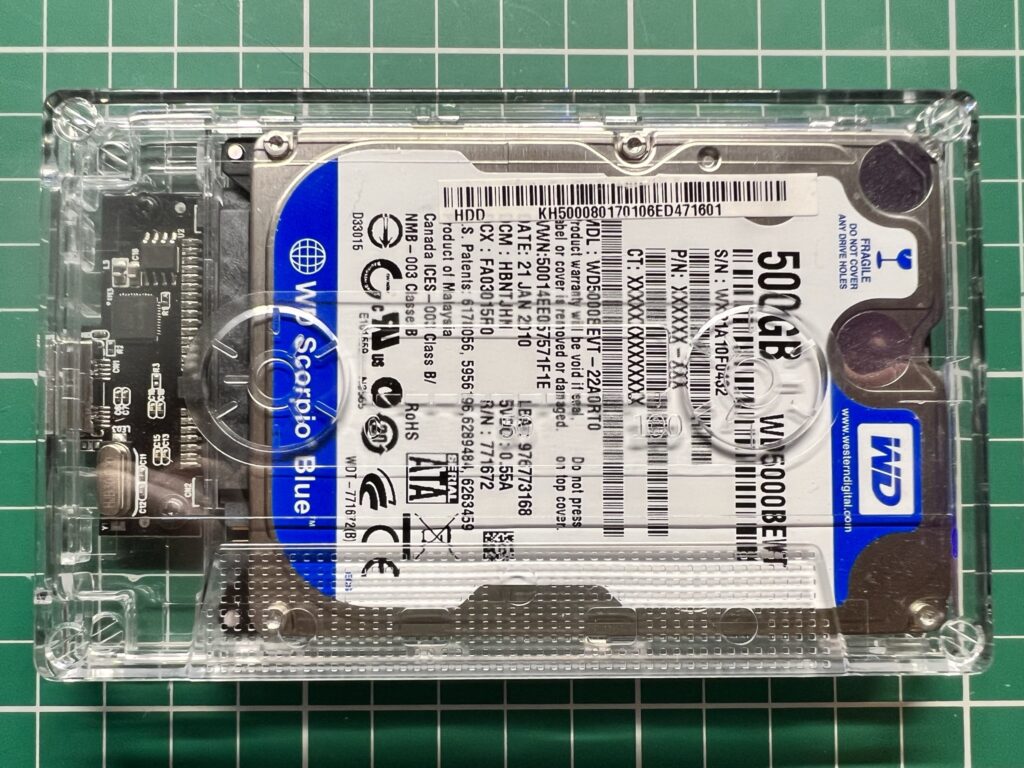 Lid back on the enclosure.

Putting the lid back on proved to be far easier than taking it off! 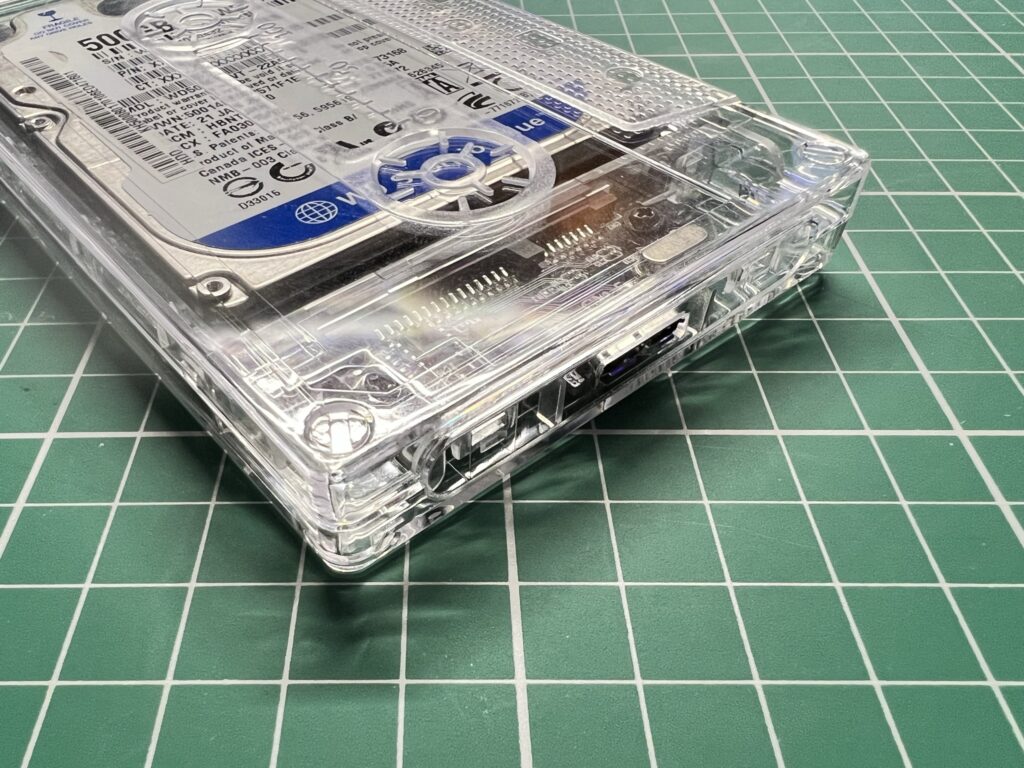 Close-up of the business end of the enclosure.

My HDD was pretty chunky so it fit snugly with no room to spare which means it didn’t rattle around. A piece of self-adhesive foam was supplied in the enclosure which could be used as padding for thinner drives such as SSD’s to prevent them from moving around inside the enclosure. 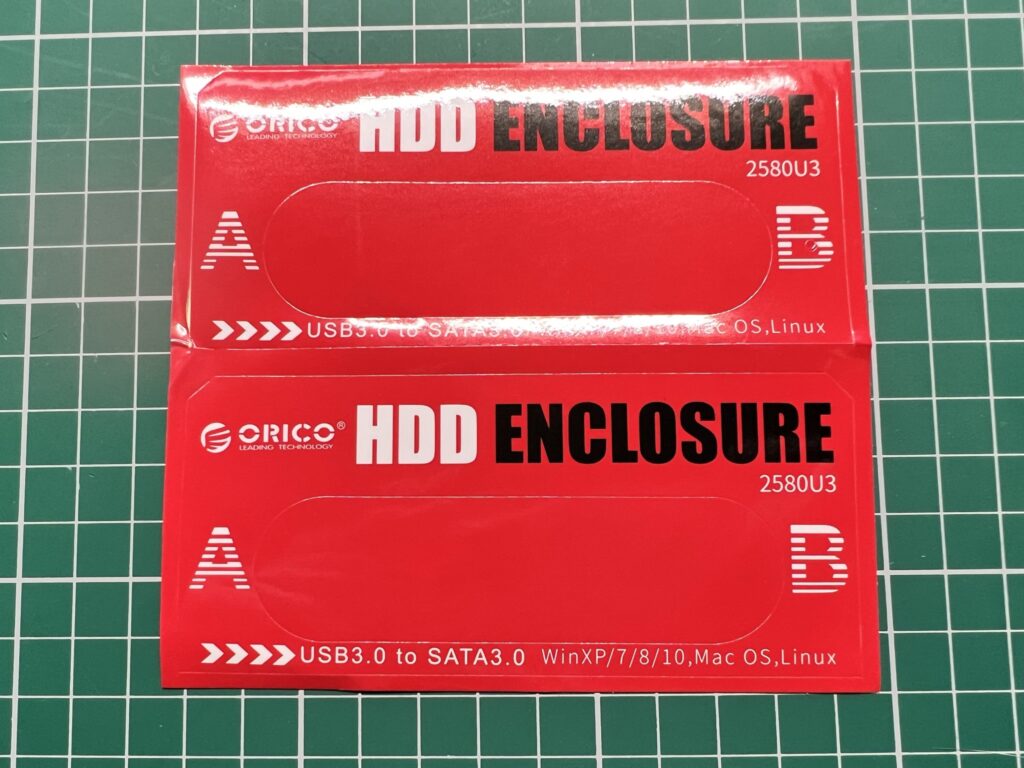 Of course at this point it still looked like a transparent case with a hard drive inside it. Time to affix the stickers! 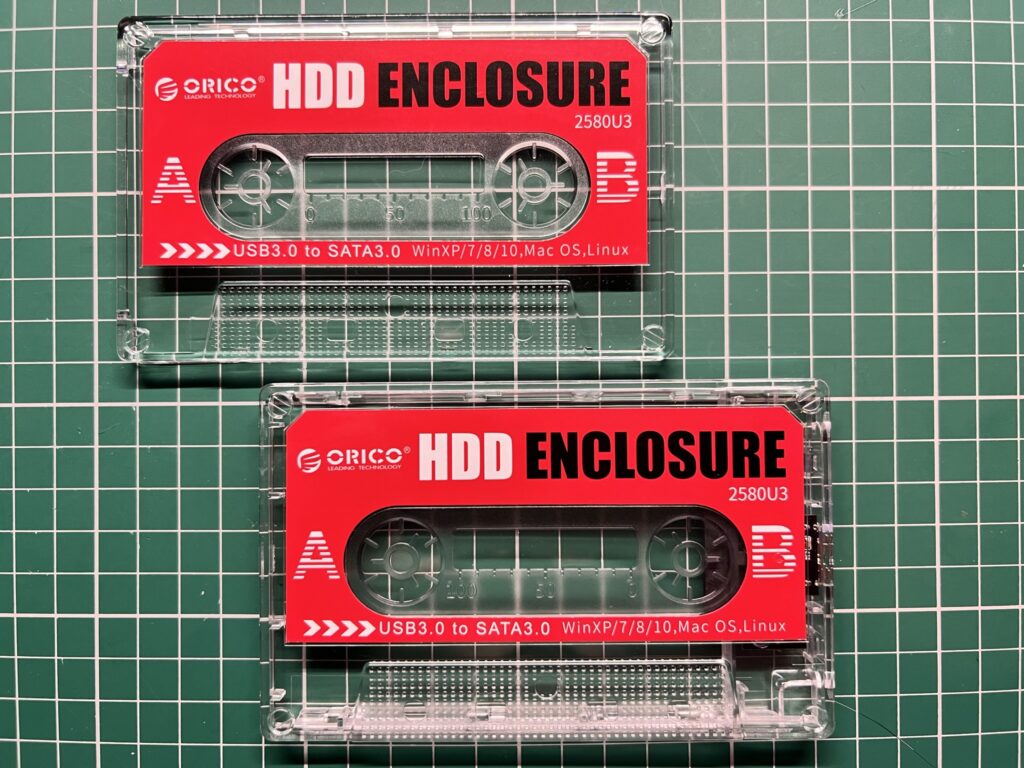 Two stickers are supplied in the box, one for each side. I found it much easier to see what I was doing without the drive installed so I took the enclosure apart and removed the drive. Once I’d done that I found them very easy to align and stick on. 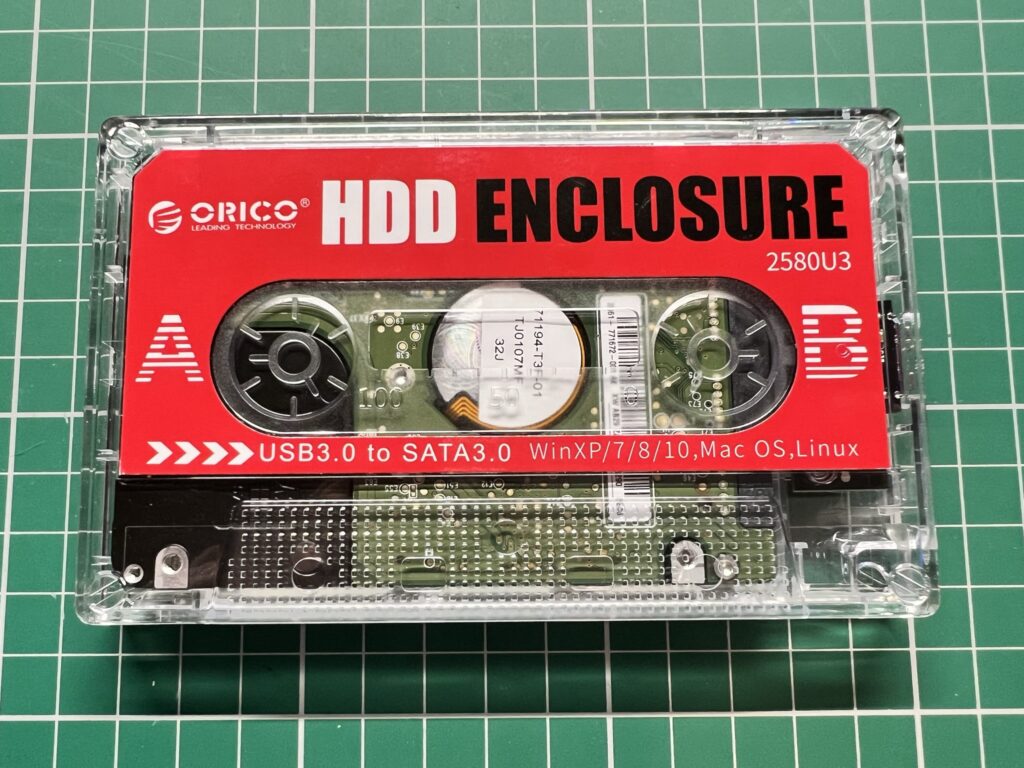 With the the stickers applied the transformation was complete and I had a cassette tape with a 500GB storage capacity! It definitely looks the part and is a lot more interesting to have than a plain old boring black plastic case. 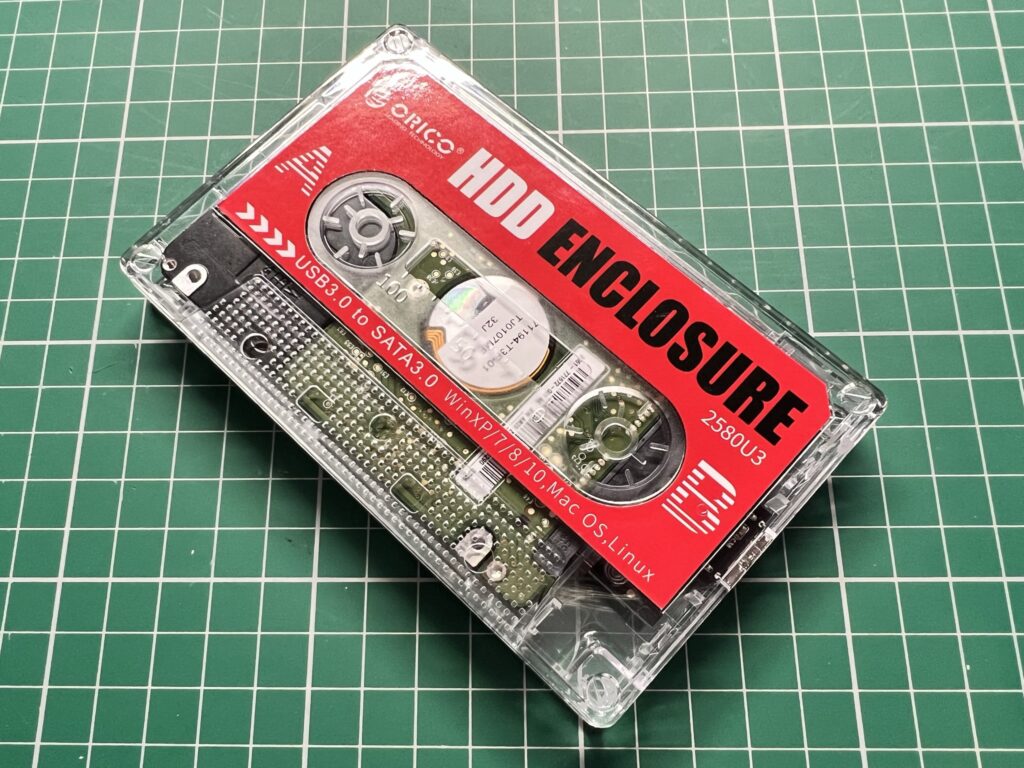 Below is a photo alongside a regular cassette tape for comparison. Clearly it’s quite a bit bigger but it needs to be so that a regular 2.5″ drive can fit inside. 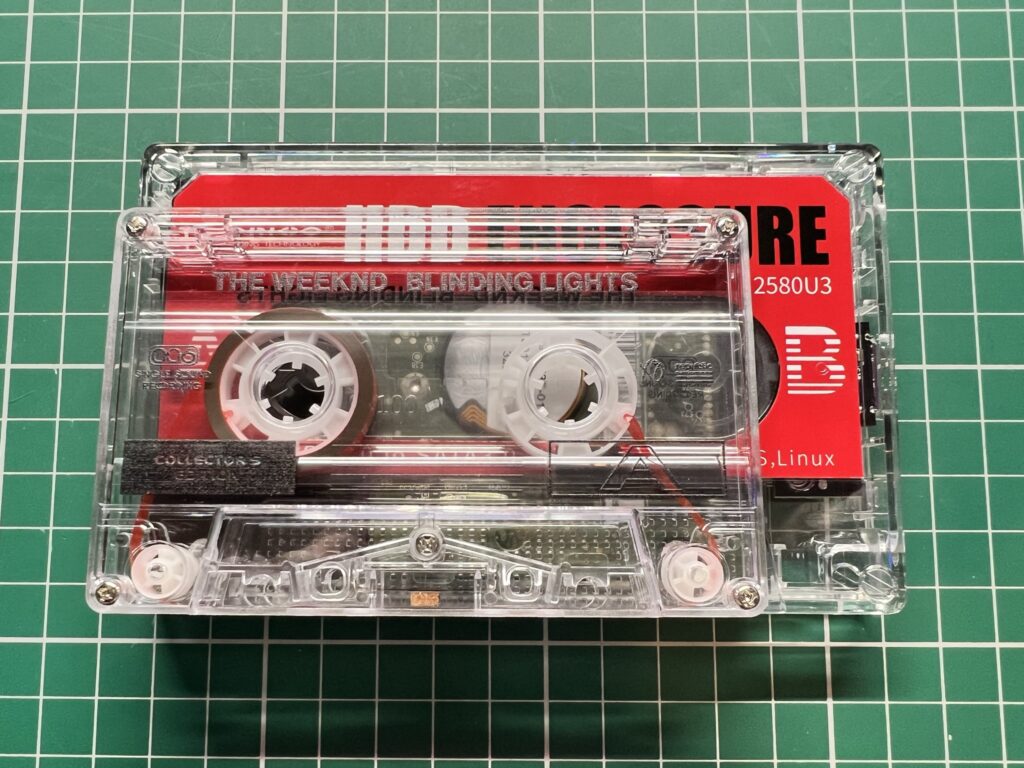 It worked without any fuss when I plugged it into my PC, just as you would expect really. However it did so whilst looking cool, which is something you can’t say about the majority of storage solutions available these days! It brings a smile to my face every time I get it out of the drawer and everyone who sees it on my desk comments on it which makes it totally worth the few quid it cost in my book.

If I wanted to be really flash I’d probably install an SSD, however I bought it as a fun (and cheap!) way to make use of an old drive so I’m quite happy with it the way it is.