I received a nice package in the post this week containing half a dozen classic games for the VIC20. Four of these are actually re-acquisitions after I foolishly sold them. In my defence, at the time I believed I no longer still had my VIC20 so had little use for them. The other two (Skyhawk & Myriad) I only ever had copies copies of. I wanted to have the original games in my collection. 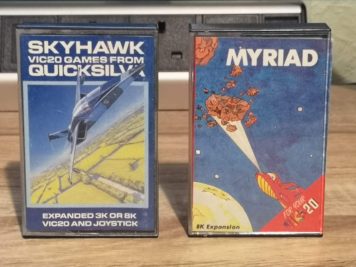 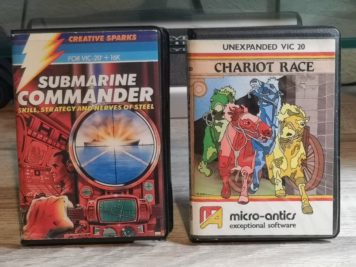 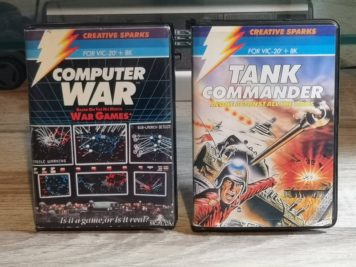 All but one of the games loaded fine, though a couple needed a second try, either from the flip side of the tape or in the case of Skyhawk, the correct side of the tape! Sadly Tank Commander just didn’t load at all, it never even registered a ‘found’ on either side of the cassette so that one goes back on my shopping list…

They’re all in great condition and complete with their little instruction booklets. I have to admit I’ve never really been a big fan of these early plastic clam-shell cases. They often tended to have ill fitting inlays that stuck out of the top or bottom of the case leading to them becoming dog-eared or worse. Thankfully these cases have fared pretty well considering their age and still look really smart.

A brief look at each game together with a screenshot

I thought I’d honour the occasion with a screenshot of each game taken after I got them to load (or not). Maybe it will jog a few happy memories for you too. I know I had completely forgotten what a few of these looked like until loading them up. Crucially I’d forgotten what they sounded like! The woosh and thrum of my harrier jump jet loading fuel and getting ready to fly in Skyhawk instantly whisked me back to my childhood for example. 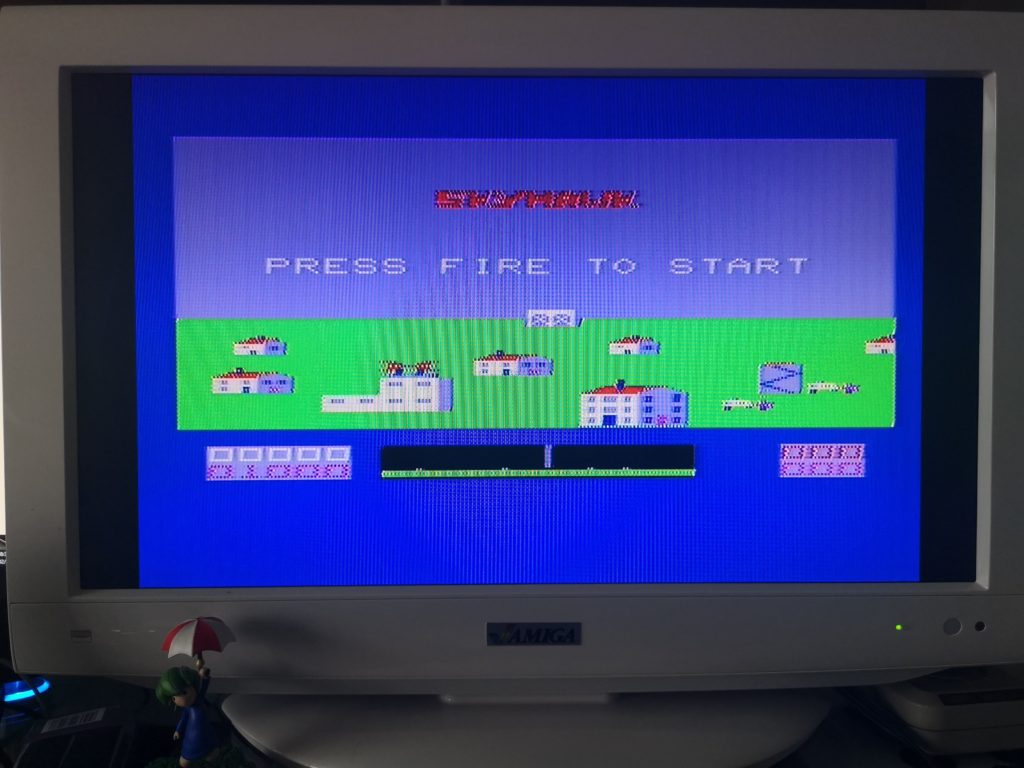 Skyhawk by Quicksilva – needs either a 3K or 8K RAM expansion. Make sure to load the correct side or you’ll get an ‘out of memory’ error! I used to love this game, even preferring it to Falcon Patrol on the C64. It just just seemed to play and sound better to me, offering a faster paced game that was just more fun to play. Even the bright chunky graphics had a charm of their own that FP couldn’t match. 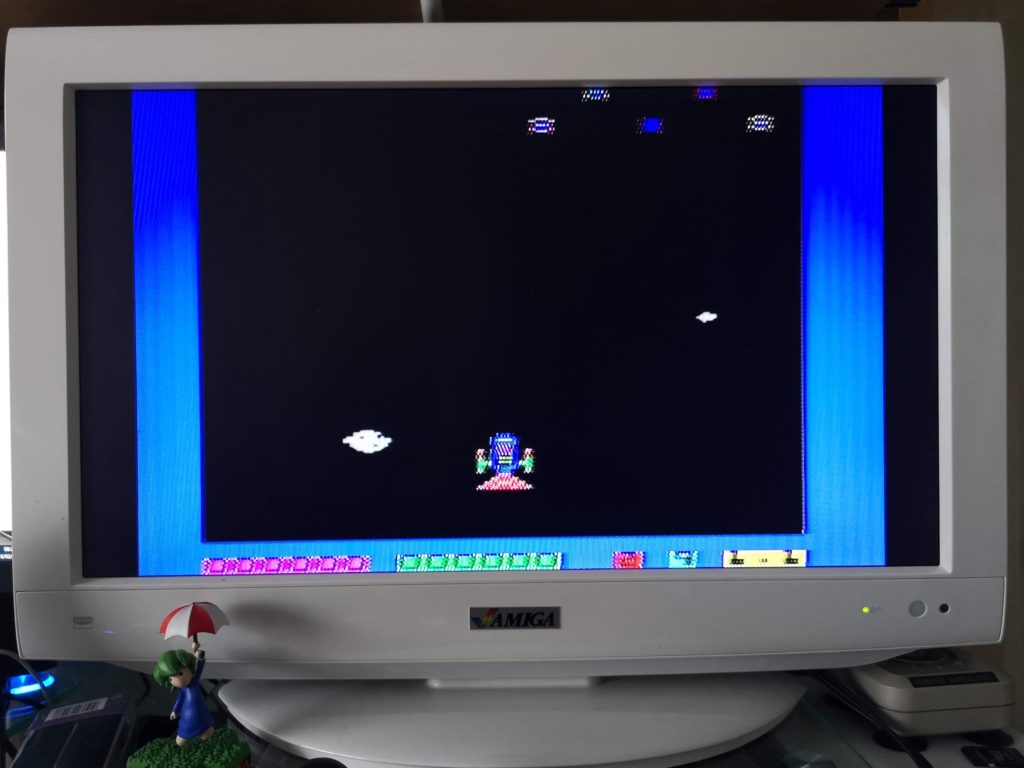 Myriad by Rabbit Software – needs 8K RAM expansion. A brilliant little vertical shoot ’em up with colourful graphics and great sound effects. I found this pretty addictive as a child taking turns playing against my school friend to try and get the highest score. This was one of the games I copied, probably off that same friend I was playing against. I’m glad I finally own the game now. 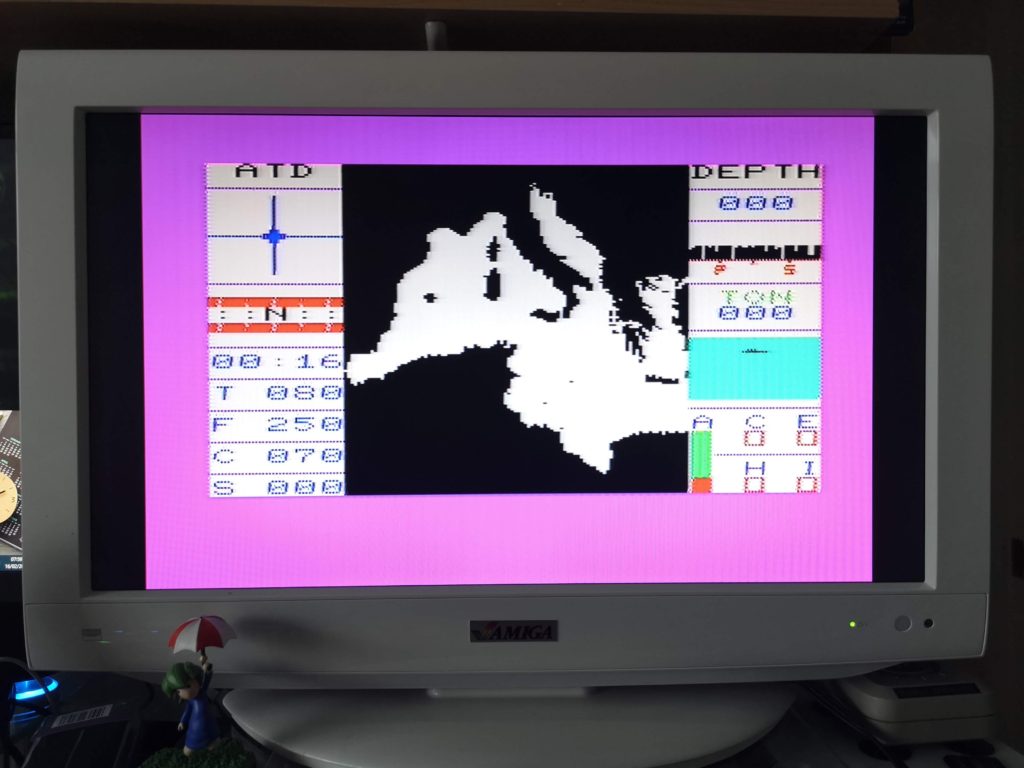 Submarine Commander by Creative Sparks – needs 16K RAM expansion. Not quite on a par with Silent Service on the C64 but still an engrossing sub sim on the VIC that convinced childhood me that I was the Captain of a submarine! 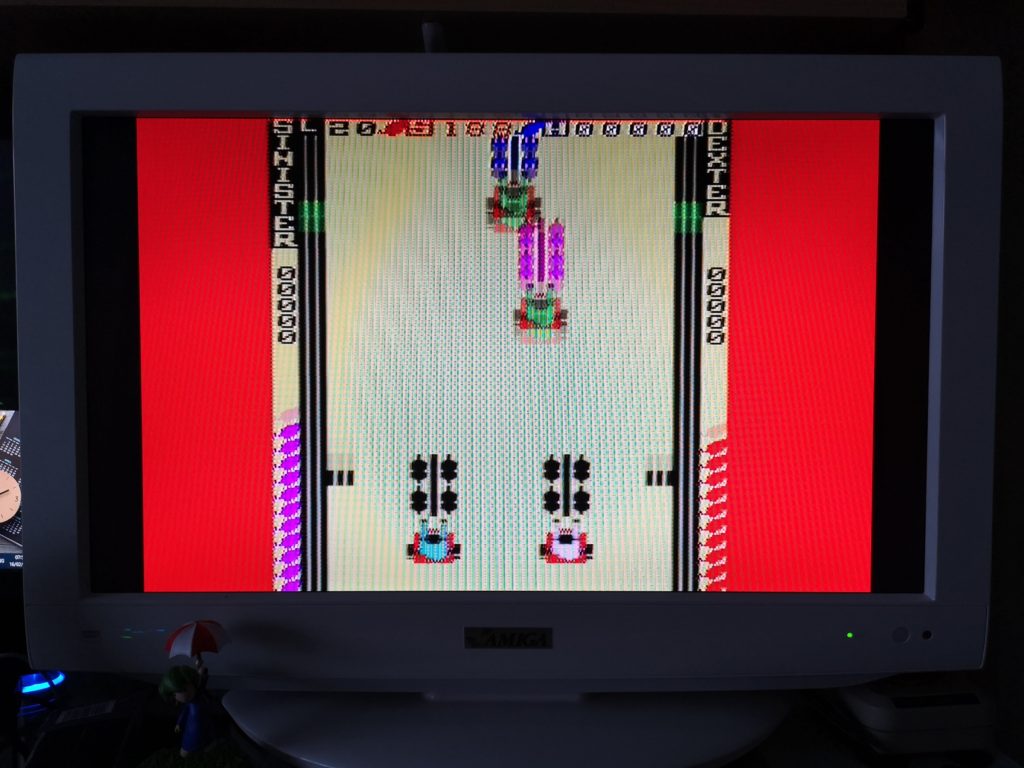 Chariot Race by Micro Antics – the only game here that runs on an unexpanded machine. Amazingly this was one of the few VIC games that had a 2 player option. There was no joystick option though, you both had to use the keyboard to control your chariot. With my much larger adult hands this is probably a bit restrictive now but as a child playing against my sister (and beating her all the time) it was never a problem! 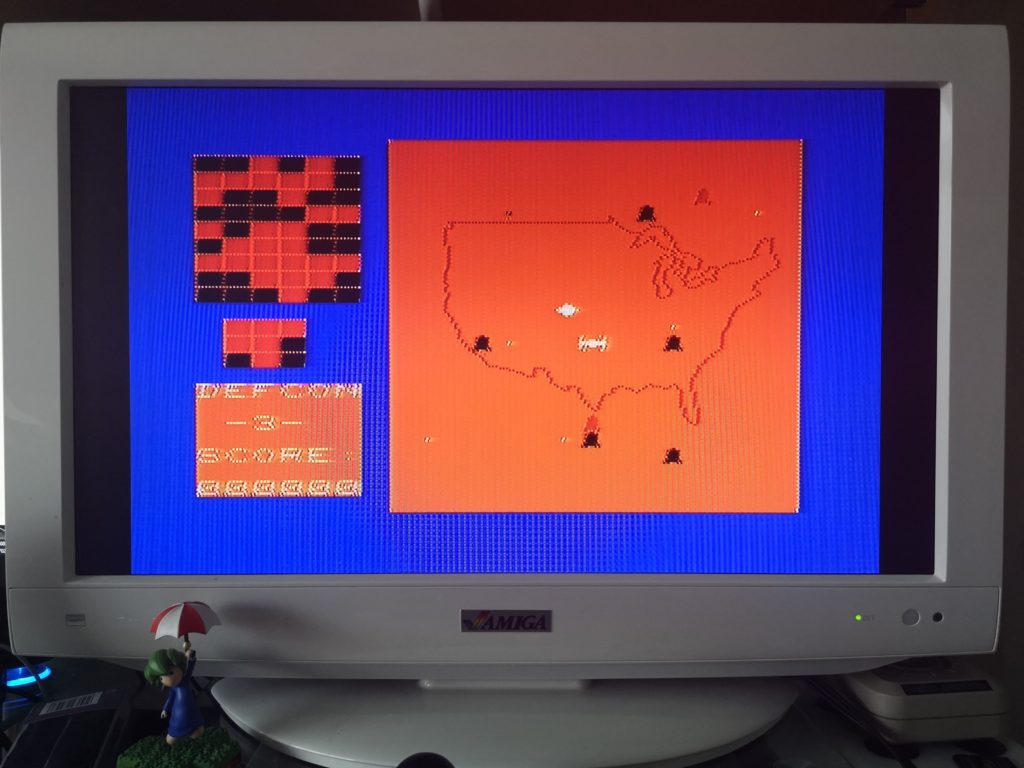 Computer War by Creative Sparks – needs 8K RAM expansion. This was basically a game based on the movie War Games. I suppose you could describe it as a variety of mini games where you had to crack codes and shoot down missiles in order to avoid WW3! This was another game that used to keep me entertained for long periods of time! 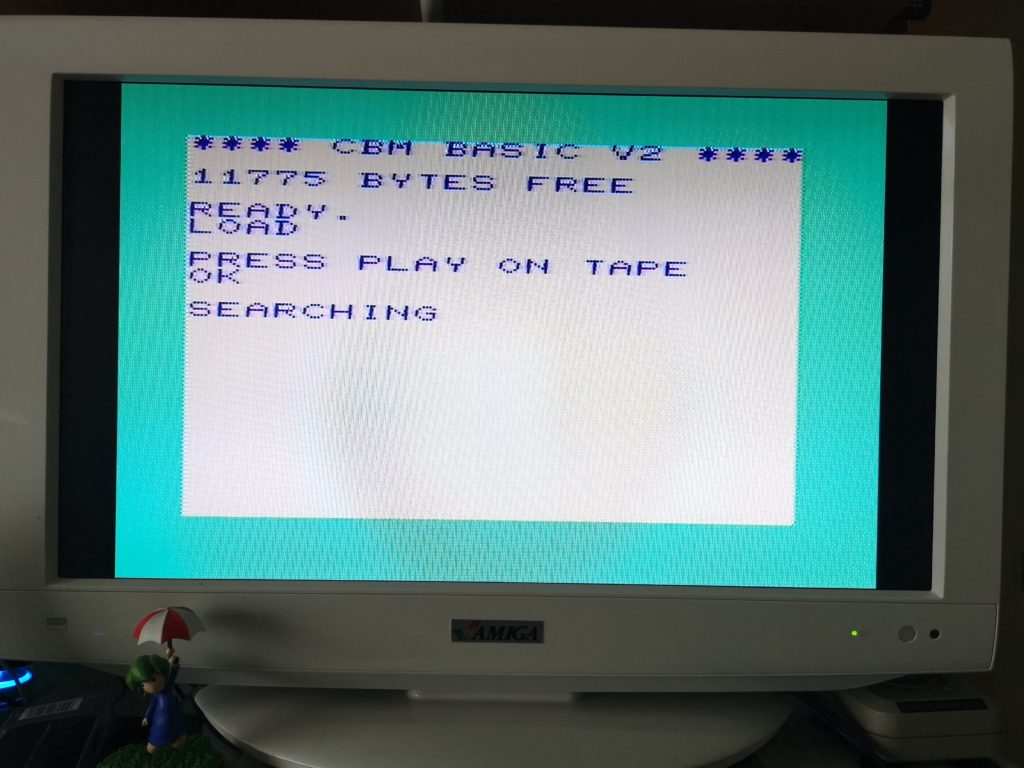 Tank Commander by Creative Sparks – needs 8K RAM expansion. Sadly this is as far as it got when attempting to load it 🙁 It was a great game though, you had to control your little tank within a large scrolling map, taking out enemy tanks and destroying their bases whilst hiding behind cover avoiding their attacks. Think top-down World of Tanks using just 14 kilobytes of memory! 🙂

All of these games were played heavily as a child, particularly those that required more RAM. The extra memory afforded improved effects and more interesting, in-depth games.  I remember being especially fond of Skyhawk, Myriad and Tank commander back in the day. This makes the fact that Tank Commander wouldn’t load all the more disappointing. However I can’t help but be amazed that the other five games still loaded perfectly, nearly 40 years after they were made on a format that was never expected to last this long. 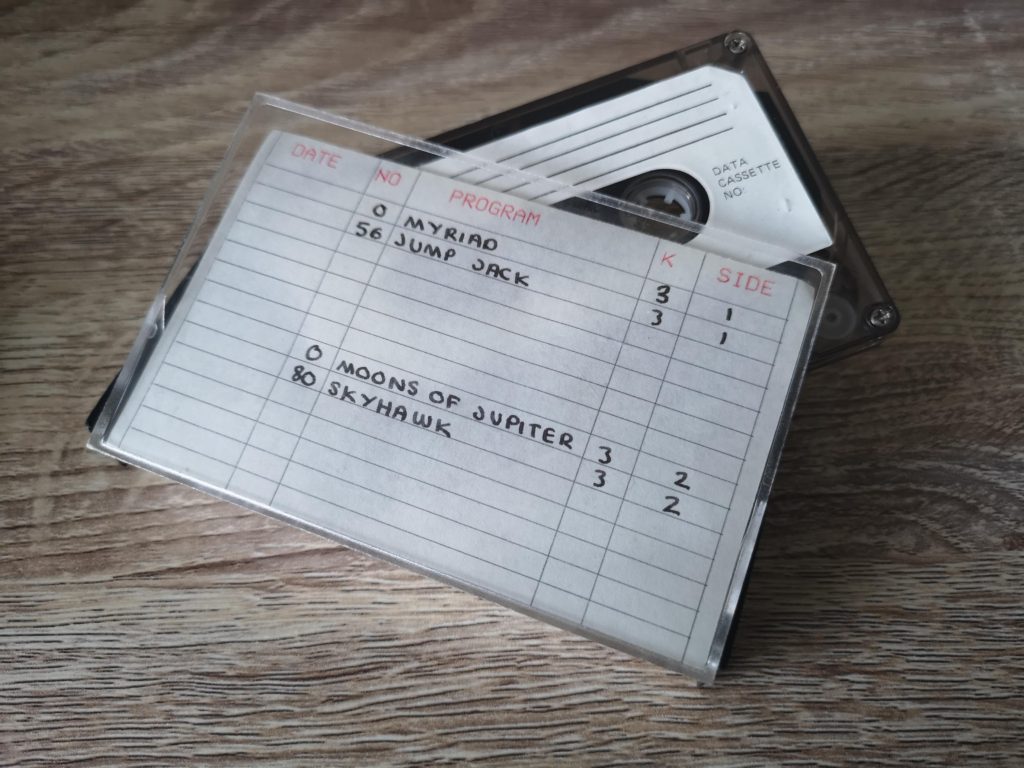 Looks like there’s still a couple of original games I still need to track down before I can retire this tape! Incidentally the cassette inlay was designed and printed on the VIC20 by me using the Commodore 1520 Printer Plotter and BASIC.