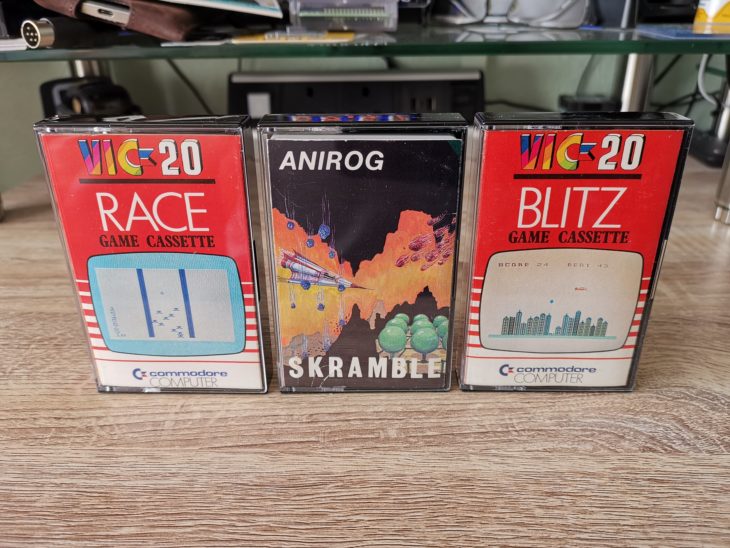 Picked up a few nice games off eBay recently for my VIC20. Although I’ve had all of them in past, this is the first time I’ve actually owned the retail releases for each game. The copies of Blitz and Race I had as a child were part of a compilation tape I got with my VIC20. I only ever had a pirated copy of Skramble so now at long last I have the original game in my collection.

Although the cassette tapes and ‘J’ card inlays were in terrific shape, the boxes on all three were extremely tatty and well worn. The very first thing I did was replace them with new ones and as you can see the games all look as good as new now.

Like many people I got my copy of ‘Blitz’ and ‘Race’ on a compilation tape that came with my VIC20 computer.  I still have this tape (pictured below) of course but thought it would be cool to own the original, stand alone copies of the games too.  It’s holding up pretty well considering it’s now 37 years old!

A brief look at each game

As I’ve done on previous occasions,  I’ve taken some screenshots of each game and written little mini reviews of each. Part of the fun of getting hold of these old games is to relive the whole experience of loading them and seeing if I even remember what they used to look like correctly after all this time.

Despite some horrendous squeaking noises this loaded after a few tries. It’s a pretty spartan game with a brief text introduction and then on to the game. Despite the name and screenshot on the front of the cassette case this is not a racing game. No, this is a dodging game. Move your bike left and right to avoid the other bikes scrolling up the screen. The are four difficultly levels and it gets faster as you progress until you either reach the end or crash. Needless to say it’s not a very entertaining game, and probably never really was. The whole thing is very rudimentary, but then again it looks like it was written in BASIC so you can’t expect too much. Still, it’s a nice little bit of VIC20 history.

This is also a 3.5K game written in BASIC for an expanded VIC20. However this one manages to have a lot of charm and character and is quite fun to play.

The idea is simple, fly your little bi-plane across a randomly generated city as you bomb it into oblivion so you can land. Every time you reach the edge of the screen your plane drops down a row, getting ever closer to the skyscrapers below. You can only drop a single bomb at a time so there is an element of strategy (and luck) to it if you want to succeed. If you time it well you can often drop two or more bombs in one pass which is crucial to clearing the city. Fail to bomb even the smallest bit of rubble away and you’ll crash into it and it’s game over.

I played this quite a lot as a child, the graphics are really pretty good for what it is and the sound effects  work really well too. It’s still actually fun now and a worthy addition to my collection.

I thought this tape was faulty at first as every time I tried to load it I was getting an ‘out of memory’ error. After a spot of RTFM I tried just typing ‘LOAD’ instead of the customary ‘SHIFT & RUN/STOP’ as it suggested. Hey presto – it worked! The screen turned white and the text red and several minutes later the game greeted me with a very colourful  title screen.

I have to say this is by far the best game of the bunch, the extra 16K of RAM really allows the VIC20 to show what it is capable of. Fantastic, colourful graphics, slick side scrolling and punchy sound effects made this one of the best Skramble clones you could play at the time and it still looks great even now. It’s definitely the best version of Skramble you could play on the VIC. Just a shame so few games actually took advantage of the 16K RAM expansion back in the day as the VIC20 was capable of running some great games if given the chance.

It’s was very difficult trying to play this whilst reaching for the phone camera, games back then didn’t have a ‘pause’ feature! I’m looking forward to playing this a lot more now and reaching the end. If my memory is correct there were 6 levels in all with the final one being pretty torturous. I completed it many times over as a child and won’t rest until I do the same now as an older and wiser, albeit probably slower adult!