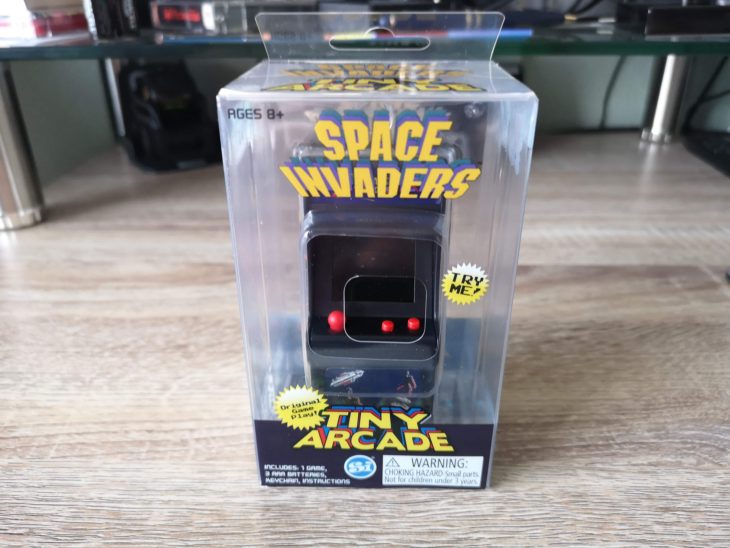 Rounding off this month with something a little different… I’ve seen these Tiny Arcade games around for a while now but managed to resist the temptation to buy one. At the back of my mind I was always thinking they’d just be too small to play on and just a gimmick. Well last weekend I finally caved in and bought the Space Invaders one on impulse at the checkout of my local Game store so here’s my little review of it.

The packaging is all transparent plastic which allows you to see exactly what you are buying. A little cut-out in the front lets you start up a demo without opening the pack (assuming it’s not behind a locked cabinet in the shop of course). Once you’ve got it home only a couple of pieces tape need to be sliced through on the top flap and the whole package opens easily and safely. 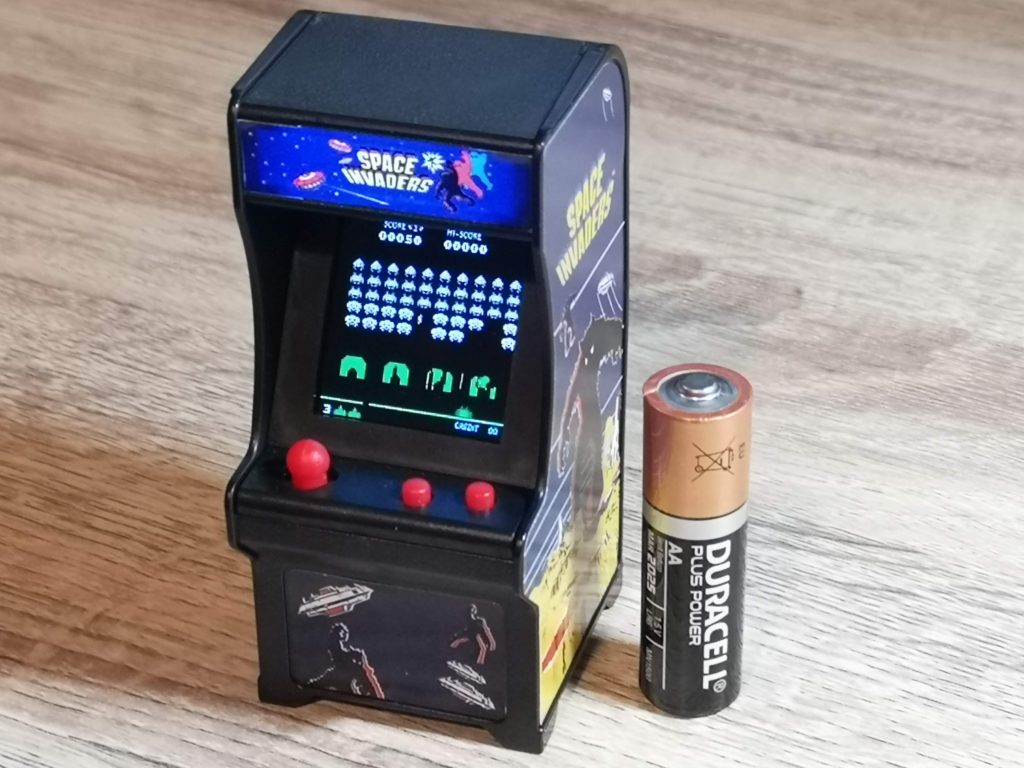 Size comparison with a AA battery

They’re certainly not kidding about it being tiny. Once unpacked it stands just 9cm (3.5″) tall and 4cm (1.5″) wide. It’s powered by 3 AAA batteries and a set are supplied inside it. There’s an on/off switch on the rear although I won’t be using that so much myself. The device goes into sleep mode if you don’t touch it for 30 seconds and so long as you let it do this it maintains your high score. I think that’s well worth sacrificing a little battery life for. 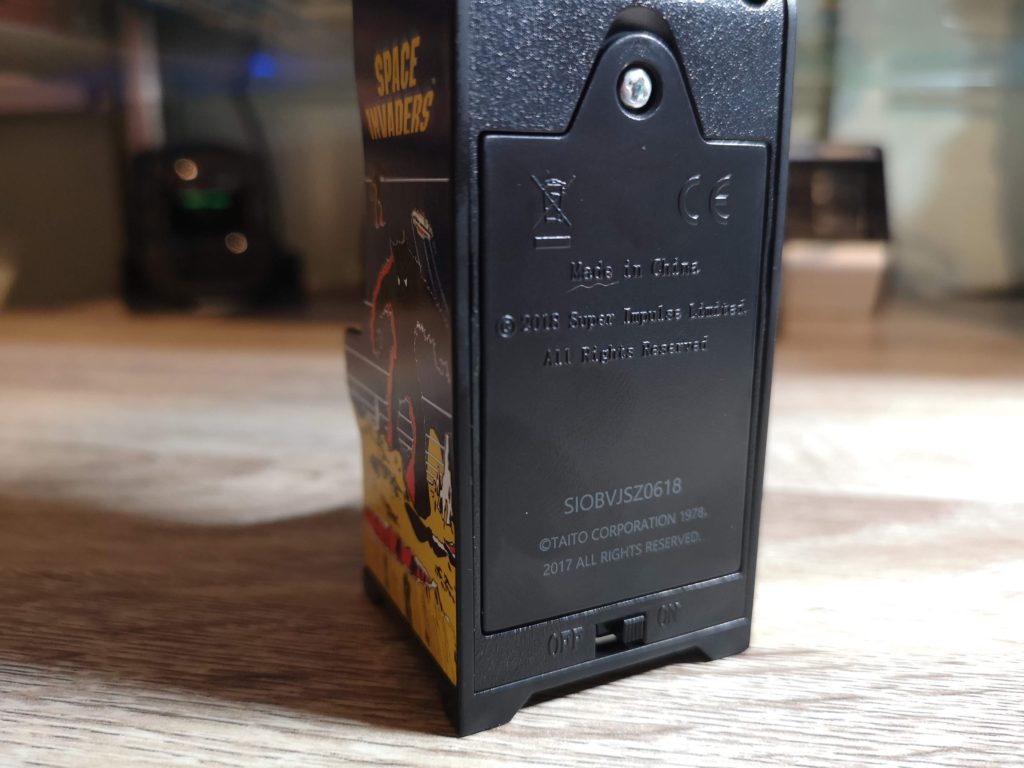 Back panel and battery compartment

By default the game ships in ‘demo’ mode so you need to turn the power off and back on again when you first open it. Doing this basically resets it, something I didn’t do at first, leaving it stuck in perpetual demo mode. Chalking that one up to one of those rare occasions when it actually pays to read the manual!

There is a key-chain on the rear of the cabinet, though why anyone would want to attach it to their keys is beyond me. Still, it doesn’t interfere with using the device and it isn’t visible when the device is on display so it’s not really an issue. If it really bothers you it could be removed easily enough by snipping through the metal attachment loop with some wire cutters.

Once it is turned on you’ll immediately notice just how good that little screen is. I’m not sure what sort of technology it is using, but whatever it is, it’s very clear and vibrant. A particularly nice feature I noticed was that the ‘Space Invaders’ sign above the screen lights up when it’s turned on. This really helps to recreate that authentic arcade cabinet appearance. 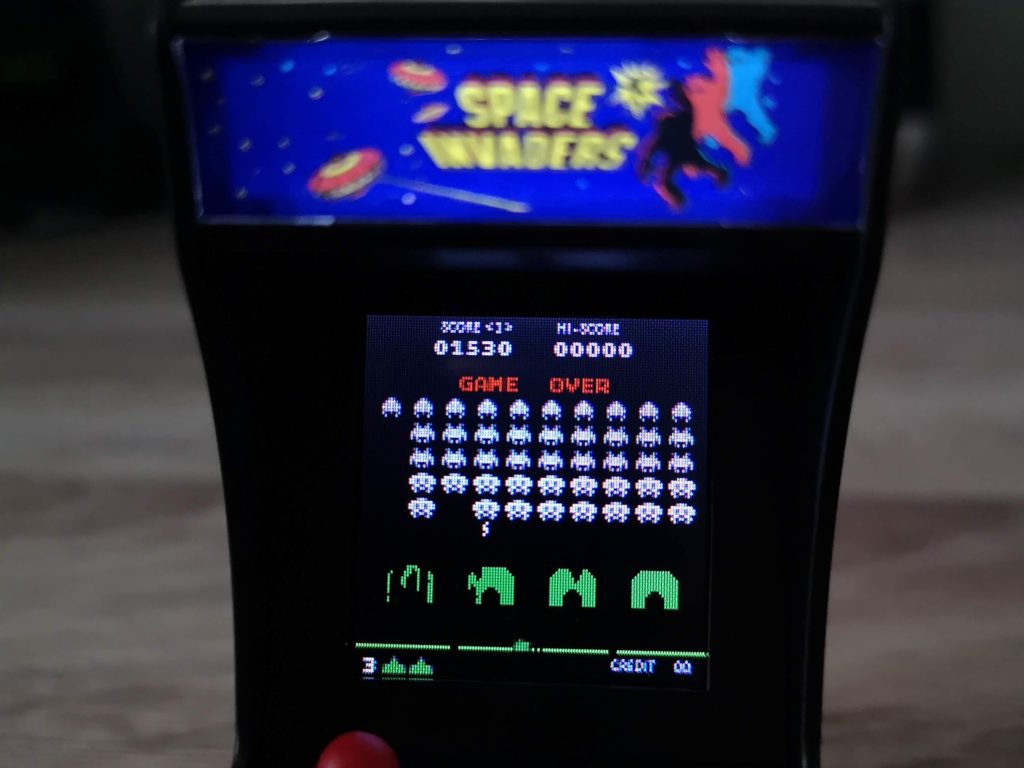 Screen is crisp, clear and vibrant

The sound also impressed me too, being both loud and clear with no distortion. One small criticism is that I couldn’t find a way to alter the volume or mute it. Thankfully it’s set to a sensible level and I didn’t really feel the need to change it. It might be an issue if you wanted to play it next to someone trying to sleep or watch TV though. 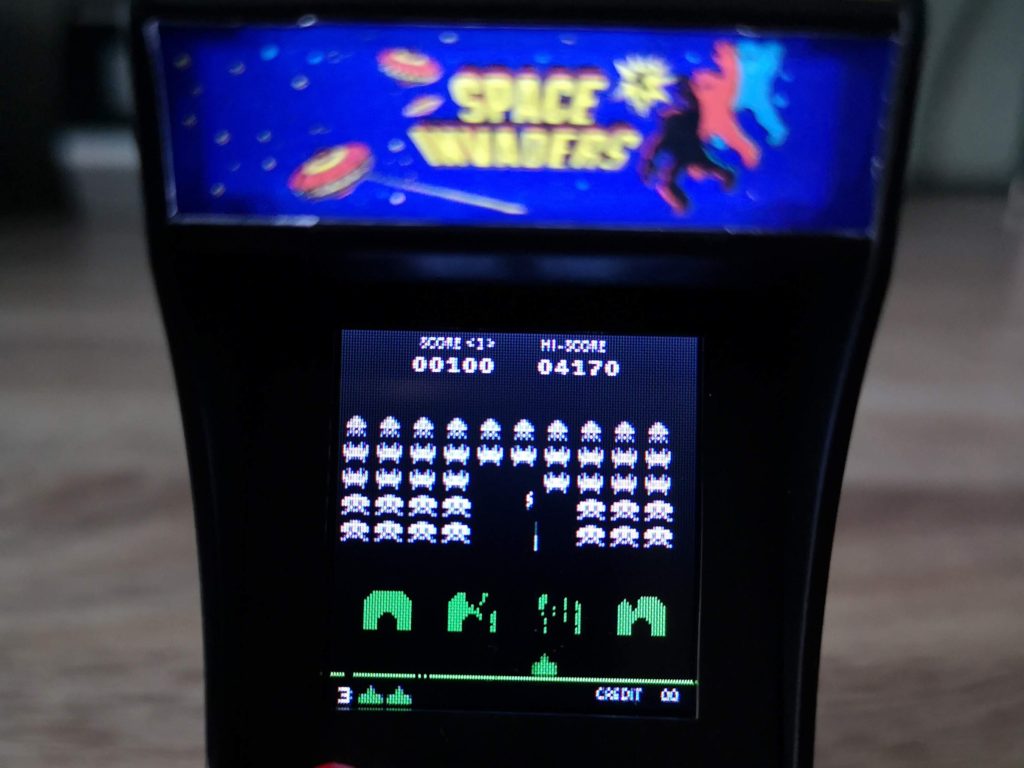 How does it play?

Incredibly well actually! It’s an extremely faithful version of the game we all know and love. Despite my large hands and the tiny joystick and fire buttons I was able to control my ship and fire away without an issue. My fingers didn’t block the screen either which was another thing I was concerned about. The screen is easy to see, even for me wearing varifocal glasses. As I mentioned earlier the game saves your high score so that urge to have ‘one more go’ to get a higher one is as strong as it ever was.

Here’s a couple of videos of it in action. They only show the demo running but should give you a good idea of how the game plays. The funny noises at the start of the first video are just Vector chirping away to himself, nothing to do with the game!

Absolutely. I’m no Space Invaders aficionado by any means but to me this seems like a pretty accurate replica of both the arcade cabinet and the game itself. Space Invaders was one of the first arcade games I ever played as child alongside Asteroids and Pacman. This little package really encapsulates that early 1980’s experience perfectly for me and all within a cabinet that fit’s in the palm of my hand!

There are a lot of copycat products that offer dozens, even hundreds of games but they rarely have the official games on them and tend to be full of rubbish clones. They certainly don’t have the game specific arcade cabinet designs like the Super Impulse ones do which is quite a big deal to me.

These little arcade cabinets retail for around £25 although occasionally pop up in sales for less. I got mine from Game (a physical shop in the UK) but you can get them online from Amazon and other places too.

Whether you buy it as a cool shelf ornament or to actually play on I think it’s a terrific little device and well worth the money. In fact I’m so impressed with it that I’ll be picking up some more of the range so I can build up a mini arcade of my own!