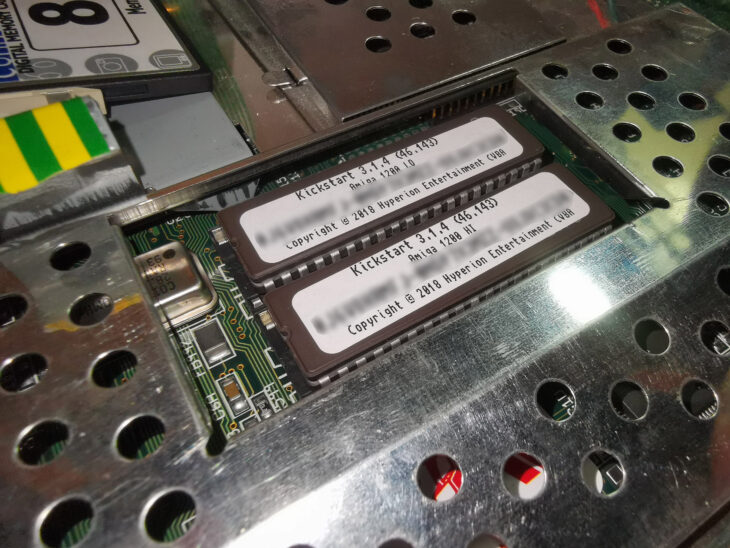 Having created the physical floppy disks in Part 1 of this guide it is now time to fit the IDE Compact Flash adapter and the 2 Kickstart 3.1.4 ROMS.

For this I needed to open up my A1200 to gain access to the mainboard. 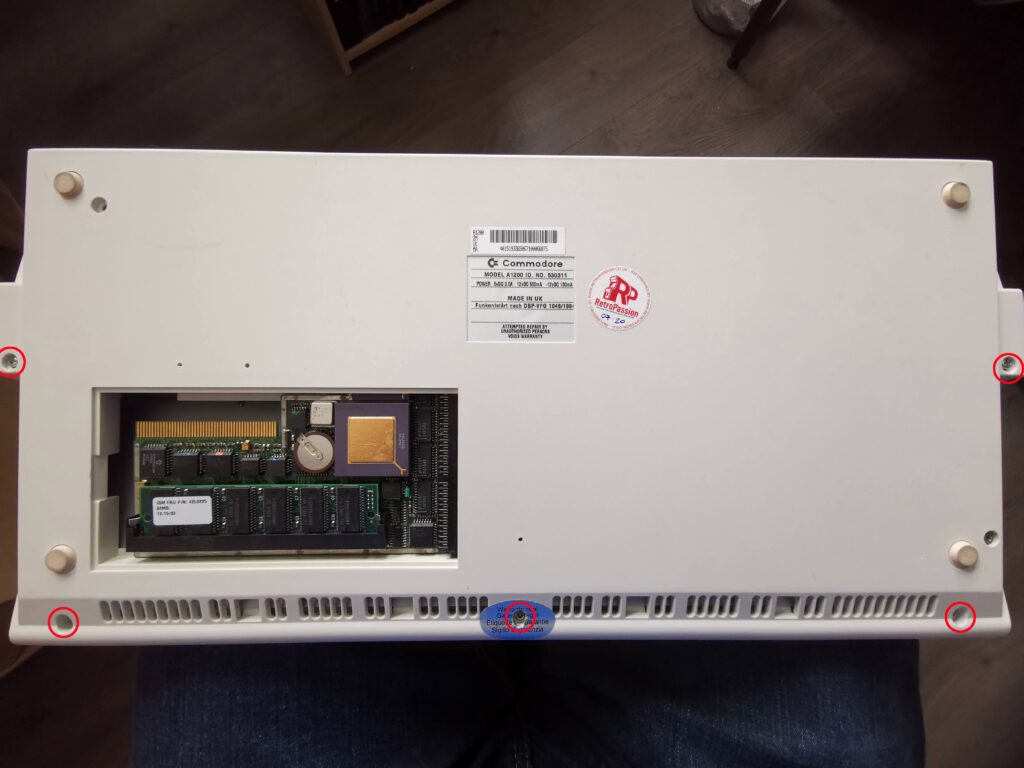 Location of the 5 case screws.

Removing the top half of my A1200’s case was just a matter of turning it over and removing five screws. I’ve circled their locations in the photo above. There were three along the front edge and one each side of the case. The two rear edges of the case are held together by some little lugs and recesses in the case itself. 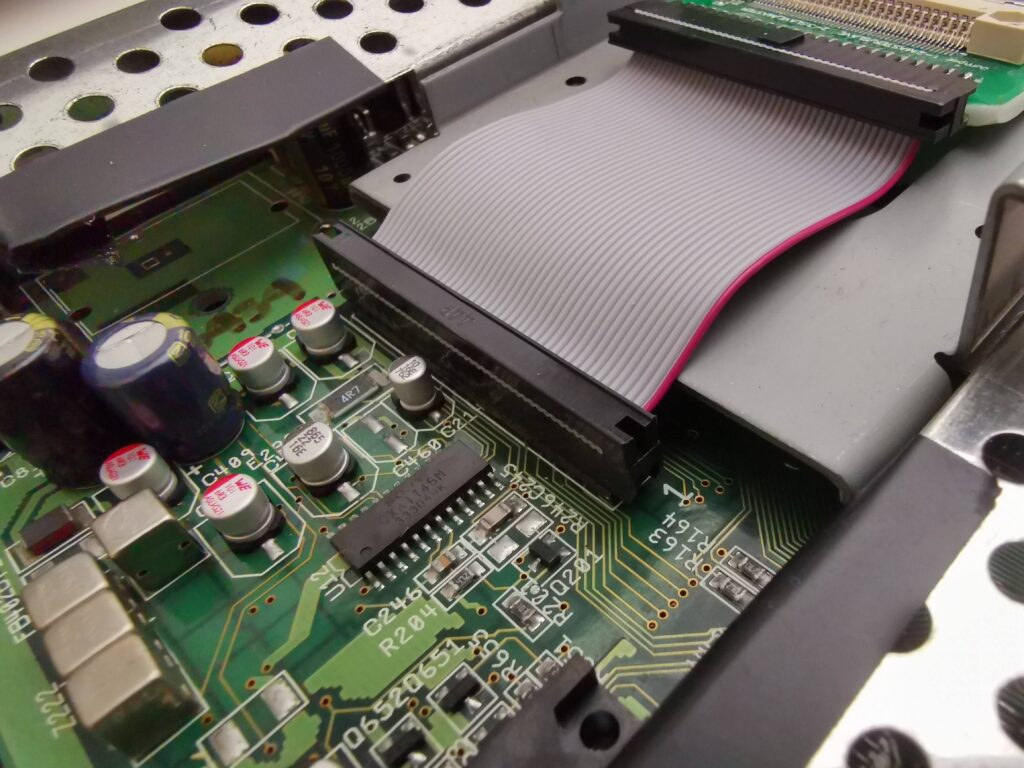 Pin 1 of ribbon cable aligned with pin 1 on mainboard.

Fitting the IDE Compact Flash adapter simply involved fitting the 44 pin cable connector to the IDE header on the board. Notice how the coloured strip of the ribbon cable aligns with PIN 1 on the board. I chose an 8GB CF card for my install as Workbench 3.1.4 now natively supports large drives. However a smaller card would work just as well. I think my original A1200 had an 80MB (yes I do mean Megabyte!) drive back in the 90’s so 8GB is an insane amount of storage! 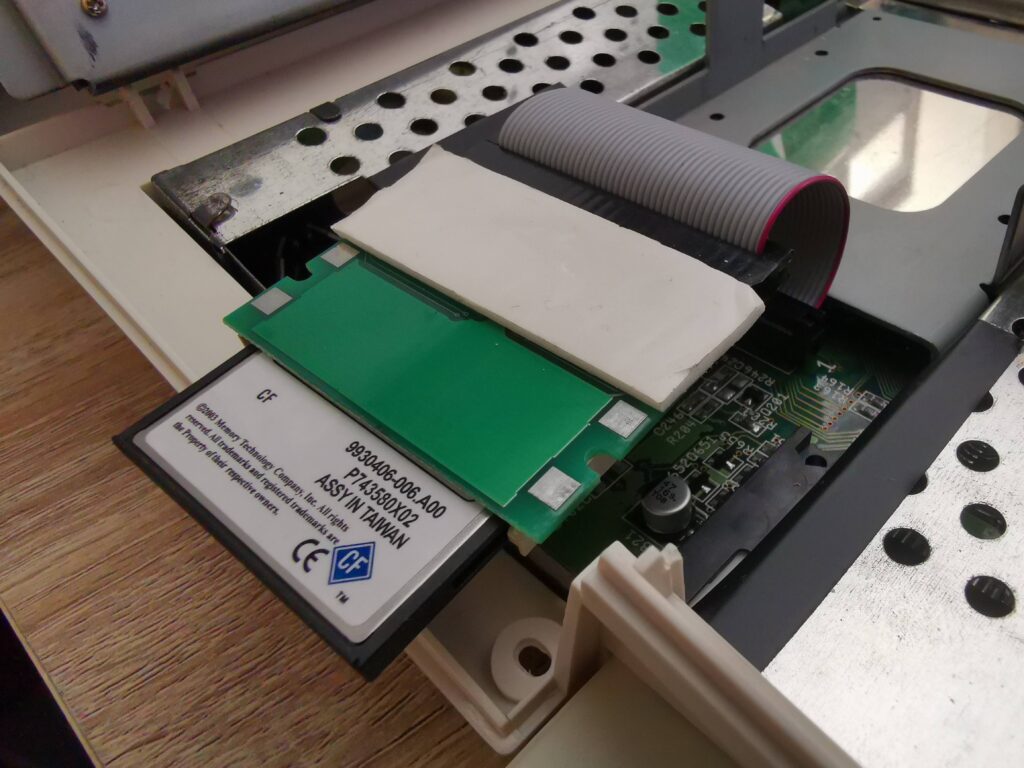 As the compact flash adapter has lots of solder pads on the base, I stuck a thick foam pad on the underside. This will ensure that the contacts don’t short out when sat on top of the metal drive bracket. (This drive bracket would have been used to house a 2.5″ IDE HDD back in the day). 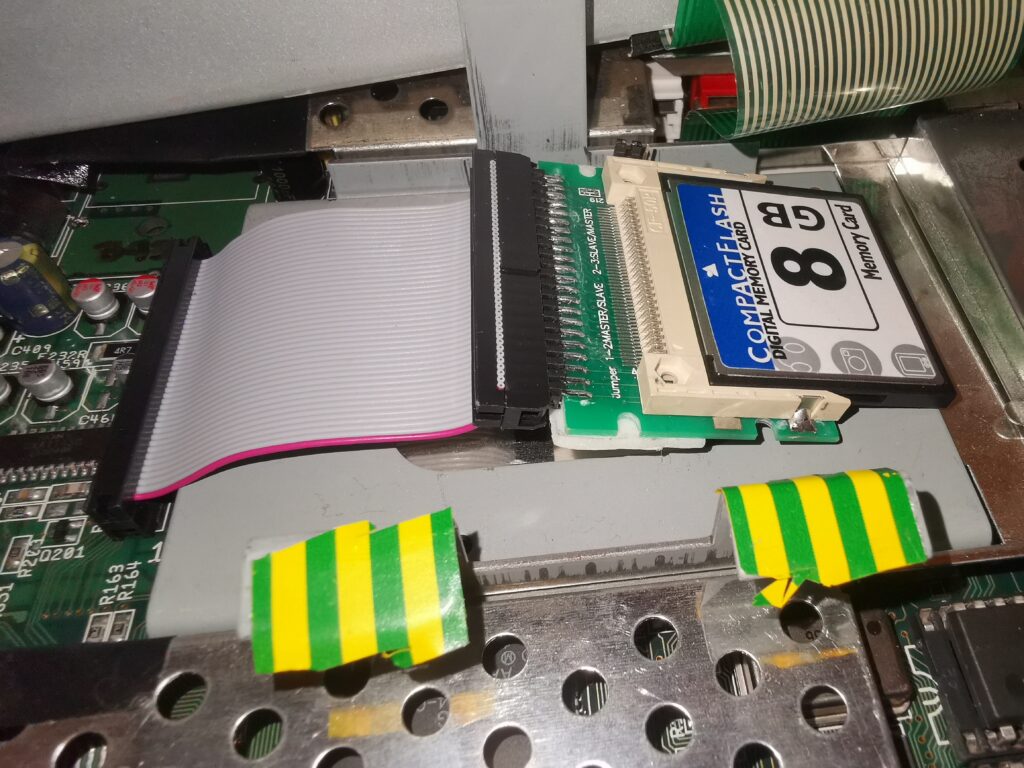 Luckily the Kickstart ROMS have their own little cut-out in the metal RF shielding so there is no need to remove the shield to access them. 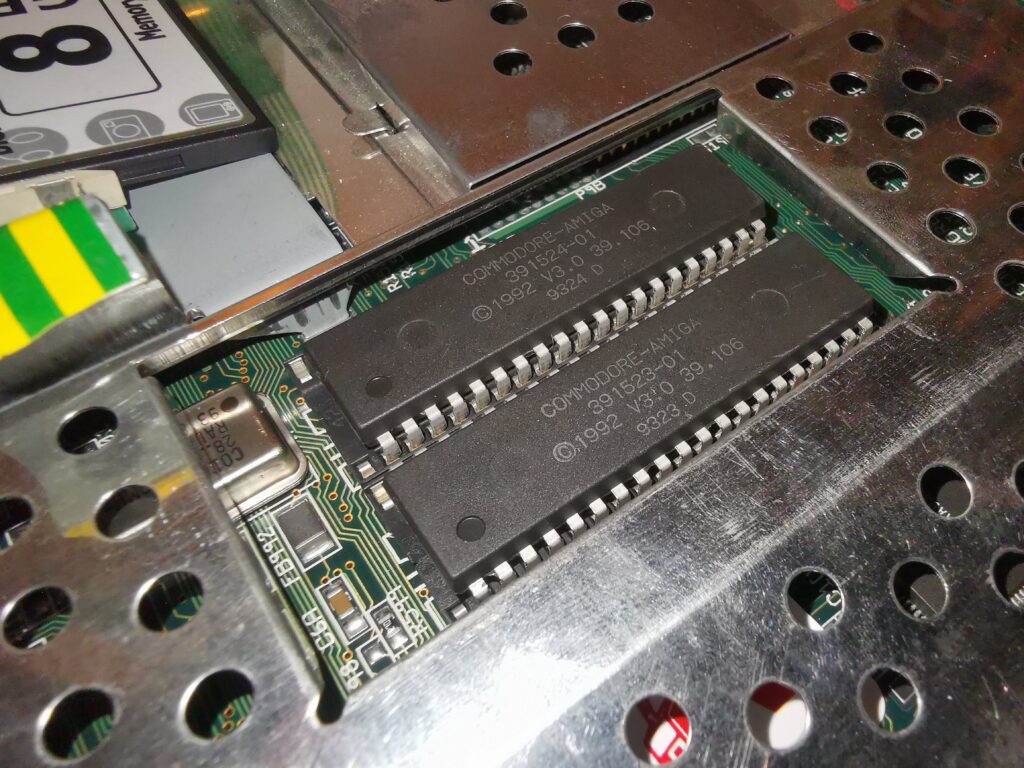 The original Kickstart 3.0 ROMs. Note the empty socket pins on the left!

I used my trusty chip puller to remove these, gently alternating pressure from one side to the other until they popped out. You could use a small flat bladed screwdriver to do this. Make sure to alternate from side to side, lifting the chips one millimetre at a time so you don’t bend the pins. If you want to make life even easier, use an old screwdriver and bend the blade 90′ at the end to make getting it under the chip easier. 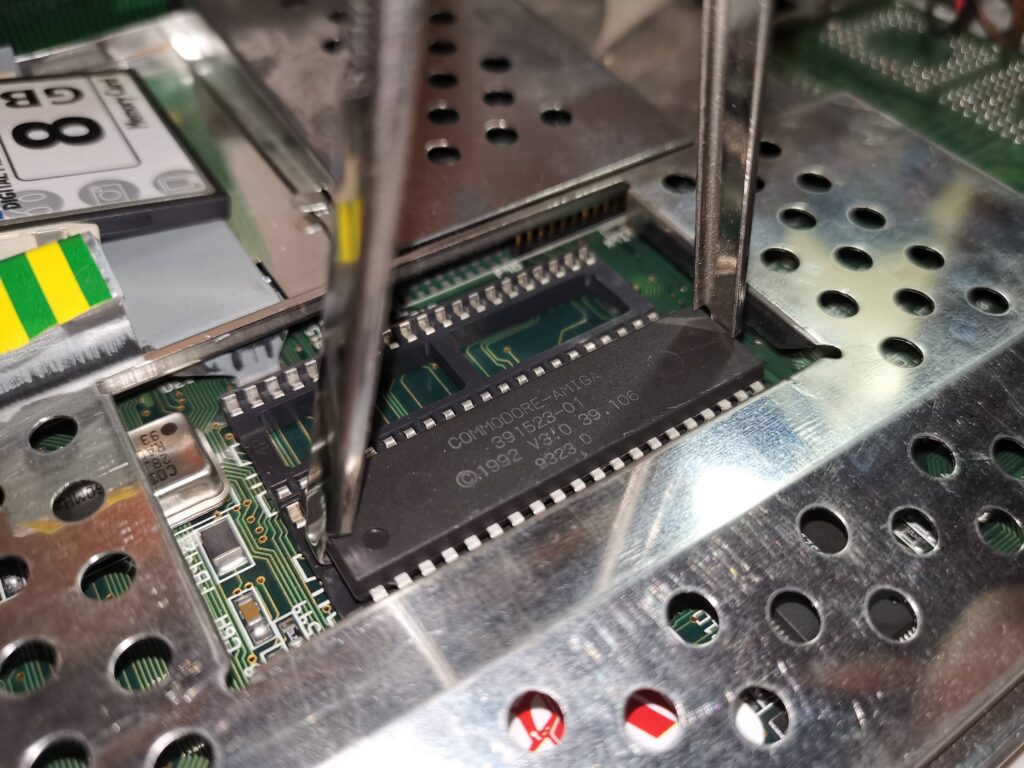 Pulling out the Kickstart 3.0 ROMS.

With the old ROMs removed it was time to fit the new ones. After making sure the pins would line up OK (they were splayed out a little too far) I began to fit them.

It’s vitally important they are fitted correctly and besides the usual static precautions there are three things to watch out for. 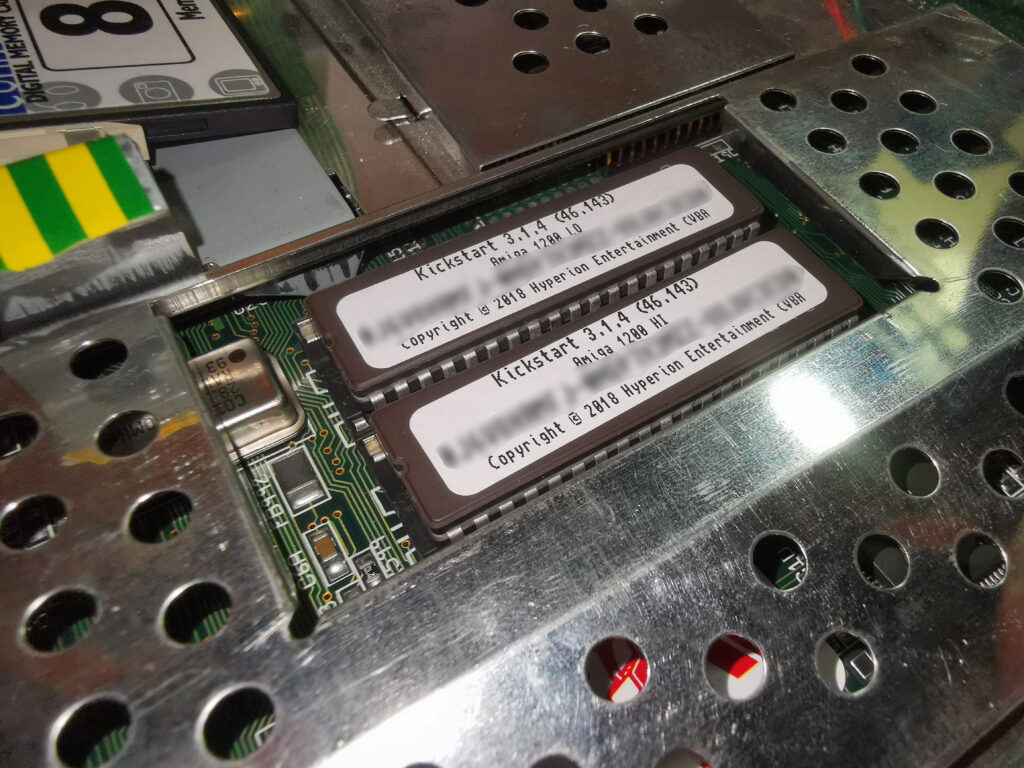 Thankfully testing the ROMS is pretty straightforward. Flicking on the power should display a brand new boot screen. That boing ball is definitely new! You can also see the updated ROM version and copyright message. 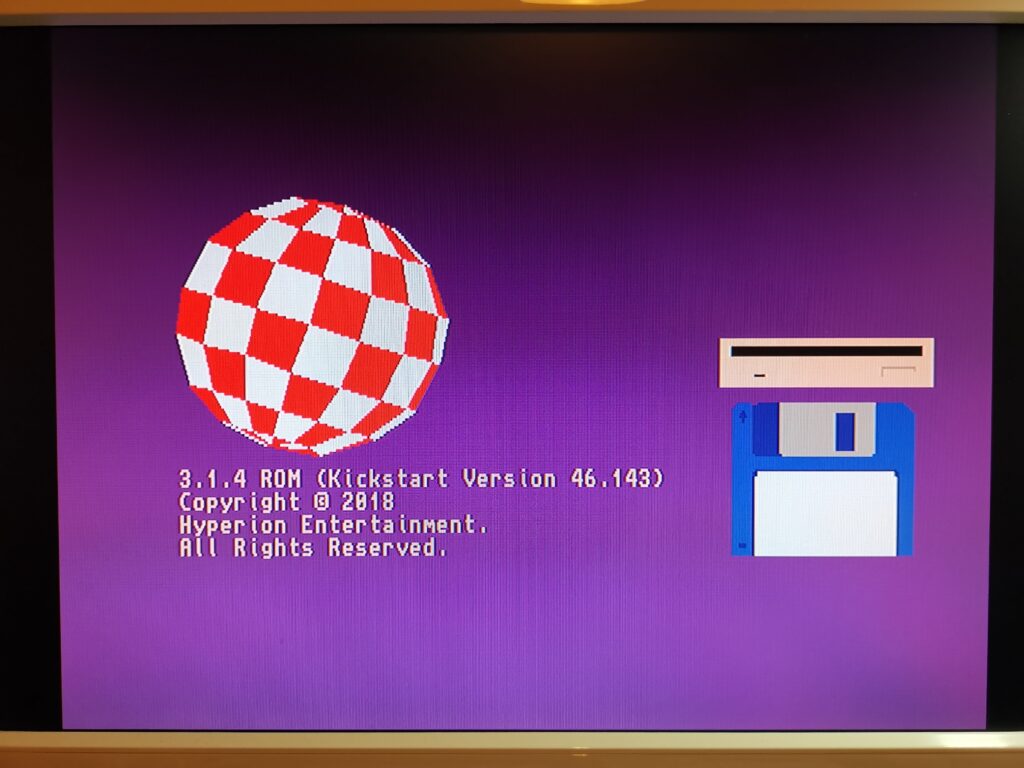 That concludes Part 2. In Part 3 I will deal with partitioning and formatting the Compact Flash card.