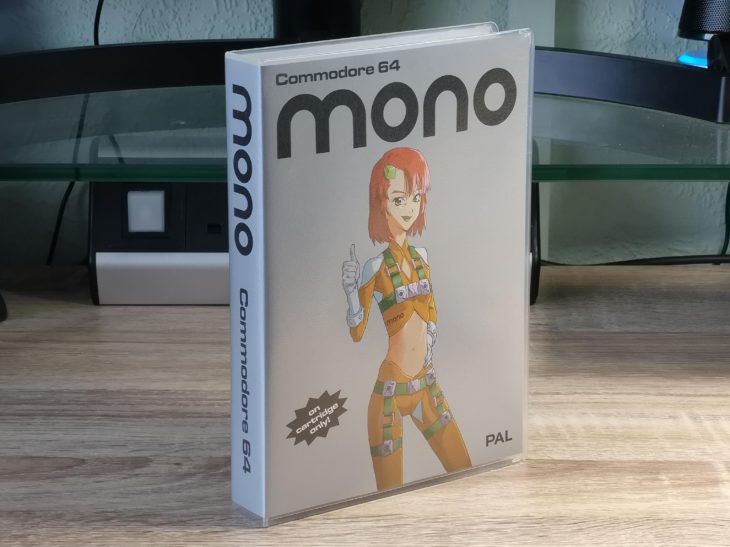 Mono is a brand new PAL game for the Commodore 64 created by a couple of guys in Switzerland, Clay Spoerri and Raphael Graf. It’s only available in cartridge format and costs €35 plus postage from their website. I bought this pretty much blind a few months ago as there was little information about it online. Sadly my first copy was faulty so had to be replaced (thanks Raphael) but the new one works perfectly so I thought I’d write a little review in case anyone else is interested in the game.

For your money you get a nicely designed plastic case with a cool manga inspired front cover featuring the pilot of your ship with some game screenshots and ship artwork on the back. 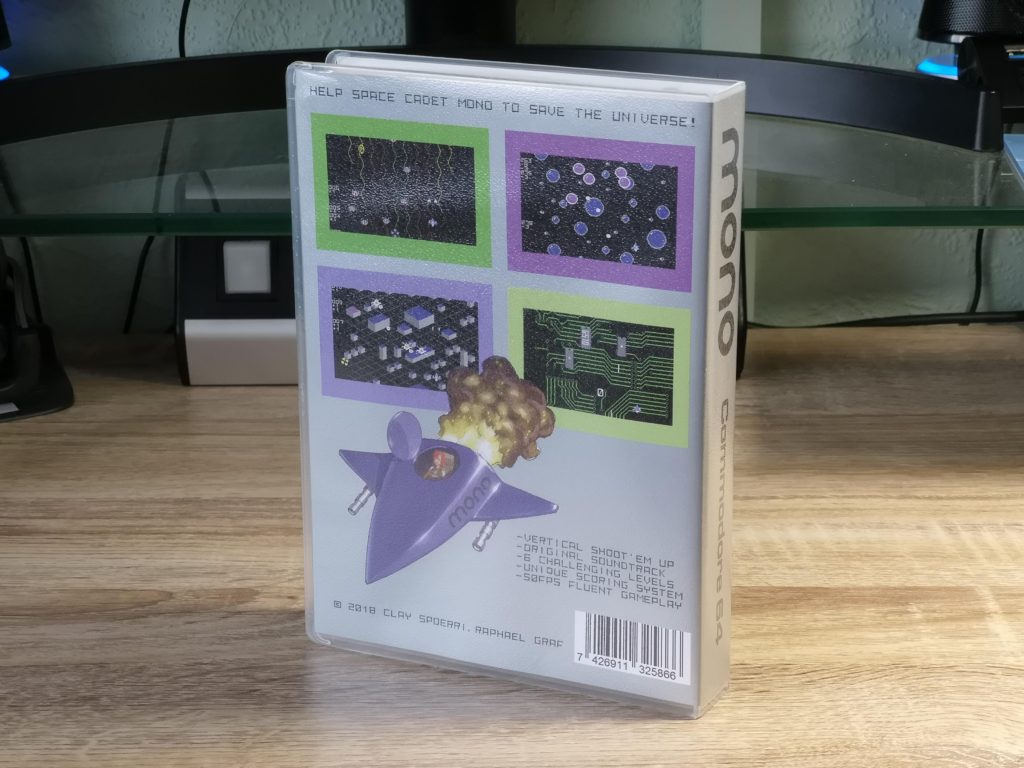 Inside the case you will find a sleek black cartridge with the title of the game etched onto it. The cartridge fits into the C64’s expansion port easily, unlike some other recent cartridges that required shoehorning in! You also get an instruction sheet, mono pin badge, a sticker, postcard and a beer mat/coaster. It should be noted that the latter three items all relate to other games, only the pin badge relates to mono. It’s only a minor complaint but I would have loved to see a sticker in the box of the girl or your ship instead. Also the cartridge is loose inside the case – a foam insert would have stopped it sliding around inside. 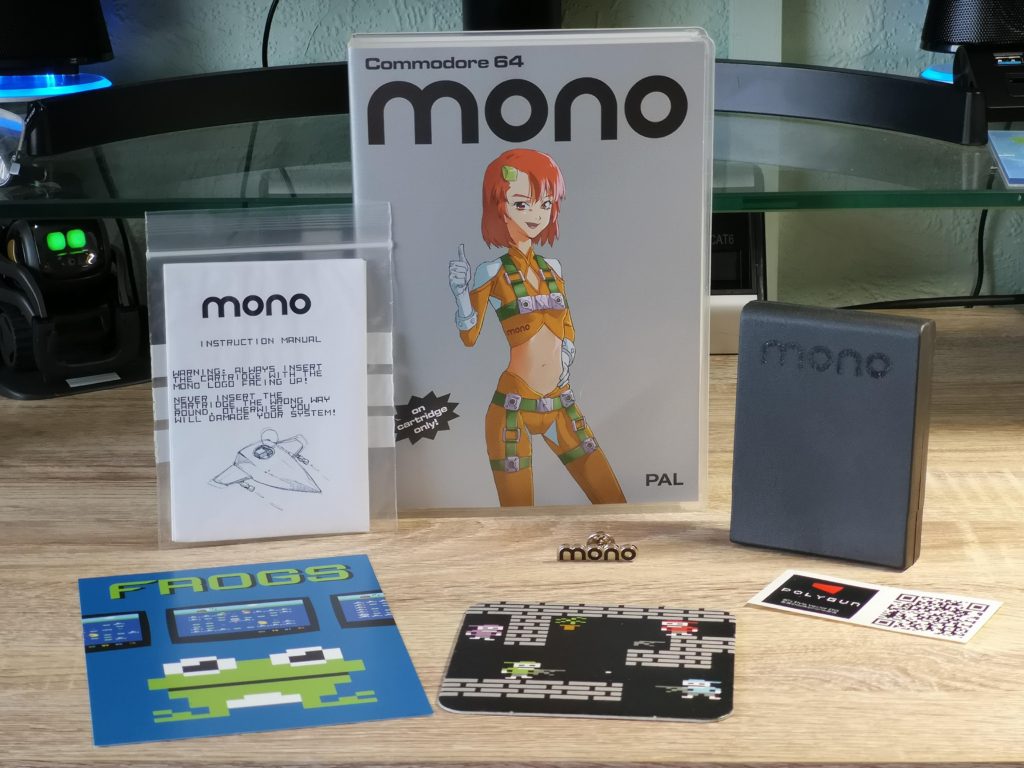 Mono is a vertically scrolling shoot ’em up that features a couple of fairly unique and pretty important gameplay elements that set it apart from similar games. Firstly your ship wraps around the edges of the screen. Move off the left side of the screen and you’ll reappear over on the right. Move off the top or bottom of the screen and you’ll reappear at the opposite end. Once you get used to this it’s actually a great gameplay enhancement and one that becomes essential with some of the bosses you’ll encounter later in the game. However it does take a few minutes to get used to and led to me dying on my first play-though. I kept accidentally moving off the bottom of the screen straight into the aliens spawning at the top!

The second unique feature is that your score and your ships life are one and the same. As you play you’ll notice a series of positive and negative numbers scrolling down the side of the screen. Kill an alien and a positive number will appear. Take a hit and a negative will appear instead. So long as you do more killing than getting hit you’ll be fine. However take too many hits and your score dwindles to zero leading to a ‘game over’.

Like many shoot ’em ups there are weapon power-ups to be had, but again these are linked to your score. Score well and power-ups will appear on screen for you to collect. However take some hits and you will lose your last power-up until you are back down to your standard issue guns. As soon as you start building that score back up the power-ups will start flowing again. 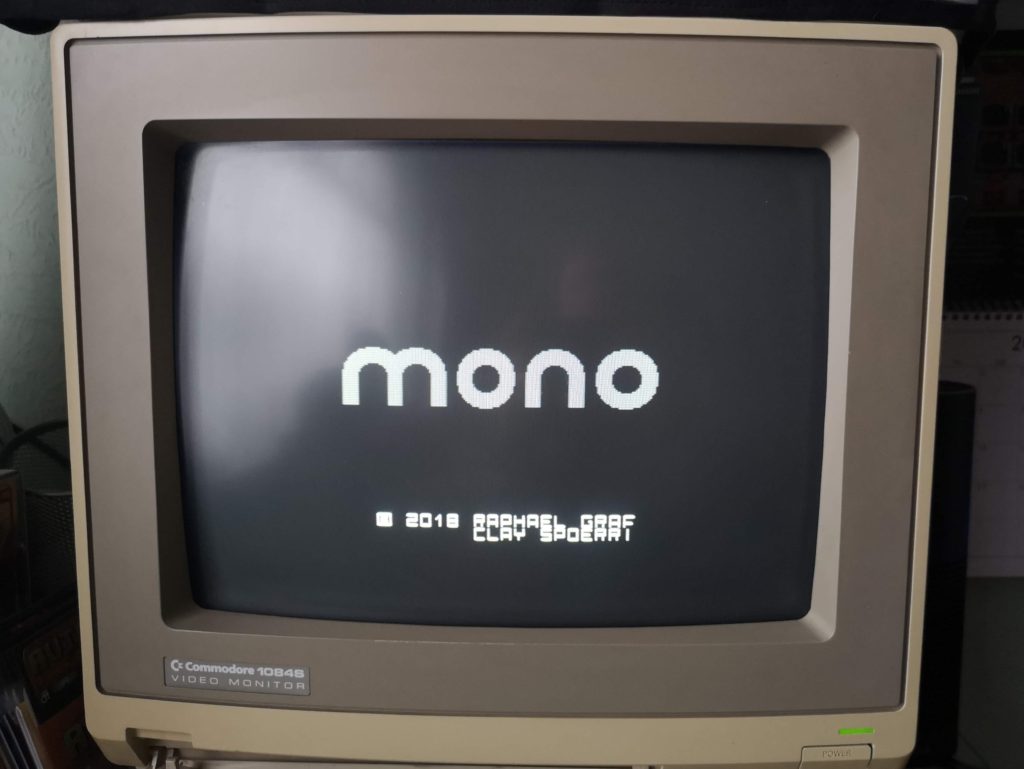 There are six levels in the game, each one themed differently with it’s own colour scheme, music, background, enemies and boss. The backdrops scroll down the screen smoothly but are pretty simply affairs, based around various shapes or patterns – bubbles, lines, pyramids, blocks and even a circuit board (populated by 6510 chips!).

The alien designs are also pretty simple but they’re nice and clear and each feature unique move and firing patterns. Some of the bullets fired home in on your position too which makes for some tricky situations if you don’t take the enemies out quickly enough. There is some overlap of enemy use from one level to the next but the game adds new enemies to each new level to mix things up.

Every level culminates in a boss fight where a group of bullet sponge enemies appear for you to take down before you can progress onto the next level. I found it was during these segments of the game that the screen wrapping feature came into its own, allowing you to stay literally one step ahead of the enemy, out of their line of fire, whilst chipping away at their health.

You can play Mono using either the keyboard or a standard joystick which is the option I chose to go with. My thumb also appreciated the fact that your ship auto-fires. No need get cramp stabbing away at that fire button like a madman!

One thing that I have to mention here relates to the game difficulty and length. Those 6 levels are quite short, taking maybe 2-3 minutes to complete each. They’re also pretty easy to get through too as the score-life mechanic is very forgiving. To put this into perspective I was able to beat the game on my second play-though in around 15 minutes and that includes brief interludes where I was taking photos for this review!

I’m guessing that is a feature rather than an issue though. For me it seems the game is built around replaying it and trying to improve on that high score as you learn the move sets of the enemies and best ways to take them out without getting hit.

Mono has some great music playing throughout the game and it changes slightly for each new level. There are no sound effects at all in the game because all the SID’s voices are being utilised to produce the soundtrack. However this is no bad thing, at least to my ears as I really enjoyed the music. 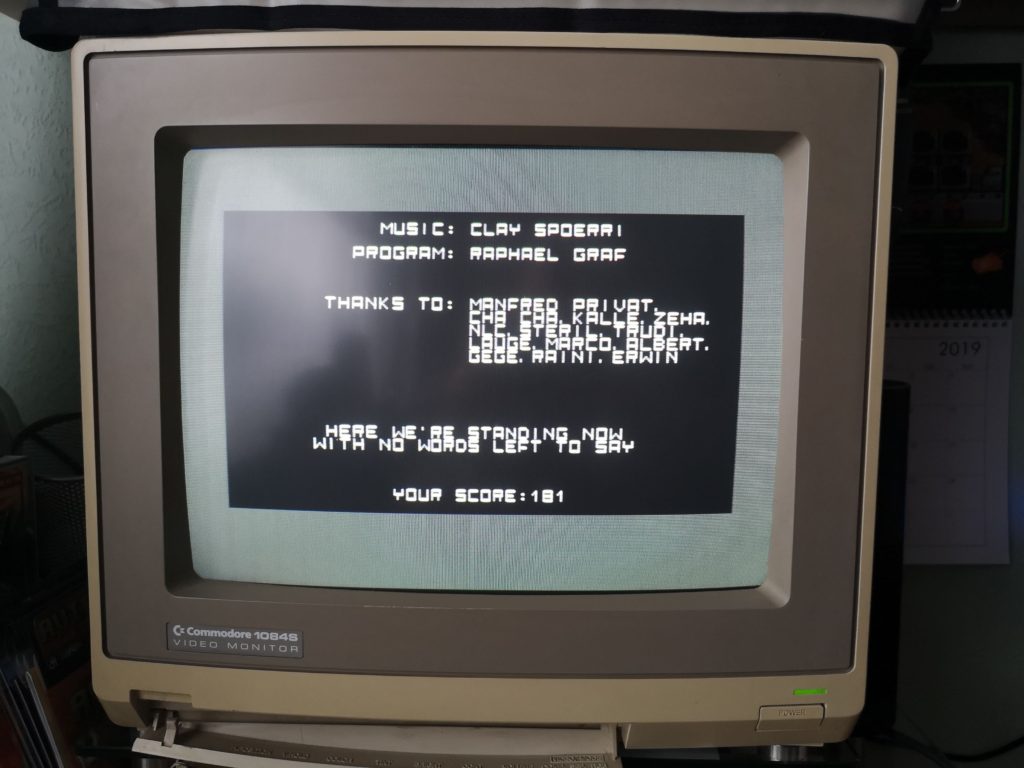 I realise that for some, €35 for a game that can be bested in 15 minutes may not be perceived as value for money. If so you’ll need to way up the pros and cons I’ve mentioned already in order to decide if this game is for you. Sadly there is no digital purchase available so it’s the Cartridge version or nothing I’m afraid.

Speaking for myself I’ve really enjoyed my time playing Mono, although the graphics are a little simplistic the gameplay is tight and rewarding and the music is terrific. The physical packaging is fantastic and looks great on my shelf. I’ll definitely be replaying it often to improve my score and it’s the perfect game to play if you’re limited on time… you know from the outset that a game will never last more than 15 minutes!

I think the price is quite fair too and on a par with the majority of other cartridge releases so all things considered it gets a recommended from me. 🙂