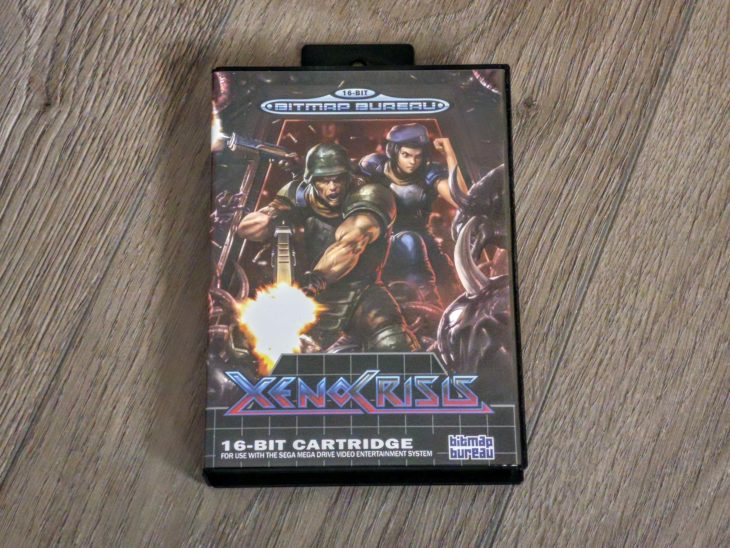 Xeno Crisis, a brand new Sega Mega Drive game – on a cart no less – is finally here! It’s been almost exactly two years since I originally backed it and a year beyond it’s originally projected completion time. In fact this had long been the second oldest unfulfilled pledge on my Kickstarter account. (The oldest being Xydonia which I backed way back in 2016, now two years behind schedule). But now it’s here in the flesh all that waiting has finally paid off.

Just like with Tanglewood, the moment I saw the Xeno Crisis project on Kickstarter I backed it instantly. I have a huge soft spot for the Mega Drive even if it was a direct competitor to the Amiga.

The game arrived yesterday in a pretty nondescript cardboard box. As soon as I saw the name ‘Bitmap Bureau’ on the address label I was pretty sure what would be inside and I was not disappointed.

Just like Tanglewood, Bitmap Bureau has taken the safe option of not slapping a Sega Mega Drive logo on the cover. However what they have done instead is create an almost identical logo with their own name in it. Basically the box looks exactly how you would expect any self respecting 90’s Mega Drive game to appear, even down to the retail hanger on the top.

Opening the case up reveals the cartridge in all its glory along with a beautifully made full colour instruction manual.

The 20 page booklet starts out by setting the scene and then shows the two control schemes on offer for 3 and 6-button controllers. It then goes on to portray some of the enemies you will encounter along with weapons, equipment and pick-ups you will come across. Finally it describes the different areas you will explore, the hostages you need to set free and some advanced playing tips. Pretty essential reading really and it’s packed with colourful in-game images that makes it a pleasure to read. If only all games still came with manuals like this!

Although I own an original Sega Mega Drive and Mega Drive II console, the console I actually use most of the time is an AtGames Flashback HD. I know these AtGames clones get a lot of stick online but personally I think it’s a great piece of kit for the money, especially for a casual owner like myself. It has super crisp HDMI out, wireless pads, a proper cartridge slot and it also allows game save states which are a godsend these days. I do occasionally experience the odd minor sound glitch or stutter in some games but never anything that spoils my enjoyment. 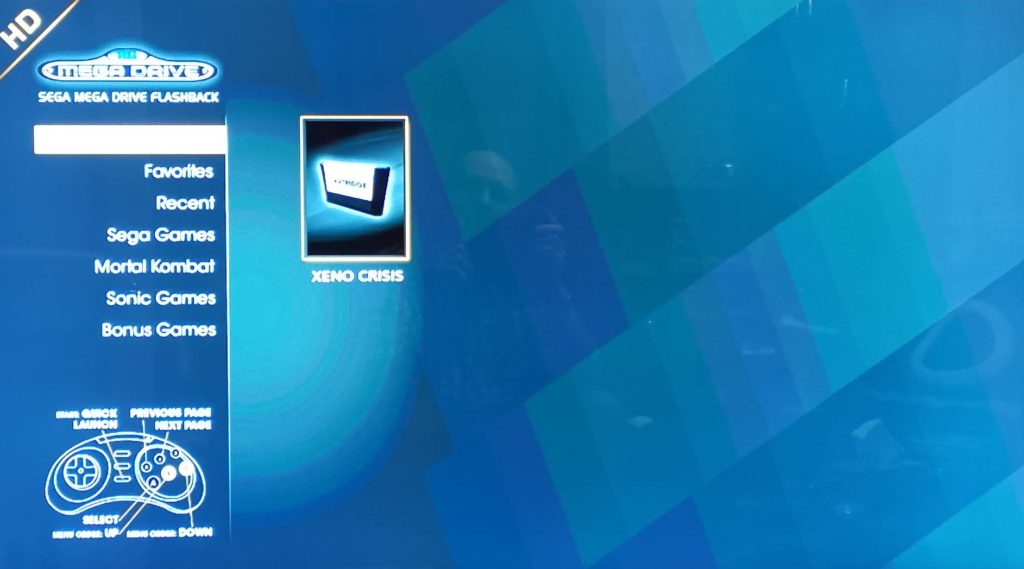 I remember reading a blog post about how they extensively tested Xeno Crisis on this system and many other clones. I’m happy to report that it has performed flawlessly so far. I’m actually thinking about buying an Analogue Mega Sg in the not too distant future so it’s good to know the game has been tested on a wide variety of both old and new hardware.

On first starting the game you’re presented with a cool little intro that features a number of static images with some text that rolls in along the bottom helping to set the scene. The story, in a nutshell, is that you’ve received a distress call from a research facility on Io after an alien attack. It’s your job to rescue survivors and deal with the alien threat.

After the intro you reach the title screen from where you can select a 1 or 2 player game, access the options and select your character. The game defaults to ‘Hard’ difficulty but I found this to be too punishing and quickly swallowed my pride and stuck it on ‘Easy’. You can easily tell what difficulty is selected as the entire title screen changes colour. Red for Hard and Green for Easy – a nice touch.

Once you’ve made your selections it’s on to the game proper. It starts very dramatically with your dropship briefly touching down in front of the airlock before leaving you all alone to carry out your mission. This is all slickly animated in a style that you only get on a 16-bit machine. It’s very well done and really gets you pumped for the mission ahead. 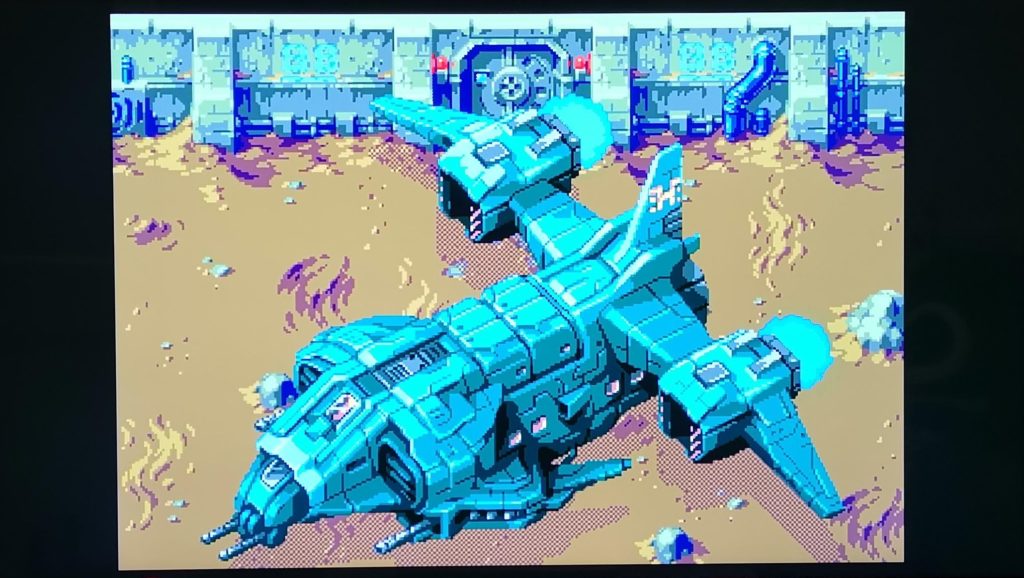 The Dropship landing on Io

This game is basically a proper old-school arena shoot em up. Each room or arena is randomly selected so each play through will be slightly different. Once you enter the first room there will be a number of enemies to despatch before an exit will appear and you can move onto the next. Occasionally more than one exit will appear giving you a choice of where to go. 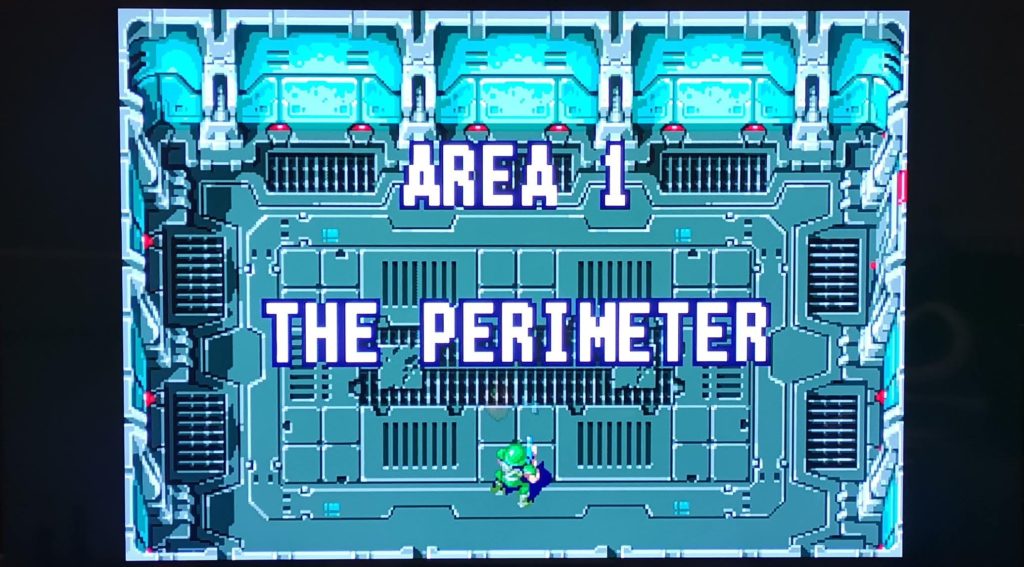 The controls do take a little bit of getting used to. It’s what we would now call a ‘twin stick shooter’ with one stick controlling movement and another controlling the direction in which you shoot. However the Sega controllers only have one D-pad so a compromise has to be made. Basically the D-pad moves your character around while the ABXY buttons control your 8-way firing direction. Additionally you can also use C to do an evasive roll and Z to chuck a grenade. Finally you can use the mode button to discard your current weapon pick-up in case it’s not suited for the job in hand. This returns you to your default assault rifle.

I found the 8-way firing using the ABXY buttons took a lot of getting used to. This lead to a lot of unnecessary deaths whilst I was fumbling to press the correct directional button. You can play the game on a 3 button controller too but I don’t own one so have been unable to test how it plays with this type of pad. 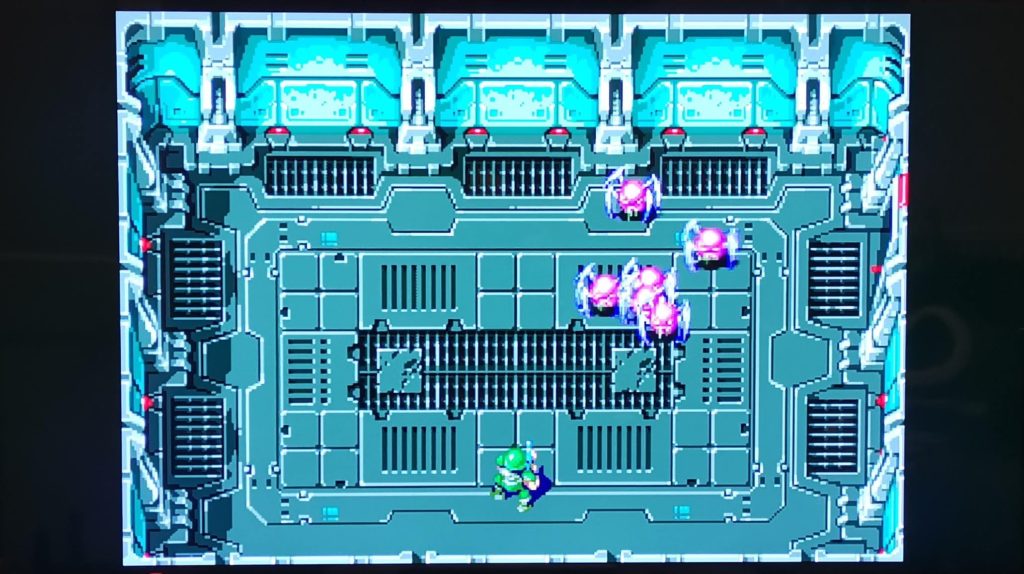 There’s a wide variety of enemies to tackle with some shuffling around slowly while others home in on your position. Some remain stationary and will either act as a gun turret or explode if you get too close. Others will just burst through the floor unexpectedly and try to shoot you. You simply can’t afford to stay still at all and need to constantly be on the lookout for new enemies appearing from all sides of the screen.

Your standard assault rifle has a very limited ammo supply so if you constantly spray bullets everywhere you will quickly run out. You also have a very limited supply of grenades that you can use to get out of a tight spot. Thankfully ammo crates appear at random locations on the screen and you need to ensure you get to them as soon as possible. Occasionally a new weapon will appear and if you manage to pick it up it will give you increased fire-power and unlimited ammo for around 20 seconds. There are 10 different weapons in the game including lasers, shotguns, flame-throwers and even a BFG.

Sometimes you will encounter a room with hostages in – you free them by walking up to them and bag yourself a bonus for doing so. There are also a variety of pick-ups that can improve your chances of survival. These range from things like med-kits and ammo to security cards to open doors and dog-tags. Dog-tags are a form of currency which you can spend at the end of each stage to upgrade your gear. Upgrades include health boosts, weapon power-up’s, increased ammo capacity, speed-ups (to run faster and roll further), a gas mask and finally an Elixir which is basically an extra ‘continue’. 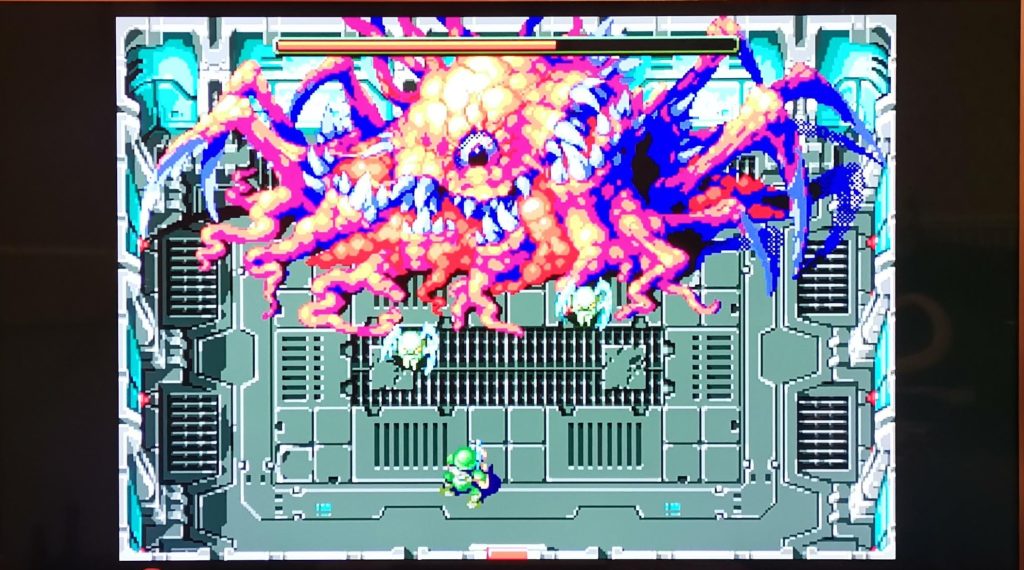 There are 7 different areas in the game including ‘The Perimeter’ where you start plus a forest and lab area and several more. Each area has a distinct graphical style and enemy type so it’s always exciting to see what the next area has in store for you.

An area consists of several interconnecting rooms. Once you’ve cleared enough rooms you will face a boss fight. These are suitability epic battles with impressive full-screen animated monsters that need blasting to smithereens. There will usually be waves of additional smaller enemies to deal with as well so expect to die frequently until you’ve worked out the best strategy to deal with them. 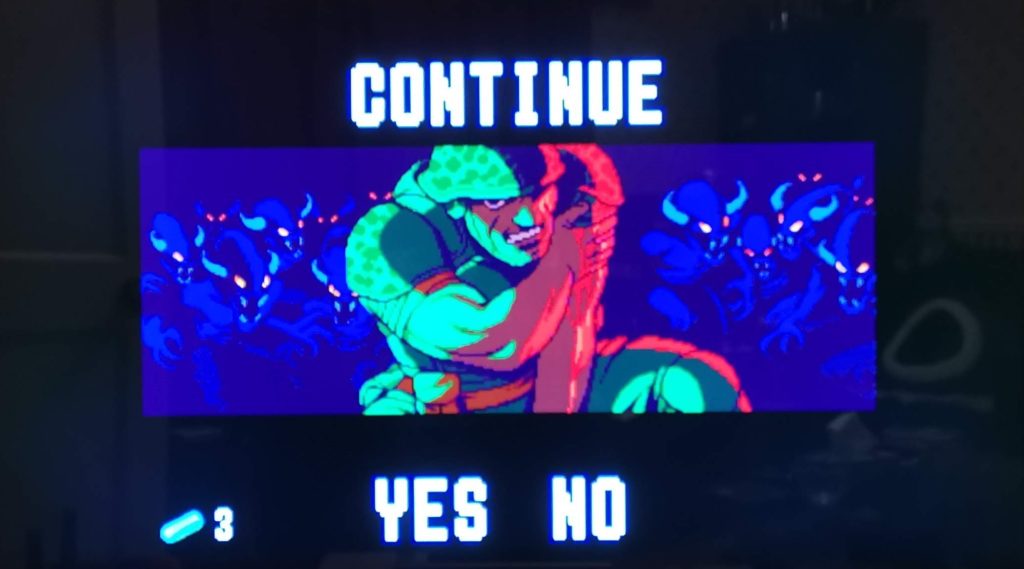 Continues use up your Elixir’s

When you die you get the option to continue from where you left off by using one of the 3 elixirs you started out with. You can buy additional elixirs after clearing a stage by spending dog-tags though they are quite pricey. Alternatively you can spend the tags on better weapons and more health making death less likely in the first place. Decisions, decisions. 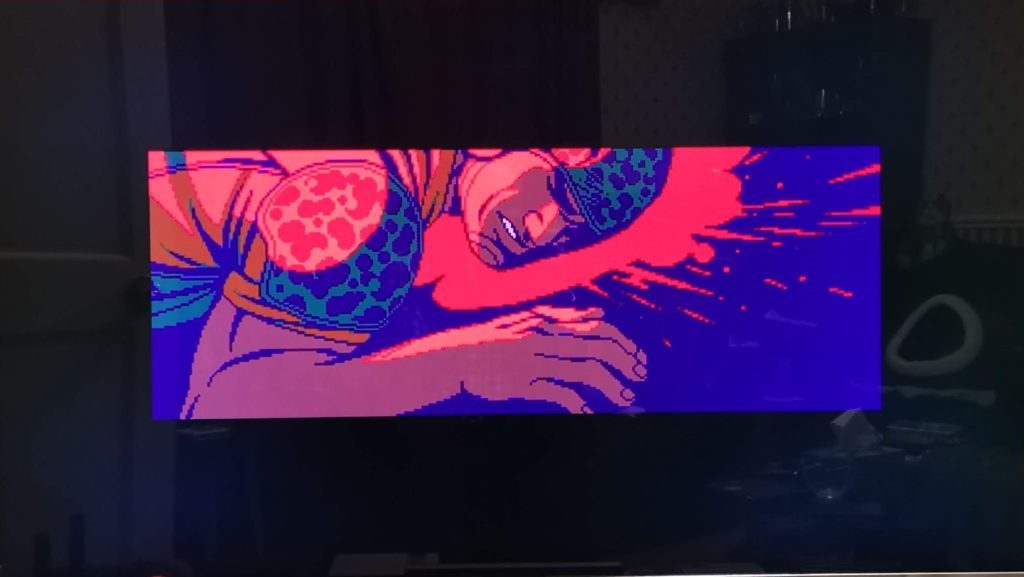 I’ve not had the game long enough to finish it yet but everything I’ve witnessed so far during my play-throughs has been terrific. The graphics are superb and easily rank amongst the best I’ve seen on the Mega Drive. The main character is very detailed and has plenty of animations bringing them to life. Likewise there is a diverse range of enemy types and they are all superbly realised in-game. The variety of guns is equally impressive and they have suitably meaty sound effects to accompany them.

The thumping soundtrack is also exceptionally good and again is amongst the best on the system and suits the game perfectly. I received the digital soundtrack with the game and it’s well worth a play, especially if you like Chip/Synthwave music.

It’s not an easy game, even when played in ‘easy’ mode, there’s so much going on and so many buttons to use that it can often feel a little overwhelming at first. However once you’ve put some time in you can feel yourself improving and you get a little further on each play through. Basically you need to ‘git gud’ as they say these days.

The overall presentation in general is of an extremely high quality indeed and it’s abundantly clear that this has been a labour of love from start to finish. Xeno Crisis is a superb game and I have no hesitation in recommending this to any retro gaming enthusiast and I would consider this an essential purchase if you’re a Mega Drive fan.

Hopefully the success of both Xeno Crisis and Tanglewood will be enough to spur other developers on to create more new physical cartridge releases for the Mega Drive. I certainly hope so anyway and look forward to what the future may bring.