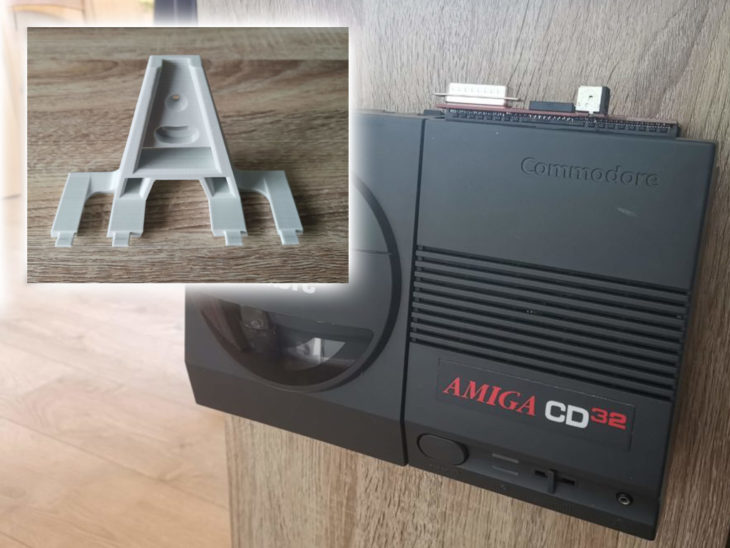 I was browsing around AmiBay one day when I stumbled across a guy selling stands/brackets that you can use to display Commodore equipment with. His stand for the CD32 caught my eye and was pretty cheap (€12.50) so I thought it was well worth a punt. The stands are made in Italy and delivery to the UK took less than a week.

The stand itself is 3D printed and is finished to a very hight standard. It’s also incredibly strong unlike many 3D printed objects thanks to some sort of exotic ‘ngen’ plastic used in its construction. The end result is a very attractive and sturdy stand that is available in three different colours. Champagne Gold, Clear Grey and my choice, Light Grey.

How it fits the CD32

The stand features four prongs along the bottom that hook into the slots under the front lip of the CD32. A gently sloped back means your CD32 is held at an angle ensuring it won’t tip forward. There stand also incorporates a couple of holes so it can be mounted on a vertical surface. 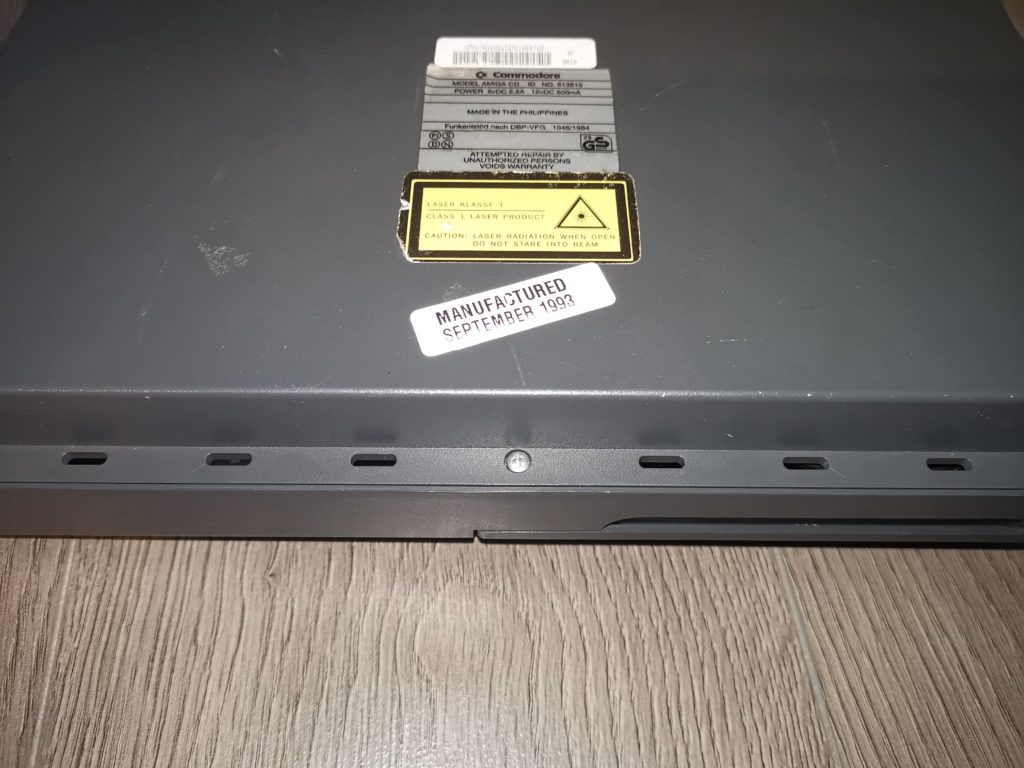 Here are the slots that the prongs of the stand fit into. 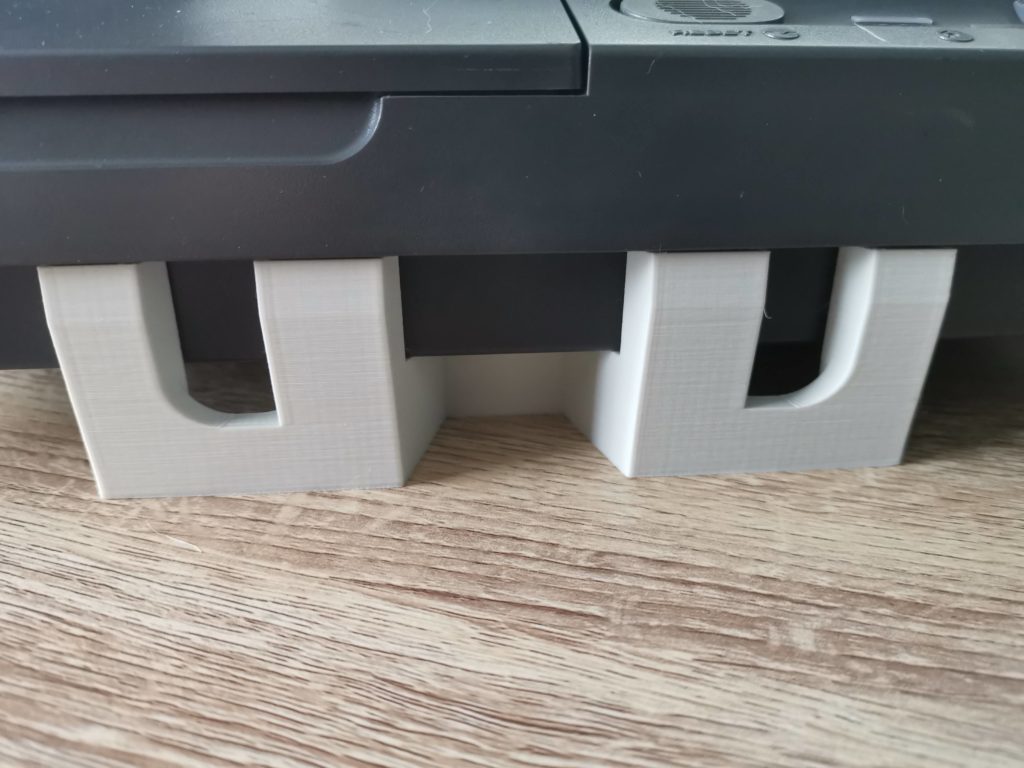 Here you can see the prongs securely located into the slots.

Use as a Display Stand

The design of the stand allows it to be used in two different ways. The most straightforward is as a simple shelf stand to display your console on, as you can see in the photos below. This works really well and if you have the space is a great way to show off your kit. 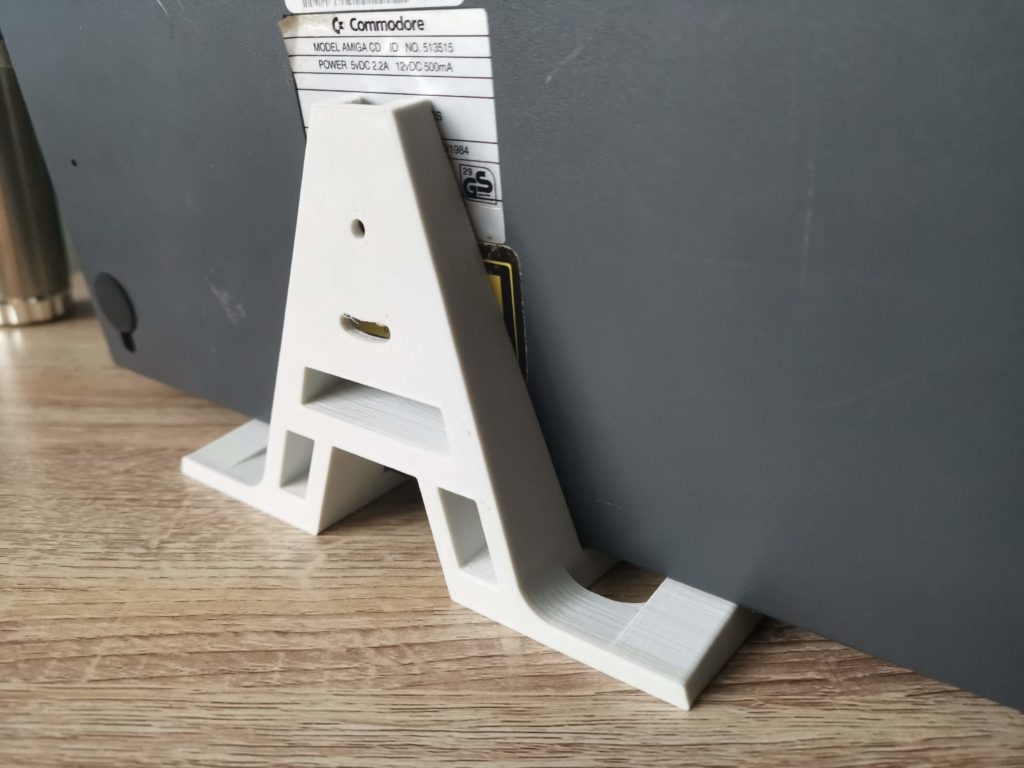 CD32 ‘Display’ Stand – seen from behind. 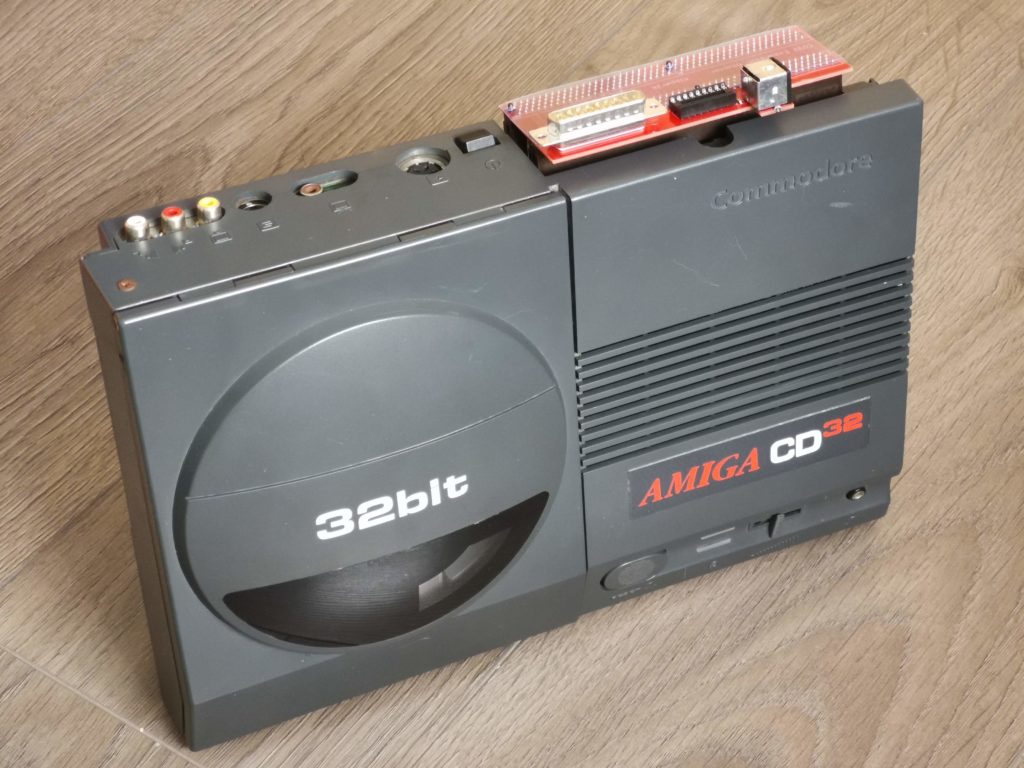 CD32 ‘Display’ Stand – seen from the front. Hard to tell from the photo but it’s leaning back so there’s no danger of it falling over.

Use as Wall Bracket

The other way of using it, and the reason I bought it in the first place, is as a wall bracket. Used this way you can actually gain a little bit of extra space in your man cave. This is because when affixed to a wall or other vertical surface your CD32 no longer needs shelf or cupboard space. As an added bonus it looks awesome whilst stored this way too! 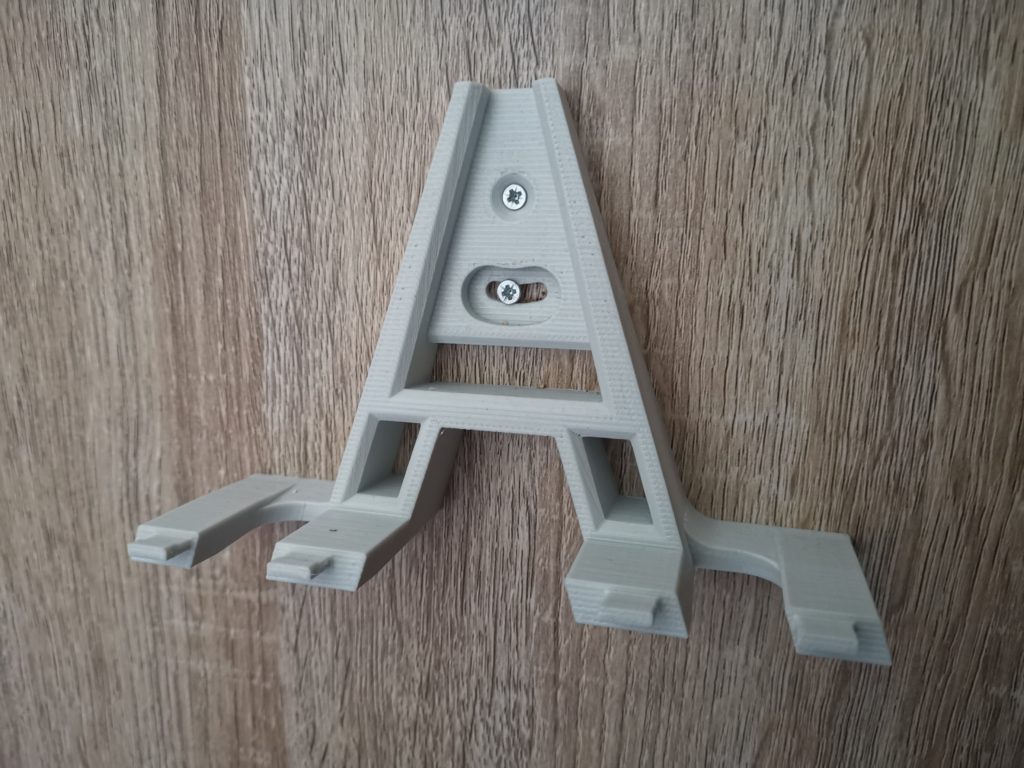 Here you can see the stand/bracket securely attached to the side of my computer desk. The curved screw slot allows easy alignment/levelling.

There are two screw holes used to mount the stand/bracket vertically. You put the first screw in the top hole as normal. The next screw goes through the curved slot below which allows the bracket to pivot left and right so you can align it. Get the bracket level and then tighten both screws and bob’s your uncle! 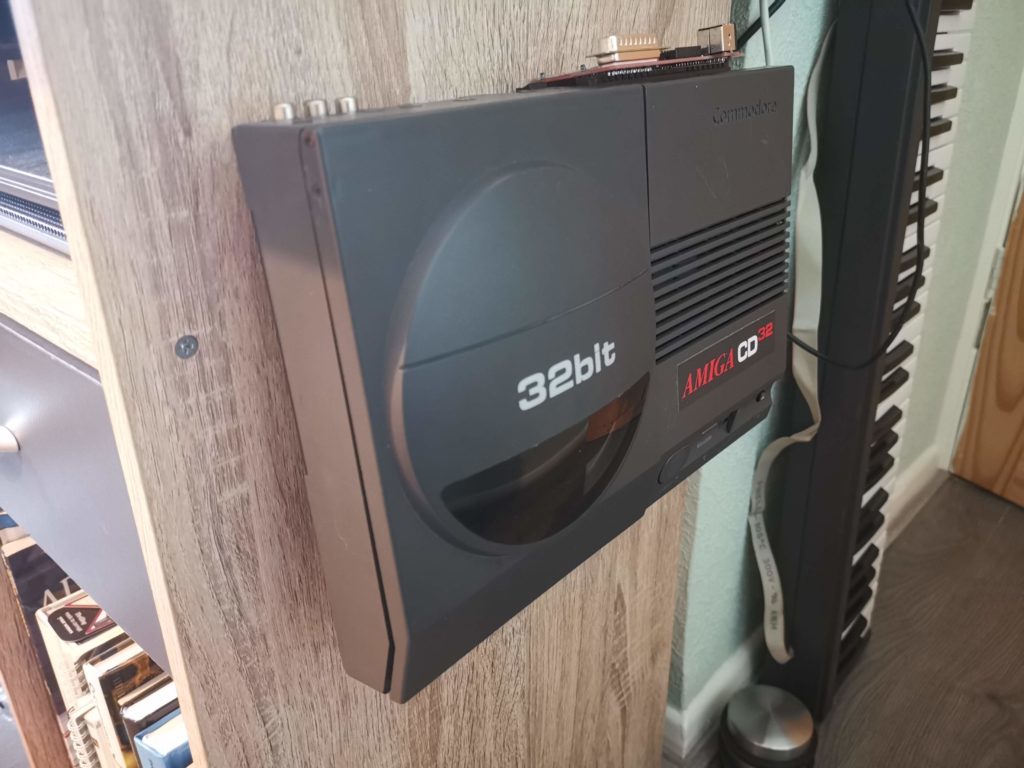 I’ve actually owned this product for several months before getting around to producing this post. Consequently I’ve had plenty of time to test it out. I’m happy to report that it works brilliantly. I feel confident that my CD32 is held securely thanks to both the way the prongs lock into the slots and the angle it is held at. I have mine attached to the side of my desk and I walk past it several times a day. It’s never been knocked off, even when I’ve accidentally bumped into it. It has rocked forward a couple of times but the prongs prevent it from ever tipping over. 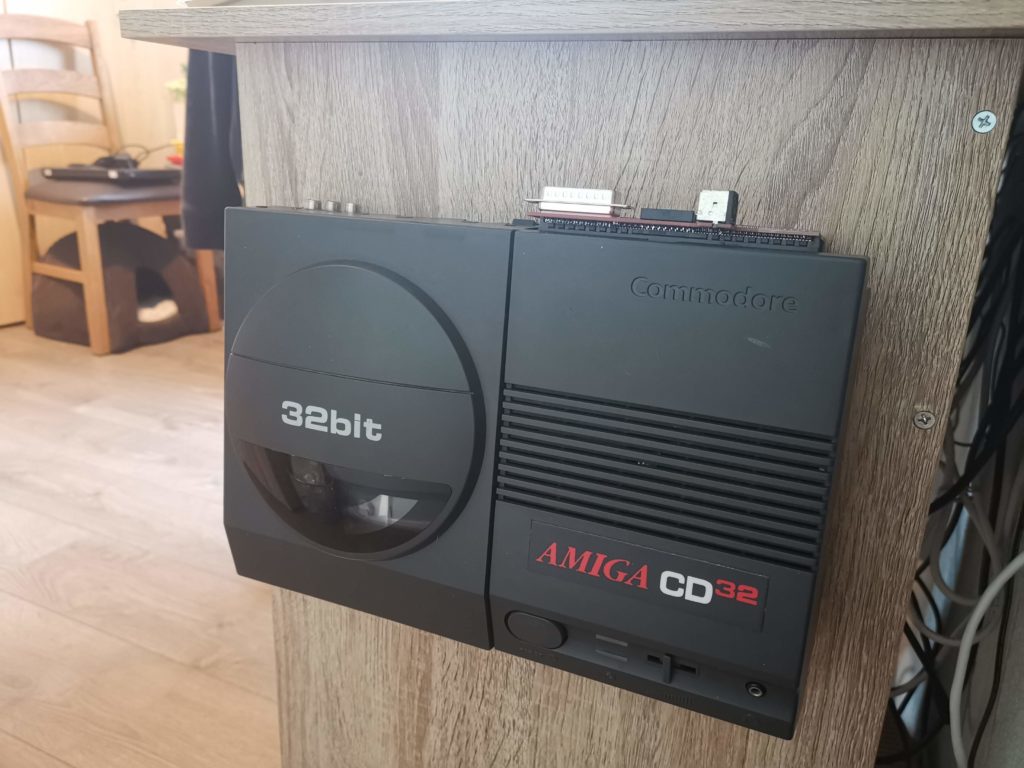 Lifting the console off the bracket does take a little getting used to. You need to angle it just right and then pull it out and up at the same time for it to break free of the prongs. I didn’t find it a big issue though and I’d rather it was held securely than risk it falling off the bracket because it was too loose! Once you’ve done it a few times you develop a knack for it. I’ve also had it on and off the bracket dozens of times now and it is showing no signs of wear.

Whether you want to store your own CD32 vertically or put it on display I’d happily recommend this product. It’s well made, priced fairly and does exactly what it sets out to do. The guy has a website where you can order them from here: ComputerGrafica3D. He also sells brackets for the breadbin cased Commodore 64 or VIC20 computers which I will be reviewing soon.