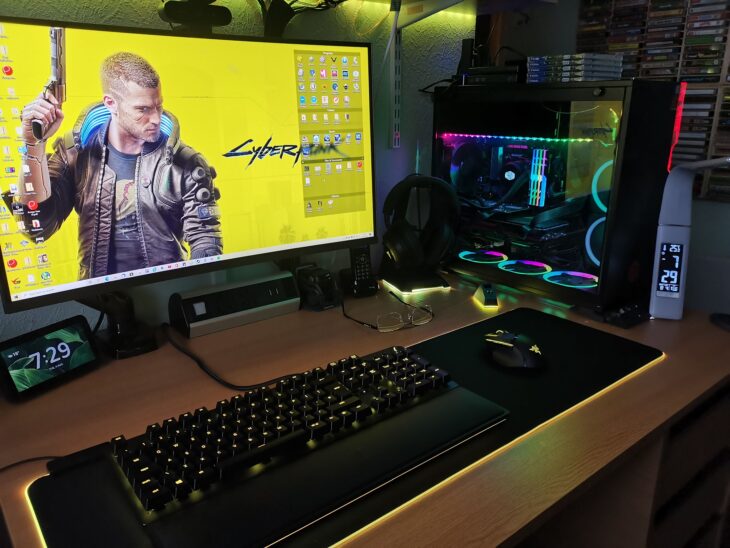 As much as I love my retro computer systems I still enjoying tinkering with PC’s as well. I did try to make do with a pretty decent gaming laptop for a couple of years but it aged quickly and I couldn’t expand it so decided to build myself a new desktop PC. As well as being able to do the normal office-type stuff, photo and video editing etc., I really wanted one that would be capable of playing the new games that support ray tracing.

Here’s a rundown of my system, which I’ll keep updated whenever I change something: (last updated 27th June 2022).

It’s not perfect though and I do have a few niggles with it. For one, I wish I’d picked a case with a couple of 5.25″ drive bays so I could mount optical drives inside it. It seems drive bays are becoming a thing of the past now though as very few cases still include them. So instead I’ve got a couple of USB 3 external drives sat on top of the case to allow me burn discs, create lightscribe labels and play my original disc copies of Diablo and Starcraft etc.

My other niggle is closely related to this. Even though my PC has 8 USB ports (6 on the back, 2 on top) that’s nowhere near enough. I tried running with a 7 port USB hub perched on top of the case for a while but got fed up of the mess of wires that entailed. I’ve since added two 5 port PCIE expansion cards giving me an additional 10 USB ports on my PC. Combined with the 3 ports on the Razer Base Station and the single Port on the back of my I now have a grand total of 22 which I feel is just about enough for the time being…

As any PC enthusiast will know – your build is never complete. That ‘must-have’ upgrade is always just around the corner calling to you like a siren of the sea. But for now I am content… at least until I see how much better the 4000 series Nvidia cards turn out to be when they launch…