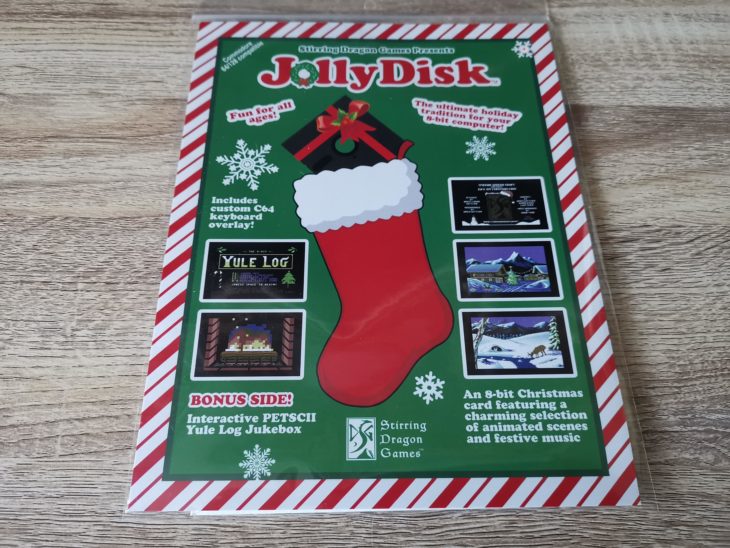 I spotted this little festive treat quite by chance just a few days before Christmas. It’s called ‘JollyDisk’ and is basically a series of animated Christmas cards along with some nice SID based Christmas carols. There’s also an animated Yule Log ‘Jukebox’ thrown in for good measure too.

From time of ordering to delivery from the USA to the UK took ten days. Given the time of year I thought this was pretty good. What wasn’t so good was the £13.11 customs charges I got stung for. Only £5.11 of that total was actually import duties, the other £8 was tacked on by Royal Mail for ‘handling fees’. Anyhoo… them’s the breaks as they say so I won’t hold that against it. As for the Royal Mail… you robbers… 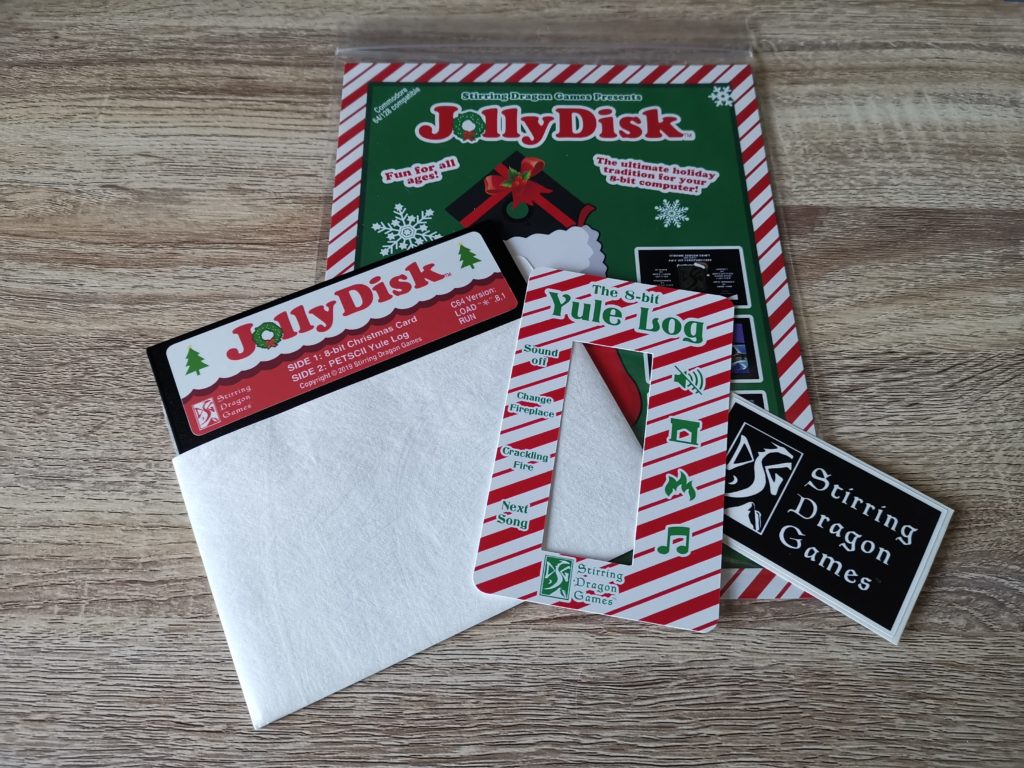 Anyway my JollyDisk came neatly packaged inside a ZipLock bag with a colourful card inlay showing what it’s all about. There was also a nice ‘Stirring Dragon Games’ sticker, a keyboard overlay (remember those?) and of course the actual 5.25″ JollyDisk itself!

The JollyDisk is actually double sided. The first side is devoted to the multimedia Christmas cards whilst the flip side hosts the Yule Log Jukebox. 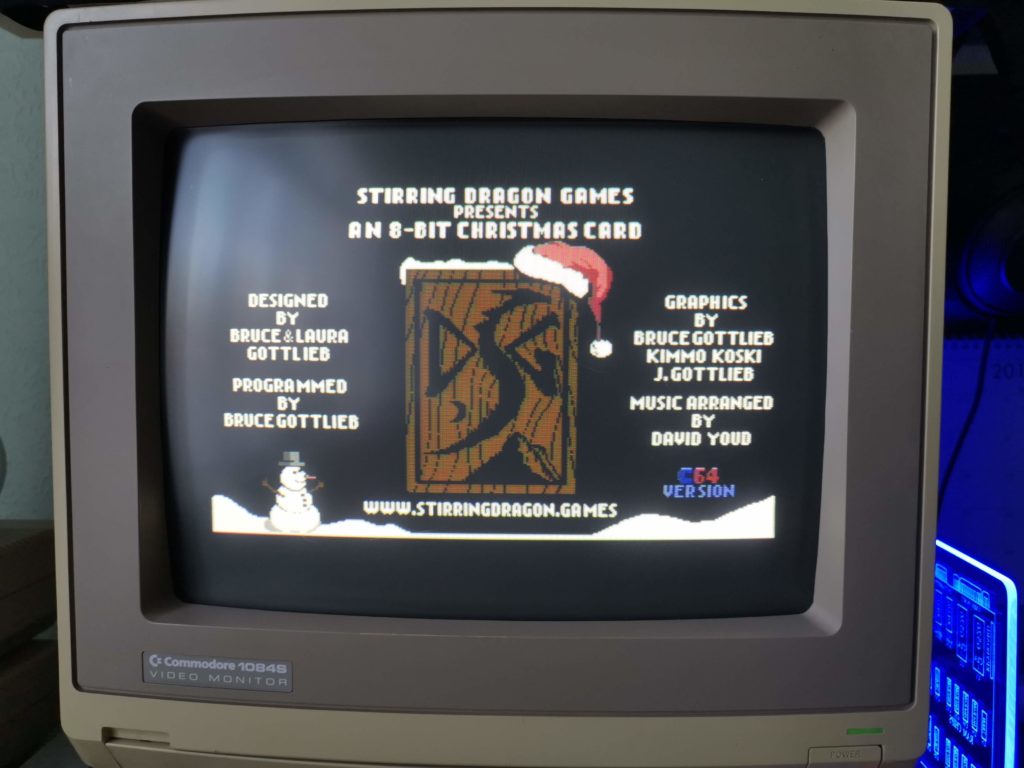 After a few moments you are greeted with a nice title screen before moving on to the Christmas cards. The cards are beautifully presented in full multi-colour graphics featuring a number of animations that help bring the scene to life. 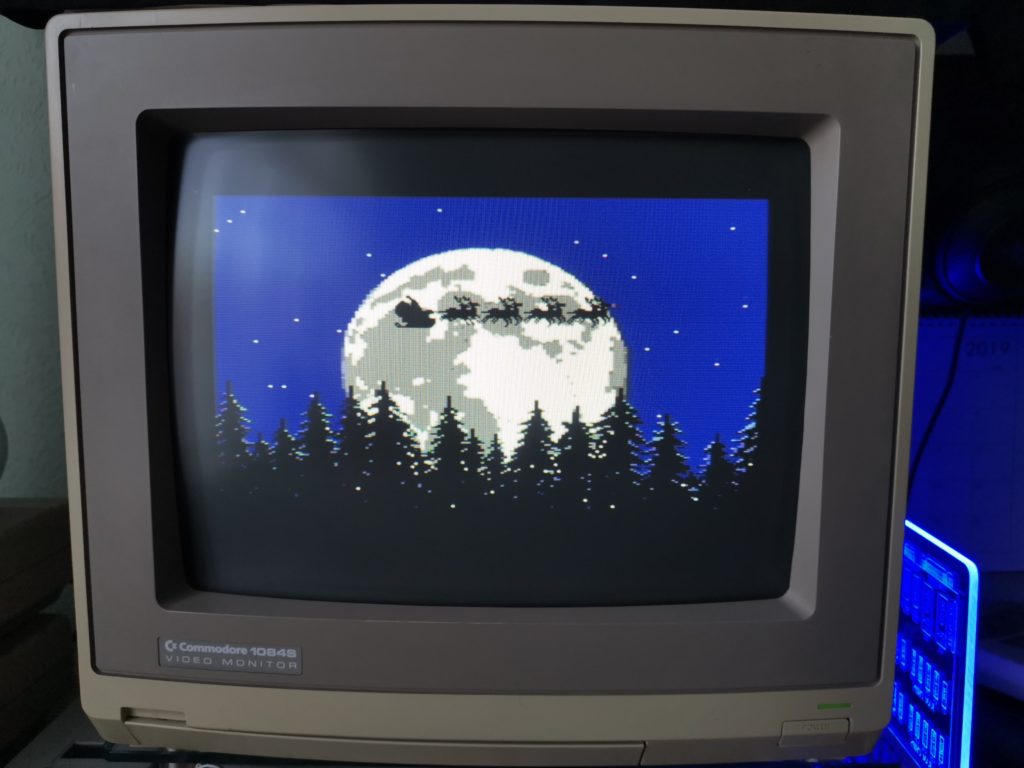 Pay attention to this one to spot a special appearance…

In one scene for example, Santa’s sleigh streaks across a moonlit sky (closely following by E.T. if you pay attention!). Others feature animated animals, snow falling, twinkling lights and much more. It’s clear that a lot of love went into creating each scene. 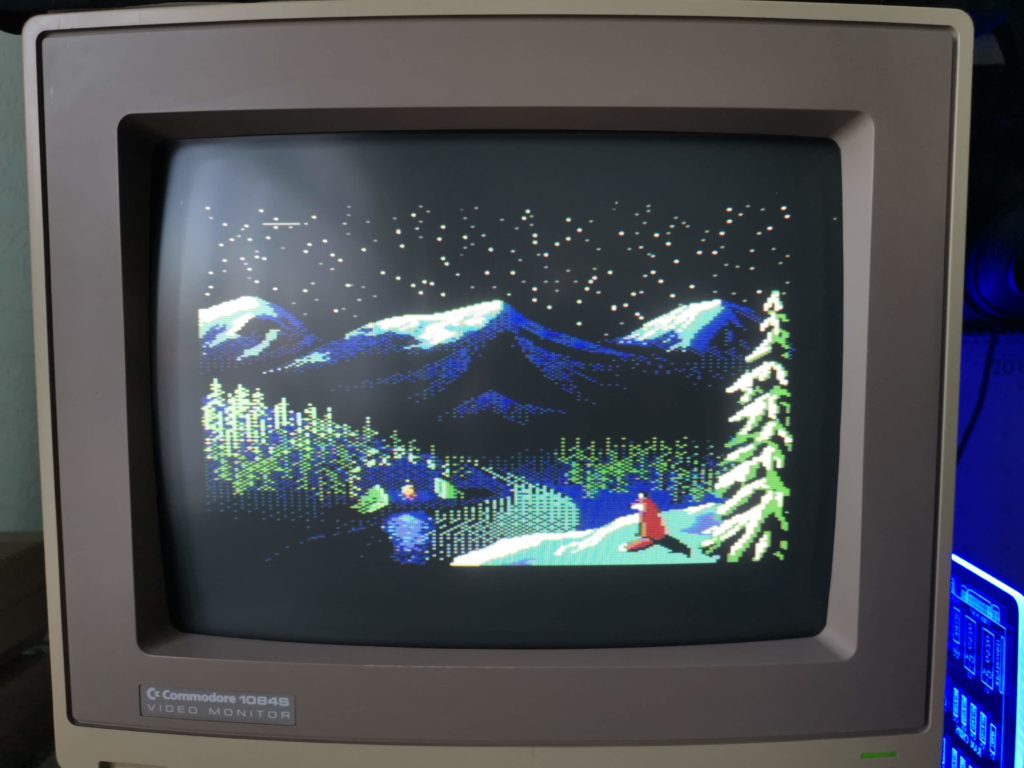 A fox gazes into a moonlit sky…

Accompanying each screen is a Christmas carol performed gracefully by the C64’s SID chip. There’s a different carol for each screen ranging from Silent Night to Deck the Halls and of course Jingle Bells is in there somewhere too! 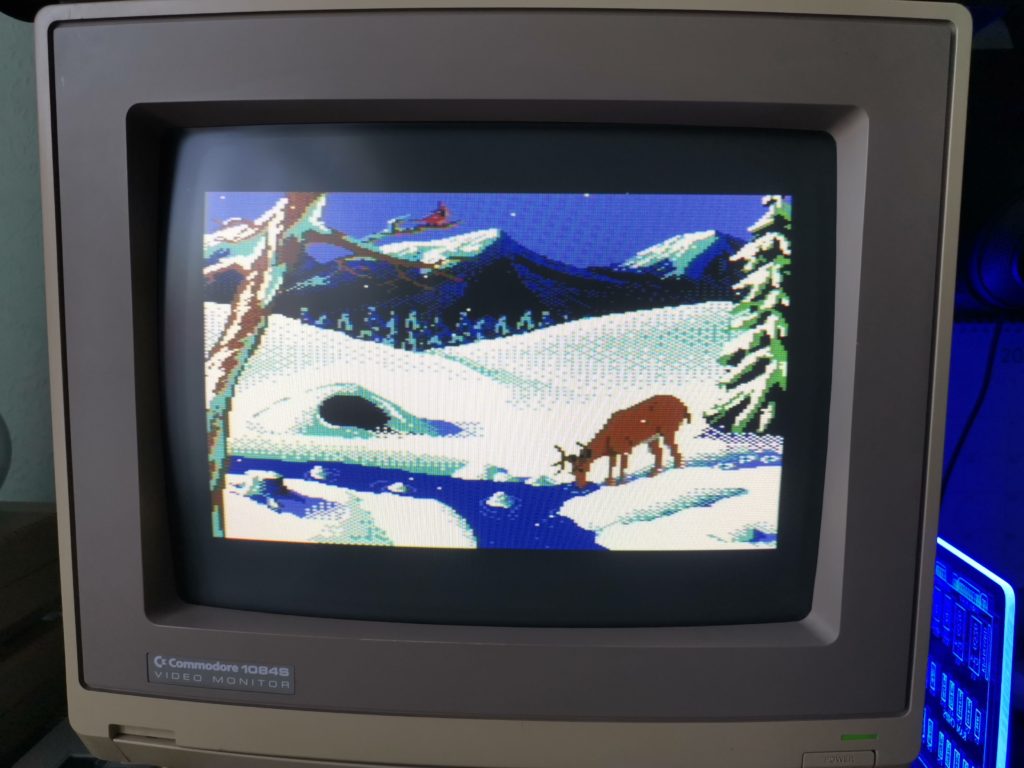 Once each music track has finished the next scene is automatically loaded off the floppy disk. 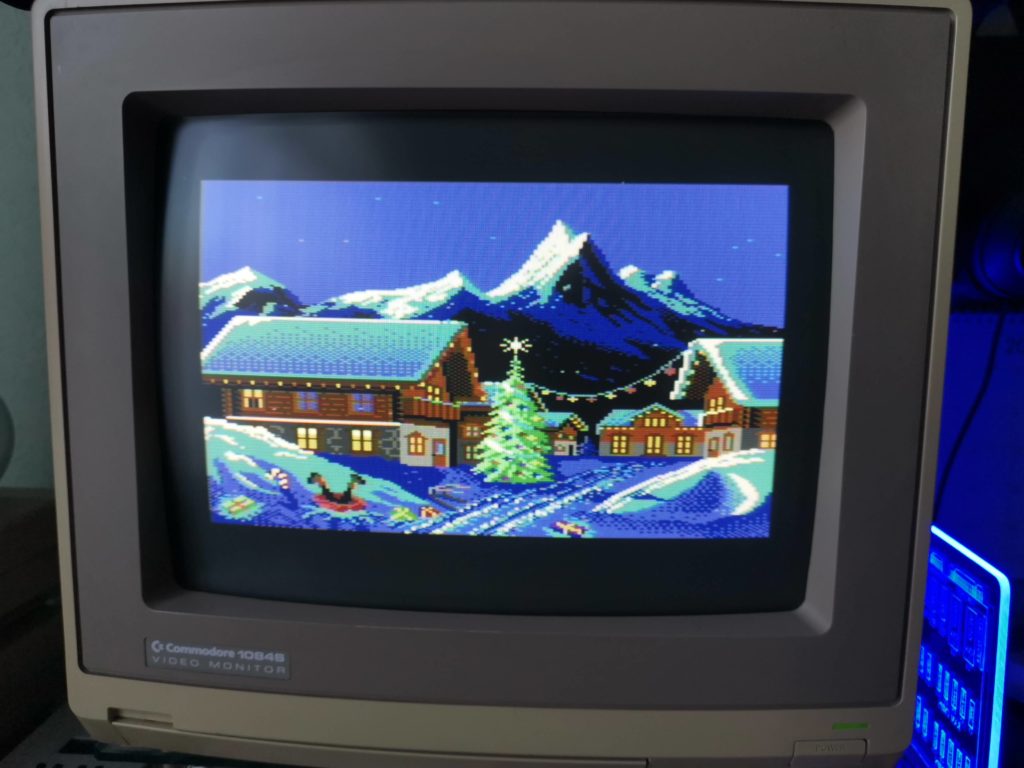 Once the final Christmas Card has been displayed it loops right back to the start. This means you can leave it on for as long as you like and have it constantly cycling through different scenes and carols. 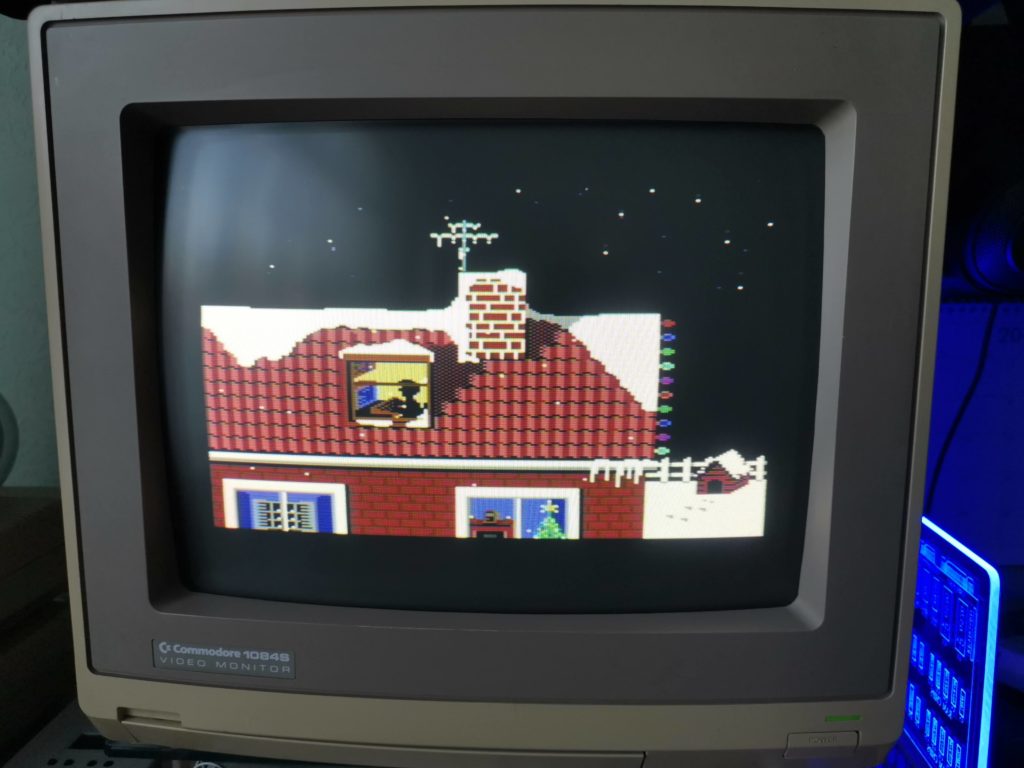 A kid playing on a C64 in their bedroom at Christmas – something most of us can probably relate to!

It’s the sort of thing a computer shop in the 80’s might have left on display during the festive season. 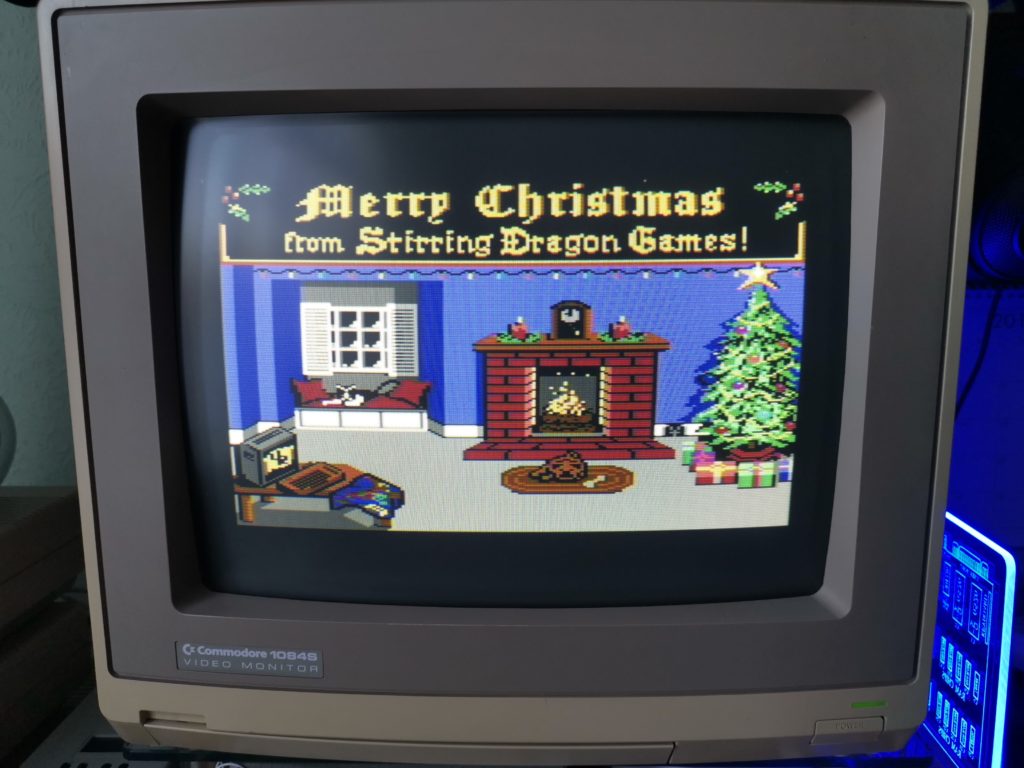 The last scene before looping back to the beginning

The second side of the JollyDisk features a fully animated Yule Log created entirely from PETSCII graphics. This ‘Jukebox’ is where that keyboard overlay comes in handy. 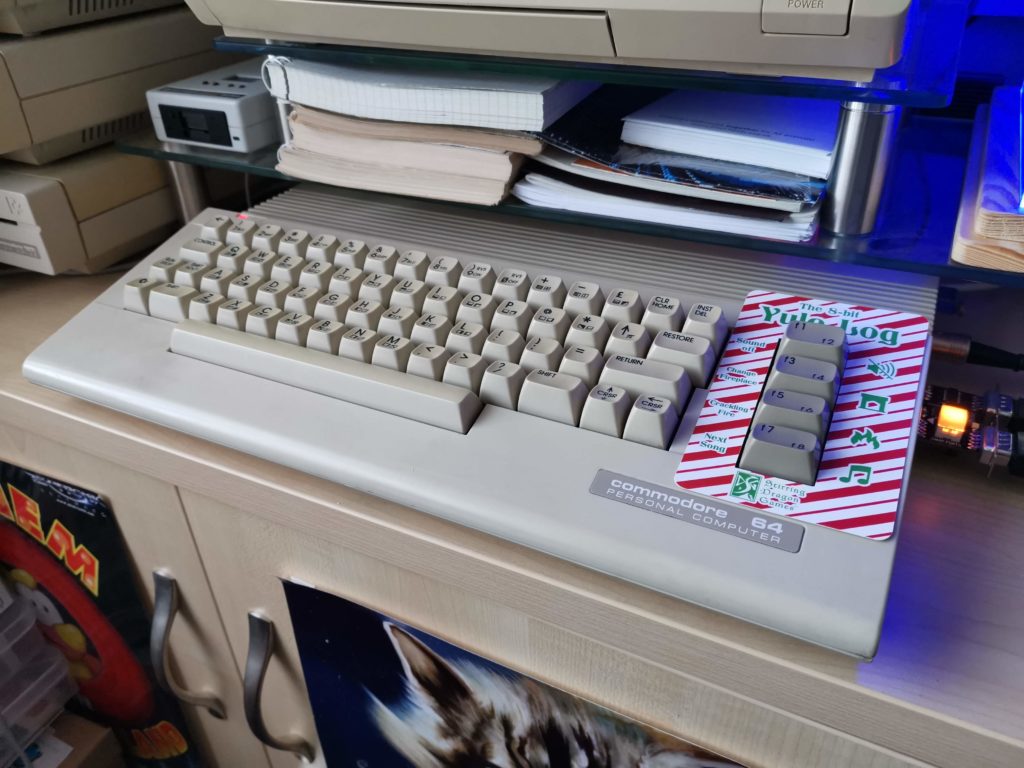 The keyboard Overlay in use

The keyboard overlay sits over the function keys and reminds you which keys do what.

The songs that play are the same Christmas carols that featured on side one. However there do seem to be a few more on offer here. I think there’s ten in total. In addition to moving sequentially through them with F7 you can also directly access each one using the number keys. Playing the songs like this causes them to play on a loop, particularly handy if you have a favourite. 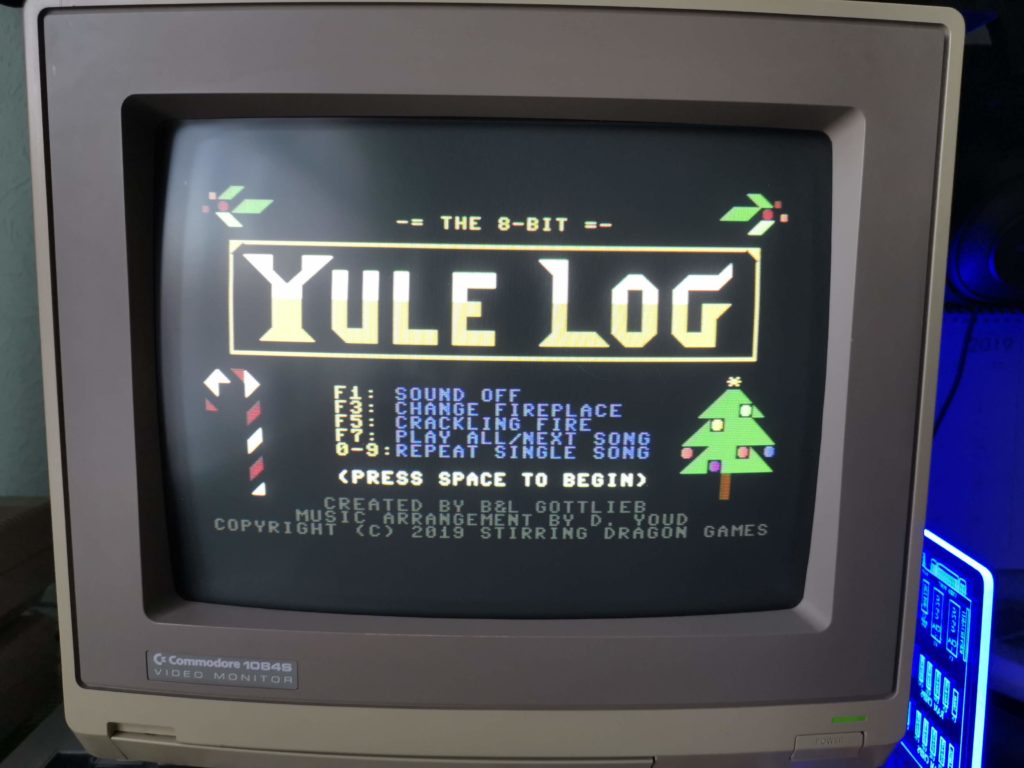 The crackling fire sound enabled by pressing F5 is quite effective. I assume it’s been created using various snippets of white noise but it’s pretty effective and definitely relaxing. In fact I’ve actually got it running in the background whilst I type this article!

Here’s an animated GIF I created of the crackling fire. You’ll just have to imagine the Christmas carols playing or the sounds of the log crackling – either that or buy a copy for yourself 🙂

All in all this is a delightful little product. It’s definitely something I will look forward to digging out every year to experience some 8-bit Christmas cheer.

As I write this it’s still available physically for $24.99 or $14.99 digitally from Stirring Dragon Games if you are interested in getting hold of a copy yourself.