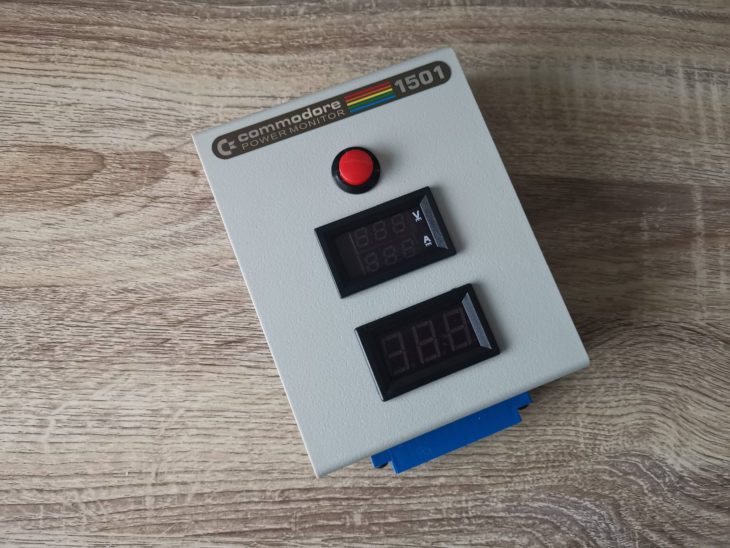 Whilst I was idly scrolling through eBay one evening a rather cool looking gadget caught my eye. The device in question is the ‘Commodore 1501 Power Monitor MkII’ to give it its full moniker. I’m a sucker for anything with coloured LED’s, VU meters, flashing lights, knobs switches etc. Basically anything flashy or mechanical in nature. This little device features both multiple colour digital displays and a big red nuclear launch button – how could I resist? 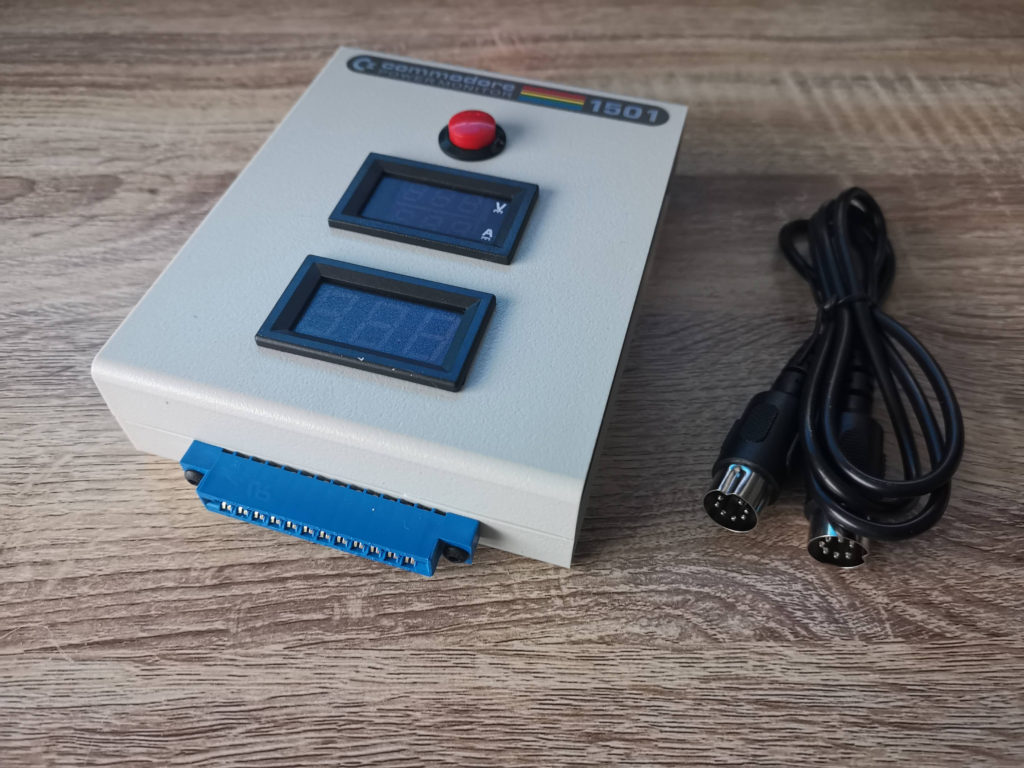 Here’s what came in the box, the Power Monitor itself and a power cable.

The seller is in Australia so delivery to the UK took a few weeks. It arrived well packaged in a small cardboard box. Opening the box revealed the Power Monitor itself together with a short power lead. The device is constructed entirely from plastic but has a textured finish that makes it look like it’s made of metal. The Commodore 1501 label is very convincing and makes it look like a real commodore product (although obviously it isn’t). 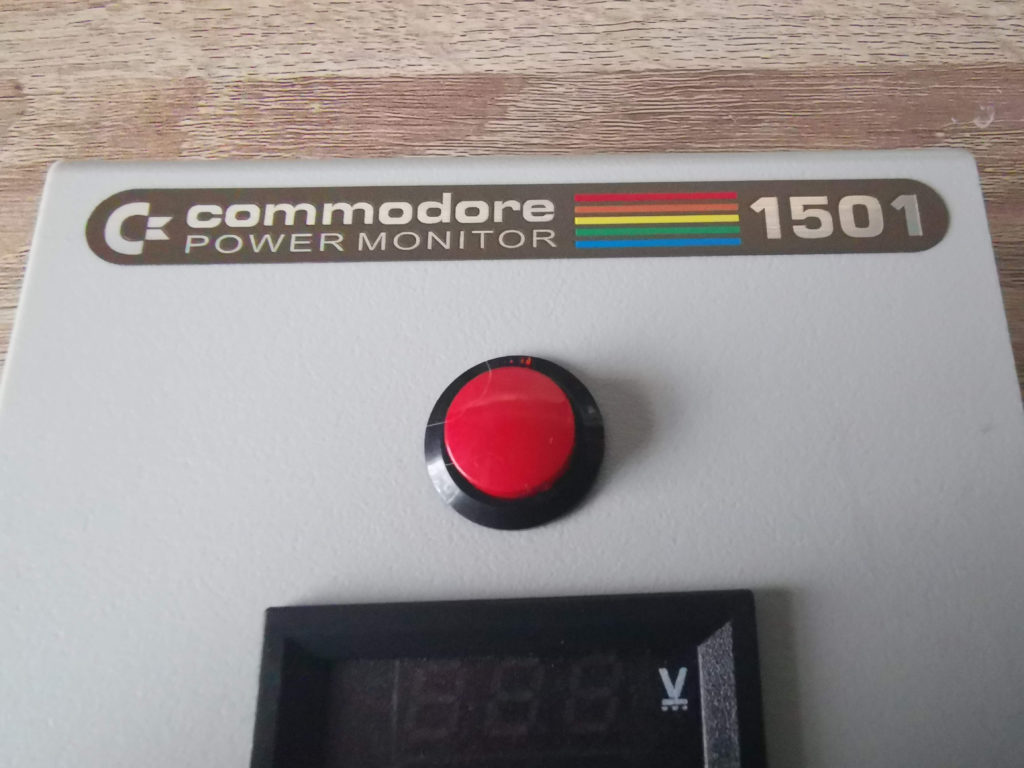 A big red ‘reset’ button screaming to be pushed!

Flip the box over and there’s even an official looking serial number label on the bottom. The overall presentation on this is top notch and really made me feel like I was back in the 80’s and had just purchased an ‘proper’ Commodore product. 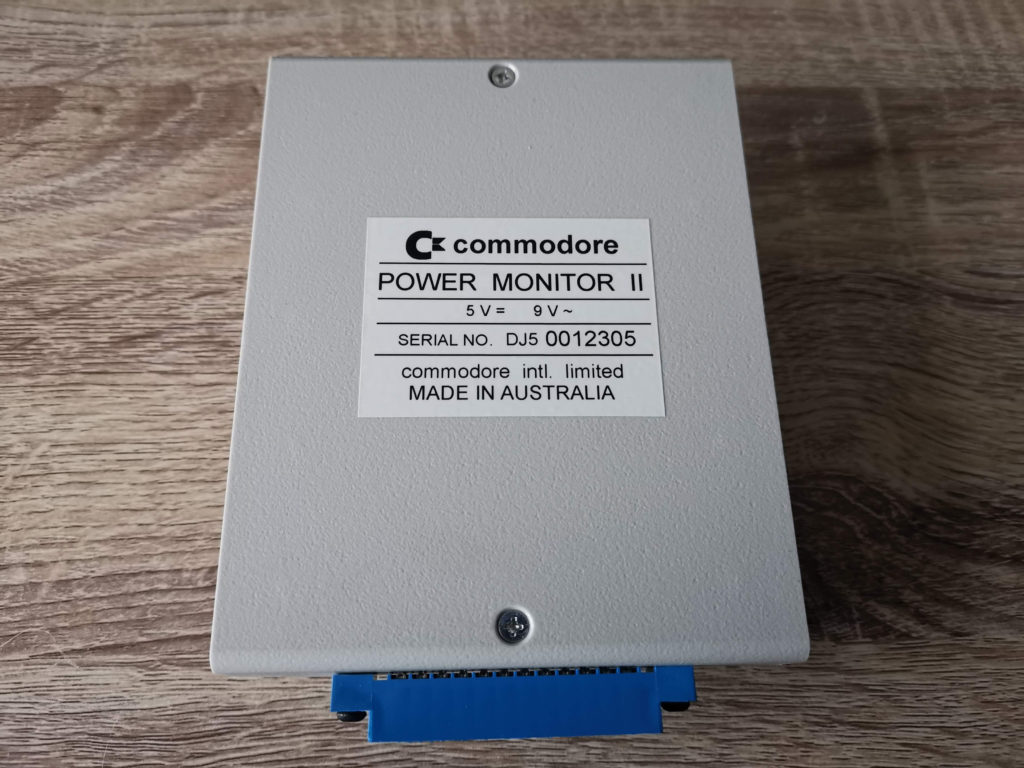 So what exactly is it then?

This device does exactly what the label says – it monitors the power output of your Commodore PSU. In simple terms it’s basically a voltmeter and ammeter rolled into one. It is able to measure both the 5v DC and 9V AC PSU outputs and also measure the current being drawn by the computer.

In an ideal world your PSU should be outputting voltages as close as possible to the 5v and 9V levels that your Commodore needs. However this is often not the case, especially with old Commodore PSU’s. There are plenty of horror stories online about C64’s being fried by PSU’s that output higher voltages. It is supposed to work on the Commodore 128 and Plus/4 in addition to the VIC20 and C64 but as I don’t own either of those systems I can’t confirm this. 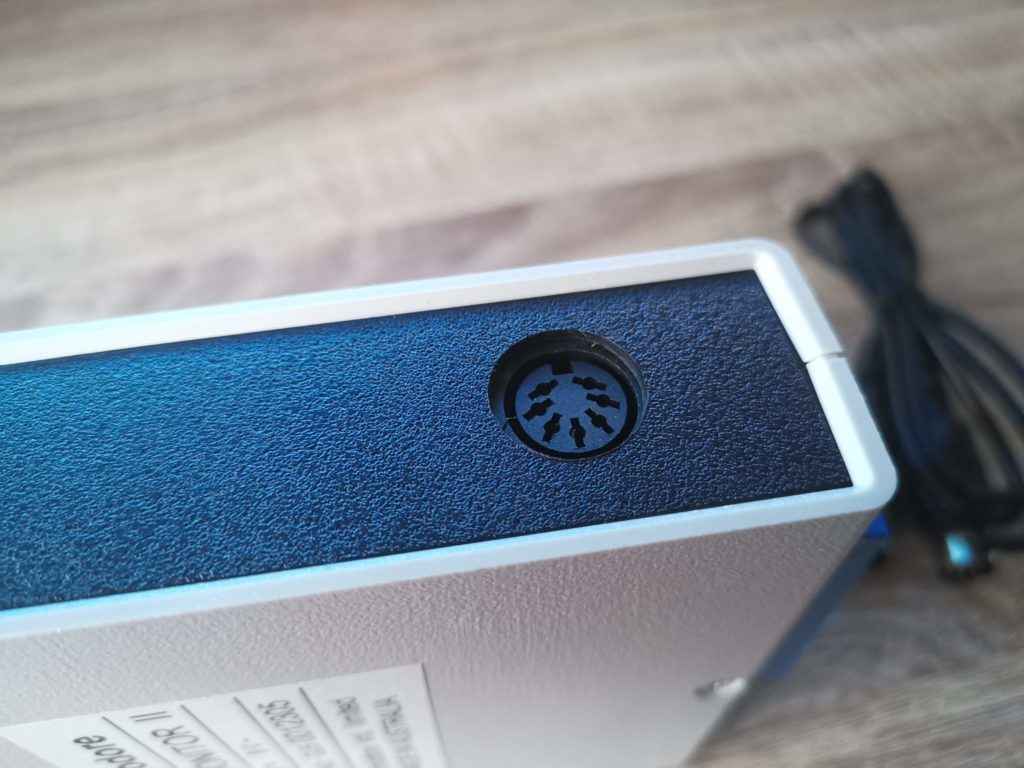 One of the two DIN sockets for attaching the power leads.

For some reason there were no instructions included with my power monitor. However after contacting the seller he kindly obliged and mailed them to me. Once more this is an amazing homage to the sort manual Commodore themselves used to produce back in the day, even down to the colour used, very nostalgic indeed.

The manual explains everything you need to know and is even quite funny in places. Tucked away amidst the instruction texts are lines like this; ‘This is NOT the time to practice your Kama-Sutra and experiment with how many different ways to insert your equipment’. There are quite a few more of these so the manual is well worth a read for these alone! 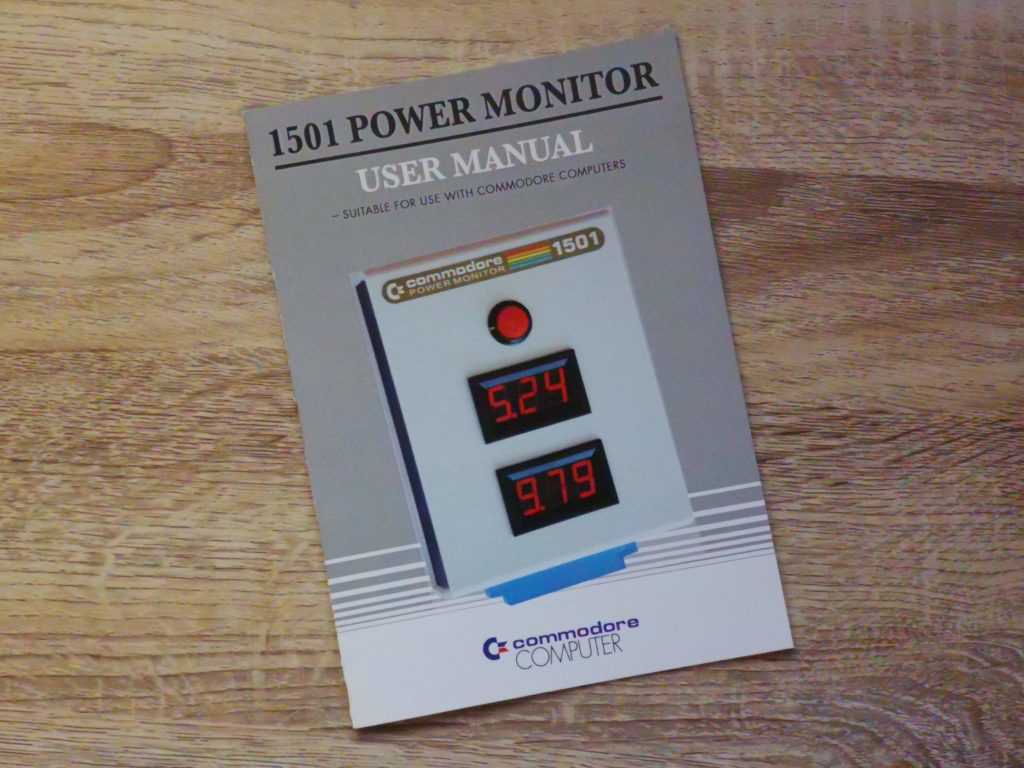 That big red ‘nuclear launch button’ is actually a reset button allowing you to reboot your Commodore without having to power cycle it, providing that is, your have it connected via the user port. 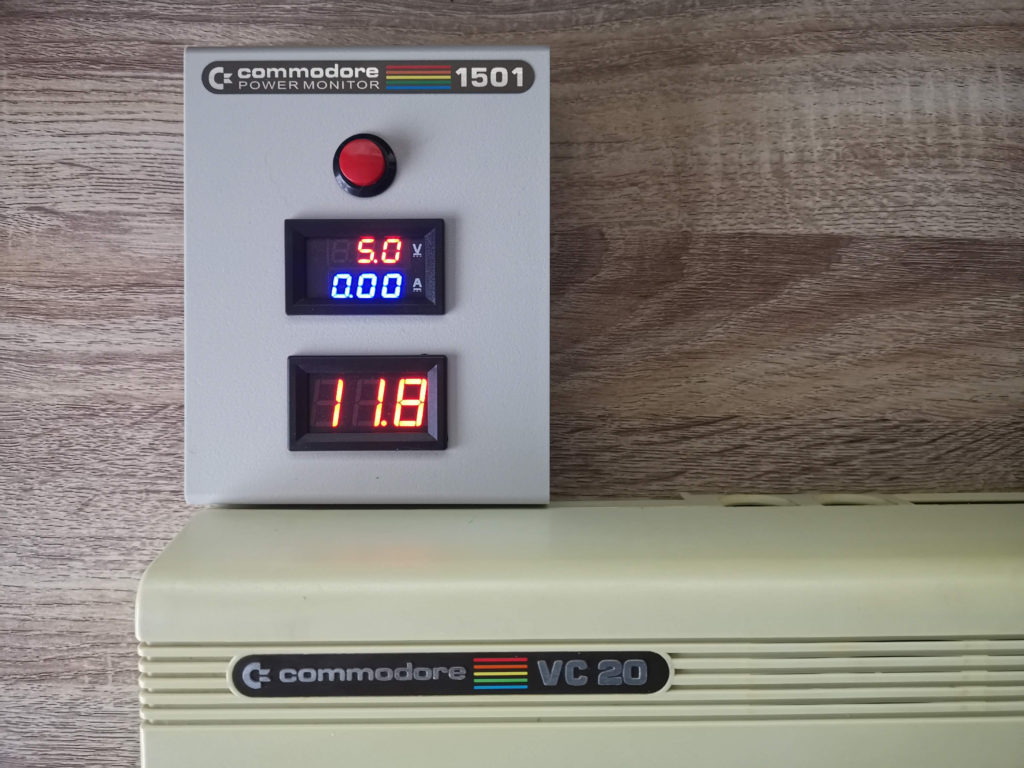 Display seen when hooked up to user port.

How is the Power Monitor used?

It can be used in a number of different ways but the most straightforward way is simply to attach it to the user port. Used this way it will display the 5V DC voltage level in the upper display and 9V AC in the lower one. This is also the only configuration in which the reset button will actually work. However when connected this way it will not display the current being drawn by the computer. 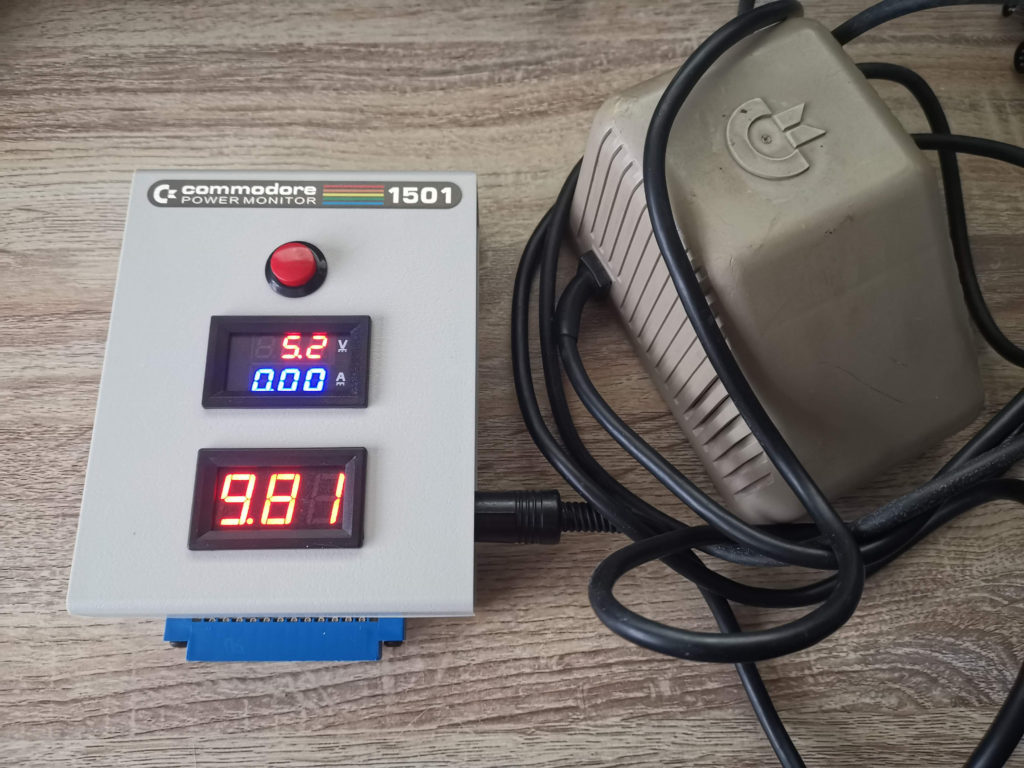 Using the 1501 to test my original Commodore PSU which is now almost 40 years old!

You can also use it as a simple PSU tester, to ensure a PSU is actually working or not outputting dangerously high voltages. To use it in this manner simply plug the PSU into either of the two DIN sockets on the Power Monitor. The displays will light up immediately to indicate the voltages being output by the PSU. Obviously used in this way there’s no load applied so the current cannot be measured. 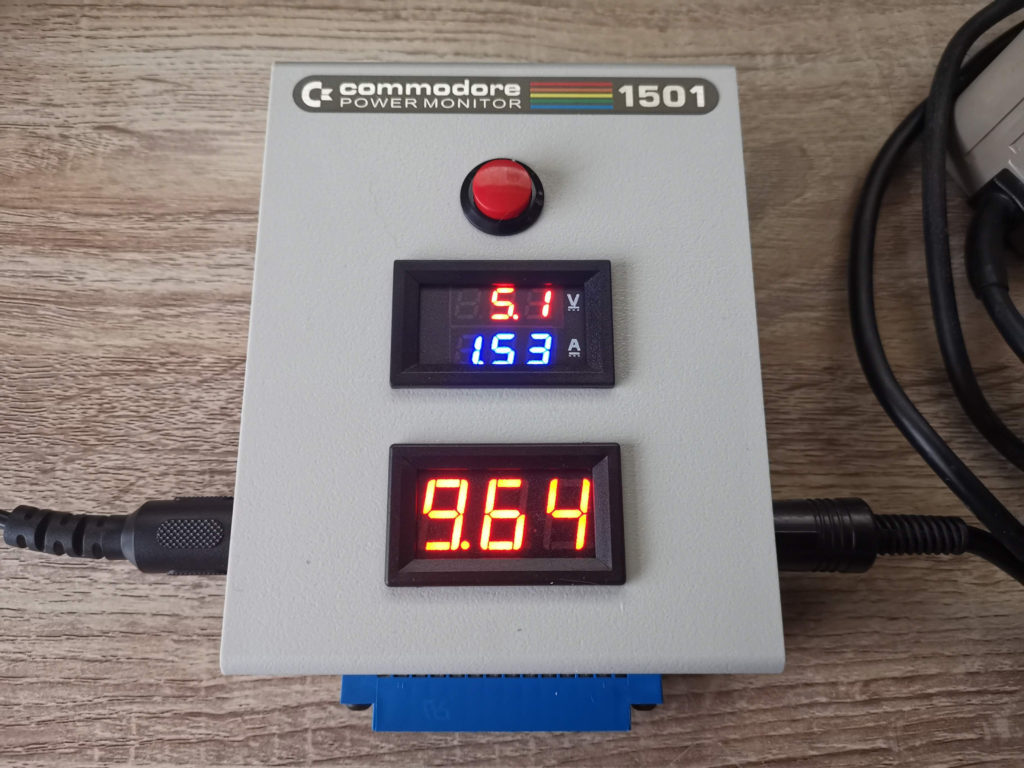 The final way it can be used is to attach it between your PSU and your Commodore VIC20 or C64. This is what the supplied cable is for. Simply plug your PSU into the DIN socket on one side of the 1501, plug one end of the supplied cable into the socket on opposite side and then connect the free end of that up to your computer. In this configuration you get the most accurate power readings as the PSU is operating under load. You can now also see how much current is being drawn indicated in the blue Amps display.

I must confess I was initially attracted to this solely because of it’s appearance. However it’s actually an incredibly useful little gadget to have around. I have opted to leave it permanently connected up in-between my VIC20 and my 40 year old original Commodore PSU. This way I can always keep a watchful on eye on things. My C64 uses a modern Electroware PSU so I’m not overly concerned with that frying my computer… 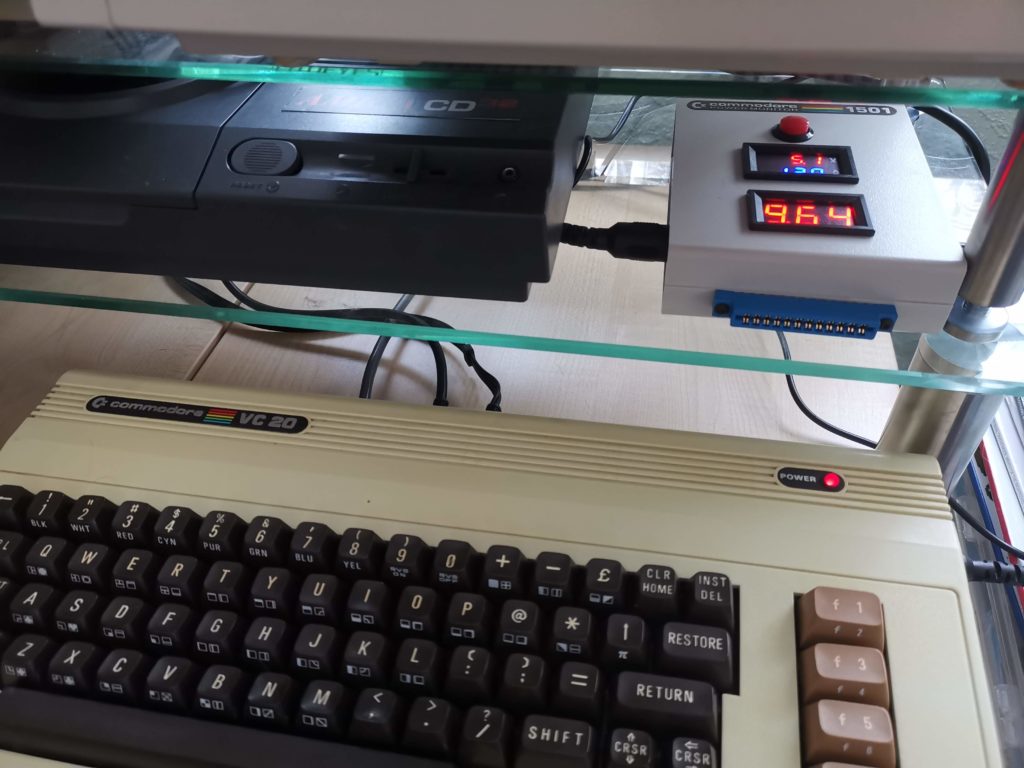 Power Monitor MkII in use with my VIC20 setup.

I can use it to test PSU’s on the fly and also to give an indication of how ‘healthy’ they are. Granted I could do all this with a multi-meter but that wouldn’t be as convenient and it certainly wouldn’t look as cool!

The build quality is terrific and the guy making them has really nailed the whole ‘made by Commodore’ vibe. Of course it’s not an essential purchase by any means but it is a very useful one and gets a big thumbs up from me.

If you fancy getting one, this is the one I purchased on eBay. I should point out that he actually does two versions. Mine is the MkII which can additionally measure current used. The cheaper MkI version only measures voltages but is roughly half the price.