I’ve been interested in computers and gaming since the late 1970’s when my parents bought me and my sister our first games console. It was a Radofin Telesports IV and could play quite a few different cartridge based games – in colour! Graphics were very primitive and most games were ‘pong’ variants but it did have a few more interesting games. The Evil Knievel type one were you had to jump your ‘bike’ over an ever increasing number of ‘buses’ was a personal favourite with 9 year old me!

In the early 1980’s they bought us a Commodore Vic 20 for Christmas. This is the machine that started my love affair with computers that I still have to this day. Boasting a whopping 3.5K of RAM and 16 colours this was an impressive device at the time. I learned to program in BASIC and created all manner of games and utilities. It was something that really captured my imagination and educated me in a way that a NES or Master System could never have done. Of course I played games too, Gorf and Omega Race were fantastic. The Vic 20 also introduced me and my Dad to the joys of the text adventure game. It was blessed with several terrific Scott Adams adventures including; ‘The Count’, ‘Voodoo Castle’ and ‘Impossible Mission’ – experiences that I still remember today.

My next machine was a Commodore 64 – this time bought just for me as my sister had lost all interest in computers by this point. As much as I loved the Vic 20 the C64 was better in every way and so it was quickly cast aside by it’s more powerful sibling.  The graphics and sound were a huge improvement over the VIC and indeed the SID chip (responsible for the C64’s legendary music abilities) still sounds amazing today. Over the years I added many peripherals to it; A 1541-II Disk Drive, a 1520 Printer Plotter, a Currah Speech Synthesizer, A Dot Matrix printer and even Commodore’s  full-size Midi Keyboard and Sound Expander add-on. It was such a versatile machine I was still using it when I started University in the late 80’s where it helped me complete my assignments using Mini Office II.

Whilst I was still at Uni I finally found myself with enough money of my own to buy a computer myself. Naturally I gravitated straight towards Commodore’s new wonder machine – the Amiga. This machine really blew me away as it was so far ahead of it’s time. A built-in floppy drive, 4 channel stereo sound, 512K of RAM and a staggering 4096 colours!!! To put that into perspective I think the most a PC could muster at the time was 256 colours. The most amazing thing to me back then though was the multi-tasking. Being able to slide the ‘front’ screen down revealing the others ‘behind’ it running different programs was like magic. You could play a game whilst still having Wordworth, Deluxe Paint, Octamed and Workbench all running in the background. Back in the 1980’s this ‘pre-emptive multi-tasking’ was simply unheard of – no other computer had this ability.

The games it could play were simply incredible too. Titles like Lemmings, Syndicate and the early 3D games like Hunter and Archipelago entertained me like nothing had before. Games not only looked better but they now had the depth of gameplay to really suck you into their worlds and capture your attention. I was so smitten with this machine that I simply refused to use anything else right through most of the 1990’s. I upgraded a few times, to the Amiga 1200 and then to the beast that was the A4000. I equipped it with pretty much every expansion there was, including a 68060 accelerator, Picasso graphics card, Tocatta sound card, SCSI card, flatbed and film scanners and of course with the advent of the Internet a Supra 28.8k FaxModem. By the late 90’s I had to adapt to keep up with the trends at the time. Online banking (with custom software) became a thing – so I installed PC Task and Windows 3.1 on it so I could run the Barclays Internet banking software. It was quite sluggish but it worked perfectly. I used PhotoShop at work so wanted something similar at home. This was possible on the Amiga too with the aid of ShapeShifter which let me run MacOS 7.6 and PhotoShop like a charm. The two computers shared the same 68000 series CPU so this was an amazingly capable emulator. It also allowed me to run Mac games like Sim City 2000 and Marathon on it and they actually ran better than they did on most of the Macs around at that time thank to the Amiga’s faster 68060 CPU.

However by this time Commodore had been out of business for years. Despite all the upgrades I’d installed on my A4000 it eventually lagged way behind what the best PC’s of the day could offer. The internet was evolving rapidly but the software releases on the Amiga were stagnating and I couldn’t stay on the cutting edge any more. So I did what many had already done years before and bought myself a Windows 98 PC…

Fast forward to around 2015 and I had started to feel like computing and gaming had reached somewhat of a plateau for me. I had already dabbled with Apple Macs and didn’t really enjoy that experience. Long gone were the days where I could buy a new machine that offered a radically different experience from anything I’d had before. Maybe I had reached a ‘certain age’ too (my wife definitely thinks so!)  but I started to feel a strong draw back to these classic machines. Sadly I’d already sold most of the Amiga kit I’d amassed in order to pay for other things but I still had most of my Commodore 64 kit safely boxed up in storage. Amazingly most of it still worked when I unpacked it, even though it hadn’t been touched in 20 odd years! Since then I’ve been slowly trying to re-build my collection. Adding games and hardware that I used to own, some that I always wanted but couldn’t afford and even adding new stuff that didn’t even exist back in the day! Who knew there would still be a thriving C64 and Amiga scene over 30 years since they were launched! 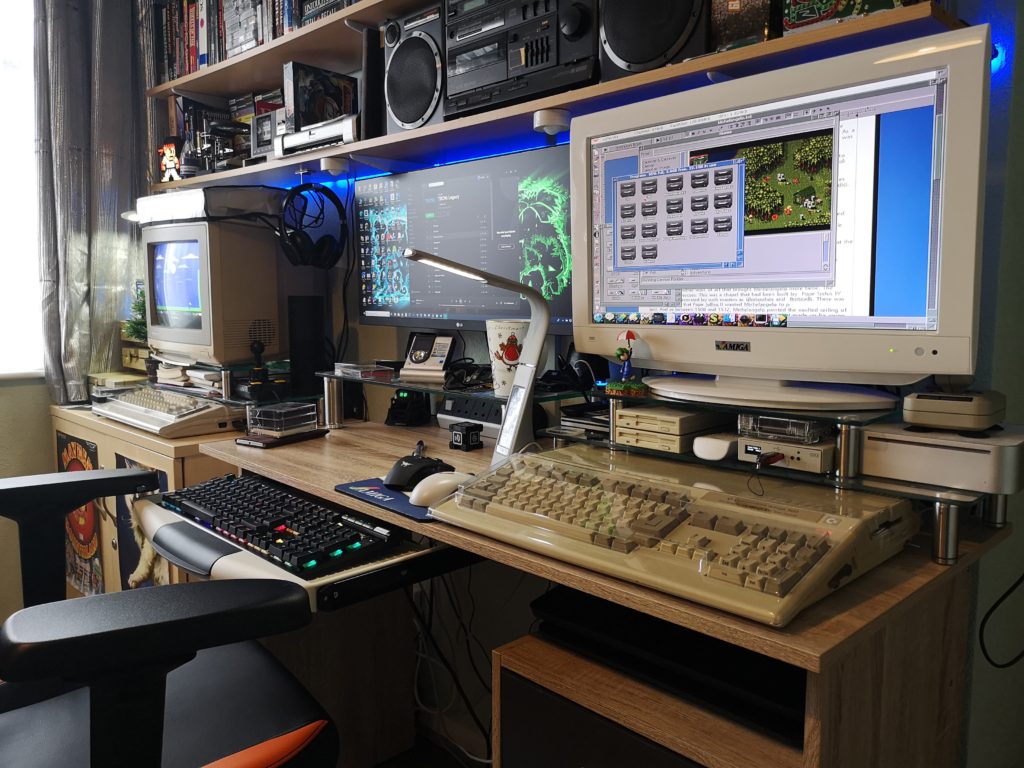 I decided to create this site for a number of reasons. To record my adventures in obtaining/repairing and using old computers and tech, help catalogue my retro equipment and game collections and also to share projects, tips and ideas with other like-minded people. As time passes, information about these classic old machines is inevitably lost as the users that once treasured them have long since cast them aside. Often information that was once common knowledge decades ago has now become obscure or simply disappeared completely. I’d like to think that this site is helping to preserve some of that information and is helping others who share a similar interest in enjoying these devices in the 21st century.

This website is all my own work, warts and all. Every product featured or reviewed has been paid for out of my own pocket. All photos and artwork are my own too. The vast majority of the photos and videos have been taken with my mobile phone camera which right now is a ‘Samsung Galaxy Z Fold 2. Tripod videos have been taken with my Fujifilm X-T10 camera.

I don’t run this site for profit, I maintain it because I’m passionately interested in these old machines and I enjoy talking and creating content about them. Having said that, if you would like to show your appreciation for something I’ve created that has helped or entertained you then here’s my paypal.me link.

Any donations, no matter how small, would be greatly appreciated and would help with my hosting fees and to pay for site plugins/themes and maybe one day getting hold of stuff to review too.

Disclaimer: Some pages on this site feature affiliate links to products on Amazon and eBay which earns me a few pennies if you buy something from them.

A big thanks goes out to Benjamin Wimmer who provided the code to produce the 3D box art used in my software collection pages. If you’d like to include some 3D boxes on your site then take a look at his Big Box Collection website.

If you’d like to get in touch for any reason at all please use the form below. Alternatively you can email me at this address: ‘lyonsden.amiga at gmail.com’.