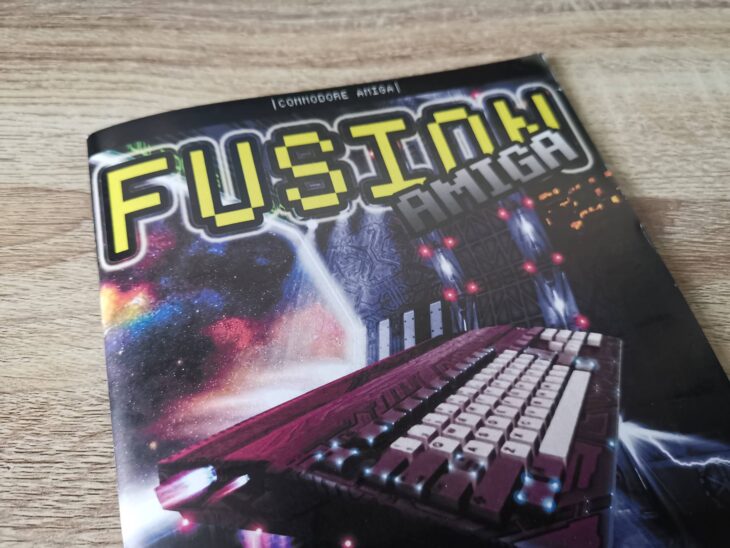 This edition of Fusion magazine is for all us Amiga fans out there. It’s a special edition of the magazine, completely dedicated to all things Amiga (and CD32!). It’s just a little bit thinner than the regular magazine running to 52 pages all in.

Closer look at the magazine cover.

So what sort of things are covered in this issue? Well there’s a mixture of game reviews, several Top 5 ‘best of’ lists, hardware guides and a bunch of Amiga-centric articles from luminaries in the scene.

The top 5’s include CD32 Games, Amiga Utilities and also Point and Click Adventure games. Meanwhile the hardware guide covers each Amiga model from the first A1000 right through to the final CD32 System.

Take a peek at the contents page below to see what else features in this issue: 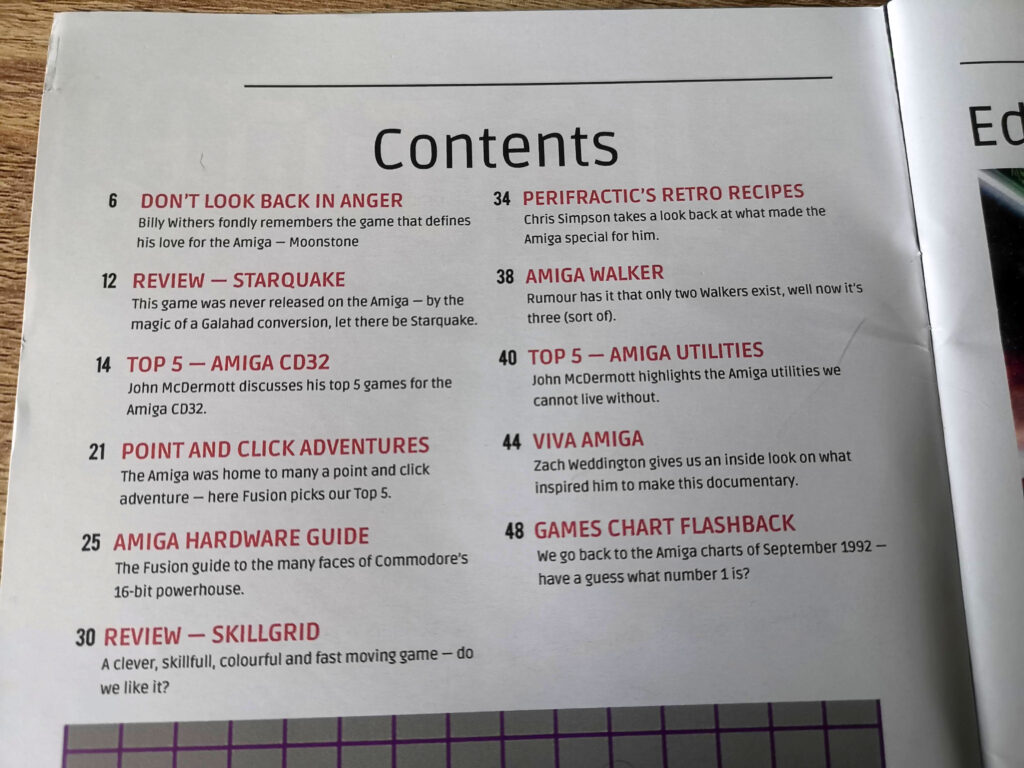 If you want to pick up a copy of Fusion Amiga Magazine then head on over to their website. If you use the code ‘LYONSDENBLOG’ at the checkout you will also get 15% off the price! I will also receive a tiny bit of commission to help towards my running costs. 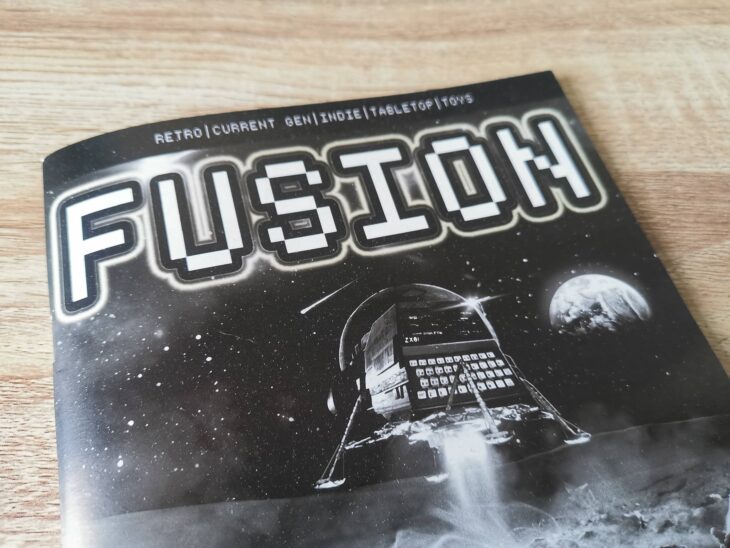 Received the latest edition of Fusion Magazine, issue #11, a couple of days ago. This little magazine has really grown in terms of content and quality over the past year thanks in no small part to the diverse range of contributors. This issue see articles from Retro Man Cave, Octav1us and Dave Perry to name but three. 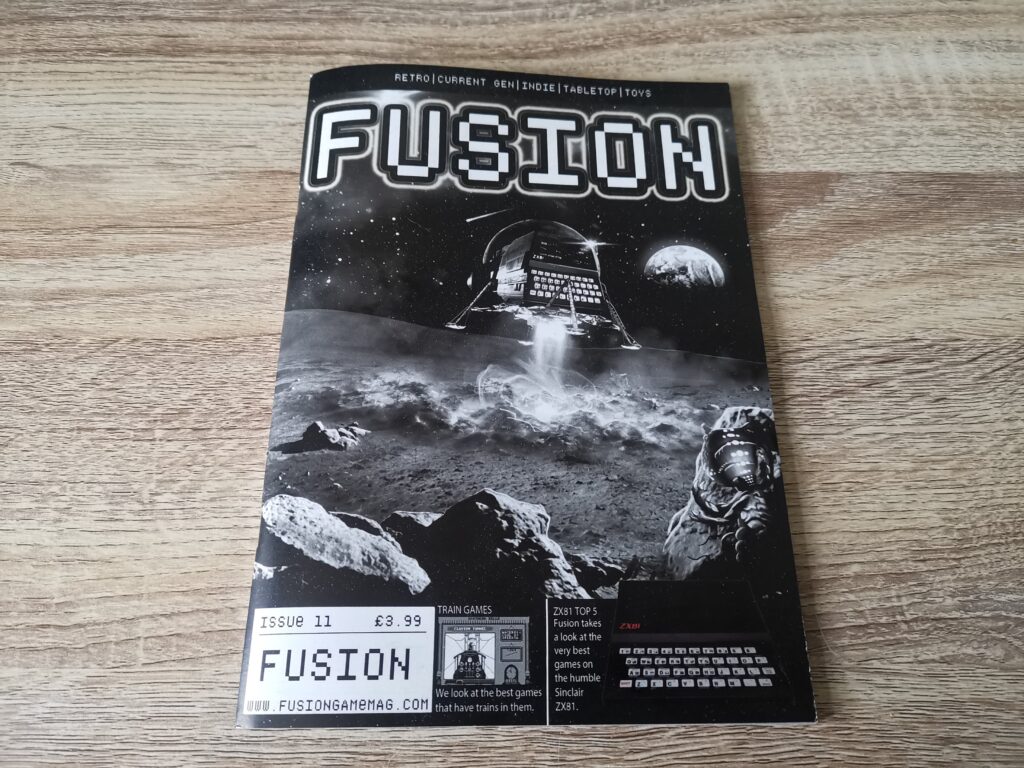 I’m focussing on the retro gaming content here but there is more to it than that as it covers a smattering of modern games along with retro toys and memorabilia. All in there’s 60 pages worth of content, which for £3.99 is great value for money and should ensure that even if some of the content doesn’t interest you, there should be plenty that will. I’ve got a discount code for 15% off the price at the bottom of this page too.

Here’s a little look the contents page so you can see what else features in this issue: 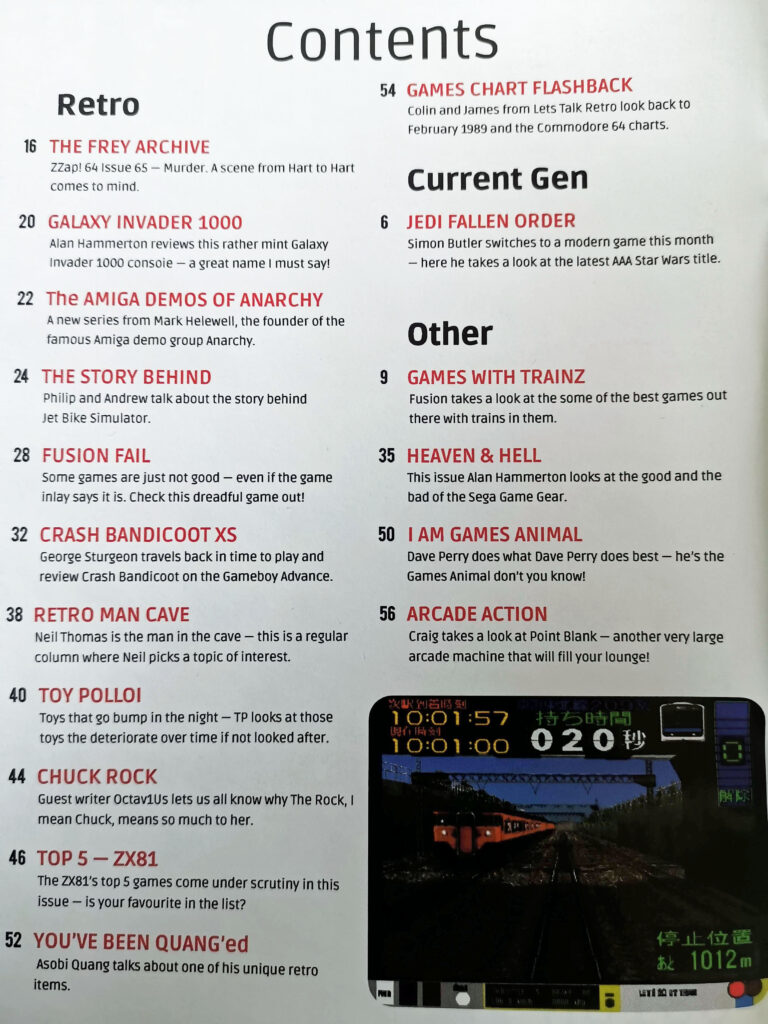 If you want to pick up a copy of Fusion #11 magazine then head on over to their website. The mag is only £3.99 plus postage, a very reasonable amount for such a well produced magazine. If you use the code ‘LYONSDENBLOG’ at the checkout you will also get 15% off the price making it just £3.40! I will also receive a tiny bit of commission which will help towards the hosting costs of running this blog. 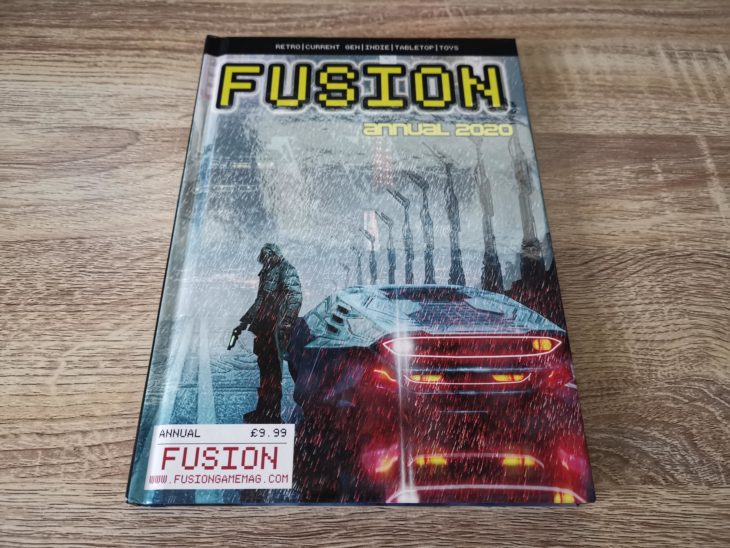 I’ve been buying Fusion magazine since its inception over a year ago. It’s a great little magazine that covers everything from retro gaming and culture to modern day classics. A couple of months ago they launched a ‘Fusion 2020 Annual’ Kickstarter campaign which I backed without hesitation. The annual arrived fresh off the printing press a couple of days ago so here’s a quick look at what’s inside. 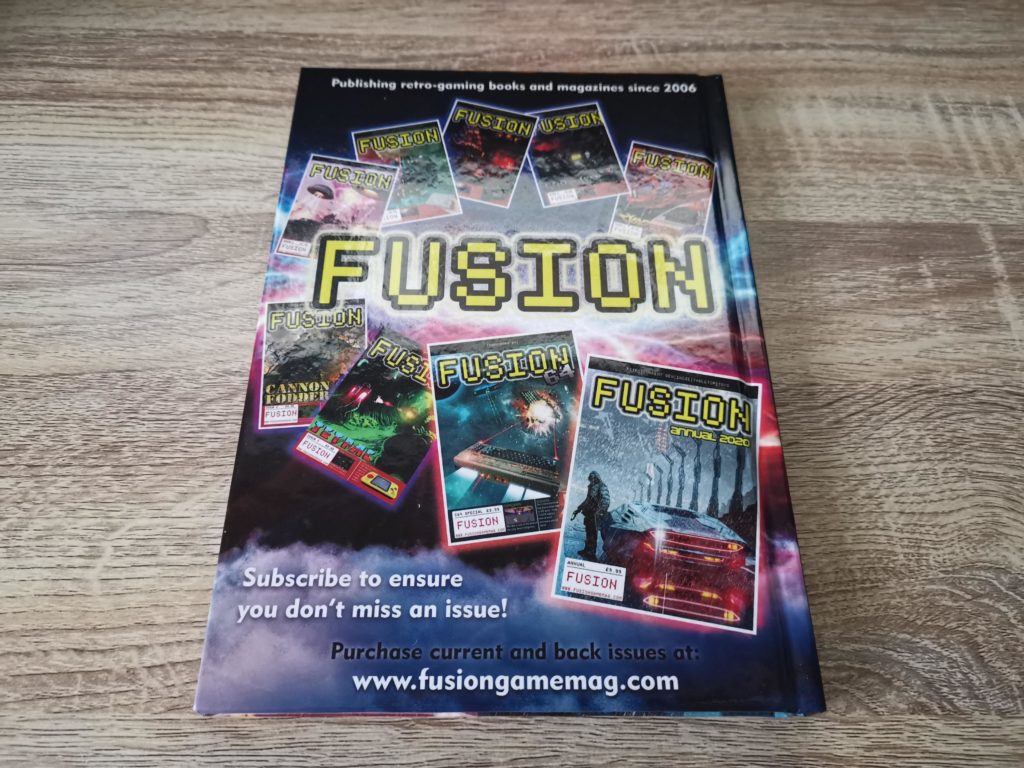 The first thing you will notice is that the annual is A5 in size rather than the more common A4 format. This is in keeping with the magazine itself which is published in this format. There were a whole bunch of stretch goals added towards the end of the campaign which means that it came packaged with a host extra goodies. 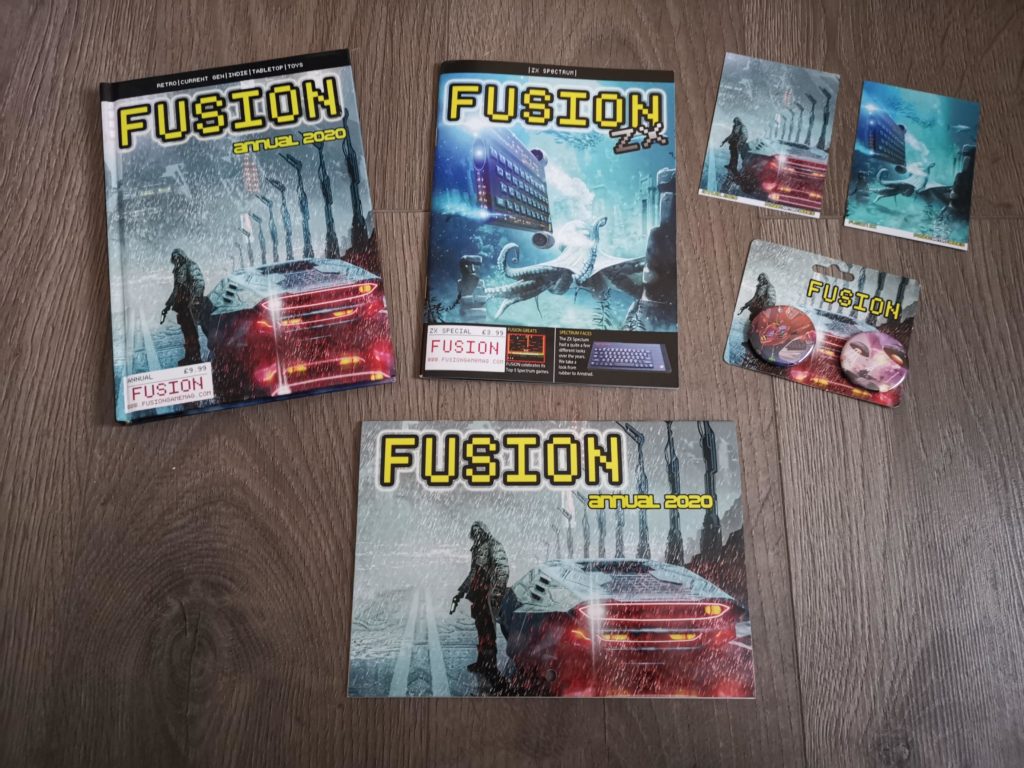 Included is an A5 calendar that unfolds to A4 and features some fantastic artwork from the magazine. There’s also a special ZX Spectrum themed edition of Fusion magazine that runs to 50 pages covering everything ‘speccy’. Finally there’s a couple of collectable art cards and two badges featuring artwork from previous magazine covers. 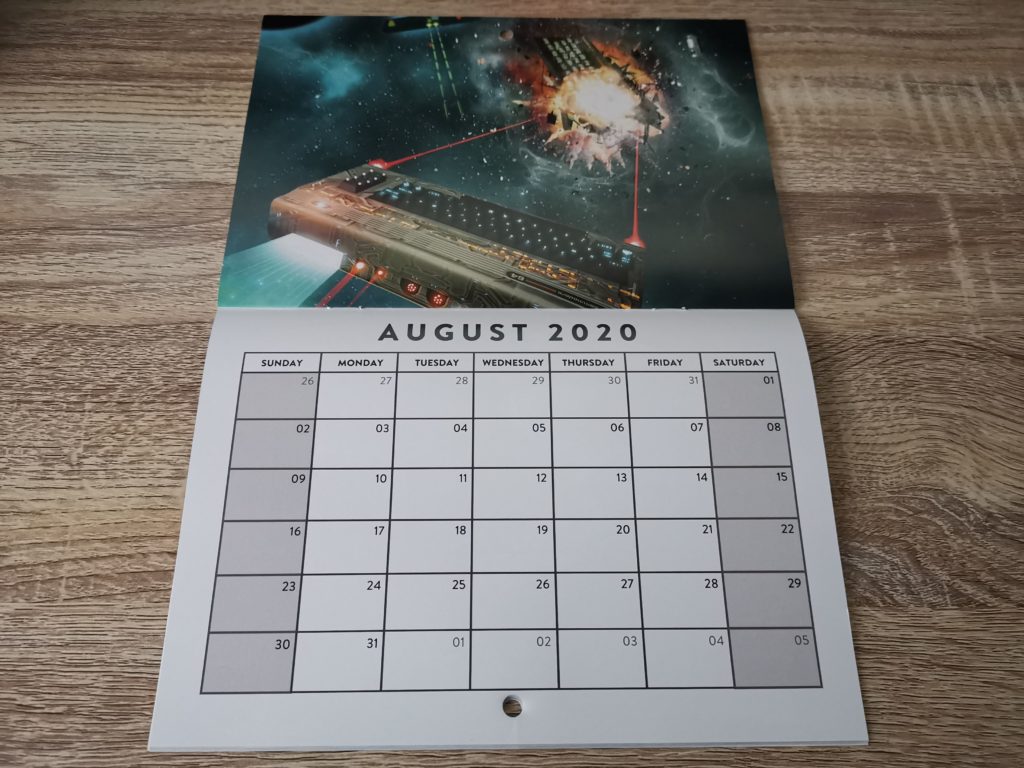 Below is a little peek at the contents pages so you can get an idea of exactly what you will find inside the annual. As you can see there’s a broad range of topics and time periods covered. 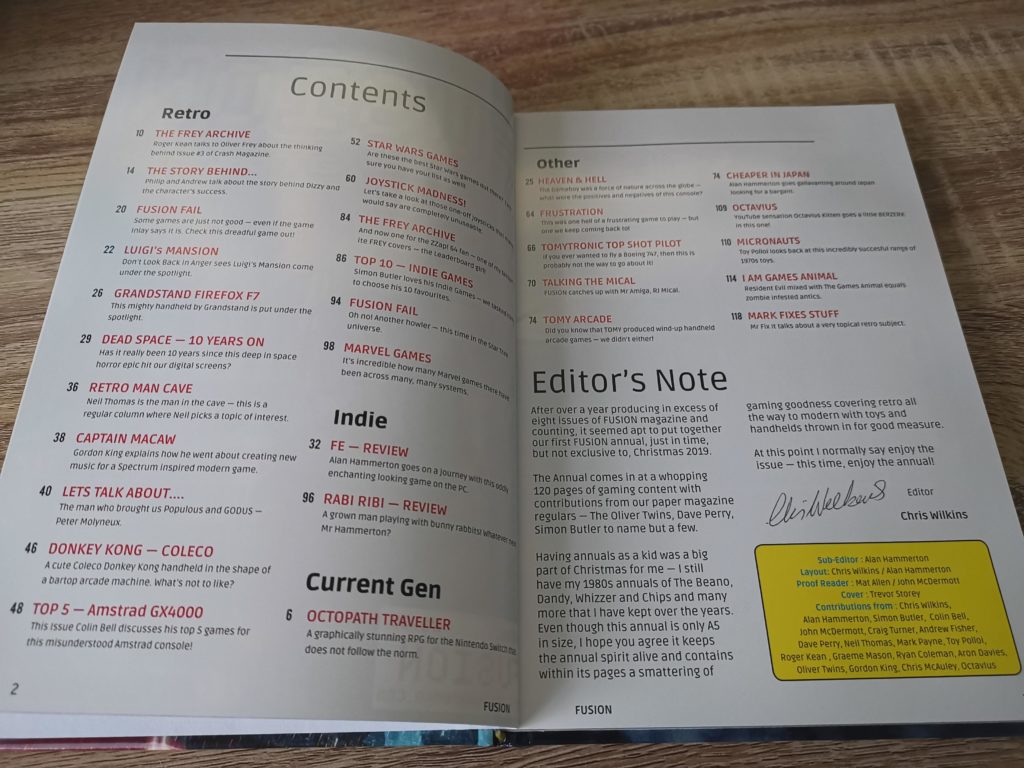 Taking a peek inside

As a huge Amiga fan I thought this interview with RJ Mical was especially interesting to read. 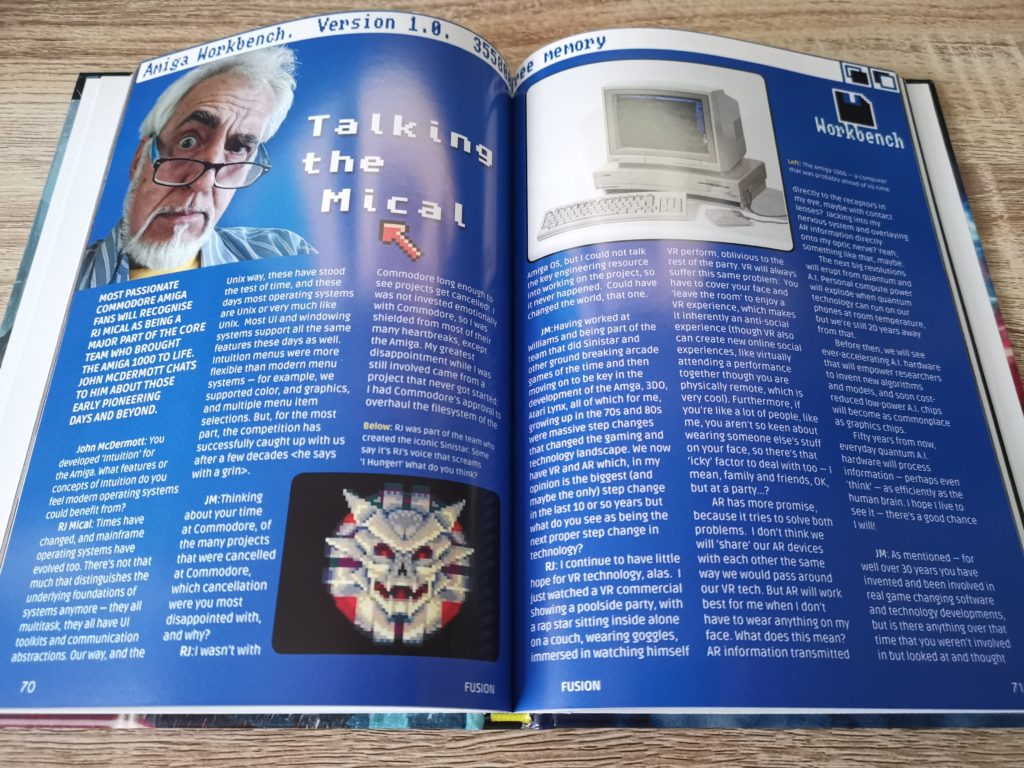 There’s plenty of nostalgic trips down memory lane to be found in the annual. Here’s one that struck a chord with me, I’ve still got this up in the attic somewhere! 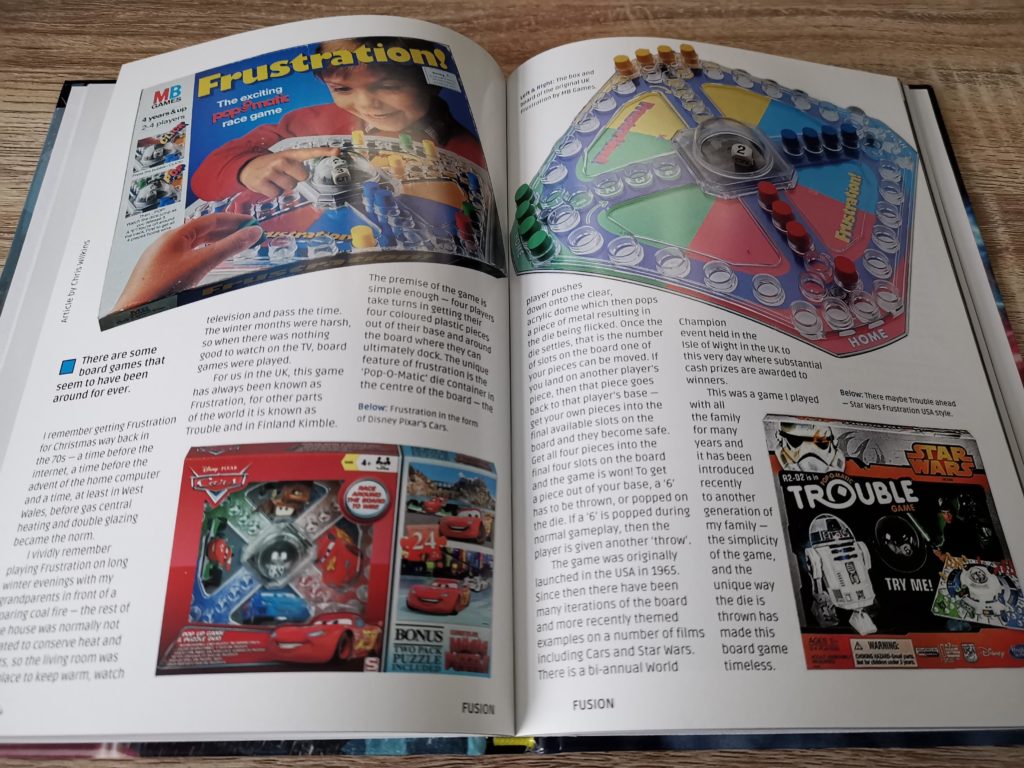 Another nostalgia hit, this time looking back at a particularly memorable Zzap!64 magazine cover. 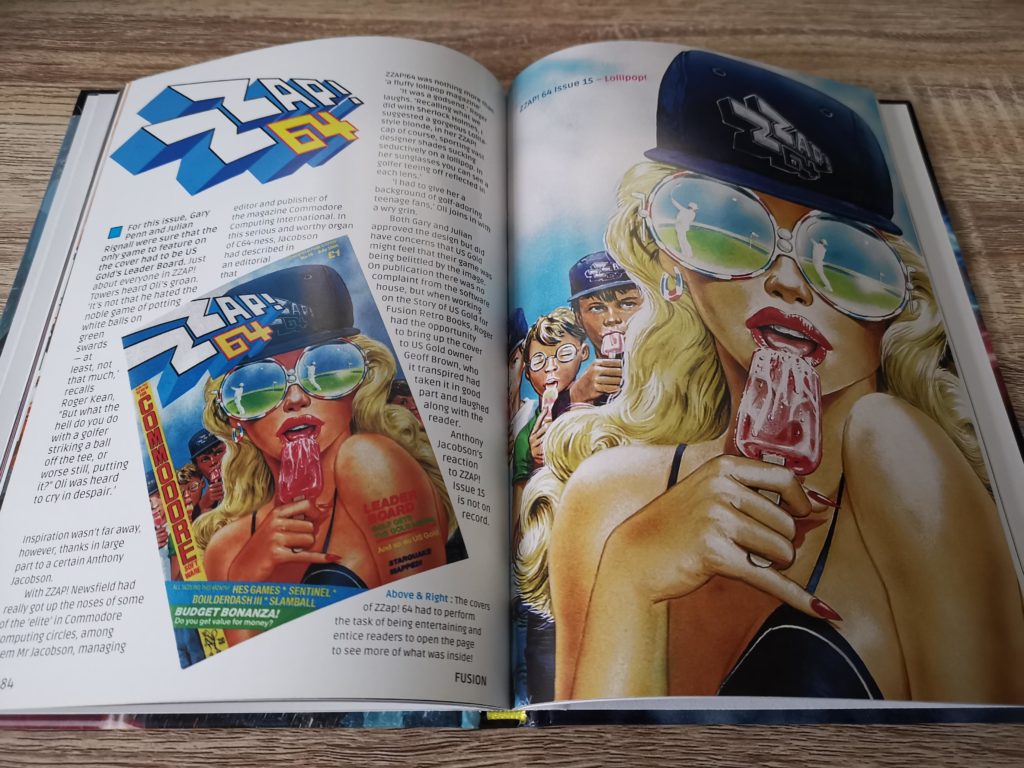 There’s also a feature I found particularly interesting as a retro game collector – ‘Cheaper in Japan’. This looks into sourcing games from the far east and demonstrates how much cheaper they can be than their western counterparts. Sadly this won’t help with the escalating prices of Commodore gear but something to bear in mind for Sega, Nintendo and PlayStation classics. 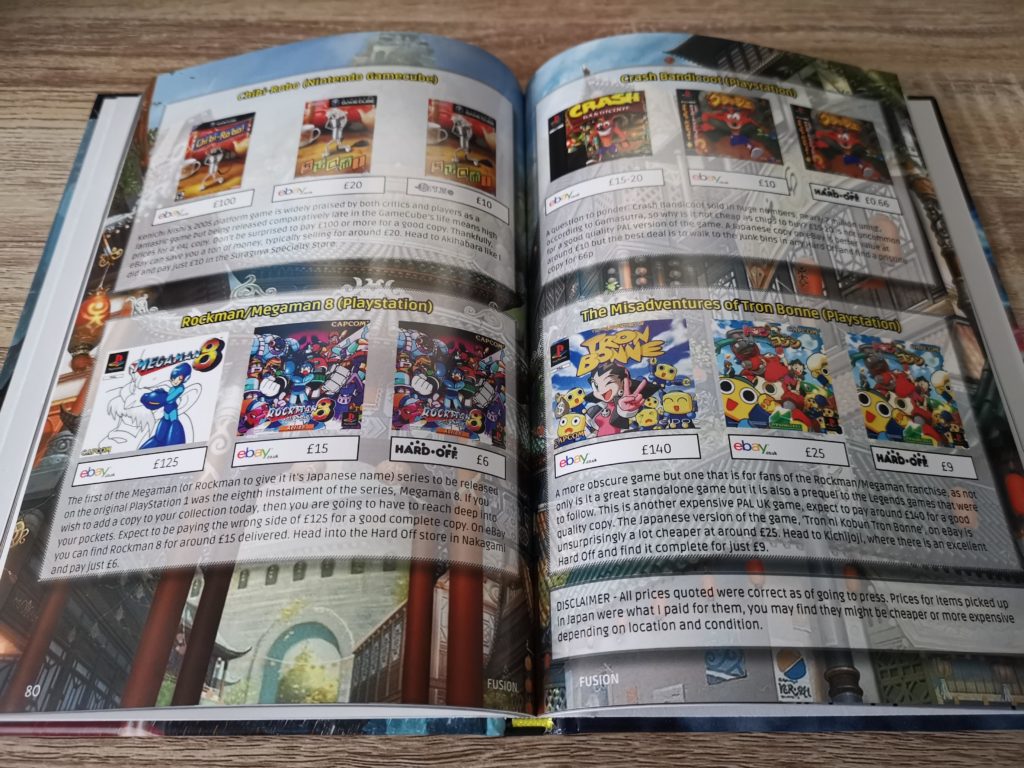 There’s some great modern day features too such as this look at the fantastic Logitech G920 wheel and pedal set. (I’m a big racing simulation fan when I’m not playing retro games and this is the wheel I use). 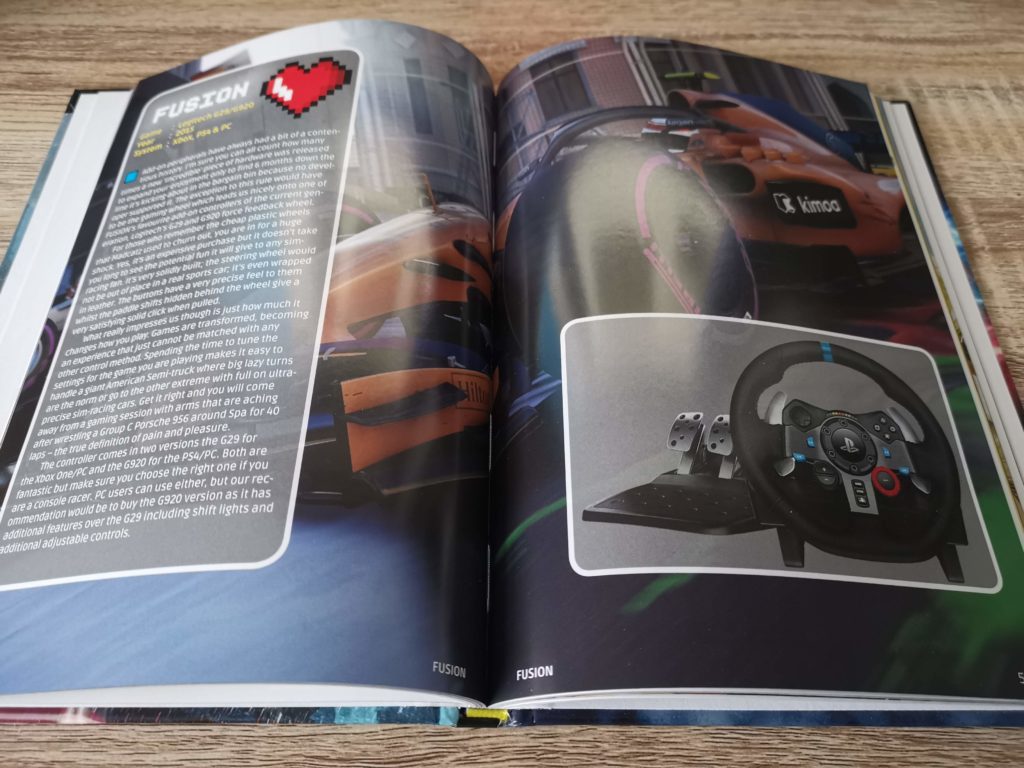 All in all this is a cracking addition to anyone’s book collection and I have no qualms about recommending it to people who are passionate about gaming. There’s literally something for everyone in here, especially if they’re interested in older games and systems.

If you’d like to get hold of your own copy you can buy the annual directly from the Fusion Retro Books website for the bargain price of £9.99. Please bear in mind that you won’t get all the extras described above as these were only for those who backed the Kickstarter campaign. 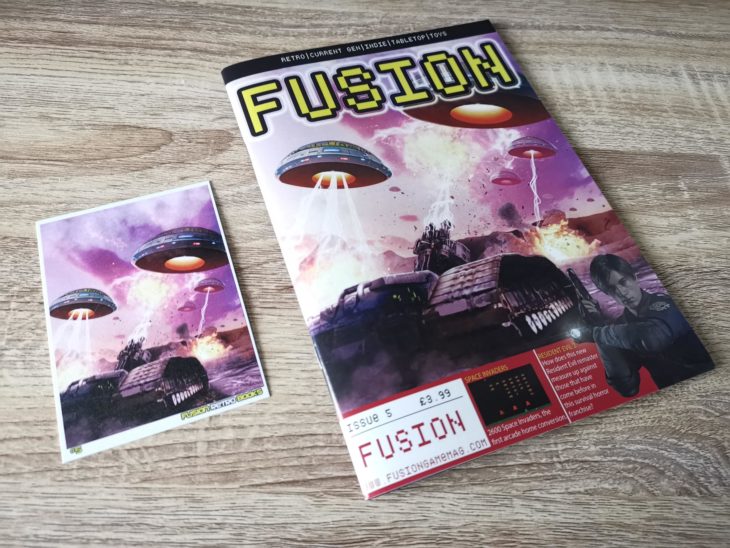 Received the latest edition of Fusion Magazine, issue #5, at the weekend. Have to say I’m liking the contents of this edition very much as there’s plenty of retro stuff inside. Stuff like the ‘Top 5 Amiga Games’ article, a look at Space Invaders, Ghostbusters 2, OutRun on Switch and more. A personal favourite of mine is the Retro Man Cave feature looking at old Flight Sims. Simulation games are personal favourite of mine – a genre which used to be massive in the but sadly neglected now.

If you’ve not come across Fusion magazine before then you might like to take a look at my overviews of the previous 4 issues here: Issue #1, Issue #2, Issue #3 & Issue #4.

I think I’ve sometimes been a little overly critical of the magazine in the past purely because it doesn’t always feature Commodore related content. However I think on retrospect this is a little unfair. The magazine caters for so many different systems and eras it’s unrealistic to expect coverage of favourites in every issue.

Anyhooo, if you want to purchase a copy of issue #5 of Fusion Magazine, head over to their website here. The mag is only £3.99 plus postage, a very reasonable amount for such a well produced magazine. 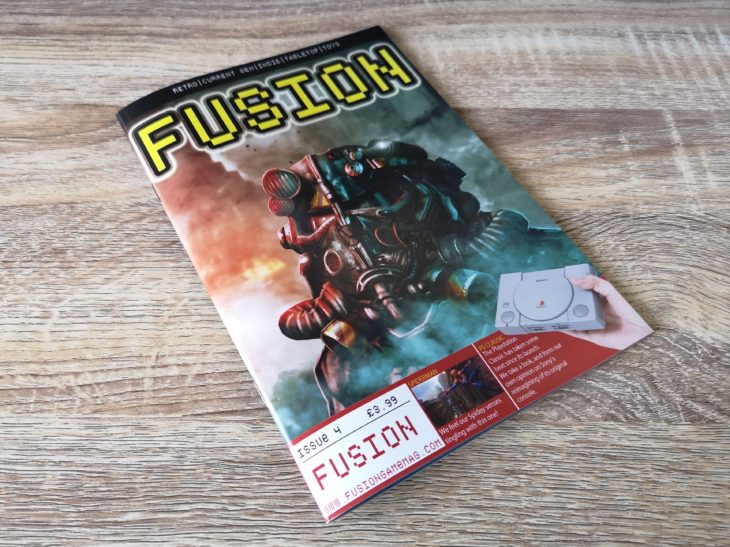 This morning the latest edition of Fusion magazine, issue 4, dropped onto my doormat. There’s quite a variety of interesting gaming content including a look at the Picade, PlayStation Classic and reviews of Spiderman and Hollow Night. There’s also articles about the Robocop arcade game, the history of Super Monkey Ball and even a ‘Retro Man Cave’ article looking at the Pioneer LaserActive.

There’s quite a bit more I’ve not covered too, but despite all that, I can’t help but feel short changed by the complete lack of Commodore related content this month. There’s simply nothing about my beloved machines at all. The most relevant thing I could find was an article about joysticks. Still, that’s the chance you take with any multi-format publication I guess. Hopefully in the next issue they will redress the balance!

Should any of those subject areas I’ve mentioned sound interesting then you might like to visit their website to order your own copy. However, if you’re mainly interested in reading about Commodore related stuff then I wouldn’t blame you for wanting to skip this issue.

If you’ve never heard of this magazine before then you might like to take a look at my overviews of the previous 3 issues here: Issue #1, Issue #2, Issue #3. 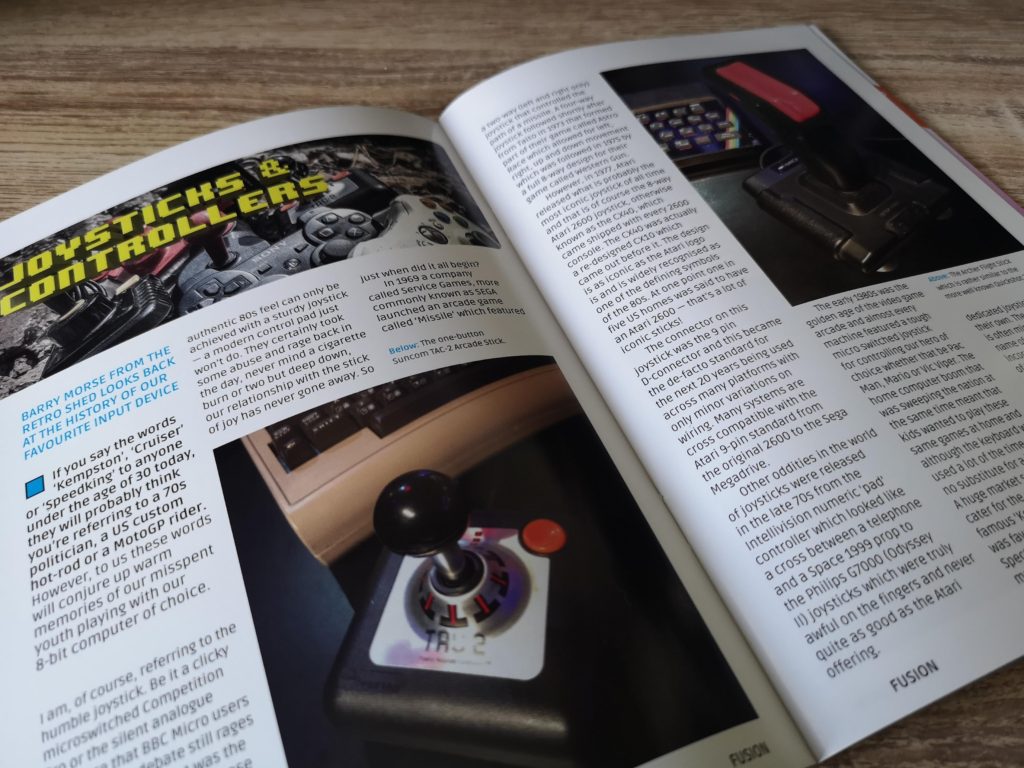 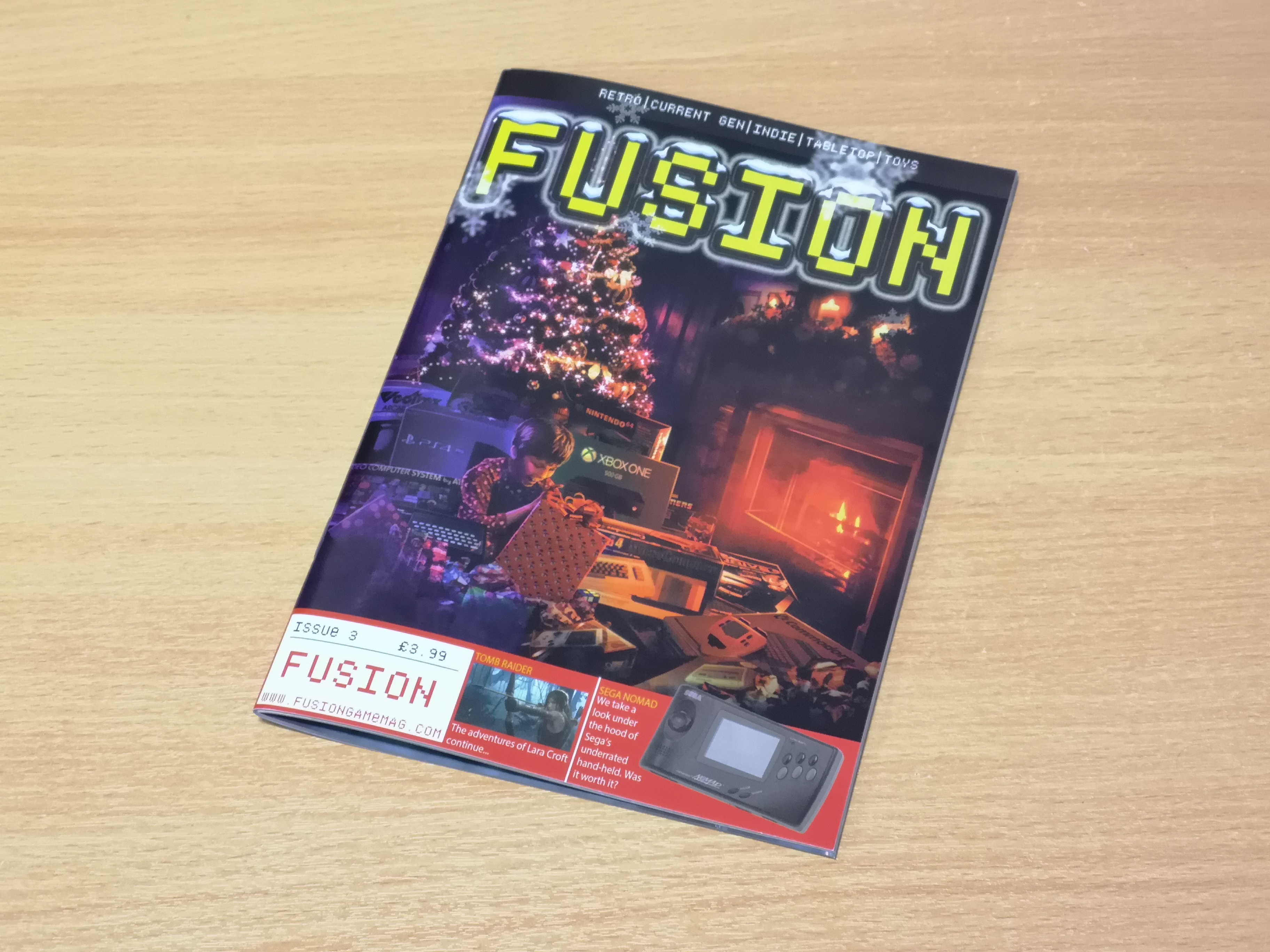 The latest issue of the relatively new retro/modern gaming mag, Fusion Issue 3 arrived this morning. Had a quick flick through and there’s lots of suitably ‘christmassy’ themed stuff in it to enjoy. The ‘Guide to gifts of Christmas past ‘ looked especially interesting. A great trip down memory lane for any kid that grew up during the 70’s and 80’s. Plenty of other stuff too including a review of the new NeoGeo Mini, a look at some of the best games you can get for the PS Vita and loads more. Definitely looking forward to reading it over the weekend in front of the fire! 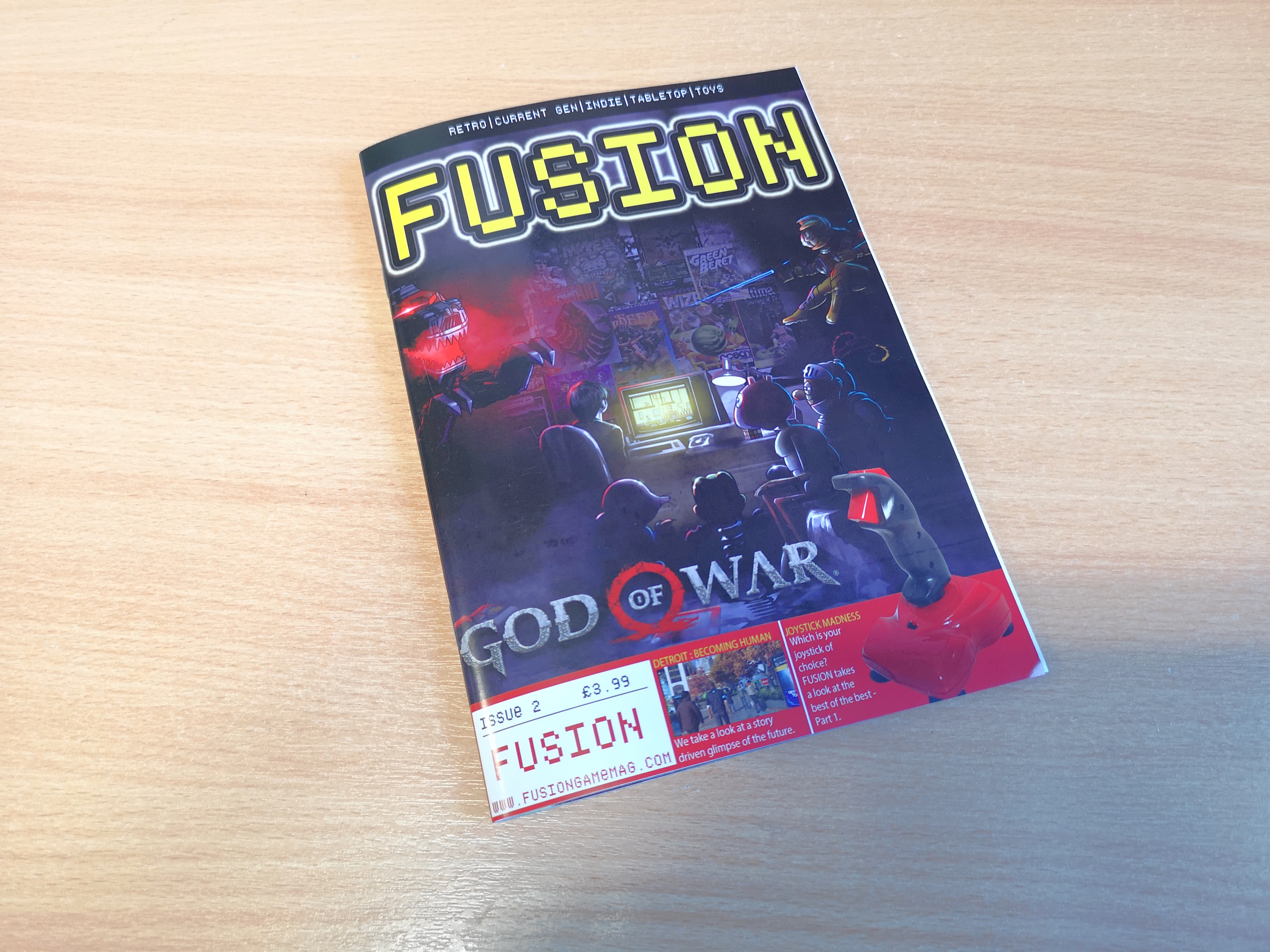 Just received Fusion Magazine Issue 2 in the post. If you’ve not heard of this yet it’s a great little UK produced A5 magazine that covers a mix of retro and current generation gaming. 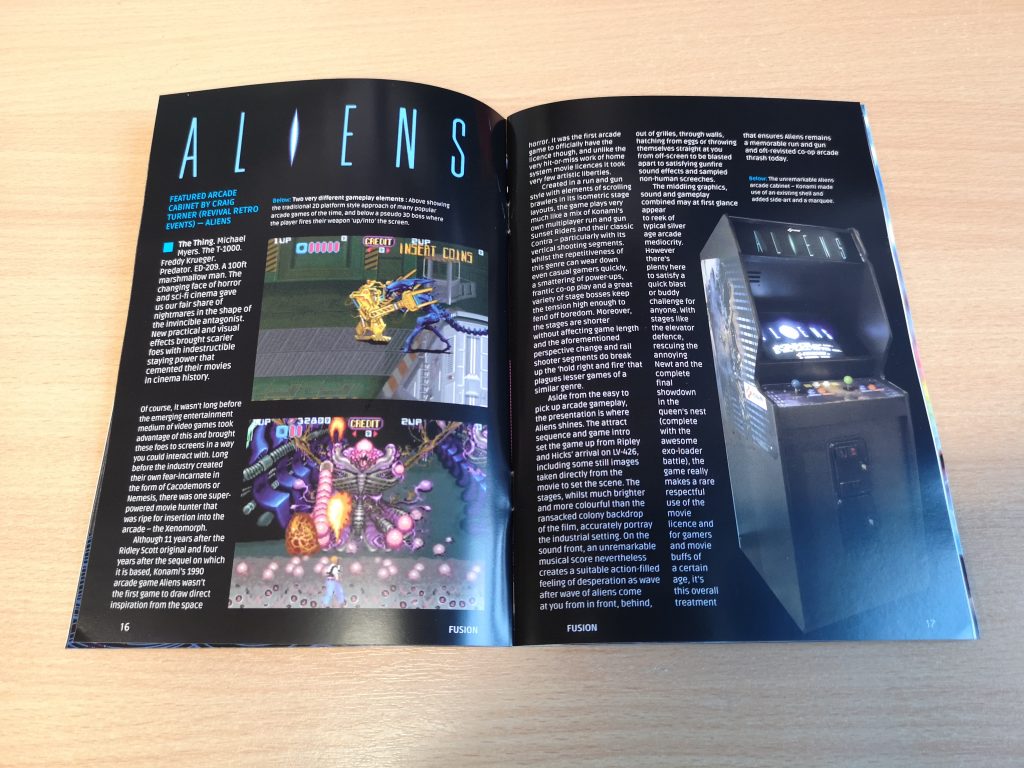 It contains almost 60 pages packed with articles and reviews about games old and new and hardware too. I particularly enjoyed the review of retro joysticks and was glad to see that my favourite joystick of all time (the Zipstick) got a much deserved 9/10 here! 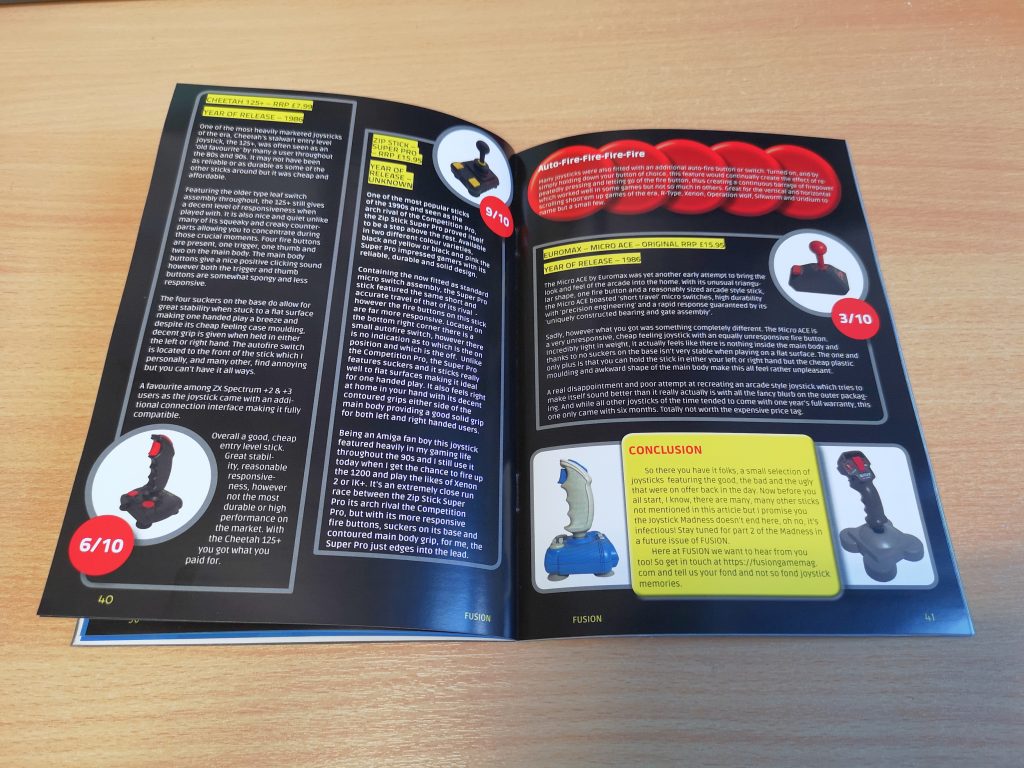 There are a great many interesting articles and features in the magazine but I especially enjoyed ‘A Sensible Tale’. This describes how the Amiga Format coverdisk ‘Cannon Soccer’ came to be made. This really took me back to Christmastime living with my parents in the early 90’s. It also brought back very fond memories of getting coverdisks in the age before everything became instantly available over the Internet. 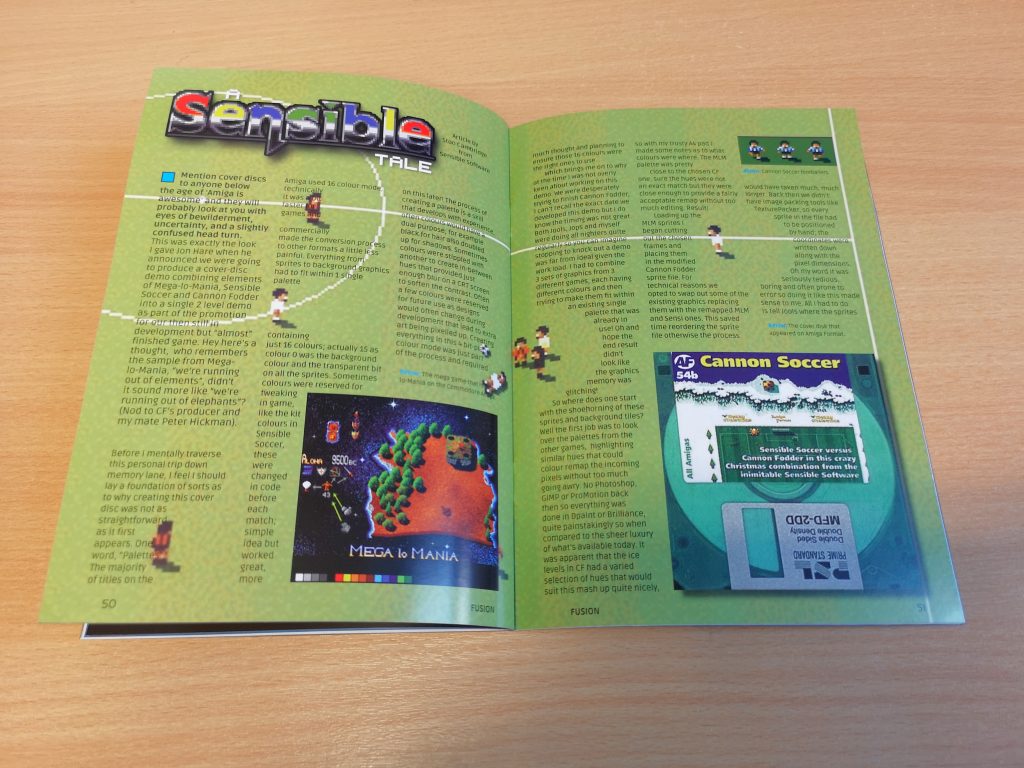 Another great article covering a more recent game was the ‘Last of Us Revisited’. I remember this really pushing my fat PS3 to the limit – the fans used to run at full pelt while playing this game and made my PS3 sound like a vacuum cleaner! 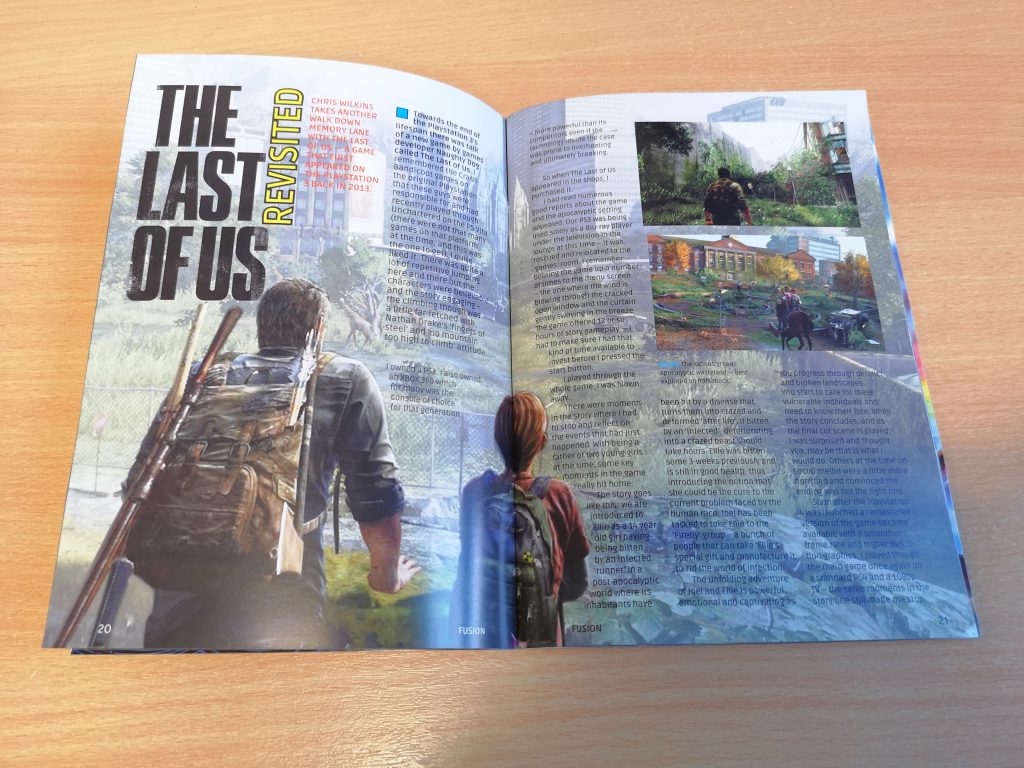 The Last of Us Revisited

This really is a great little magazine and I’ll definitely make a point of subscribing now that they offer this as an option. Anyway if you haven’t yet got your own copy and would like to know more then head on over to the Fusion website. 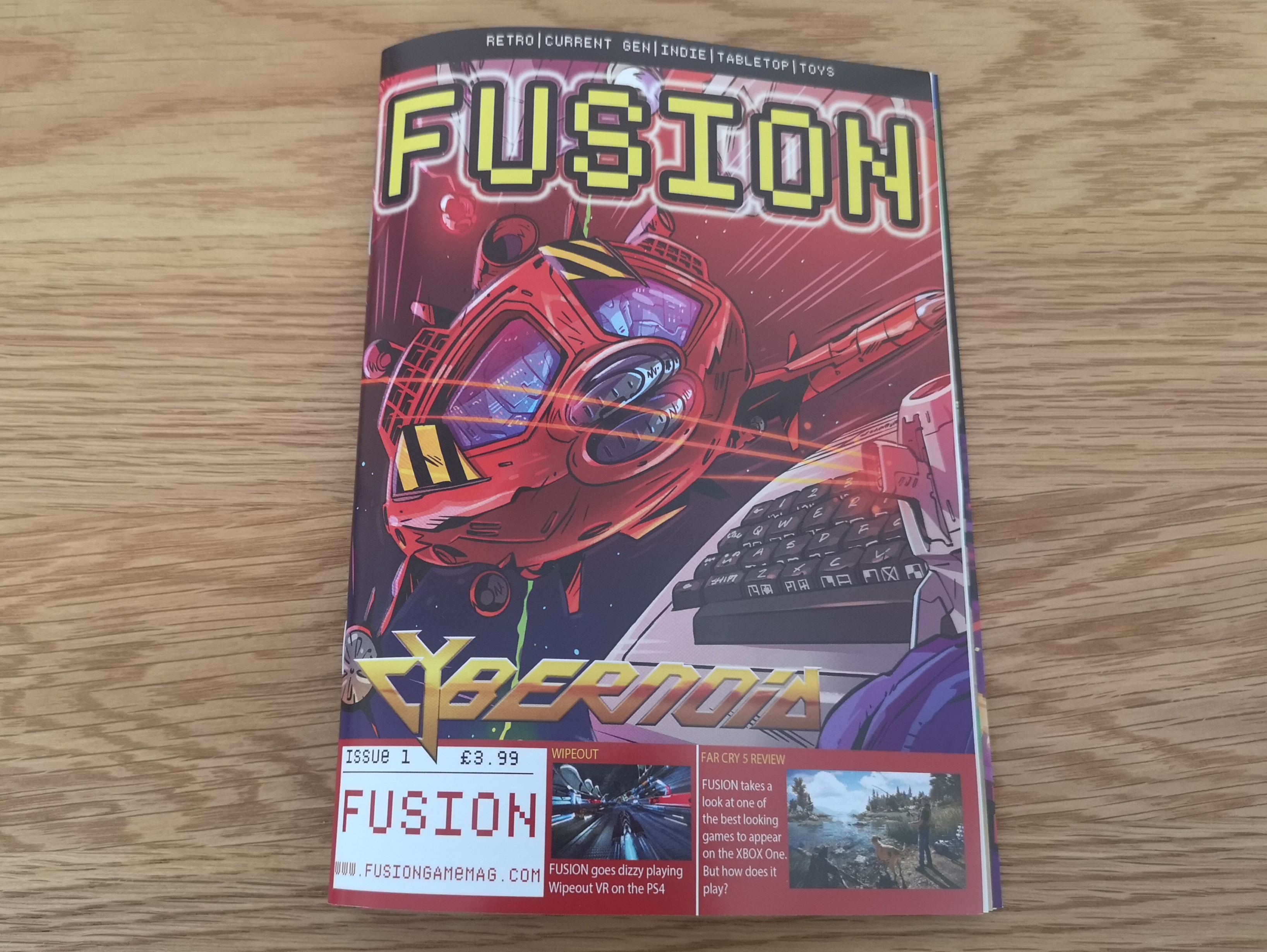 This has just arrived in the post – the very first issue of ‘Fusion’ a new gaming magazine that covers everything from old school 8-bit classics right up to the current 4K consoles. 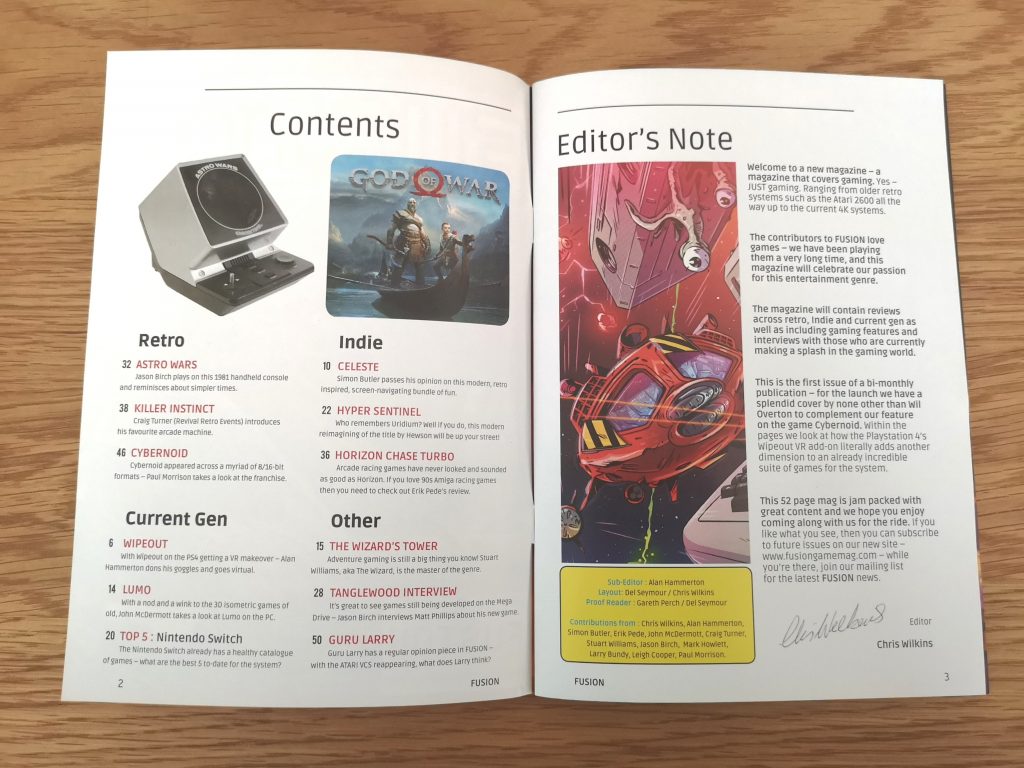 I spotted this on Kickstarter and pre – ordered it – it’s only £3.99 plus postage per issue. It’s A5 in size, really well produced in full glossy colour and contains 52 pages. 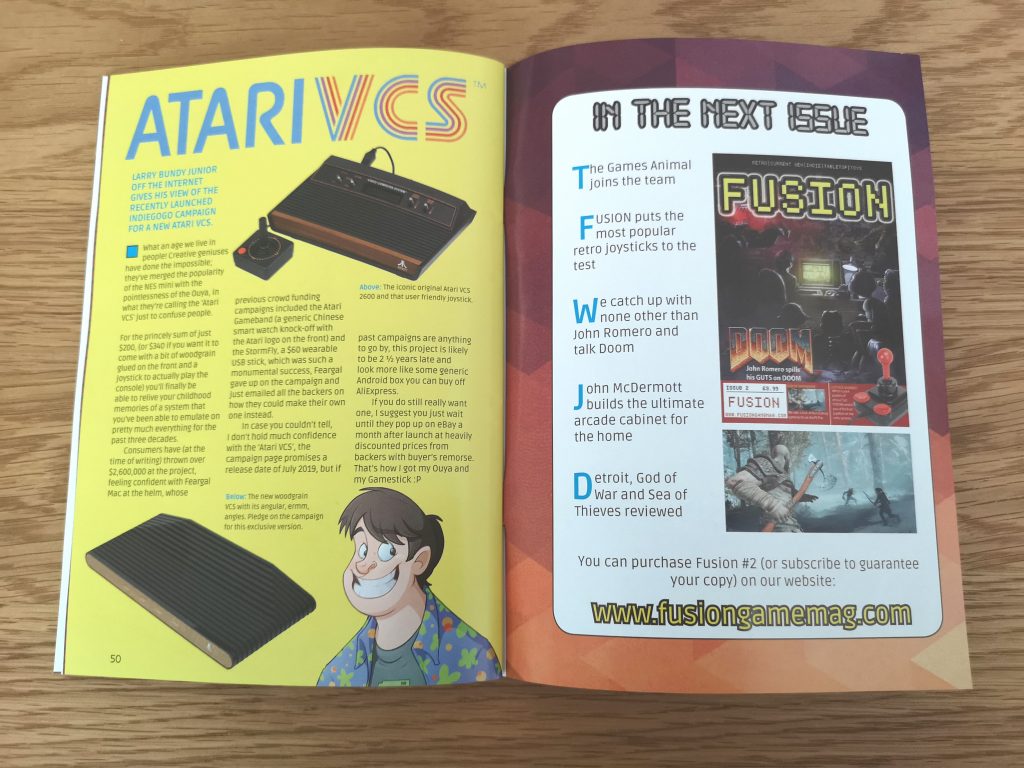 There’s a good mix of content and although I’ve not read the whole thing yet the quality of writing of the stuff I’ve actually perused has been great. The Atari VCS article (a project I’ve been following for a long time) particularly rang true. There’s a great review of Hyper Sentinel and even Far Cry 5! 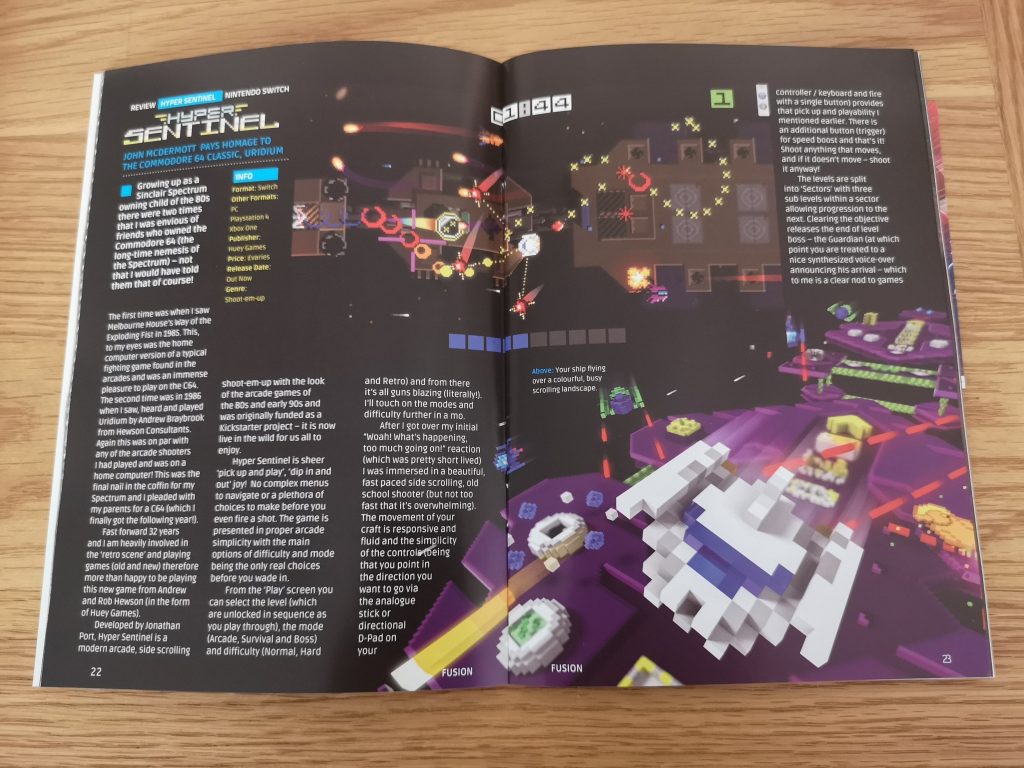 I must confess – at first glance I was a little disappointed that there wasn’t more coverage of retro games. However that was before I’d actually read through everything on offer. There’s a really nice mix of old retro games, brand new ones and a lot of stuff in between. I really liked the spotlight on new games that have a strong retro feel to them. Hyper Sentinel, Horizon Chase Turbo and Celeste for example. Those last two games I’d never heard of before but after reading about them in Fusion I couldn’t wait to add them both to my collection!

I’ve already placed my order for issue 2 and can’t wait for it to arrive. If you’d like to find out more about the magazine or order yourself a copy head on over to their website here.