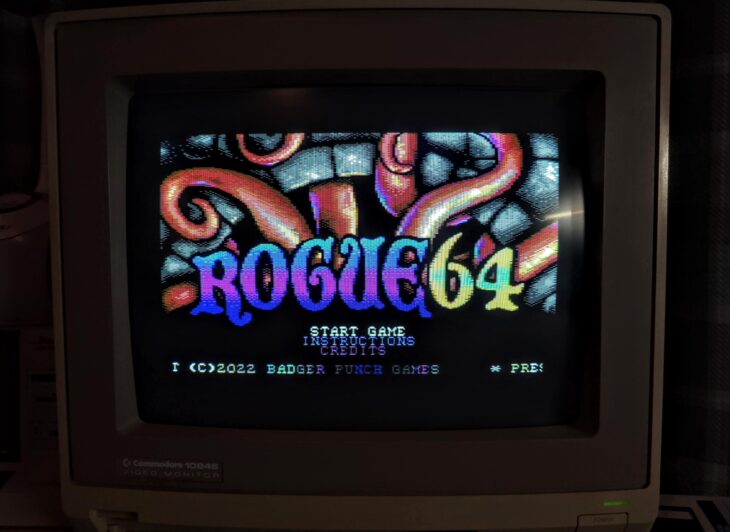 It’s been a good while since I reviewed a game but after recently picking up Rogue64, a new game that has just launched for the Commodore 64, I suddenly felt the urge to write one.

The game, created by Badgerpunch Games (credits in the image below), is available both physically (from Bitmap Soft) and digitally from Itch.io. priced at £35 and £4.60 respectively. I picked up my copy of the game digitally. 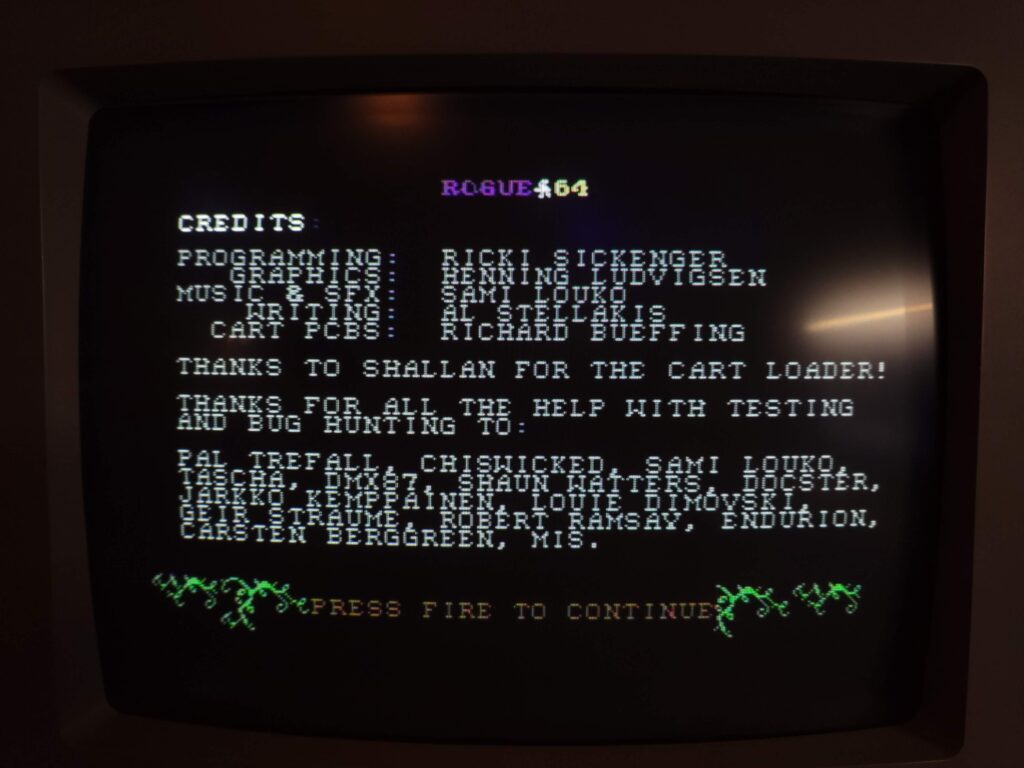 The download included a CRT cartridge image along with a very attractive PDF instruction booklet. An Easyflash cartridge version is also available to download. At the time of writing the game is only available in cartridge form (whether that be physically or digitally). 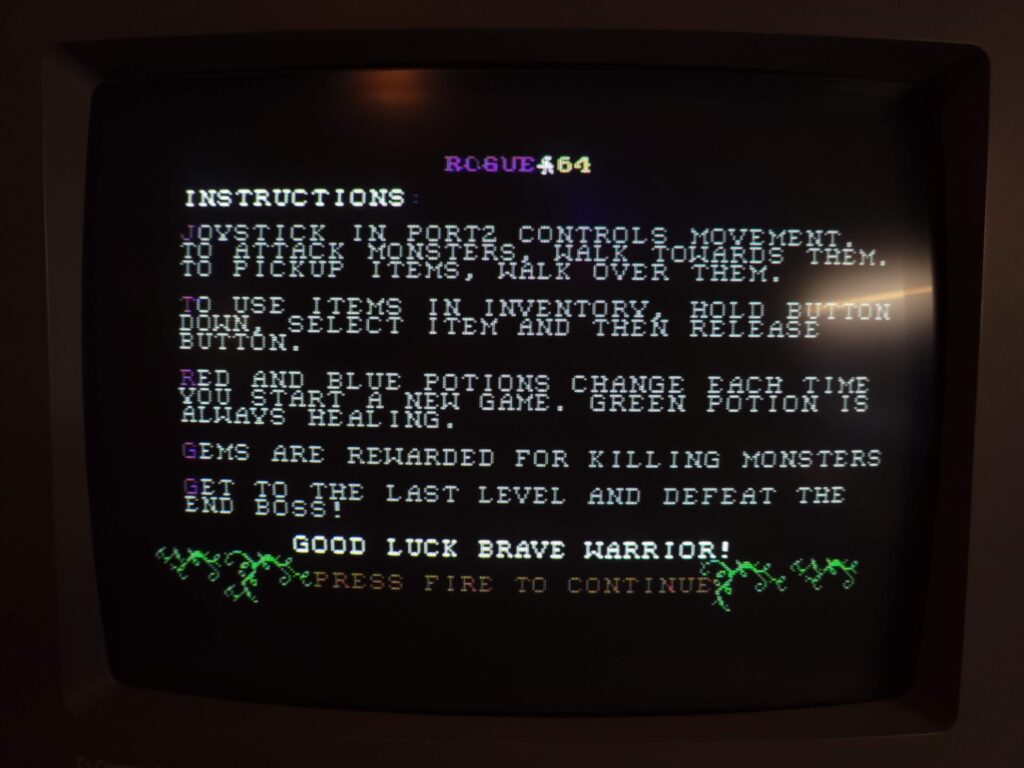 I ran the game via my 1541 Ultimate II+ cart (and via emulation) and it worked without a hitch.

The story, according to the games Itch.io page, goes like this: “You are Zendar the explorer, looking for treasure and fame in the dungeons of Mordecoom! Rumour has it that there is a magic item at the bottom of the dungeon, and you want it! The only problem is that there are evil cave dwellers lurking in the dark, waiting to attack as you travel deeper and deeper into this cube-like tentacle terror maze. The dungeons of Mordecoom are waiting!”

On first running the game there’s a ‘Bitmap Soft Presents’ screen complete with digitised speech before reaching the main title screen. From here you can choose to see the game credits, some instructions or begin your descent into the dungeons of Mordecoom… 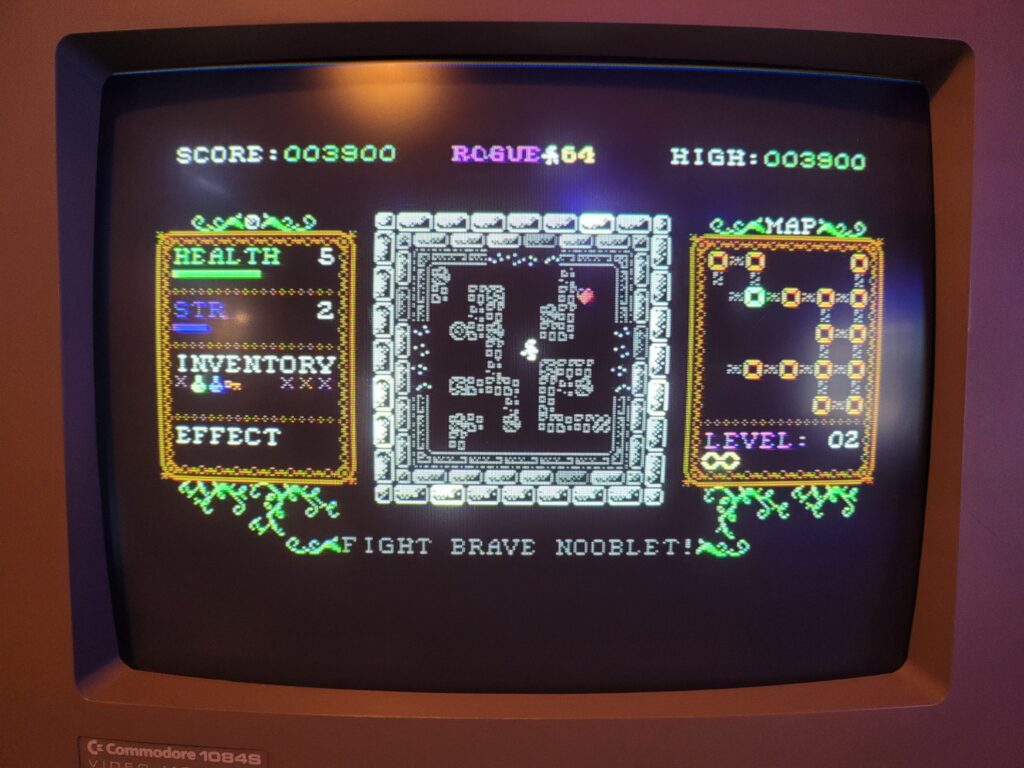 The game screen is attractively presented, which considering this is all you will ever see, is just as well. The game utilises the C64’s hi-res graphics mode to achieve a detailed and crisp display. A good use of colour ensures that the screen is still attractive to the eye and everything is presented clearly.

In time honoured tradition your score and high score are displayed across the top of the screen along with the name of the game. 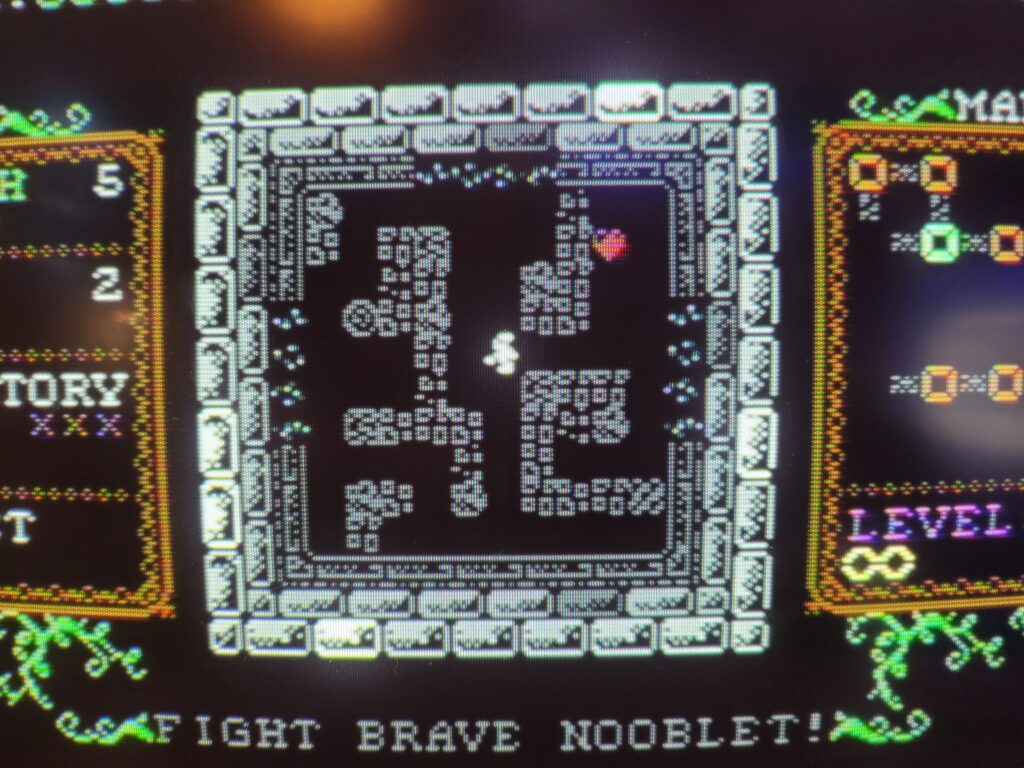 The main screen is split into 3 main sections. On the left is the information panel where you can see your health, strength, inventory and status effects. The central window is where we can find our hero and where all the action takes place. The right hand side displays a map of the current dungeon and is updated automatically as you explore. Each dungeon level has a name which is displayed across the bottom of the screen.

The aim of the game is to battle your way through multiple dungeon levels and ultimately face off against the final boss. Levels get progressively more difficult as you journey deeper down and new monsters are introduced. Thankfully our hero gets stronger too thanks to magical gems that can be found as you explore. These can grant him extra strength or increase his health bar.

Grabbing gold bars adds a nice chunk of points to your score whilst various potions scattered around each level can help or hinder your progress. Green potions always recover health but the red and blue ones could do anything at all. This is because their contents are randomised at the beginning of each game to add a bit of variety to each play through. Some of their effects include freezing time for a number of moves, killing all monsters in a room, making you drunk so you move erratically and so on. This definitely adds an interesting element to the game as you drink one for the first time to discover what it does!

Hearts can also be found on each level and will recover our hero’s health on contact. However unlike the green potions they cannot be carried so you have to decide on the most opportune moment to use them. 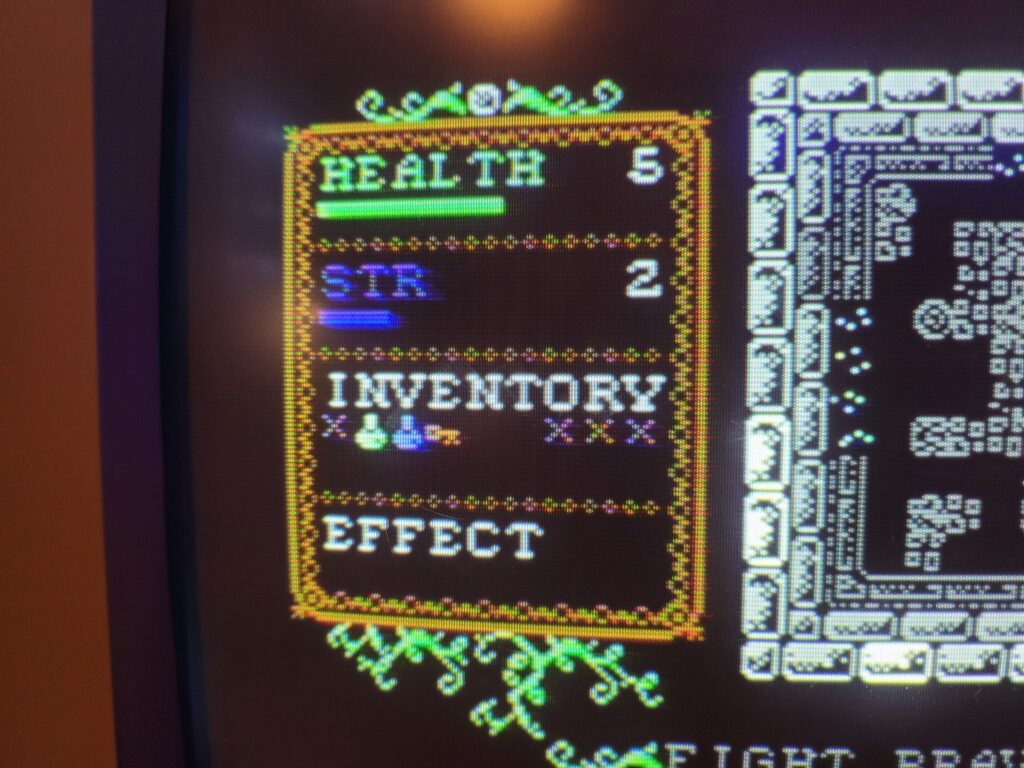 Each dungeon is split up into several small rooms and each of these is displayed in full within the central window. There’s no scrolling – your character stays within the confines of that window – it flips as you move from one room to another. Rooms tend to be a little maze-like in appearance and will incorporate one or more exits that allow you to move around the level.

Speaking of movement, our hero is controlled with a joystick in port 2. You simply push in the direction you want him to go. Objects can be picked up by simply walking over them and go straight into your inventory. I think the clever ‘use item’ system is worthy of a mention too. To select a potion within your inventory you hold down the fire button and move the stick left and right until it is highlighted and then simply release the fire button to use it. Very simple and slick, much like the rest of the game.

Enemies can be attacked by standing next to them and pushing our hero in their direction. Combat is automatic and uses RNG along with your strength, active potions and health to determine the outcome. As RNG is employed both your attacks and those of the monsters can and will miss their target occasionally so it pays to be careful. If a fight looks like it’s going the wrong way, running away is a viable option. You can come back to finish them off after you’ve healed up. It’s important to note that the game is turn based so enemies only react or move when you do which which makes it quite a relaxing experience overall.

Occasionally monsters can inflict a status effect on you that will last for a number of turns. I managed to get poisoned by a snake and kept taking damage after every move. If I hadn’t had a healing potion on me I would have been dead for sure. Likewise some of the potions you take have status affects such as making you stronger or intoxicated for a few turns and so on. This adds a certain level of unpredictability to the game and keeps you on your toes.

To progress onto the next dungeon you must find the exit to the current one (a yellow door) and also the key required to open it. Both of these are randomly somewhere with each level. You could choose to rush to the exit in each dungeon as it is quite possible to avoid contact with a lot of the monsters. However you’ll miss many vital upgrades doing this and end up being ill-prepared for the final boss fight. Far better to take your time and explore each room fully, defeating every monster along the way. Besides, this is what I’d call a ‘high score chaser’ game and the only way to get a decent score is to kill and collect everything in sight!

I really appreciate the way the game screen has been designed – it’s very aesthetically pleasing and everything you need is always visible. No need to toggle map screens or inventories – it’s all there, all the time. The game employs an auto-map feature which is pretty neat. When you enter a room it is added to the map straight away and all available exits indicated too. This makes it easy to see at a glance if there are any rooms you haven’t discovered yet. Occasionally you can pick up a potion that will highlight all the rooms in a level immediately but I didn’t find these terribly useful.

It’s all thoughtfully laid out, intuitive and everything fits in the space allotted for it. Each room fits within the confines of the central window and each dungeon map fits within the map window. Inventory space is very limited so it pays to use the stuff you find rather than try to hoard it for later. 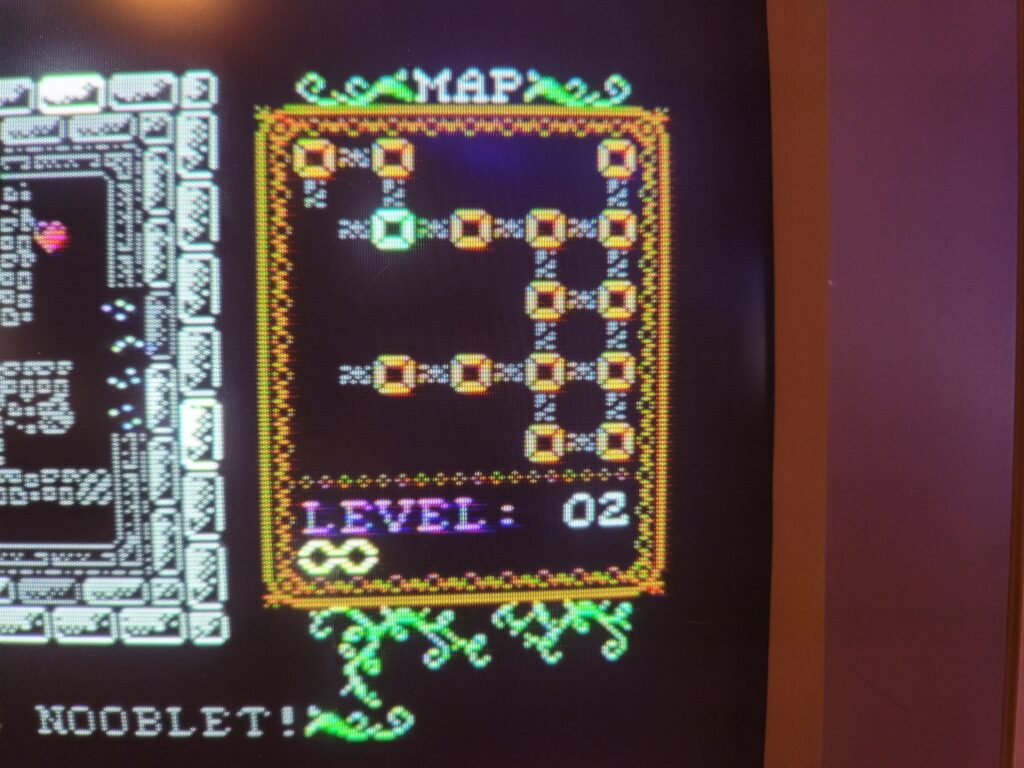 Sooner or later you will meet a grisly death and be greeted with the Game Over screen. This gives you a handy summary of your progress including level reached, score attained and what monster offed you. I should point out that there’s no option to save your progress with this being a ‘roguelike’ game so bear that in mind before you start your dungeon crawl. None of your progress or hero upgrades carry over to your next play through – you are back to square one every time. 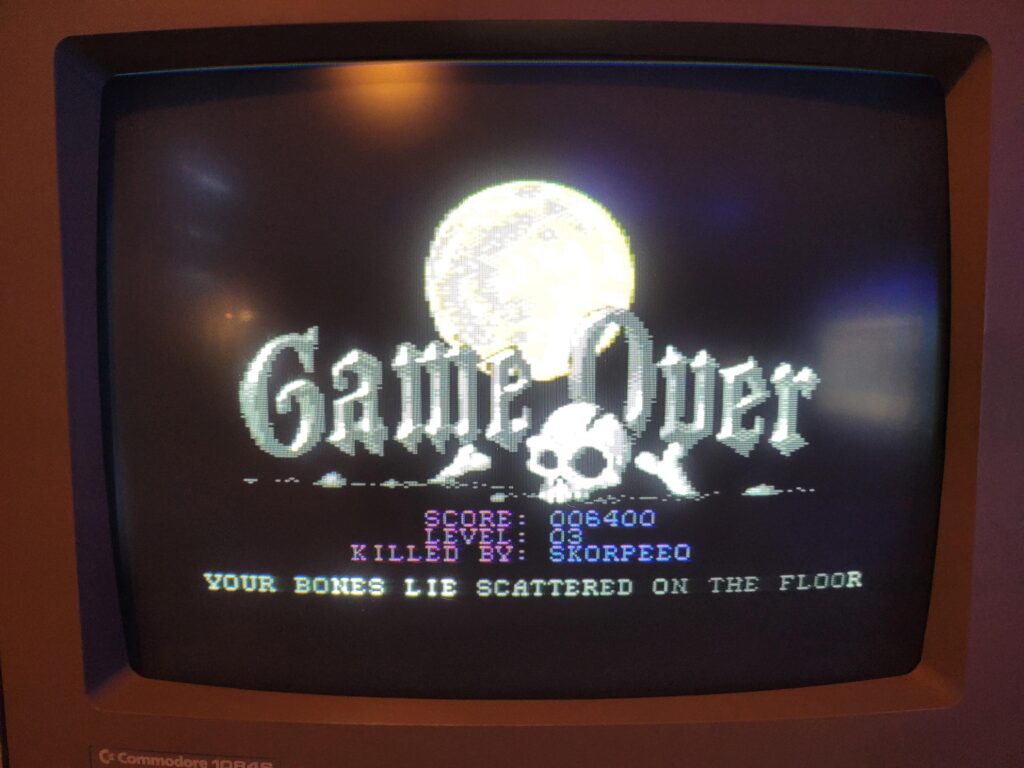 Playing throughout is a terrific SID tune that really suits the game and certainly never gets tiring. Sound effects are minimal but are there when required. Battling, picking up items, exiting a room and so on all have their own little effects that add to the immersion of the game. There’s also a screen shake effect that occurs when you take a hit in battle which is a really nice touch.

There are a few little things I wish had been incorporated into the game. For example, as great as the automap system is – it would be even better if it was able indicate the exit (after you have discovered it of course) to make it easier to find once you’ve located the key. Likewise if it could identify rooms with discovered but uncollected items I’d find that a real boon too.

Another feature I would love to see is an option to save your game, although I can understand why it’s not there. If you are 10-15 minutes into a game and something comes up it would be nice to have an option to save your progress. Whilst I don’t mind leaving my PC on for extended periods of time, leaving my 40 year old C64 on with a game paused is a definite no-no for me. Finally the big draw of replaying the game is to beat your high score – it would be awesome if the game actually saved this for posterity too.

I’m not a massive mobile gamer but occasionally I’ll stumble across a game that I like to while away my lunch hour playing. This is one of those games. The turn based combat, addictive gameplay and simple control system make this a perfect game to play on a C64 emulator on my phone. There are quite a few C64 emulators out there for Android users; I use C64.emu and this game runs absolutely flawlessly on it. An added benefit of playing on my phone is that I can just flip it shut and the game is paused indefinitely until I come back to it. Nice! If smartphones had existed in the 80’s I would have failed all my ‘O’ Levels for sure… 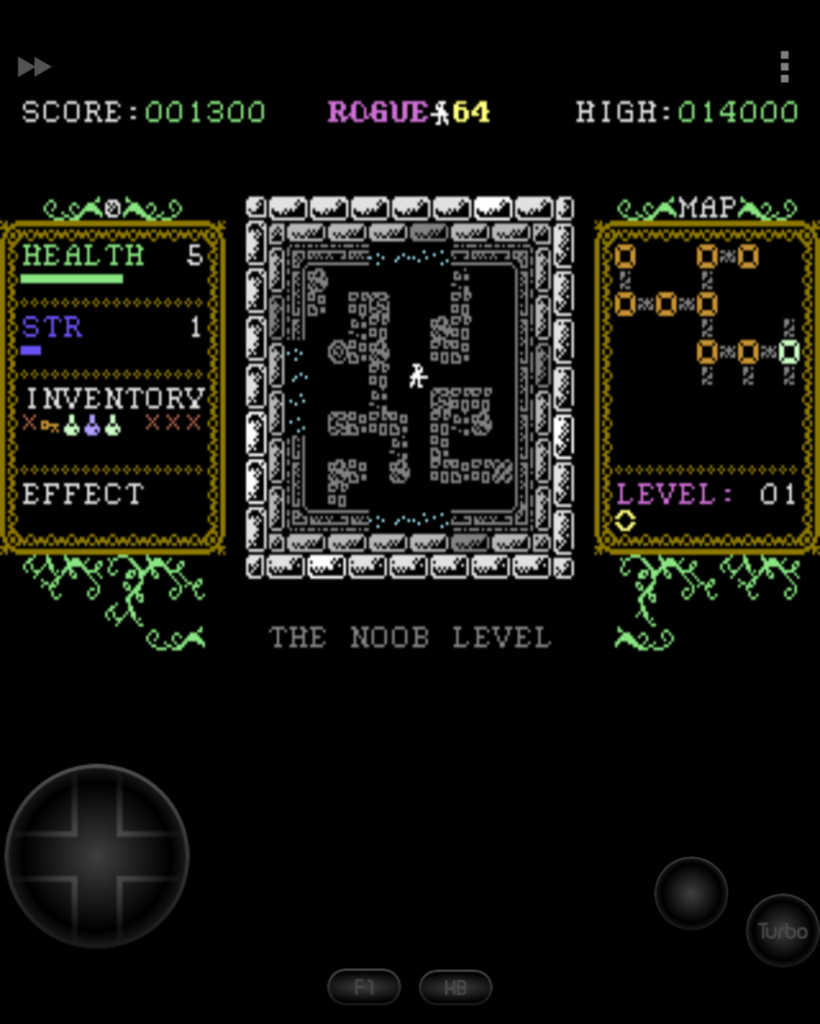 Rogue64 running on my phone via the C64.emu emulator

Normally roguelike games infuriate me. I hate losing my progress and having to slog through a game just to get back to the where I was up to. That’s definitely not the case with Rogue64 though. Through a combination of slick game design, simplified controls, easy to master turn based combat not to mention a great SID tune and a fair but addictive gameplay loop, Rogue64 keeps me going back for ‘one more go’. Sure I could kick myself when I die stupidly after failing to reach the next dungeon, but there there’s also a real sense of satisfaction when I finally do and beat my high score in the process. I’ve not yet reached the last level of the dungeon or seen the boss monster but I’m determined to keep trying until I do!