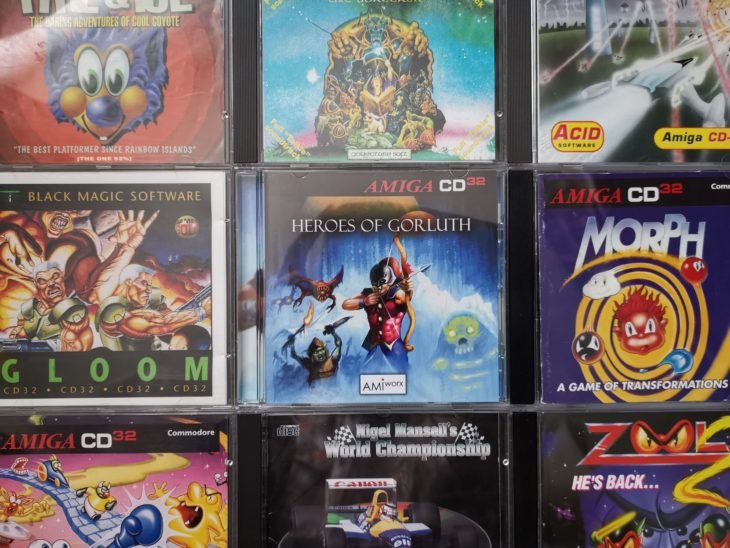 This ‘compatibility list’ features all the games that I have played on an Amiga CD32 with a TerribleFire 330 card installed. I have indicated whether each game is compatible (green), partially compatible (amber) or incompatible (red).

Please note that I haven’t exhaustively tested each game to completion (as much as I’d love to, I simply don’t have the time). Consequently there could be the odd issue that I’ve yet to discover even if a game has been given a green light.

These games are all from my personal collection so if a game isn’t listed here then it’s because I don’t own it. If anyone reading this knows of any other titles that do or don’t work on a TerribleFire 330 equipped CD32 then please leave a comment below. I’ll make sure those titles are added to the list.

Crashes after inputting the code from the code book.

As you would hope for a new game, this works perfectly.

Beneath a Steel Sky

Dangerous streets won’t load and Wing Commander crashes at the start of the intro video.

Fury of the Furries

Works perfectly and the extra grunt means you can run the game at max graphical settings with no slowdown!

Works perfectly and the extra power of the 030 processor means the game runs really smoothly!

Works perfectly and the extra power of the 030 processor means the game runs better.

This is a recent game and actually lets you select a special 68030 version of the game from a startup menu. Works better than on a stock CD32 as a result!

Won’t load at all.

Works but the initial menu screen where you select Lotus 1, 2 or 3 doesn’t display. You can hear the music in the background and if you press fire it will load Lotus 1 just fine. You can access the other 2 games by blindly selecting them (pull down once or twice before pressing fire).

Plays fine but there is occasionally a little bit of audio corruption with the music.

Works but graphics flicker during gameplay.

Initially appears to work then exhibits various weird behaviour during play like slowing to a crawl and ultimately crashing with a screen full of garbage.

As would be expected for a brand new game this works flawlessly.

Gameplay is fine but there’s some annoying audio corruption (white noise occasionally playing instead of music) that I’ve not got to the bottom of. So far I’ve only experienced this problem with this game and Lumberjack (both new games).

Locks up after completing the first level.

This is a recent game and actually lets you select a special 68030 version of the game from a startup menu. Works better than on a stock CD32 as a result!

Refuses to even load.

This loads with all the colours messed up when the TF330 is installed, however if you search online there is a fixed ISO which runs properly. Game runs much better than on a stock CD32 but does have a tendency to lock up so save often. I’m hoping this might be due to my PSU being inadequate so will update this if I manage to get hold of a more powerful replacement.

UPDATE: So I bought a stronger PSU for my CD32. A 57W unit capable of providing stable 5V (up to 4.2A) and 12V (up to 3A) and… it didn’t make a blind bit of difference to the performance of the game sadly.