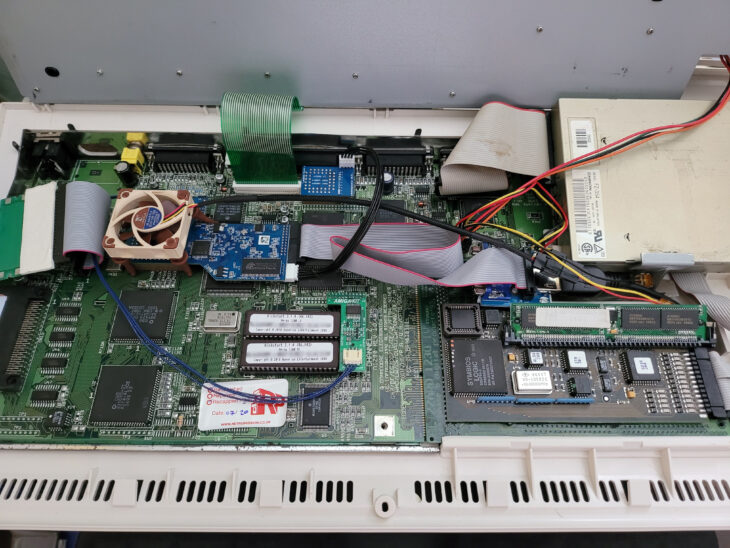 In Part 1 I tried some simple passive cooling techniques to increase airflow with the aim of cooling my A1200. This time around I’m going to add a hardware device to my A1200 that will monitor the internal temperatures and also add a cooling fan. Spoiler alert – this time there will be some decent results!

To be honest I probably would have stuck with the modest improvements made from the passive cooling mods had it not been for the extra heat generated by fitting my Indivision AGA Mk3 Flicker-Fixer. When I began to see artefacts on the screen caused by the Lisa chip working overtime and heating up I knew it was time to step up my game.

I discovered this Sensors Module quite by accident whilst browsing the AmigaKit website. It’s a little battery-backed clock module that incorporates an ambient temp sensor on the board and can be expanded to include a second temperature sensor probe by means of a small 3-pin connector. 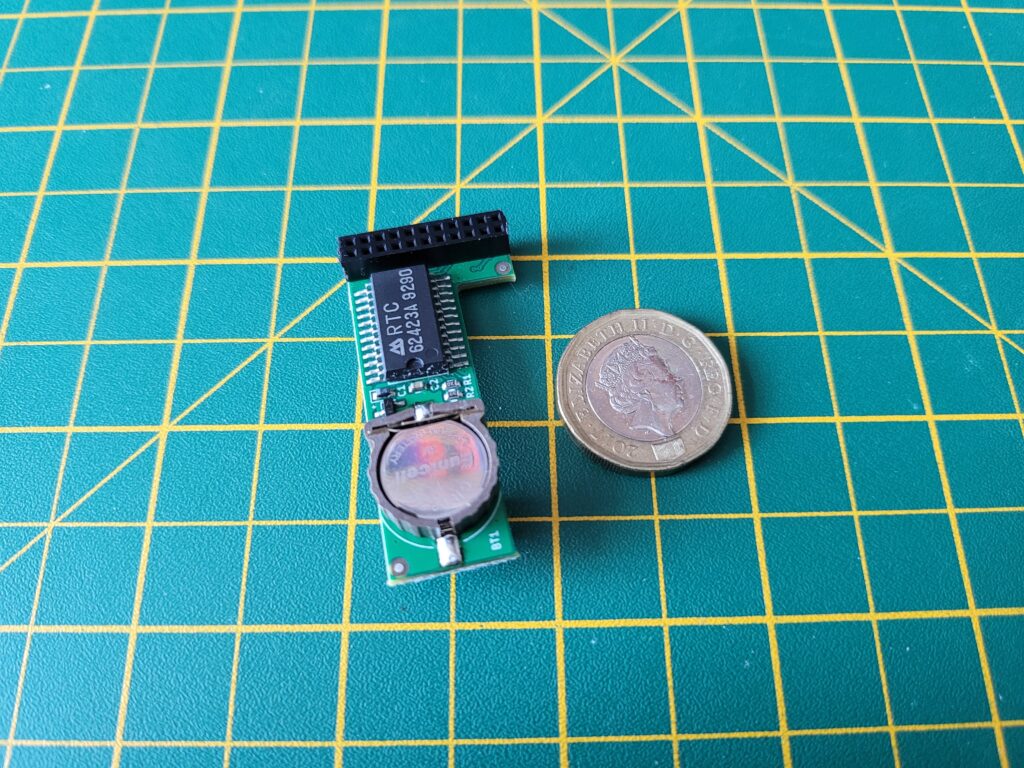 In addition to monitoring temperatures and providing a clock function this module also incorporates a 5V sensor that can monitor the stability of the A1200’s 5v power rail. 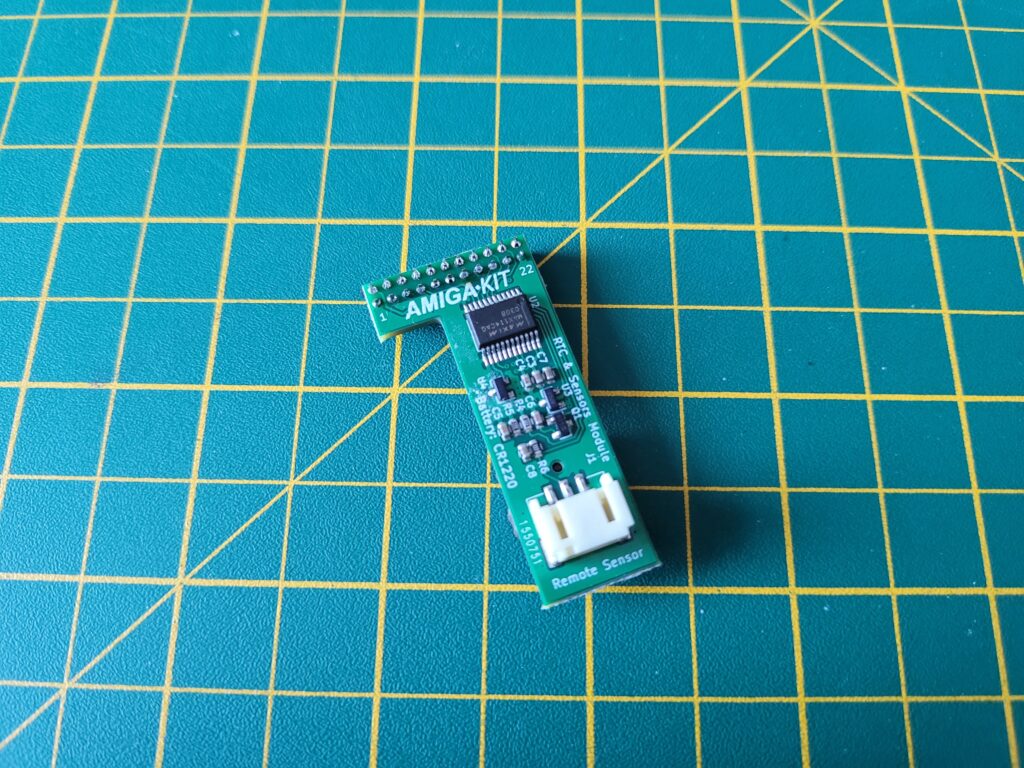 Handily it is also able to monitor the power level of its own battery for the clock module. 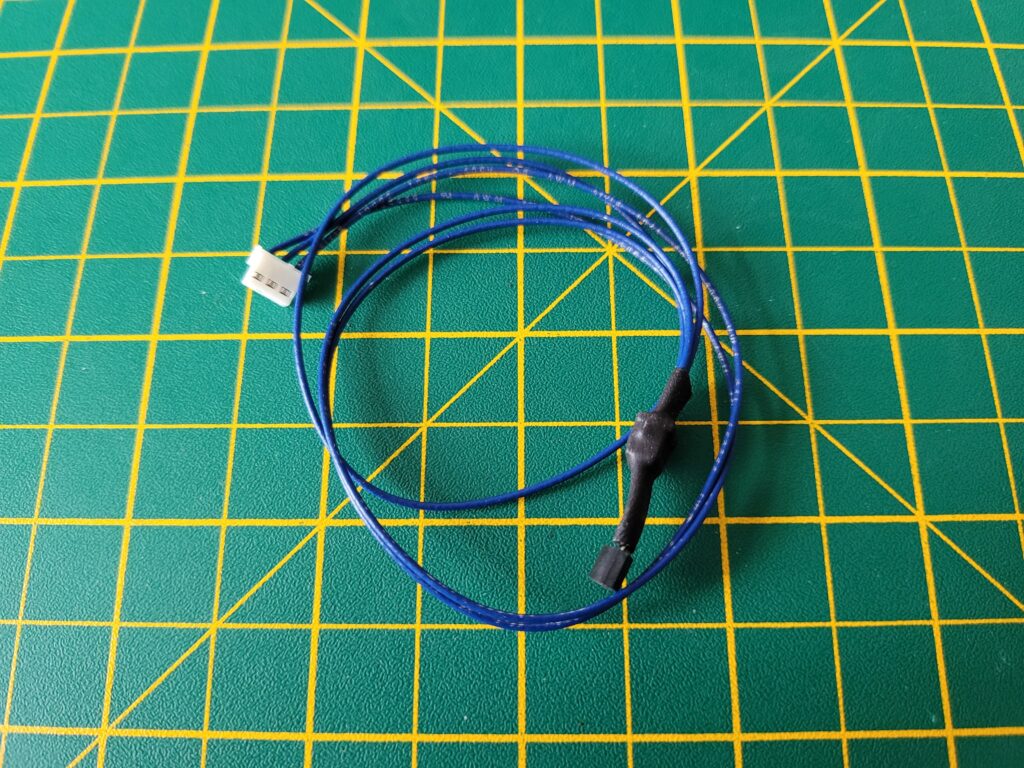 The temperature probe is sold separately and is available here. It simply attaches to the 3-pin socket on the sensor module and allows for monitoring a second location within the Amiga or specific chip depending on where you place the end of the probe. 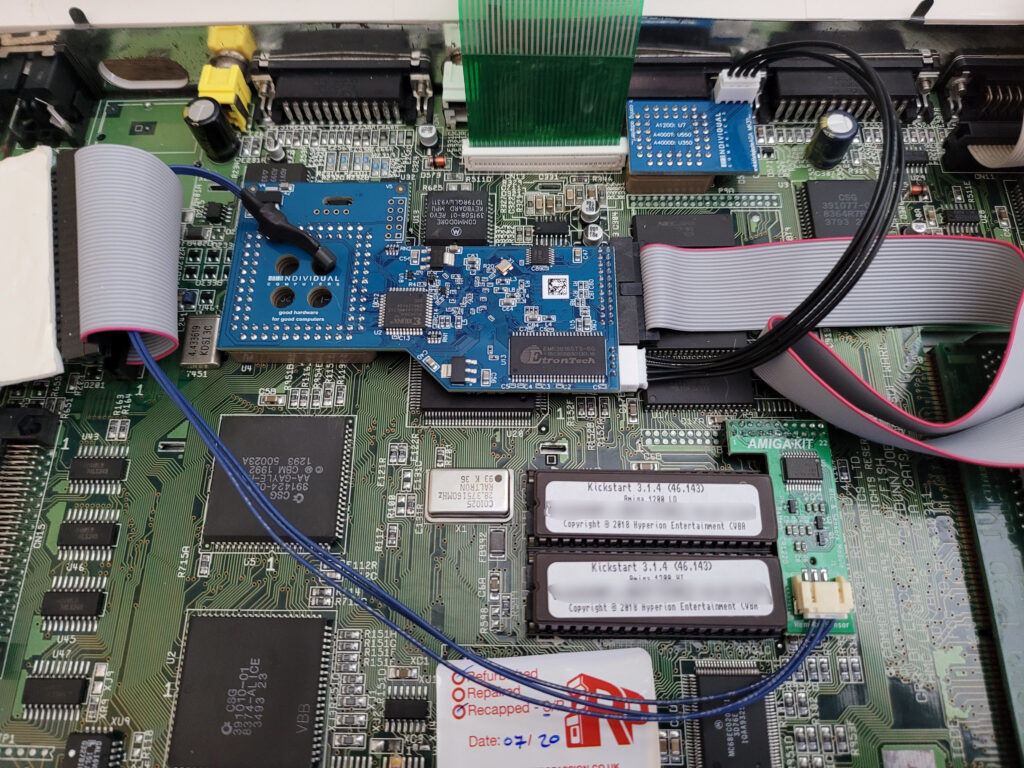 AmigaKit Real Time Clock and Sensors Module with the optional probe fitted to clock port and probe placed over the Lisa chip/Indivision.

The sensor module attaches to the clock port next to the Kickstart ROMs’ and the probe can be placed anywhere inside the case. As I was interested in the temperature of the Lisa chip and the Indivision I placed the end of the probe there.

Now having the hardware is all well and good, but how do you actually get the readings from it? Well AmigaKit supply a custom program for the Amiga that you install to take care of this. It actually comes as two separate programs, the first of which is called ‘AK_Sensors and is installed into the WBStartup folder. This program runs as a commodity and polls the sensors every 30 seconds and stores the values as environment variables in ENV. The polling interval is infinitely adjustable from between 1 second and 24 hours by means of a tooltype setting.

The second program, AK_Sensors_Display is what actually displays the readings on the Amiga’s workbench. This can be installed anywhere you like but if you want it to be displayed all the time then place it in WBStartup.

With the hardware and software installed it was time to get some readings. To do this I left my A1200 running for a couple of hours and then checked the readings. 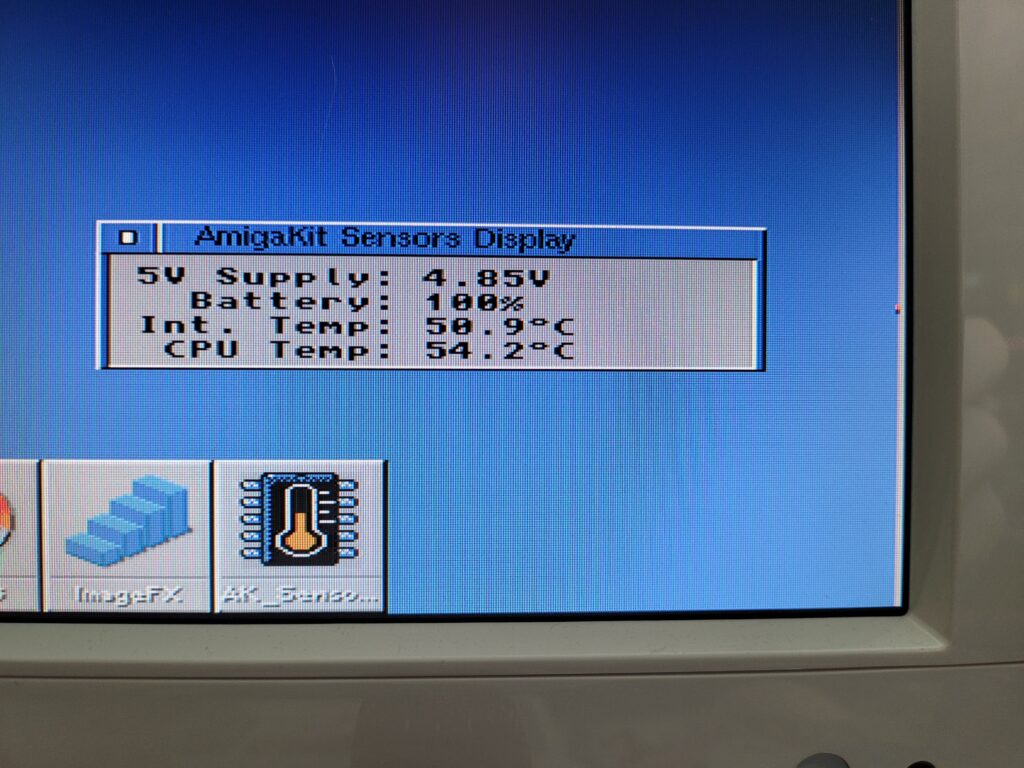 After 2 hours the internal temperature of my A1200’s case measured 50.9C whilst the probe placed on the Indivision/Lisa chip was reading 54.2C.

Now I had accurate and easily accessible readings it was time to do something to improve them!

After doing some research into quiet fans I settled on this one: a ‘Noctua NF-A4x10 FLX, Premium Quiet Fan, 3-Pin (40x10mm). 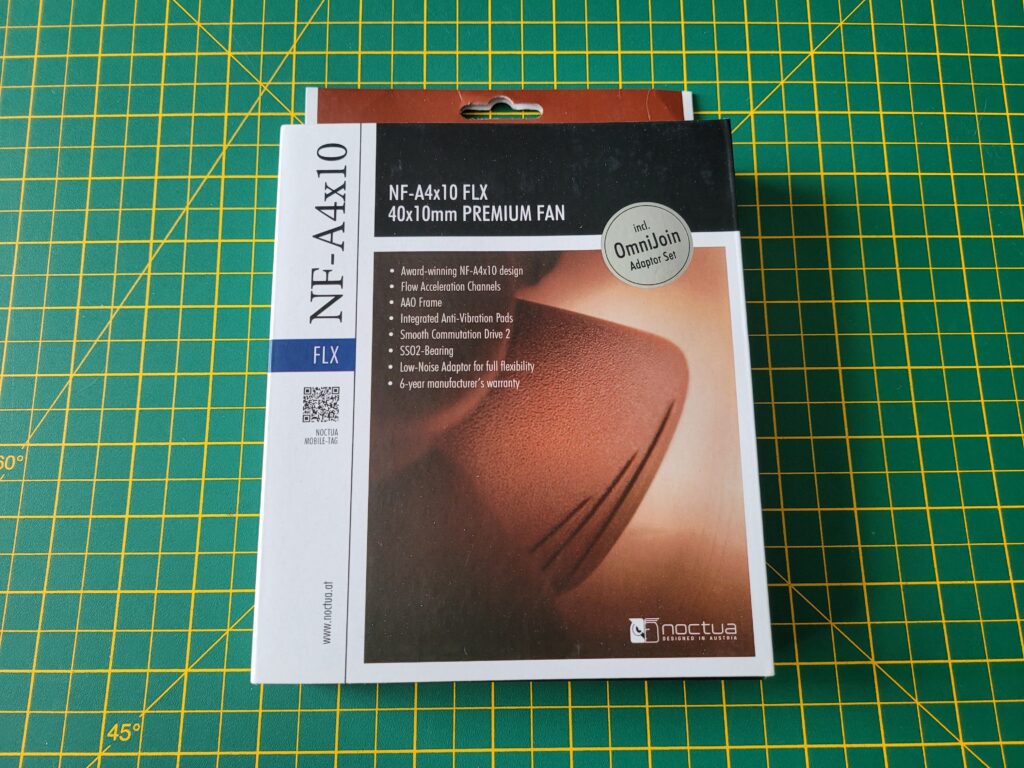 It got many glowing reviews online and I was especially encouraged by seeing comments like ‘whisper quiet’ and ‘near silent’. 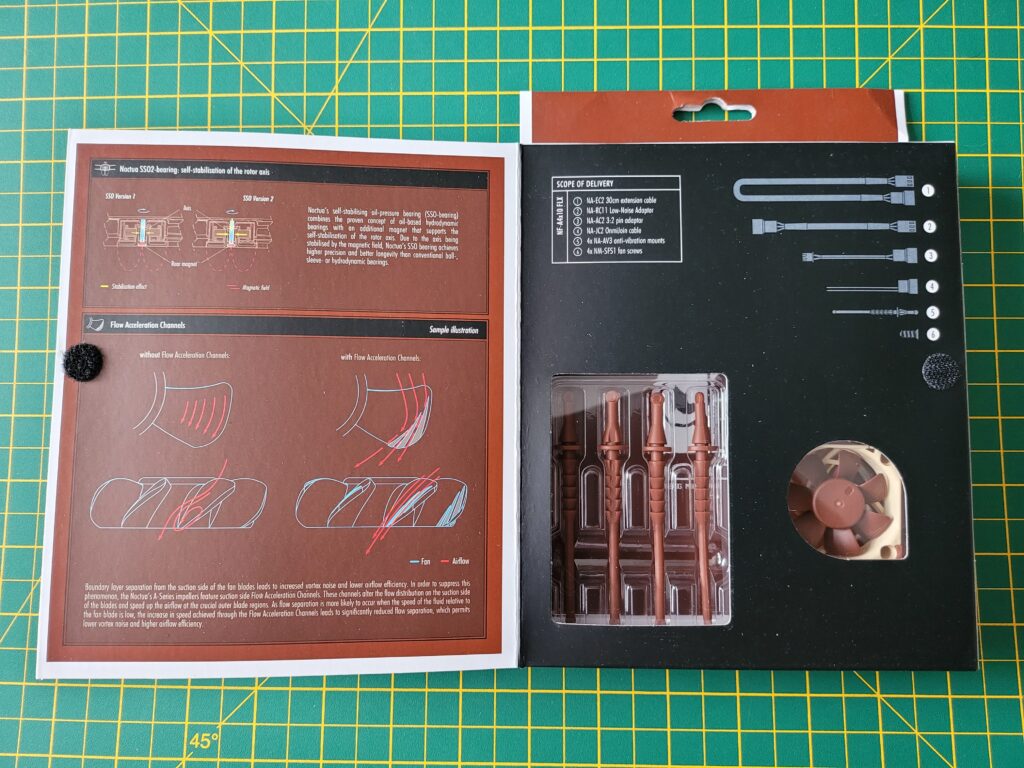 I’ve never seen such elaborate packaging for a simple fan before!

As small cooling fans go this was probably quite expensive but my Amiga is definitely worth it so I ordered one from Amazon. I was very impressed when I received it as it’s in a really cool presentation box complete with a plethora of cables and accessory doodads. 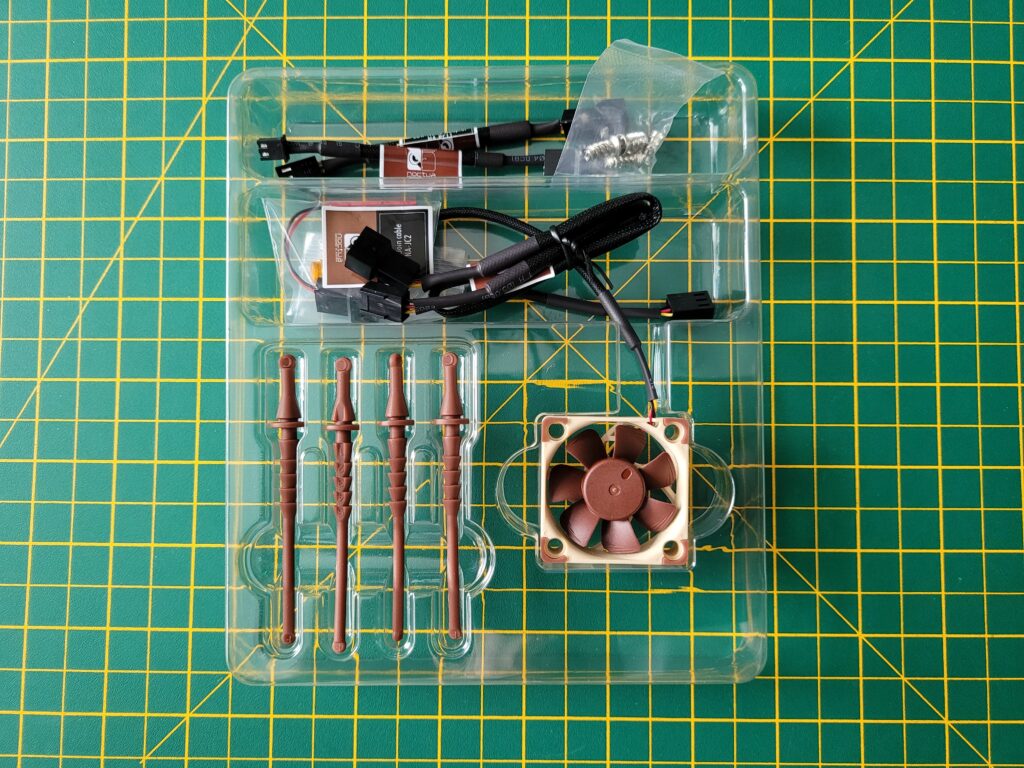 Plenty of extras come supplied in the box.

As the fan is 12V I intended to power it from the Amiga’s 12V floppy drive supply so I also ordered a floppy drive Y-splitter power cable from AmigaKit to take care of this. 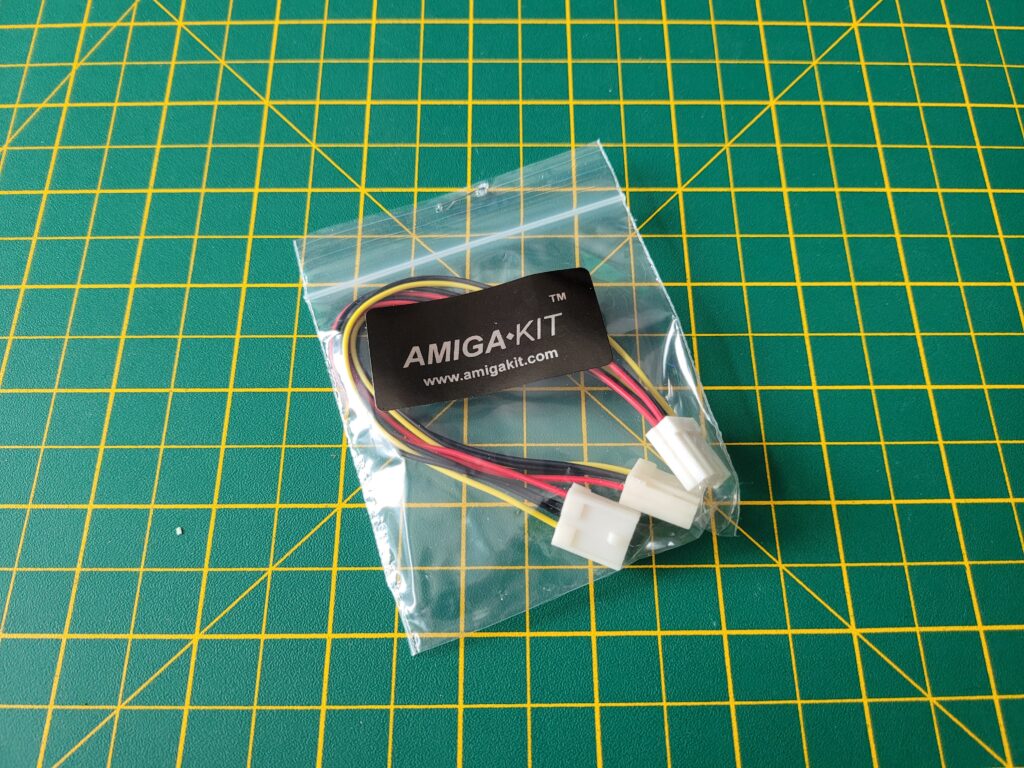 This will allow me to tap into the 12V supply neatly and safely and as it replaces the original floppy cable rather than modifying it, is completely reversible too. 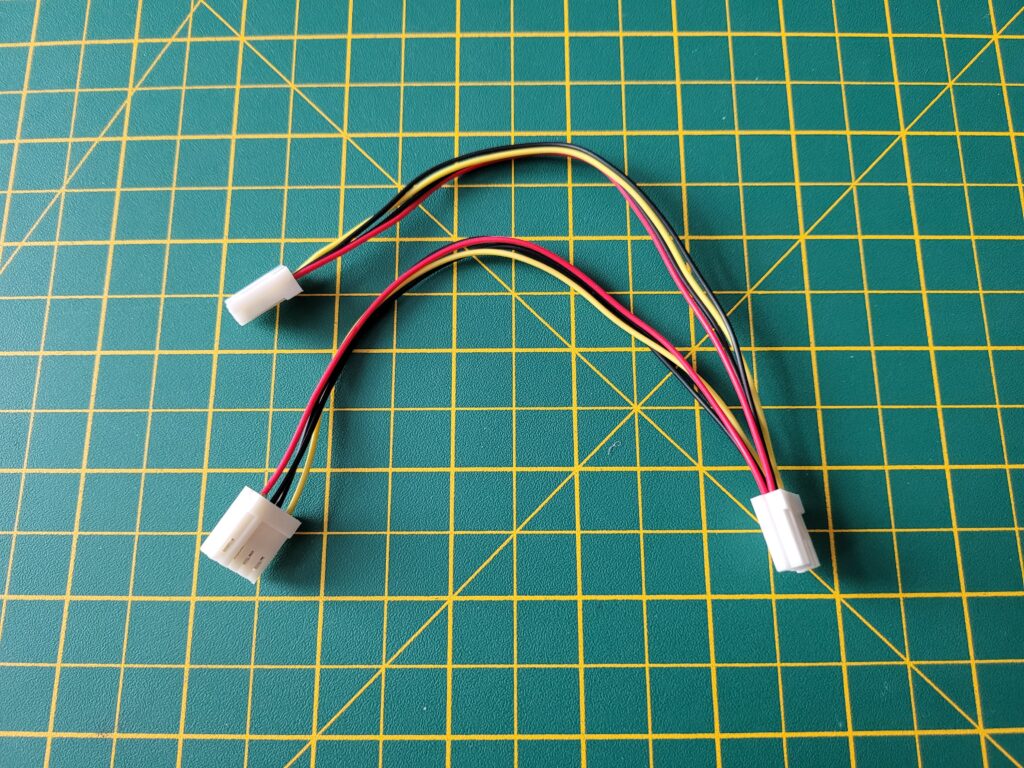 The fan came with a whole host of different mounting options but I chose to use the silicone anti-vibration mounts. I fitted them through the 4 mounting holes in the fan and then cut the excess lengths off flush with the fan. 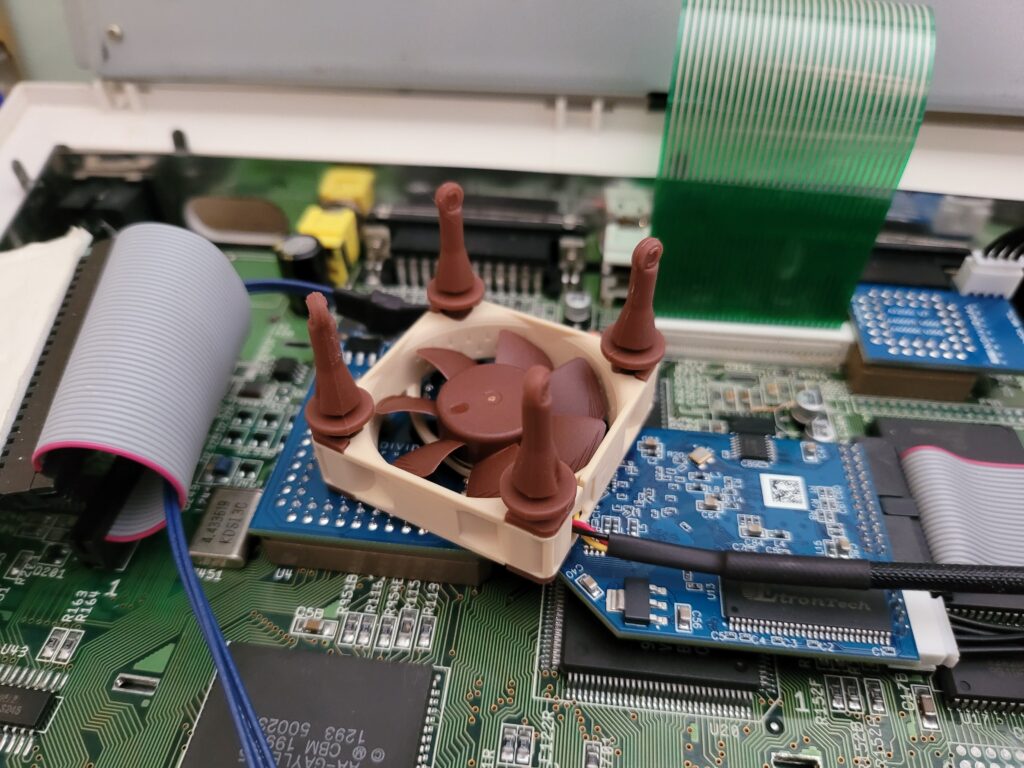 These mounts appeared to be sized perfectly to mount the fan above the Indivision board and by positioning them around it would also keep the fan anchored in place. 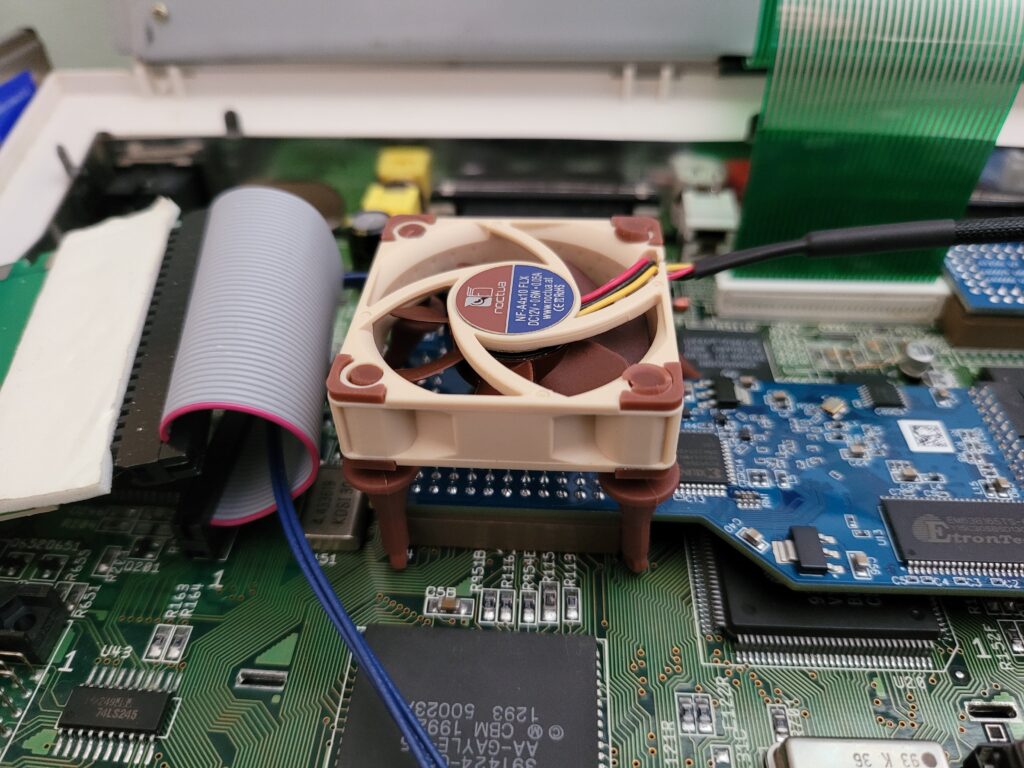 Fan fitted neatly over the Indivision. The back 2 legs are splayed slightly which actually helps to keep it held in place.

With the method of fitting the fan sorted I then turned my attention to wiring it up. I snipped off the power connector on one side of the Y splitter cable so I was left with 4 wire strands. Then I snipped off one of the black (ground) wires and the red (5V) wire from the same side. This left me with the Yellow (12V) and remaining black (ground) to power the fan. I then replaced the floppy power cable with the modified Y splitter version. 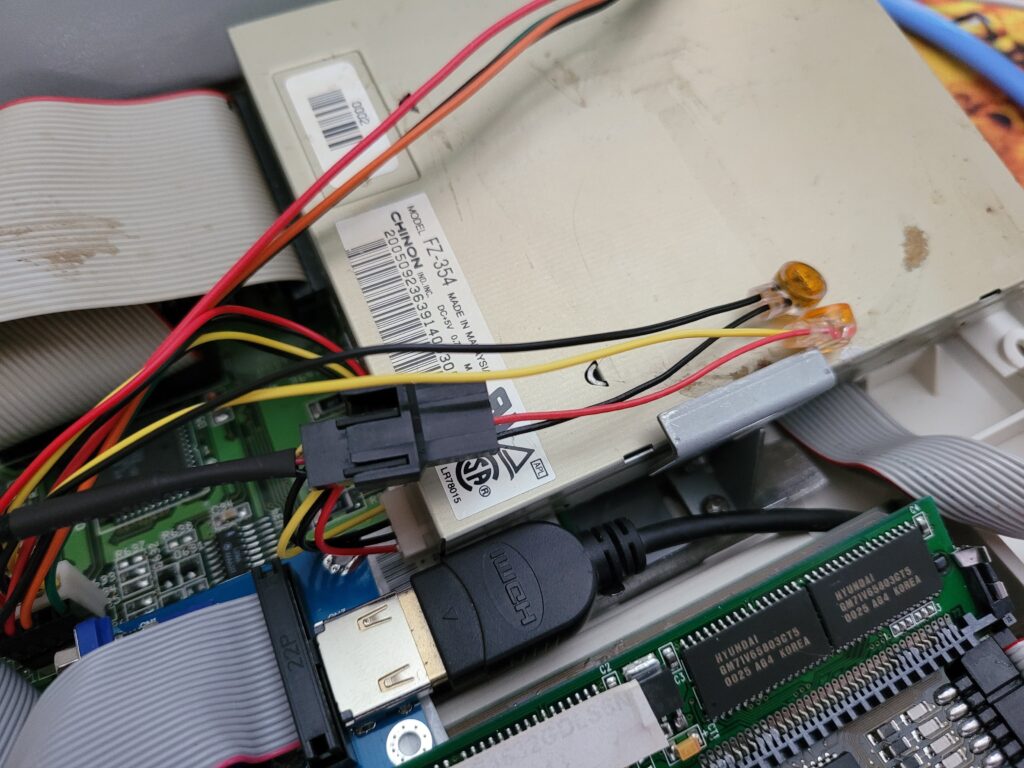 Tapped into the 12V and Ground wires using skotchlock connectors.

Next I used the ‘OmniJoin’ cable (supplied) together with a couple of Skotchlock connectors (also supplied) to attach the fan to the two wires from the floppy drive Y connector. 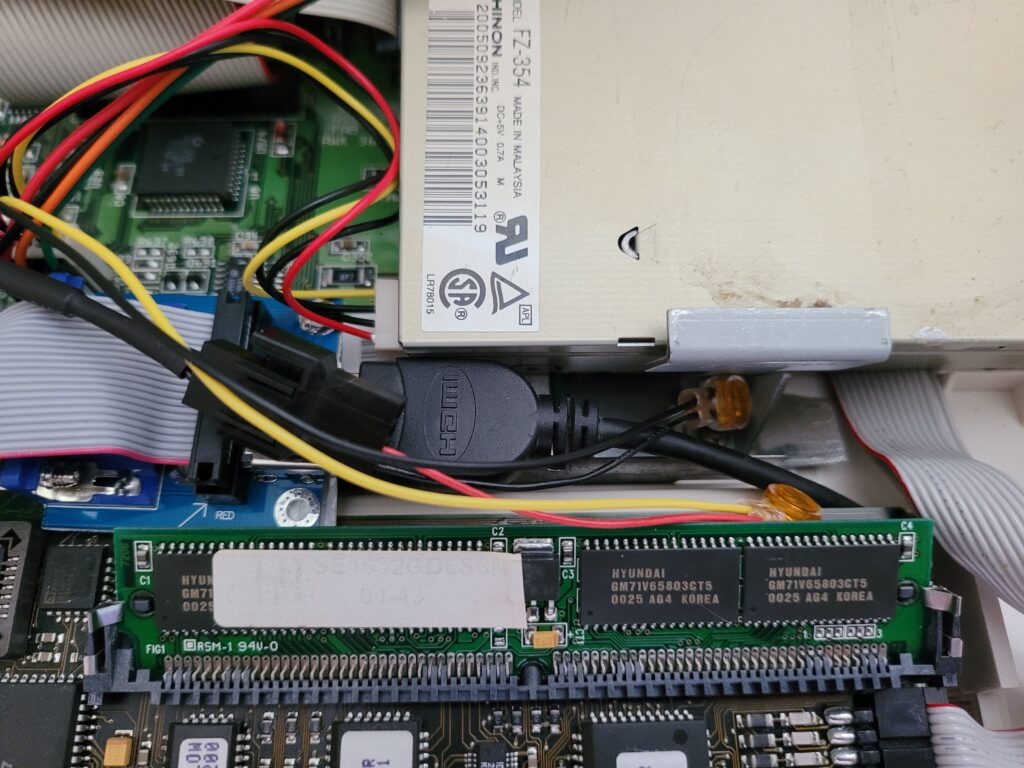 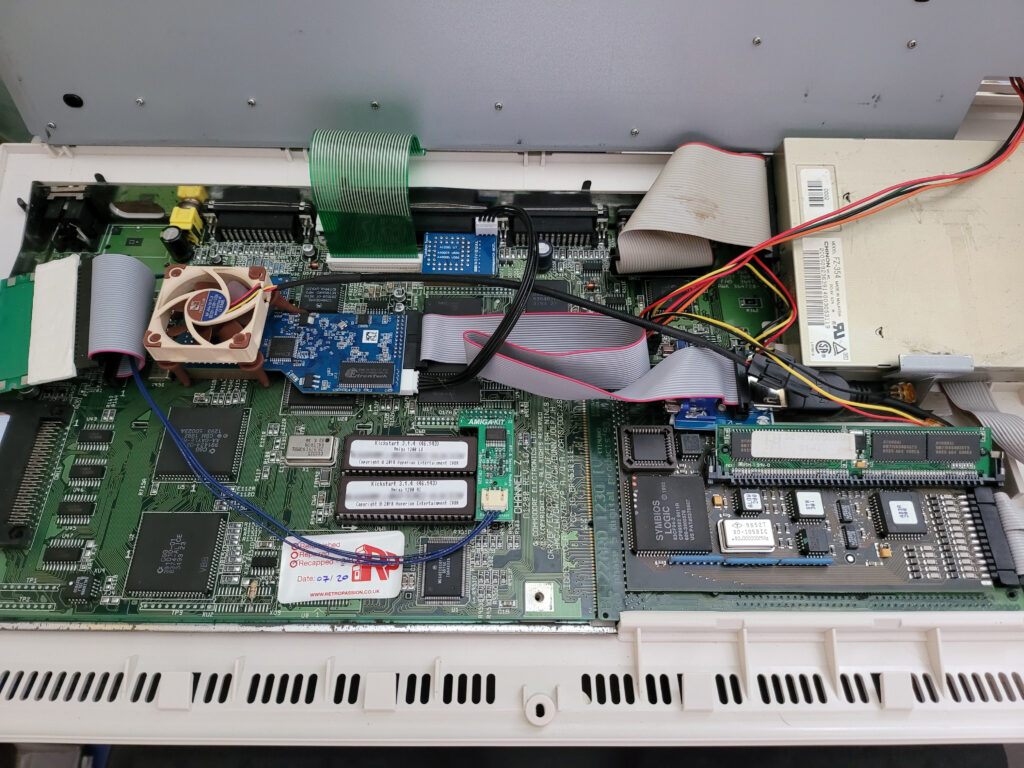 Everything fitted ready to put it all back together.

I also made sure that the red/black wires of the OmniJoin cable correctly lined up with that of the fan when it was plugged in. You can just make out the colours of the fan wires going into the fan plug in the image below.

Making sure that the red and black wires match up on the two connectors.

With everything in place I gave it a quick power-on to ensure the fan was working. It whirred into life immediately so I re-fitted the keyboard to check the clearance and was happy to find there was just enough to not cause any issues. If there had been I could have just trimmed a little off the mounts to shorten them. 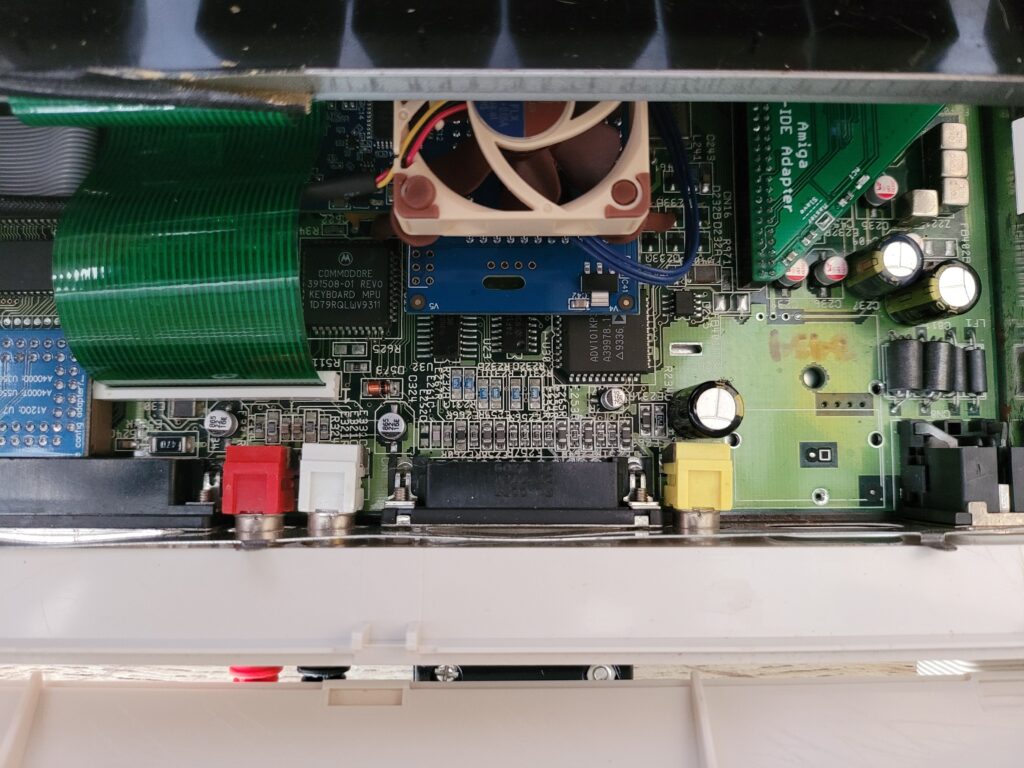 Just enough clearance between the keyboard and the top of the fan.

Finally I replaced the lid and carefully inserted the screws from underneath. If I flipped it over like I normally would then the fan would become dislodged as it’s not actually fastened down.

Will you Start the Fans Please

With everything back together and the cooling fan installed in my Amiga I powered it back on to assess the fan noise. I was pleasantly surprised to discover that it was very quiet indeed, just as advertised. It’s not silent and I can hear it but it’s just a soft whirring sound and not at all distracting even in a quiet room.

Of course being quiet is one thing but was it actually going to cool my Amiga down? I left my A1200 powered on for a few hours just like I’d done previously without a fan installed to find out. Two hours later I checked the readings and you can see them in the image below. 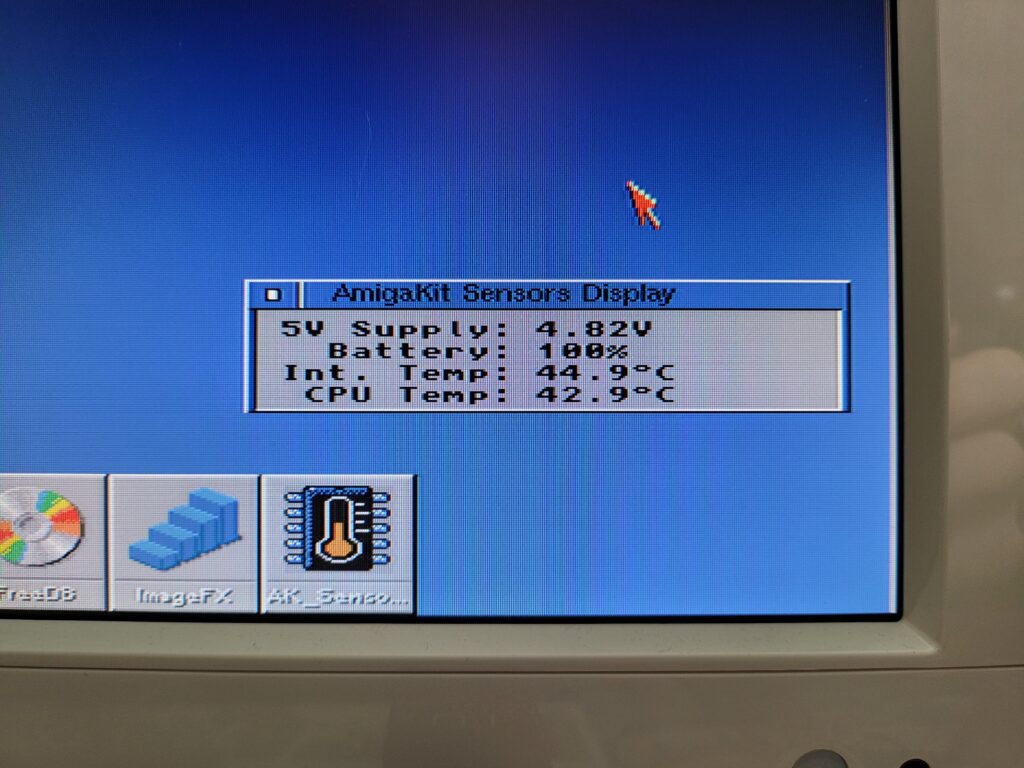 As a reminder, without the fan, after two hours the internal Case temperature was reading 50.9C and the Indivision was at 54.2C.

With the fan installed and after running for the same length of time the internal case temperature was now 6C cooler at 44.9C whilst the Indivision had dropped an impressive 11.3C to 42.9C.  The case also felt noticeably cooler with no prominent ‘hotspots’ like before.

Needless to say I am delighted with this modification. The whole thing was non-destructive and completely reversible and it only cost around £20 all-in. As the 12V floppy power feed is for the drive motor it’s an ideal power source as most of the time it’s idle anyway. Even so I’ve used floppies pretty extensively since fitting the fan and have had no issues at all even then. Of course your mileage may vary and if you have a borderline PSU then this might just tip the balance.

Throughout this whole project one thing had been bugging me – the Compact Flash IDE adaptor and its ‘flappy’ ribbon cable. When it wasn’t getting in the way of the fan it was stopping the top of the case from fitting back on properly. It had to go! 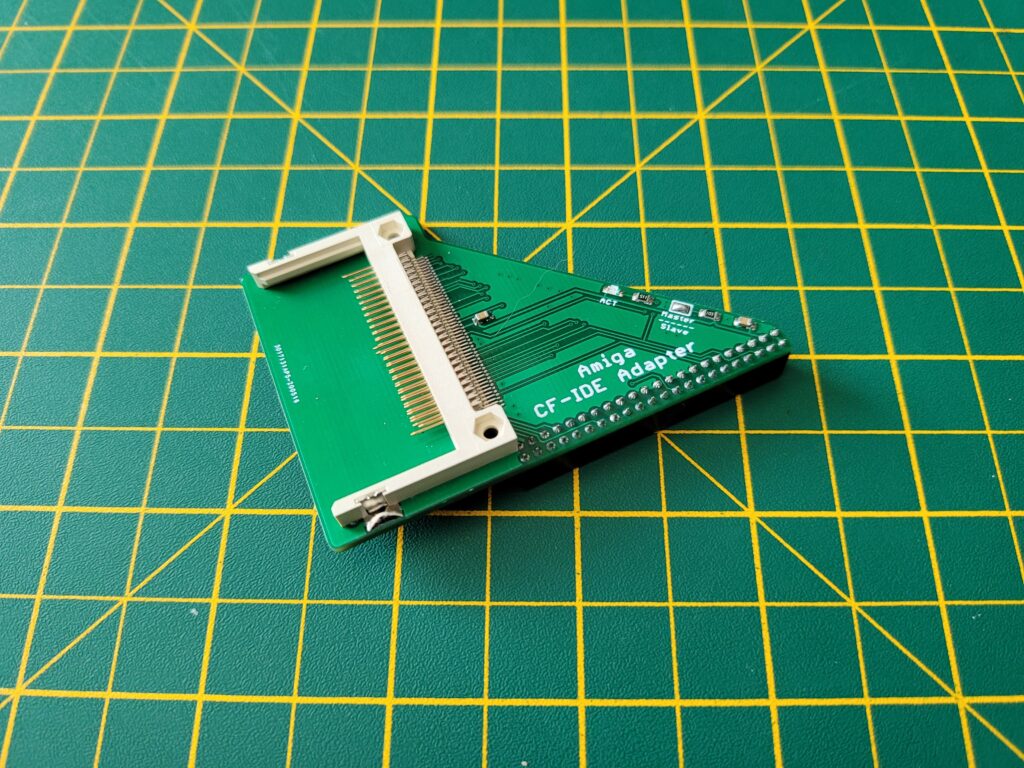 I had a look around and discovered a nifty looking right-angled 90 degree CF-IDE adapter on eBay so I bought one immediately. 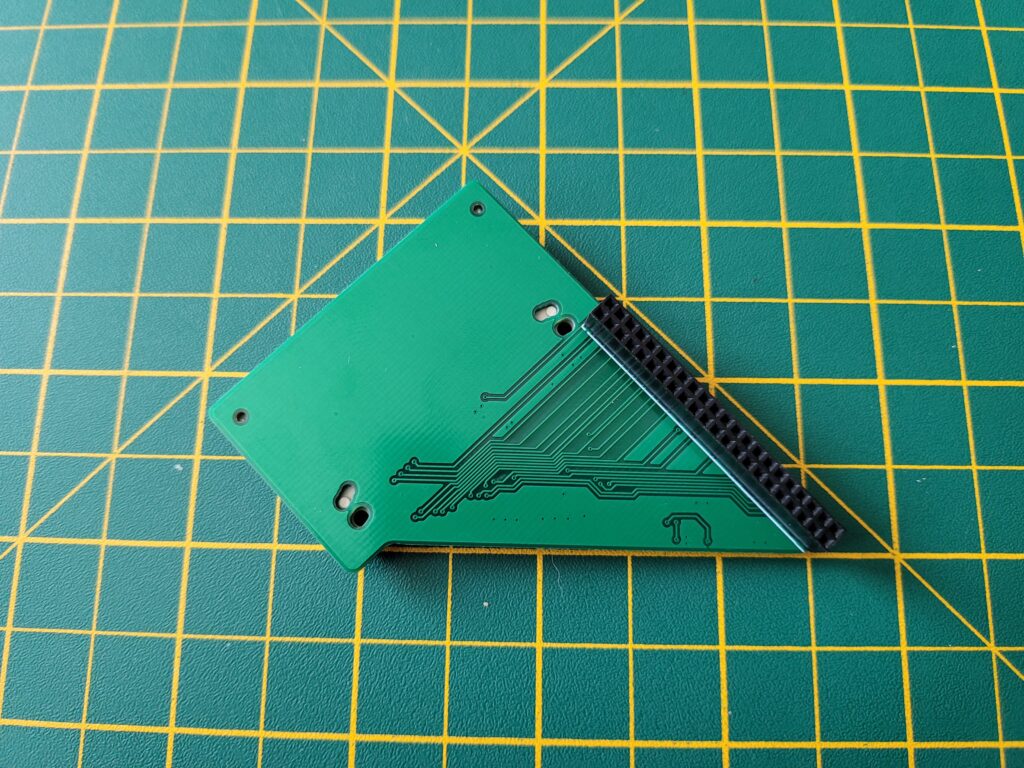 Fitting it was a breeze and the card now sits neatly just above the PCMCIA socket and everything looks neat and tidy once more, just how I like it. 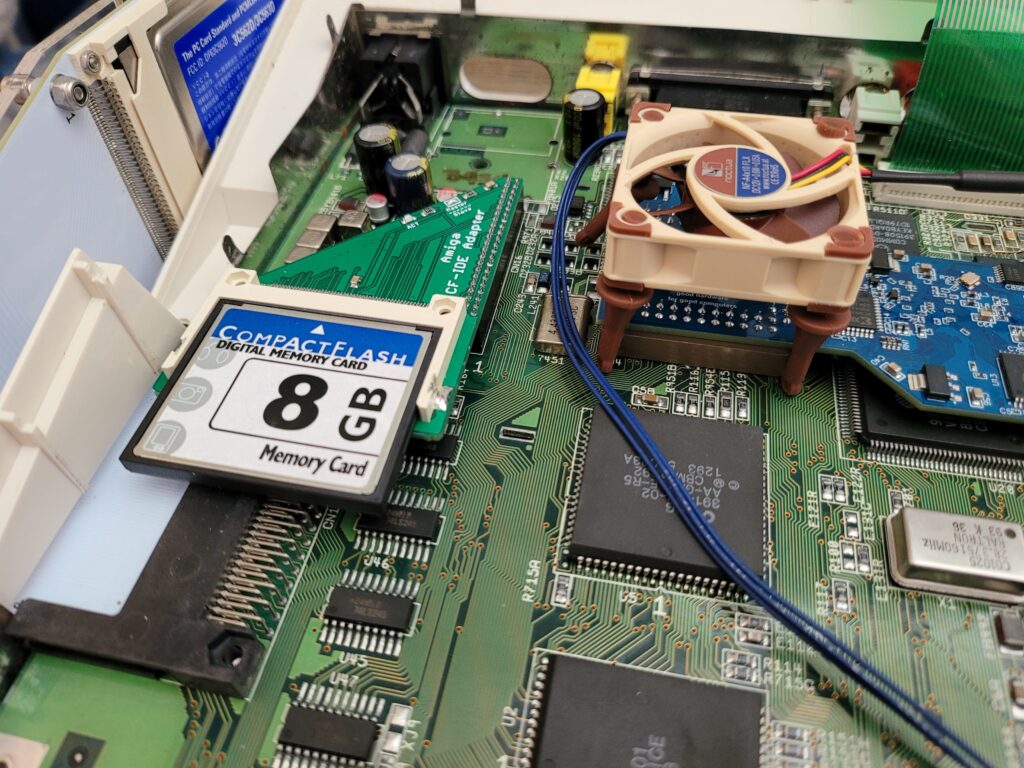