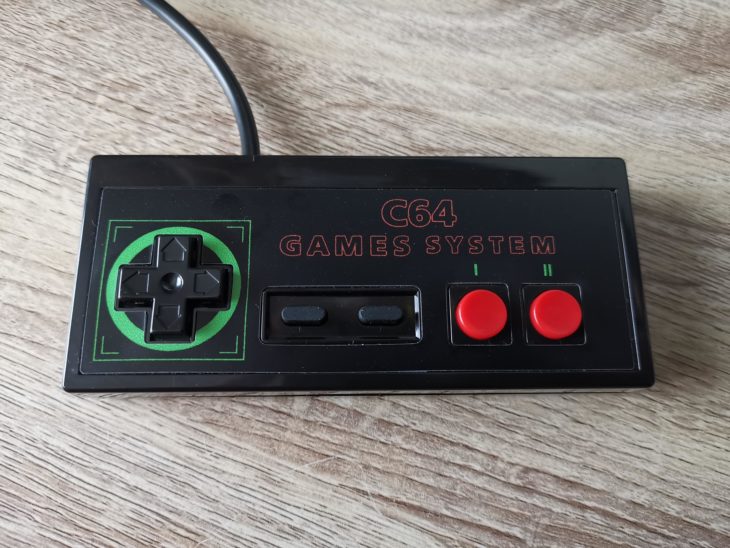 Back in the twilight period of the C64’s life, Commodore released the C64 Games System or C64GS. It was a keyboard-less console that used cartridge based games just like the Sega Master System or NES. Unfortunately there were only ever a few dozen games released for it and it was a commercial flop.

Why am I mentioning this now? Well, although it didn’t come with a gamepad, it did come with a joystick (Cheetah Annihilator) that had a second, independent fire button. Prior to this all C64 joysticks just had a single fire button. Those joysticks that did have two physical buttons existed solely to allow left or right-handed play.

Unfortunately due to the short life-span of the Commodore 64GS only a small number of games were ever produced that supported this second fire button. 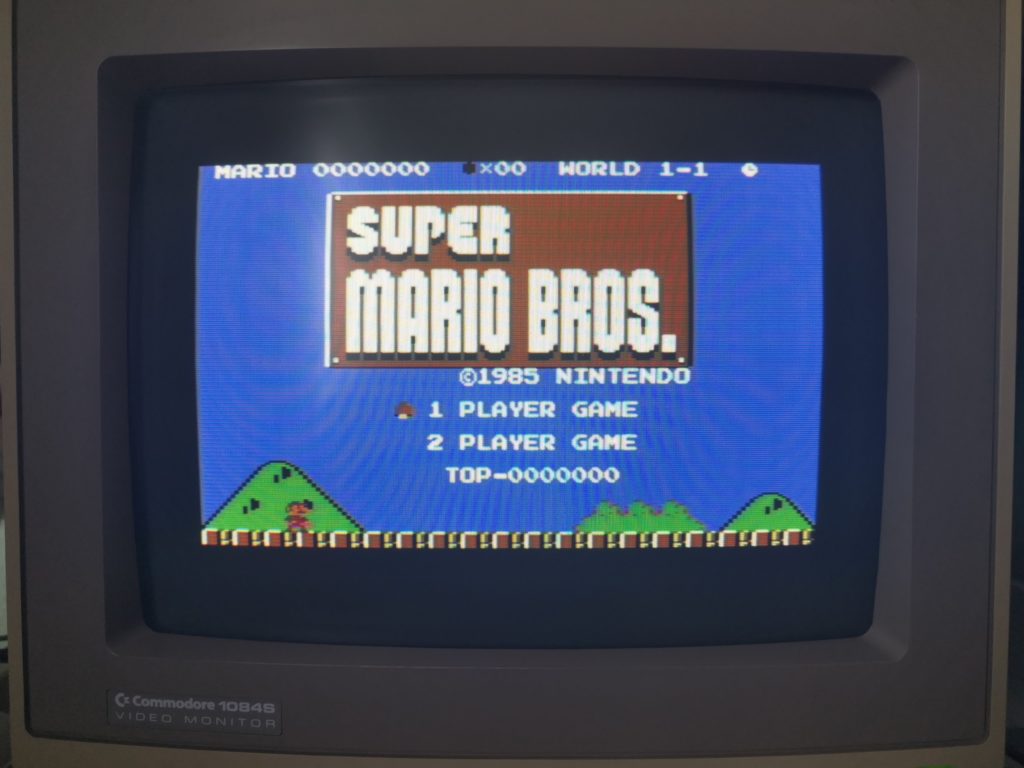 Super Mario Bros on the Commodore 64.

Fast forward to 2019 and the amazing Super Mario Bros for the C64 was released supporting 2 buttons. This kick-started my desire to find a decent 2 button joystick to control Mario. I mean who wants to have to push ‘up’ on a joystick to make Mario jump? 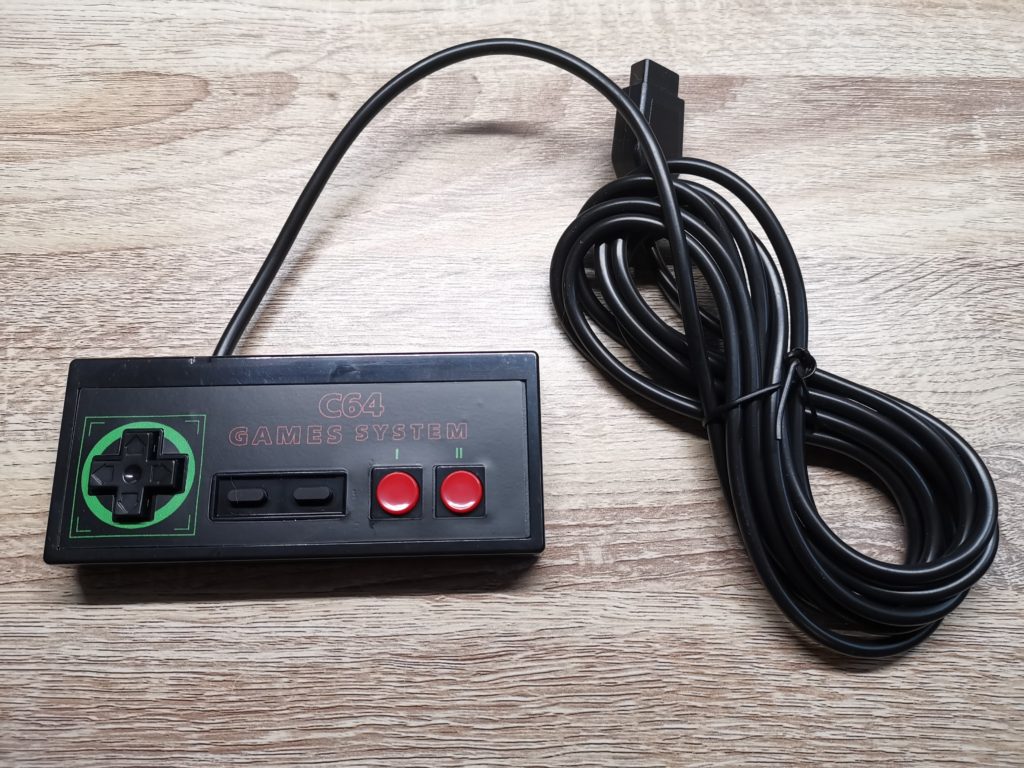 The gamepad comes with a nice long cable.

A few weeks ago I discovered someone who is actually making Commodore 64GS gamepads. The company, based in the USA can be found on Etsy and eBay and is called RetroGameBoyz. The gamepads it produces are custom made to order and they offer quite a few different options to choose from. 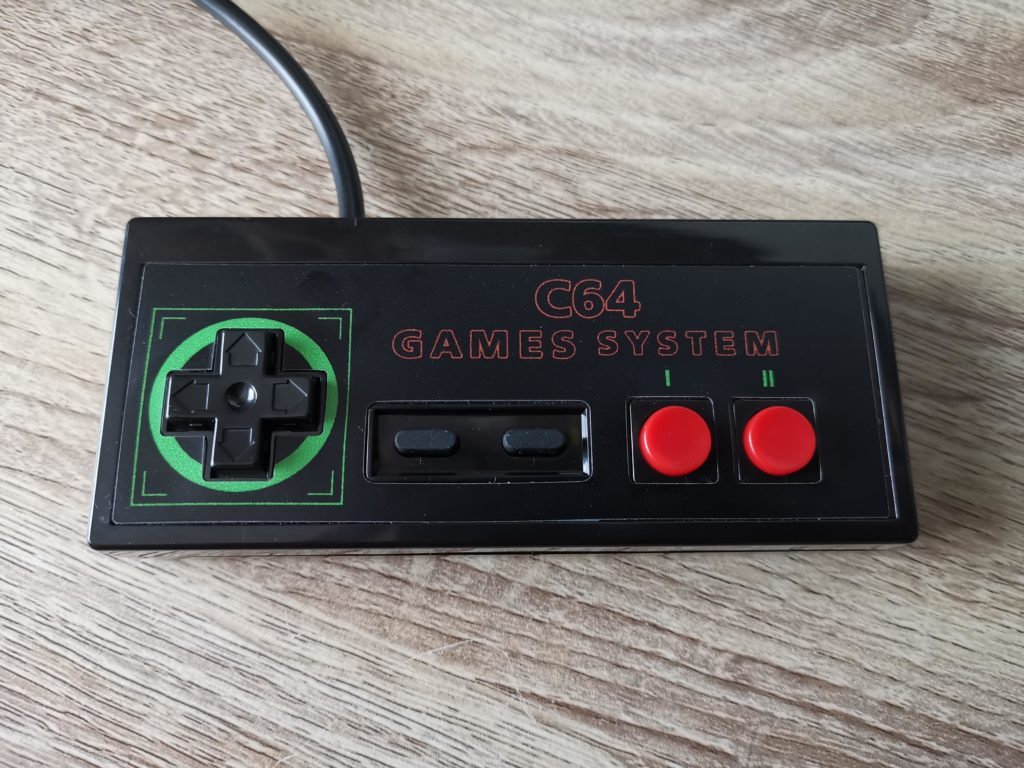 They sell the gamepad for around £25 with delivery to the UK taking around ten days. Unfortunately I did get stung for import taxes and the usual Royal Mail ‘money for nothing’ charge. Combine that with the postage fee and this basically doubled the cost of the pad for me. 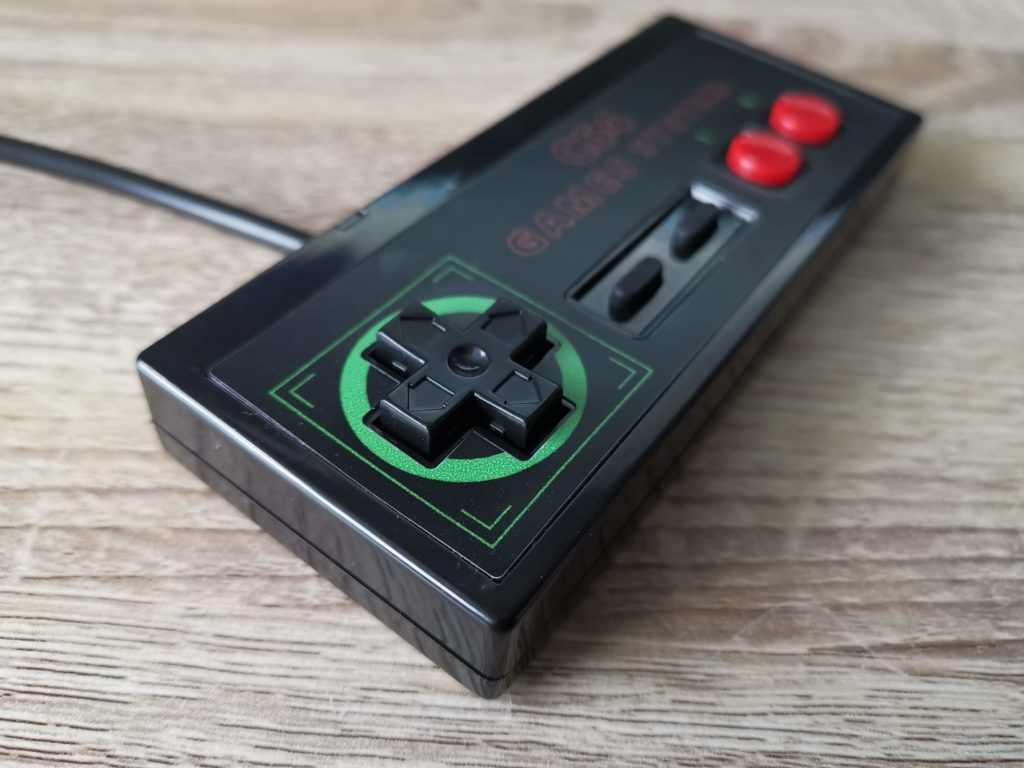 A close-up shot of the D-pad.

The gamepad is well constructed and nicely presented in a glossy black plastic shell. It is faced with a custom made vinyl ‘C64 Games System’ skin which really sets it off. This skin is how RetroGameBoyz differentiate each gamepad in their range. They do one for the Amiga and few more variations for the C64 too. In one configuration you can have the second fire button mapped to ‘up’ which would come in handy for a lot of platformers. 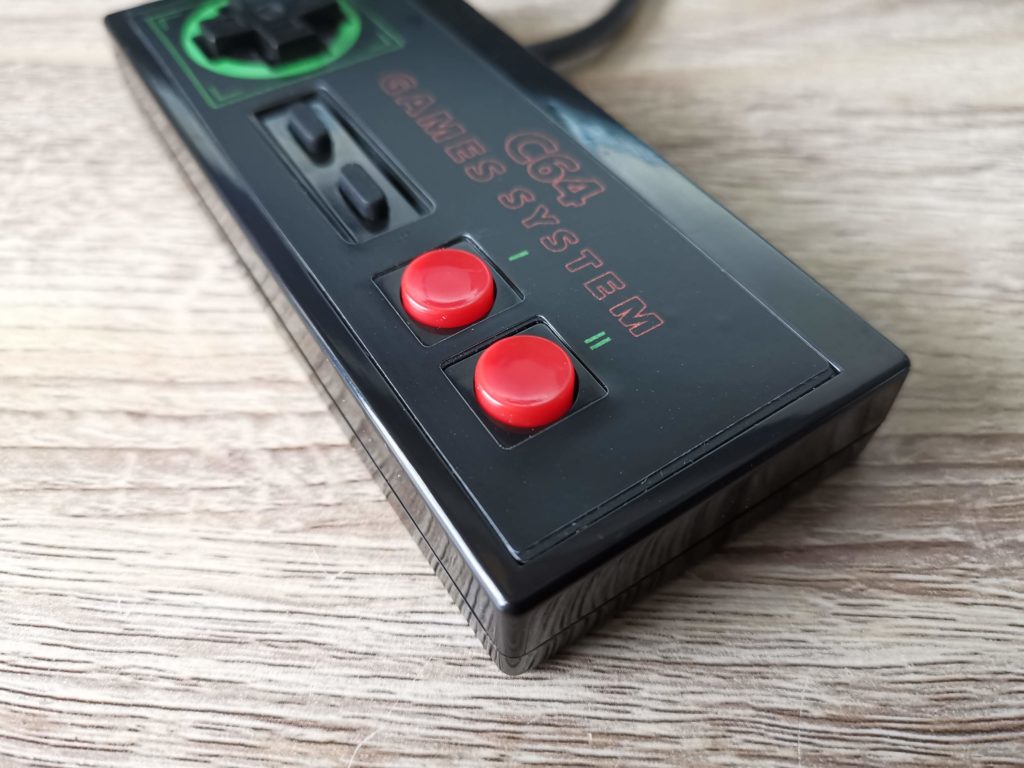 A close-up shot of the 2 fire buttons.

The gamepad came with a very generous 10 foot (3m) long cable and is fitted with a standard 9-pin D-sub plug. 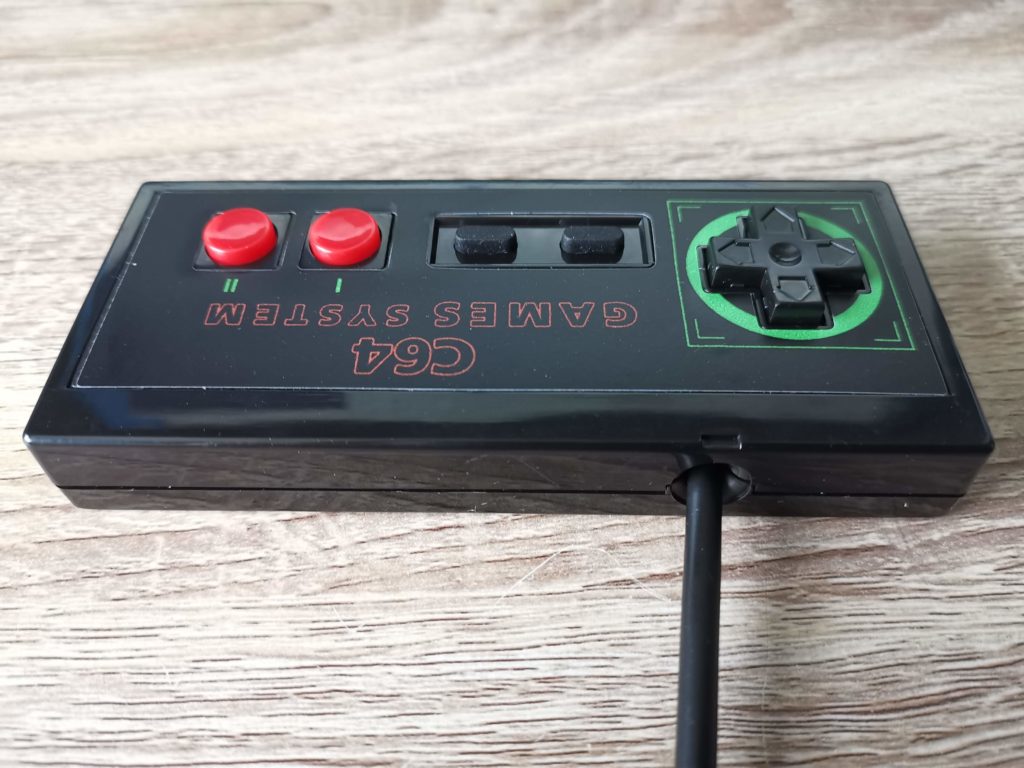 In use it works well with the D-Pad being easy to operate and the two fire buttons very responsive. The two central ‘select’ and ‘start’ buttons are actually extra ‘left’ and ‘right’ buttons. The main fire button is labelled ‘I’ and the extra button ‘II’. 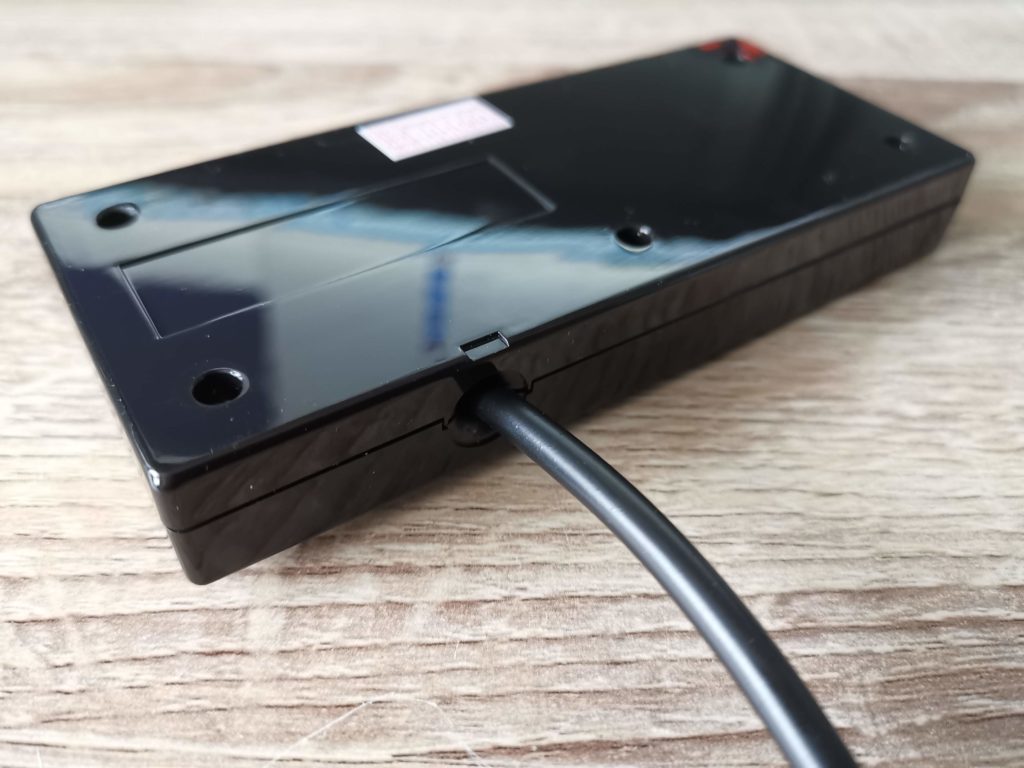 Bottom of the gamepad case.

I’m really happy I’ve found this controller. For games like Super Mario Bros it really transforms the gameplay experience. I know joysticks are great for a lot of games but I do prefer using a gamepad these days for platform games. 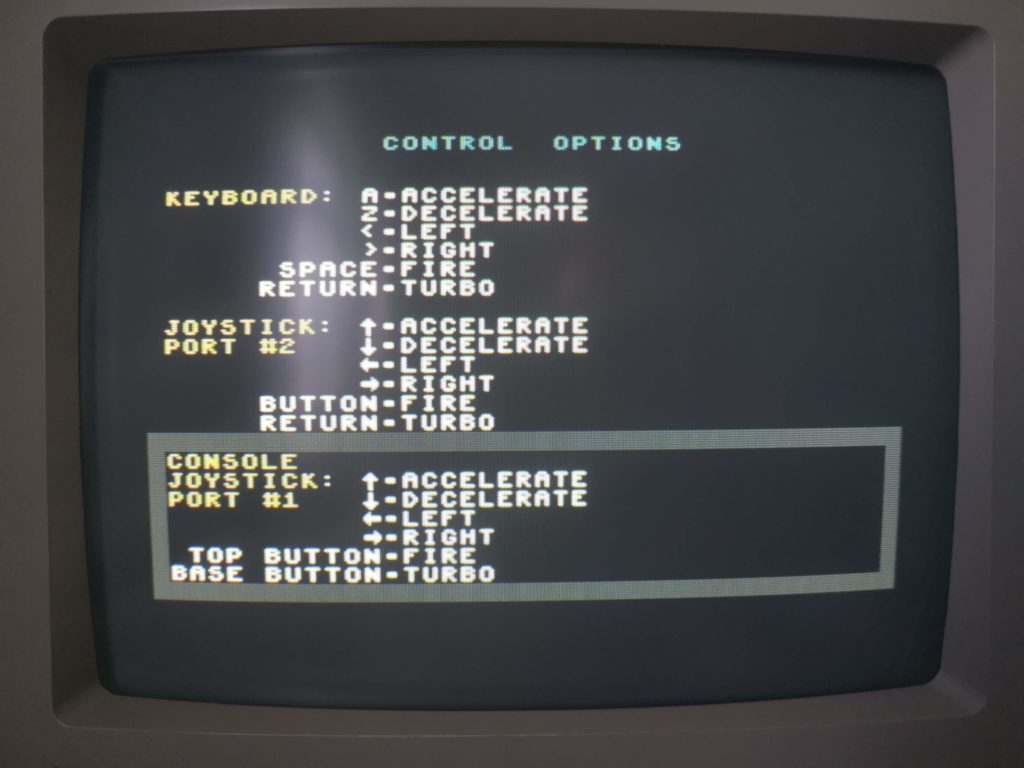 The addition of the second fire button is a real boon too. In supported games like Chase HQ 2 you can play them without having to keep reaching over to press a key on the keyboard. In other titles like Paradroid Redux it offers a more nuanced control system by separating off one of the extra controls from fire button A to button B.

Here’s a list of Commodore 64 games that support a 2nd fire buttons and its function, if I’ve played them. 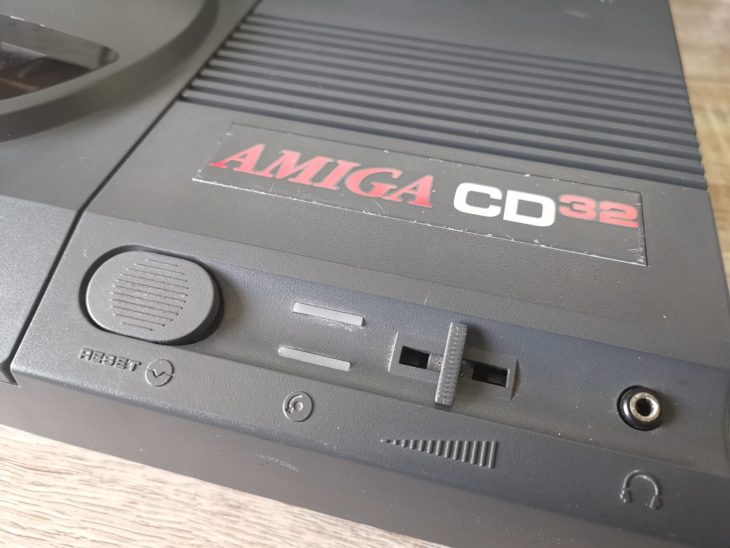 I never owned an Amiga CD32 Console back when they launched in 1993. I remember reading about them in Amiga Format and wanting one desperately but could never justify or afford one at the time. Not long after they launched Commodore went out of business and so the CD32 quickly disappeared from the shelves and from my mind.

Fast-forward some 25 years and I recently found myself pining after one of these mythical beasts again. Reading numerous articles about them in magazines and on the ‘net added further fuel to the fire. So I did the only sensible thing a middle-aged bloke could do and bought my very own Amiga CD32! Here she is in all her 32-bit glory! 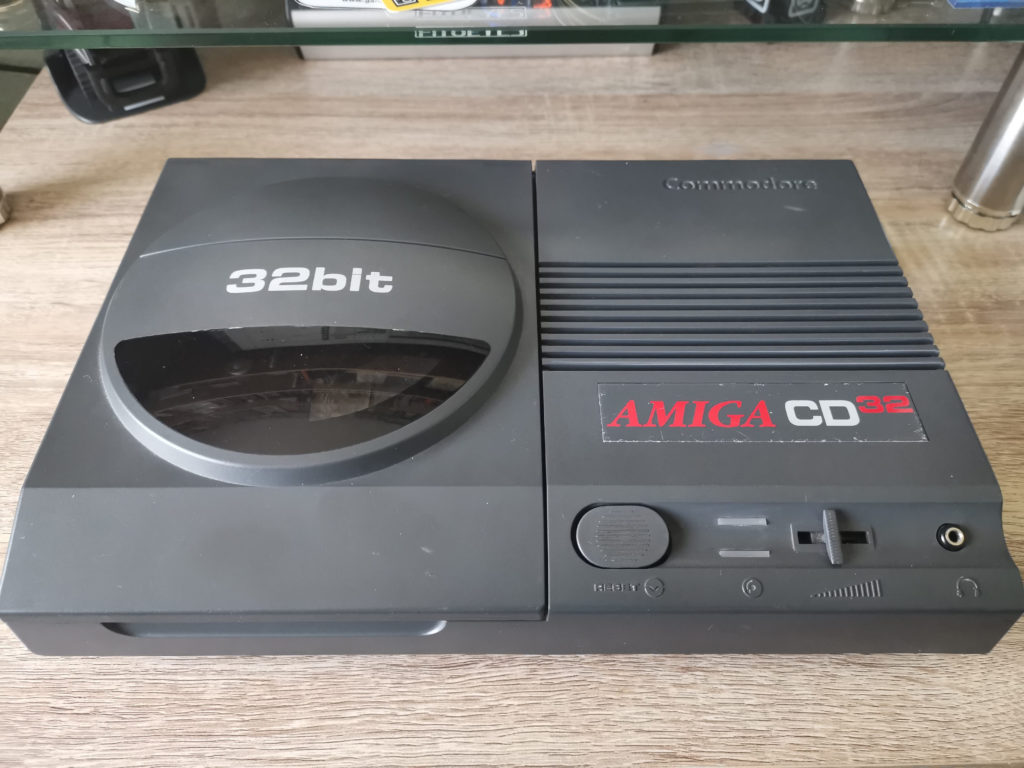 For it’s age and what I paid for it I think it’s in great condition. Sure there’s a couple of blemishes and the badge is scratched but for a 26 year old machine I’m more than happy with it. It’s already been fully re-capped so I don’t have to worry about that side of things either. 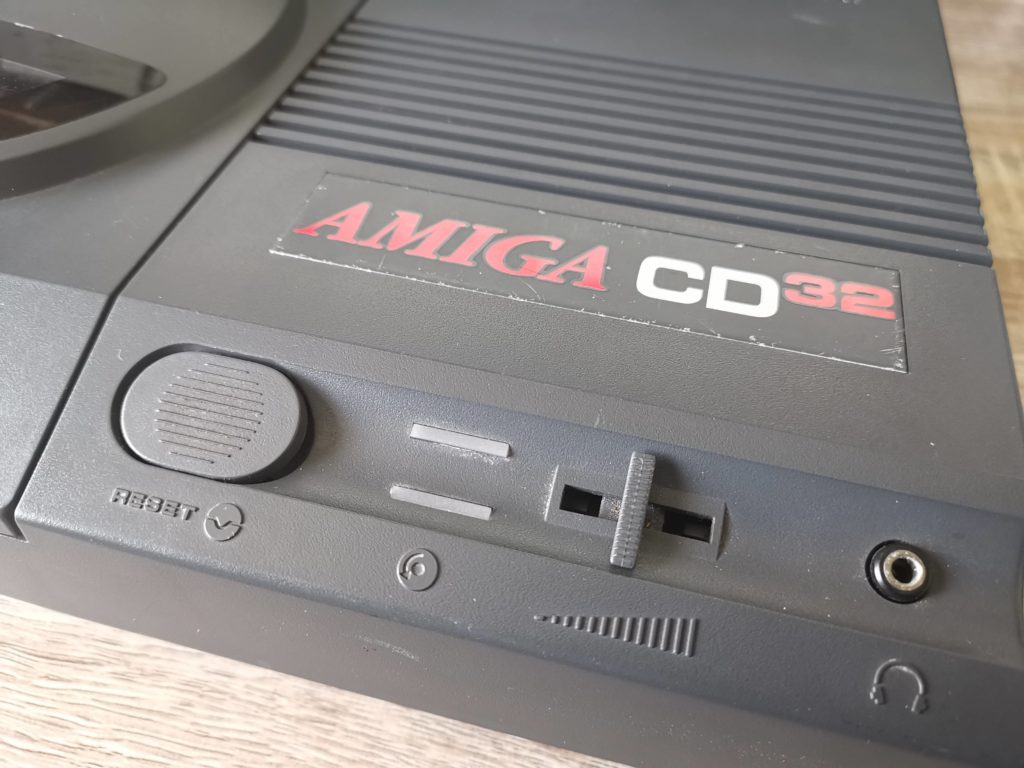 All the ports, buttons and outputs work as they should. However I can’t really see myself using it as a CD player much but at least the option is there should I want to! 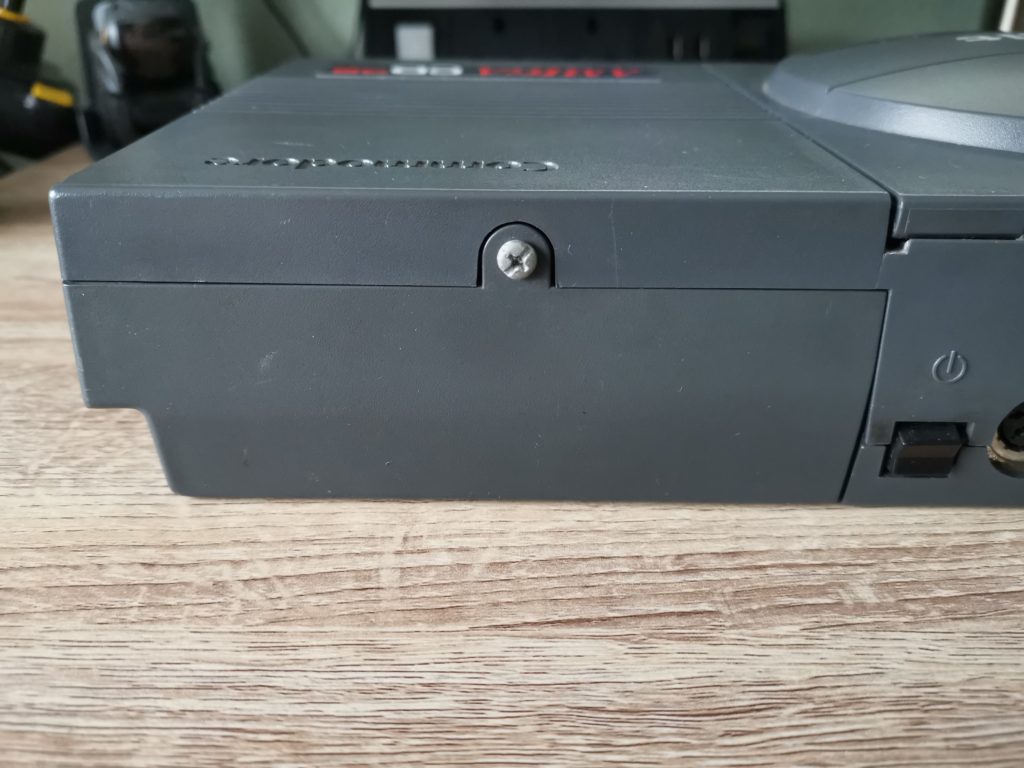 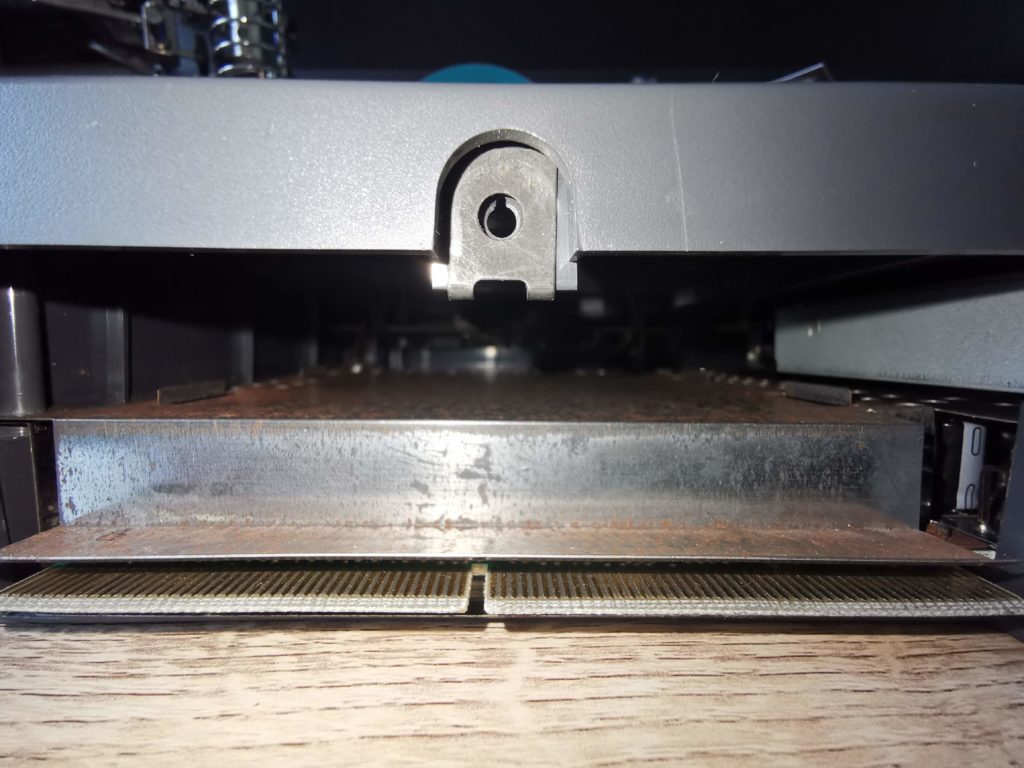 A look inside the CD32 expansion port

There’s an expansion port on the back which can be used to install all manner of wonderful contraptions. In the past there were FMV cartridges, floppy drives and the SX-1 which could convert the CD32 into a full blown computer. Nowadays you can hook up a TerribleFire expansion which offers extra RAM, faster CPU’s, IDE interface and more. I’ll definitely be looking to utilise this port soon! 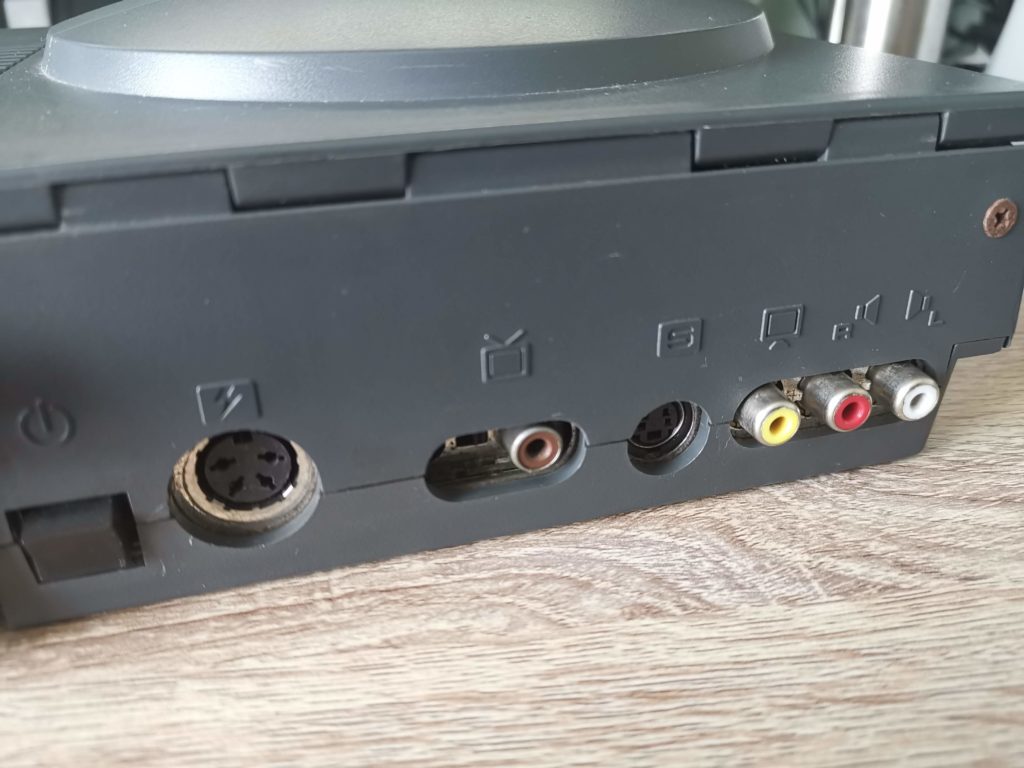 There’s plenty of connectivity round the back as standard. No less than 3 video output options, RF, composite and S-video. The latter provides by far the best picture if you have a TV capable of utilising it. 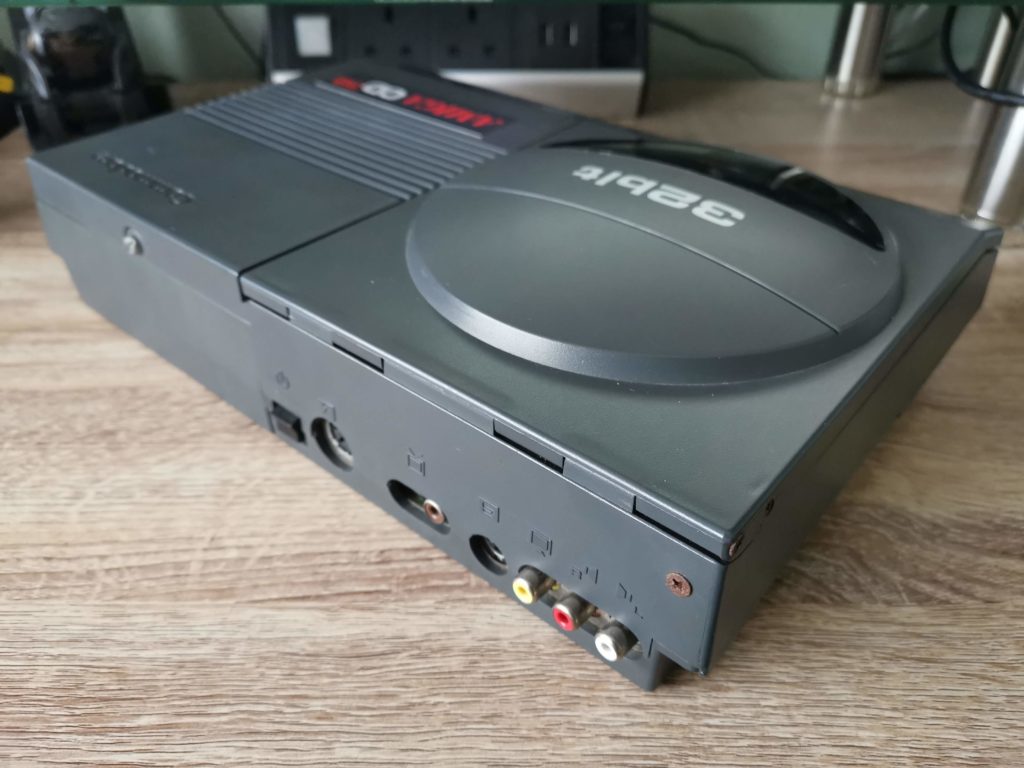 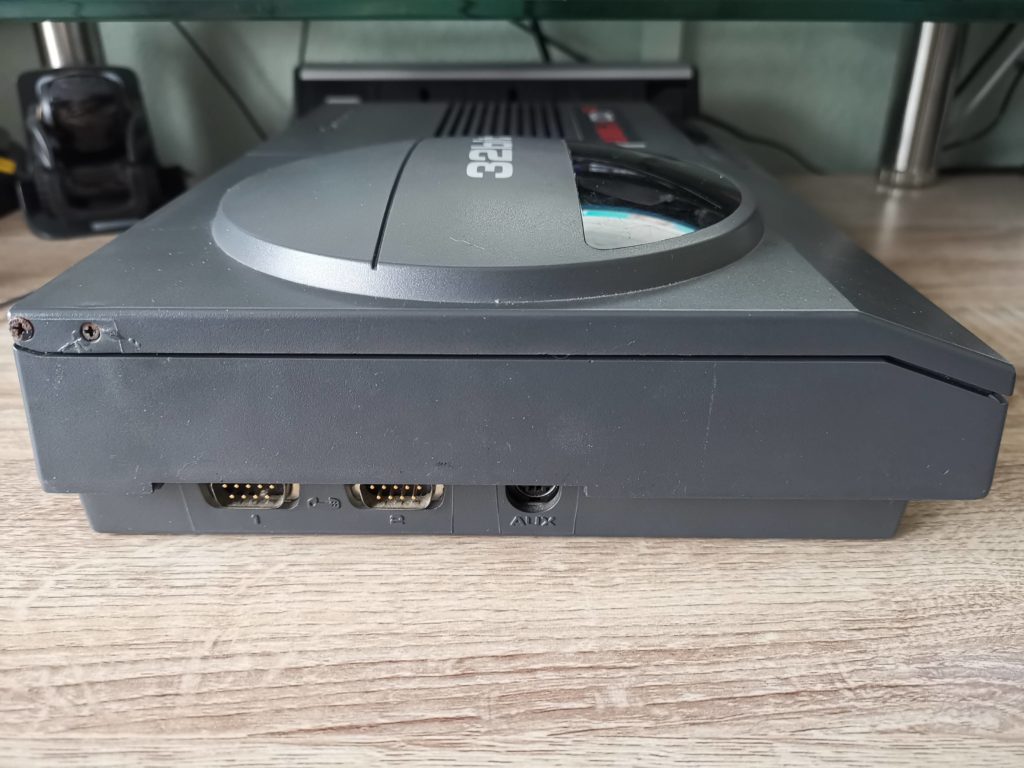 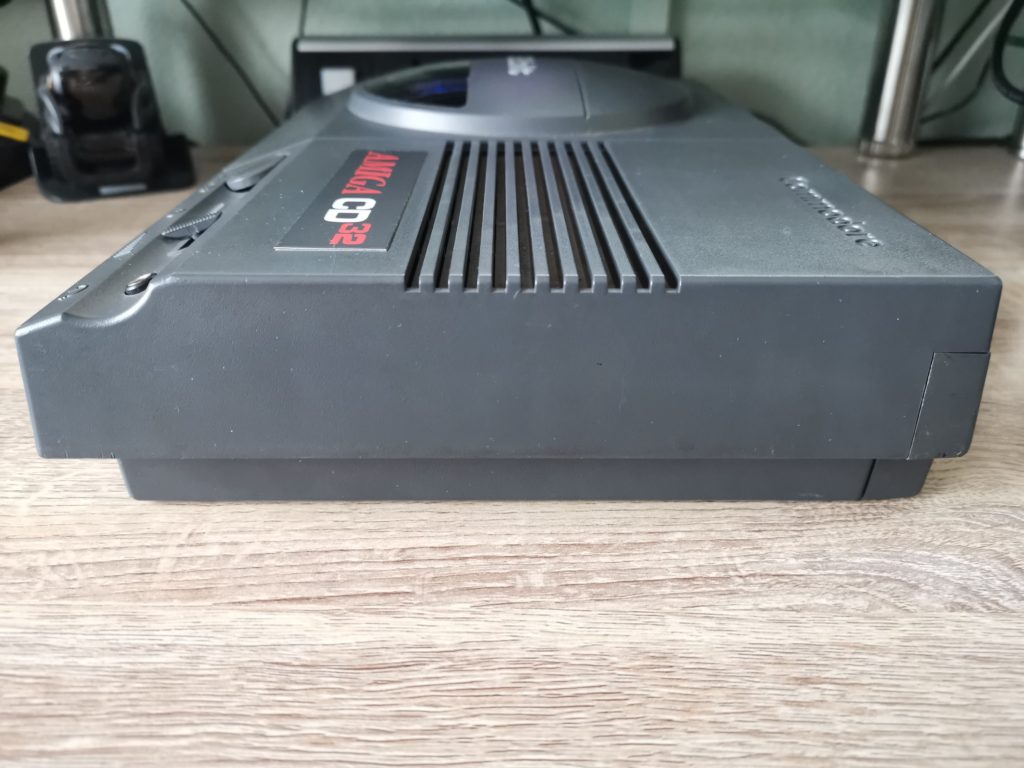 Amiga CD32 right side. Not much to see here really. 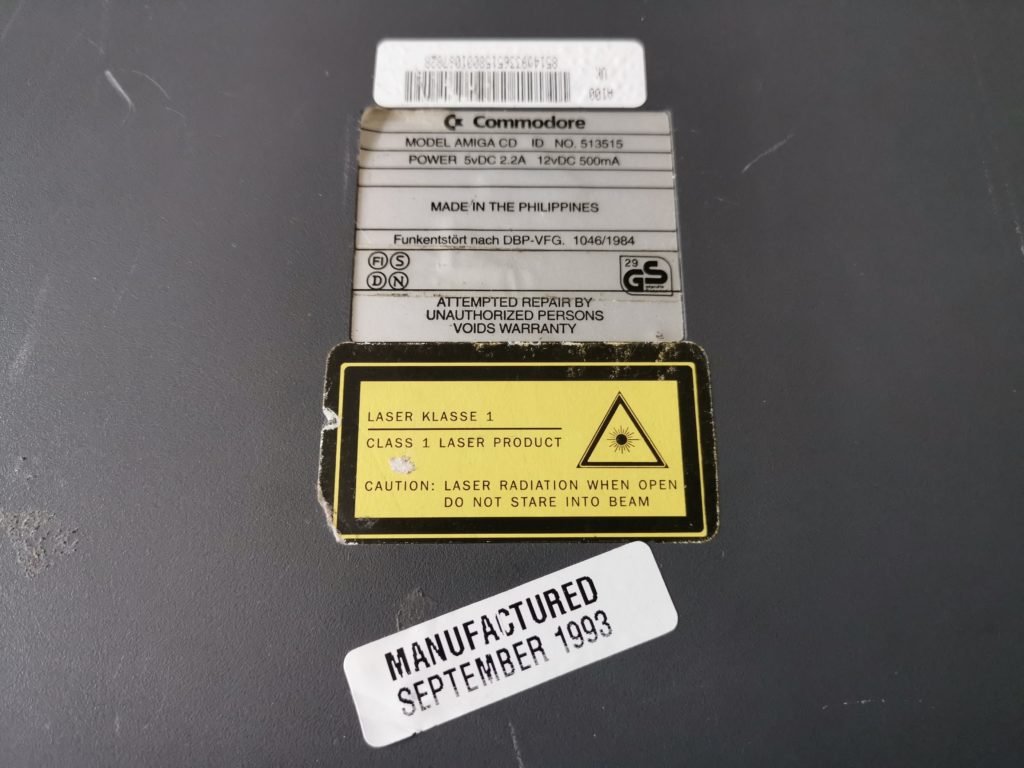 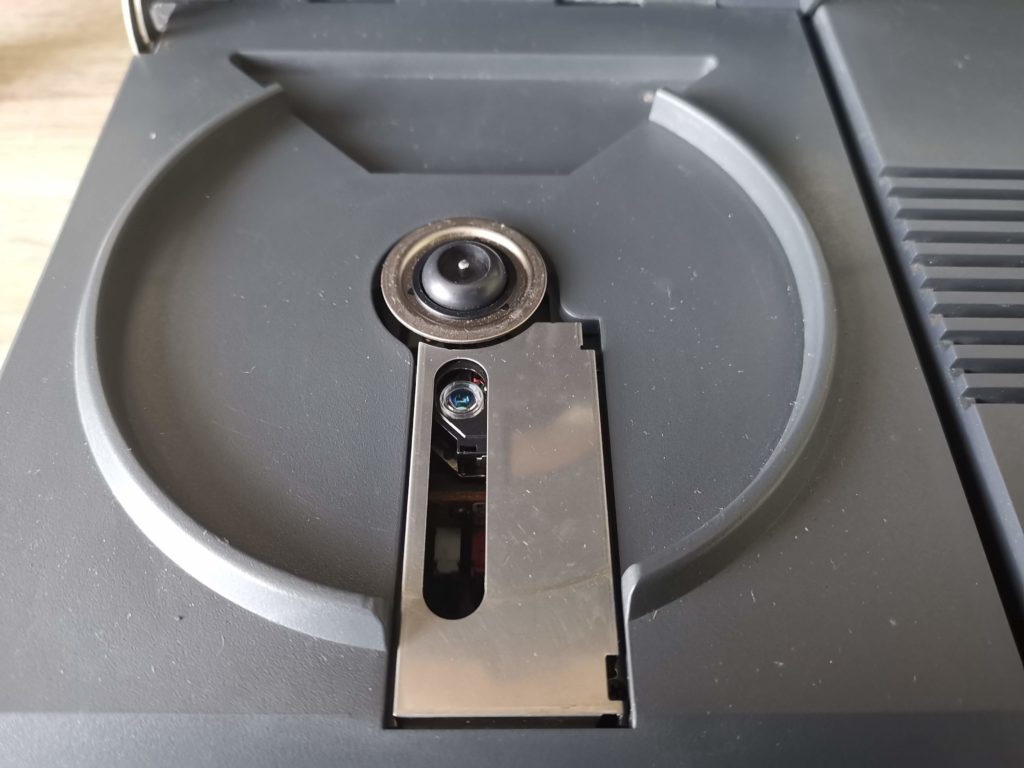 View of the CD tray and laser pickup.

The CD mechanism is pretty basic but it gets the job done. My CD32 came with a spare laser pickup assembly but hopefully I won’t need to use it for a long time! Discs don’t click into place like on a lot of modern CD players. Instead they’re held in place by the friction of the lid pressing down on the CD when it closes. 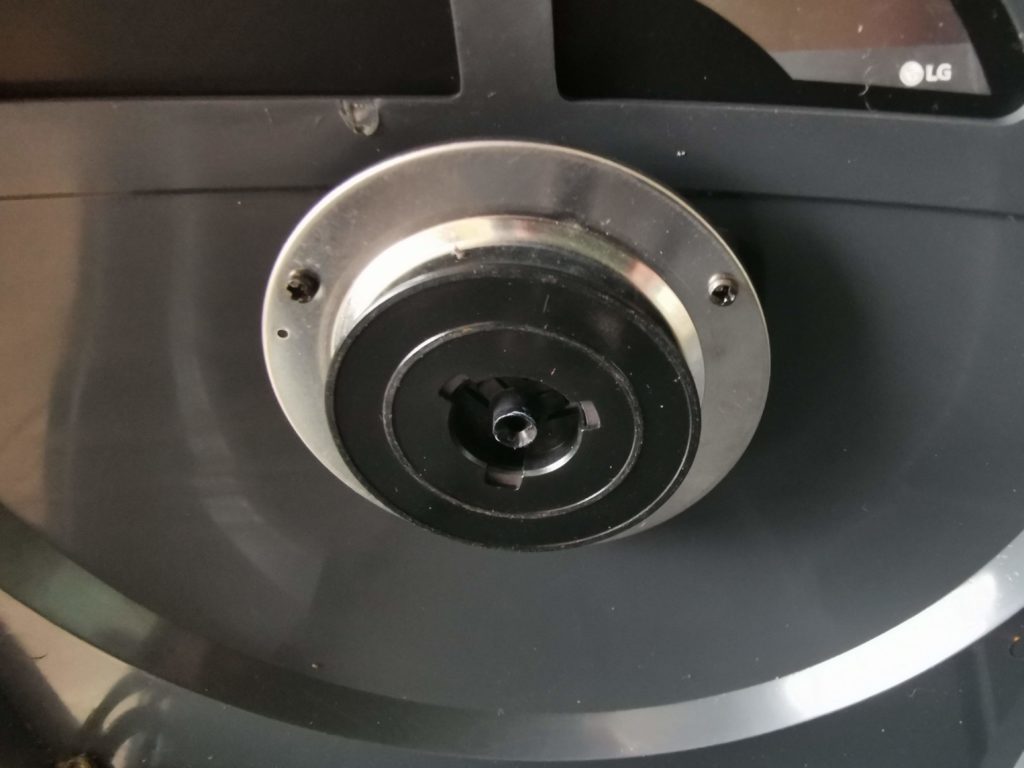 Inside of the lid. This is what presses down on a CD to grip it.

If there’s one facet of this CD32 console that concerns me, it’s this rear left corner. The rusty screws are an eyesore but also easily rectified. No, the thing that worries me is that it looks like the lid has cracked at some point and been glued back together. The repair actually looks quite effective and from a normal viewing distance isn’t that noticeable (I’ve zoomed in close in the above photo). However there is a spring loaded lever underneath this corner which ‘lifts’ the lid up automatically once you start to raise it and so this area is presumably under a lot of strain. I’m not going to do anything with it for the time being other than keep on eye on it. I will however be keeping my eyes peeled for a replacement lid just in case!

A Quick Peek Inside

Because, why not? Had to make sure that it had actually been re-capped as advertised (it had) at the very least! Also wanted to take a look at the Akiko chip which is only found in the CD32. This is the chip that allows it to convert planar to chunky graphics in hardware for 3D games.

The controller that came with my Amiga CD32 console is in superb condition. In fact I’d go as far as to say it’s in mint condition. It doesn’t look like it has ever been used. Sadly though it actually proved to be faulty – the D-pad ‘up’ just doesn’t work at all. Very disappointing – no idea what is wrong with it so will have to open it up and take a look soon.

Luckily I was able to pick up this Amiga CD32 compatible ‘Competition Pro’ gamepad off eBay pretty cheaply. Although it doesn’t look as cool as the official controller it works perfectly. At the end of the day that’s all that matters so I can still play with my new toy until I get around to sorting the original controller!

At the request of a reader here are some photos of the inside of the controller. The photos show that is is actually a ‘Honey Bee SF-3’ which is both on the back of the pad and printed onto the circuit board itself. Upon opening it up I also discovered that the insides were absolutely filthy! The board and contacts received a good cleaning with Isopropyl Alcohol before being reassembled. I hope the images prove useful and if anyone has any further interesting info about the controller please let me know I will be sure to update this page.

Sadly my CD32 console didn’t come with an original Commodore PSU but rather this modern one made by LaCie. Although given the ropy nature of some of the official C= PSU’s maybe that’s a good thing?

OK, I’ll confess that the scratched Amiga CD32 metal badge annoyed me more than I though it would. I started hunting around for a possible replacement. Replacement badges are quite commonplace for the Commodore 64 and Amiga computers so I had planned to replace my scratched up old one with a brand new one. Turns out CD32 badges are quite hard to come by. However I did come across a guy in Switzerland selling vinyl CD32 stickers on eBay that he claimed fitted exactly so I ordered one.

True to his word, the vinyl sticker was indeed a perfect fit in terms of size. It’s also a very close match in colour and tone to the original, certainly close enough for me anyway. It was a little tricky to get it lined up perfectly, but now it’s in place I think it looks fantastic. Sure it’s not quite as glossy as the original, it’s got more of a silk finish, but I’m very happy with the end result.

FYI, I didn’t remove the original badge – I simply stuck the new one on top of the old metal one. The reason I did this was so that if I ever wanted to go back to a 100% original finish I could simply peel the new one off.

Here’s a quick video I did of the awesome CD32 boot-up sequence. This must have been amazing back when it launched, two years before Sony’s original PlayStation in the UK! The quality is a little bit ropy as it’s only connected up to my TV using composite video at the moment.

Definitely time to dig out my CD32 Scene magazines and see what games I need to buy to start my collection!