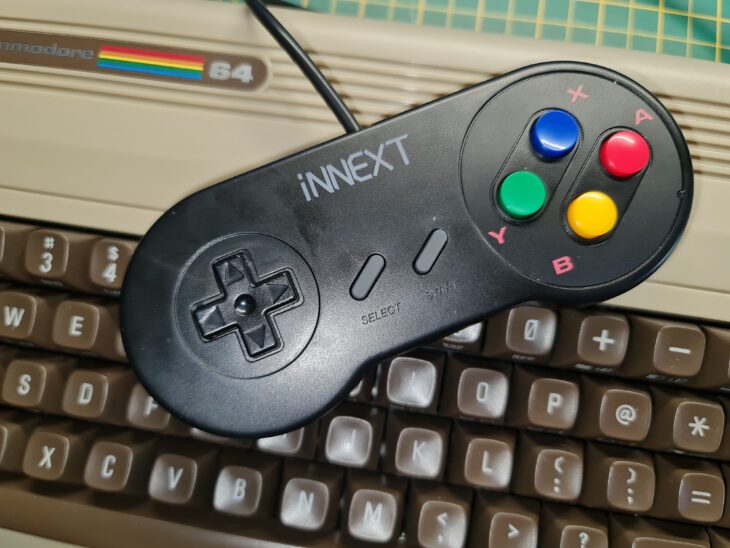 Just picked up an iNNEXT USB Game Controller off Amazon to use with my TheC64 Mini and Maxi consoles. Why? Well unfortunately after almost 40 years of faithful service my C64C has started to act up. It’s been crashing and freezing whilst playing games that have always run flawlessly before. I’ve ran my diagnostic cart on it and everything passed so I’m hoping it’s just the electrolytic capacitors. My C64C has never been recapped before so it’s been packaged up carefully and sent away to an expert to get them all replaced. I decided not to attempt it myself as I don’t want to risk causing further damage with my dodgy soldering skills! I’ll know the outcome of this in a couple of weeks when I get it back.

Anyway, in the mean time I still want to be able to play my C64 games without having to resort to the Zip stick wannabe’s that the Mini/Maxi consoles come with. Even though the stick that came with the Maxi is much improved I just prefer a gamepad controller these days. 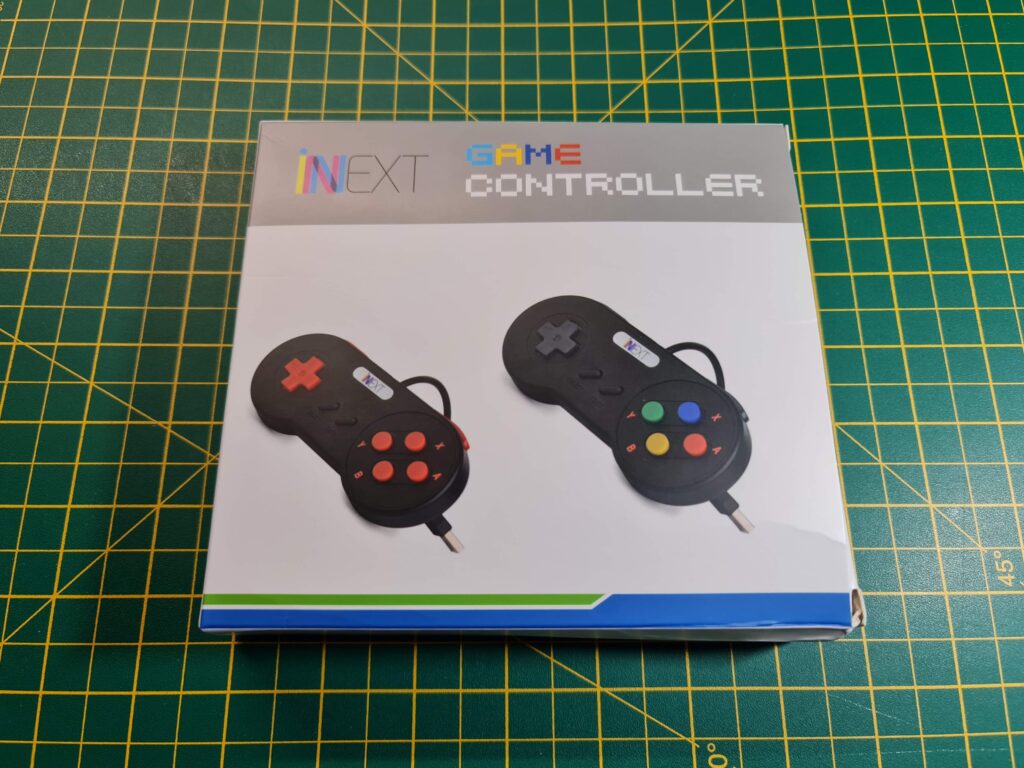 I’m sure there are other controllers out there that will work but I chose these for a number of reasons. The most important one being that in addition to the D-pad they have 8 buttons, matching the number of buttons on TheC64 joystick. They also looked great and came in a pack of 2 for a reasonable price. I was a little apprehensive when purchasing as I wasn’t sure if all the buttons would actually be recognised by the console. This is why I thought I’d share my experience in case anyone else is looking for a similar gamepad for their TheC64’s. 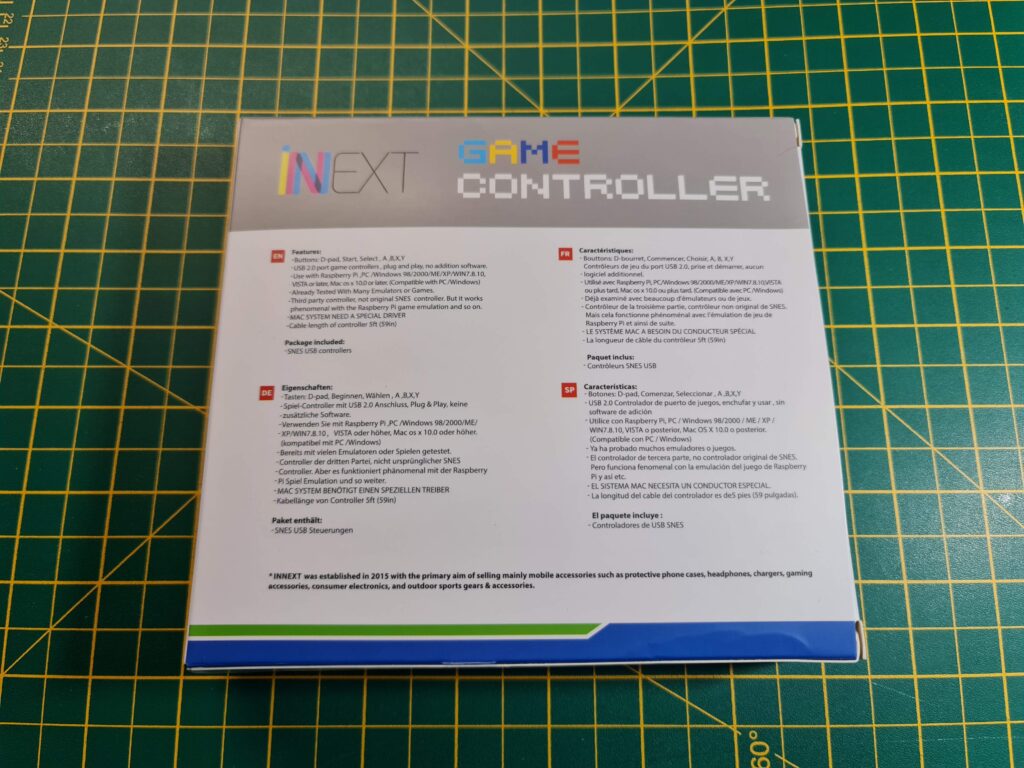 I was fully expecting a nondescript plain box as is often the case with cheap Chinese goods. However the gamepads came supplied in a surprisingly attractive box featuring product shots of the controllers on the front. The reverse side lists all the gamepad features in multiple languages. 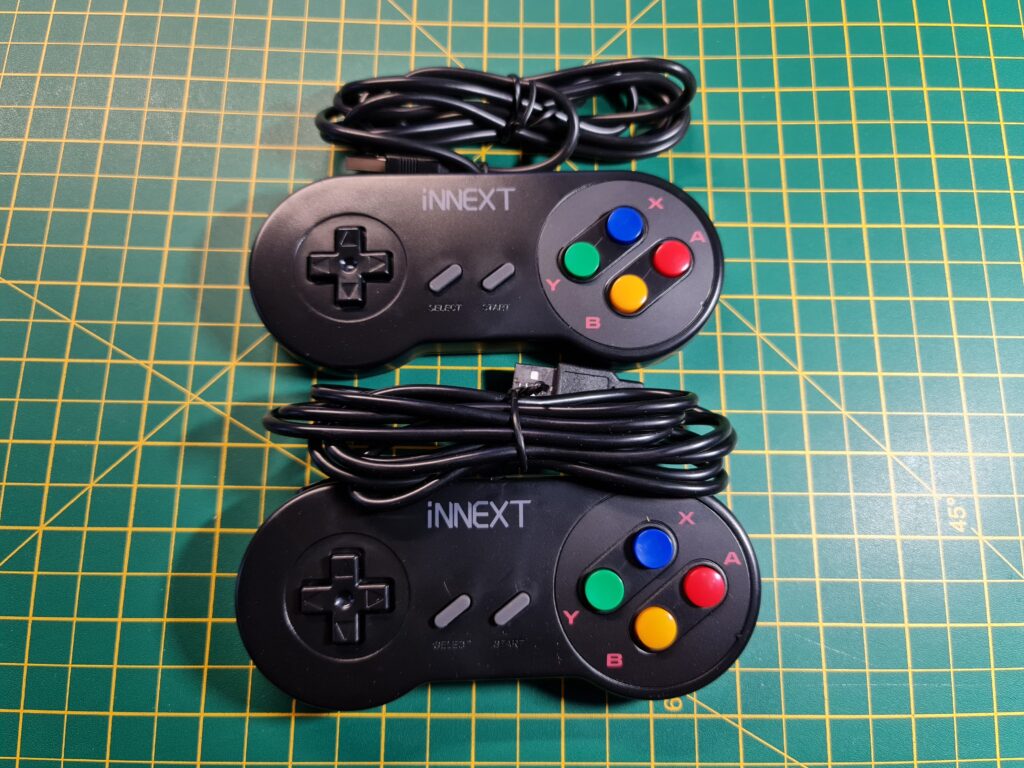 The iNNEXT USB Game controllers themselves are styled like the old SNES gamepads. In addition to the D-Pad they have ‘Select’, ‘Start’, ‘A’, ‘B’, ‘X’, ‘Y’ and two shoulder buttons. Altogether this makes 8 buttons plus the direction controls which matches the configuration of the TheC64 joysticks exactly.

Taking a Peek Inside

The build quality of the pads is really good and although they’re pretty lightweight, they feel solid and well constructed. They certainly didn’t creak or flex in my hands, even when I deliberately tried to bend them. The D-Pads worked well and the buttons have a decent tactile feel to them when pressed. They didn’t feel spongey or rubbery so I was never in any doubt as to whether I had pressed one or not. One little feature I appreciated was the contrasting convex and concave buttons for the XY and AB buttons which made it easier to know what I was pressing in low light. 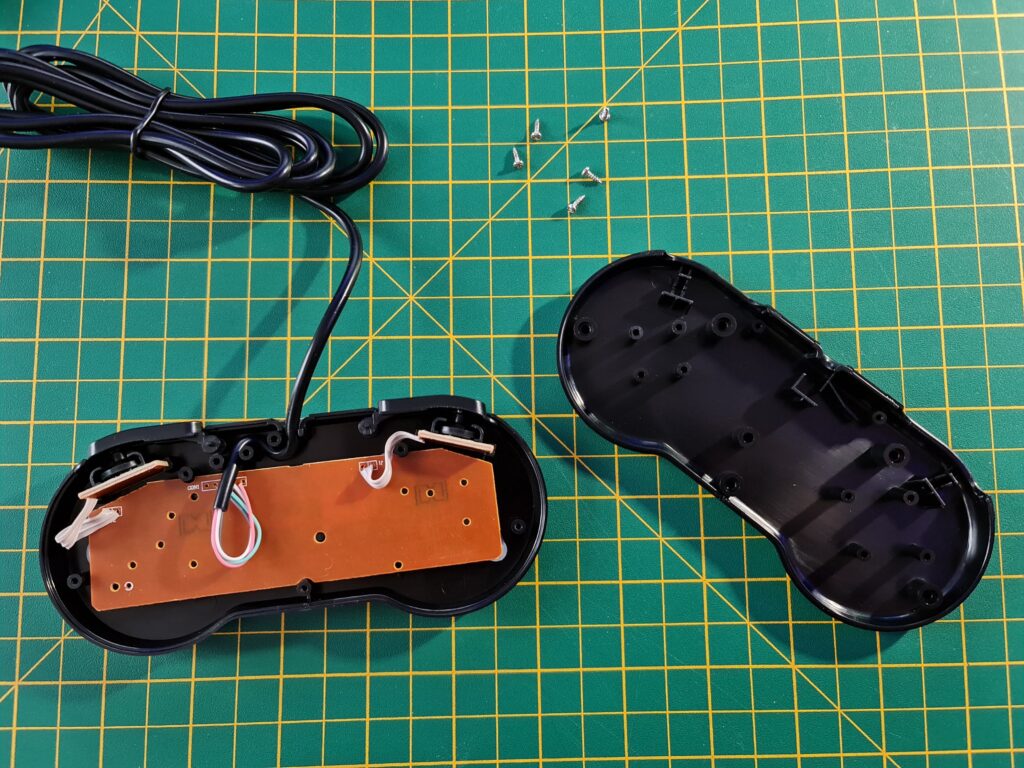 The cable is approximately 5 foot long (1.5m) which I found was more than long enough for my needs. The gamepad shell itself is held together with 5 small philips screws. Naturally my curiosity got the better of me and I took it apart to see what was inside. 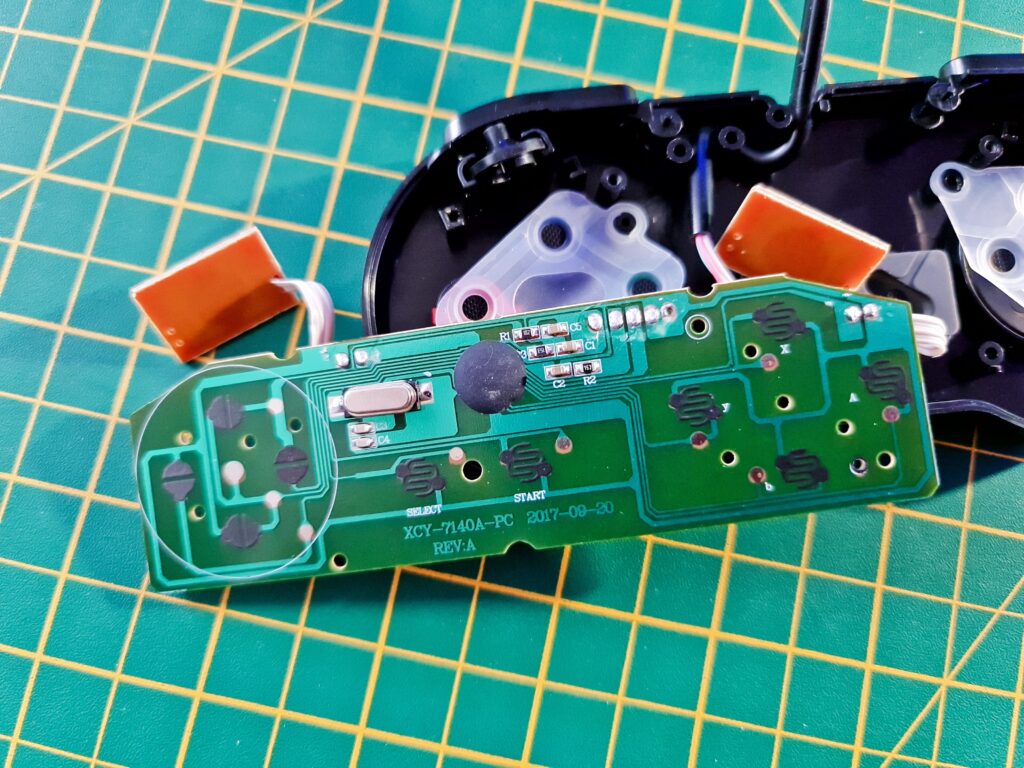 As I should have expected from a modern piece of electronics, there wasn’t really much to see. Still, at least my curiosity was sated! 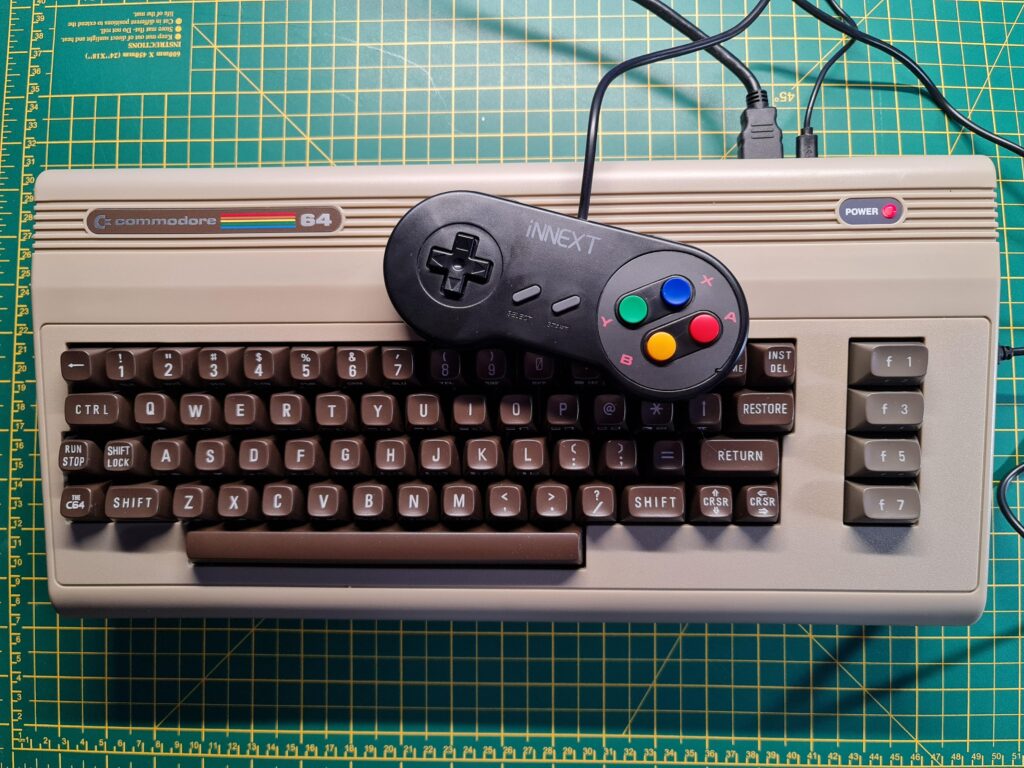 *Just in case anyone wants to know where I got the Commodore 64 badge from – check out my post here.

The controller just worked out of the box with the games I tried on TheC64 Maxi carousel. By default both shoulder buttons are configured as ‘Fire’ buttons which I found worked pretty well. The Start button brings up the ‘save state’ menu whilst X and Y operate the two triangular buttons. The first three round buttons on the base of the Joystick are replicated by the A, B and Select buttons. So that was every one of the joystick buttons replicated successfully. 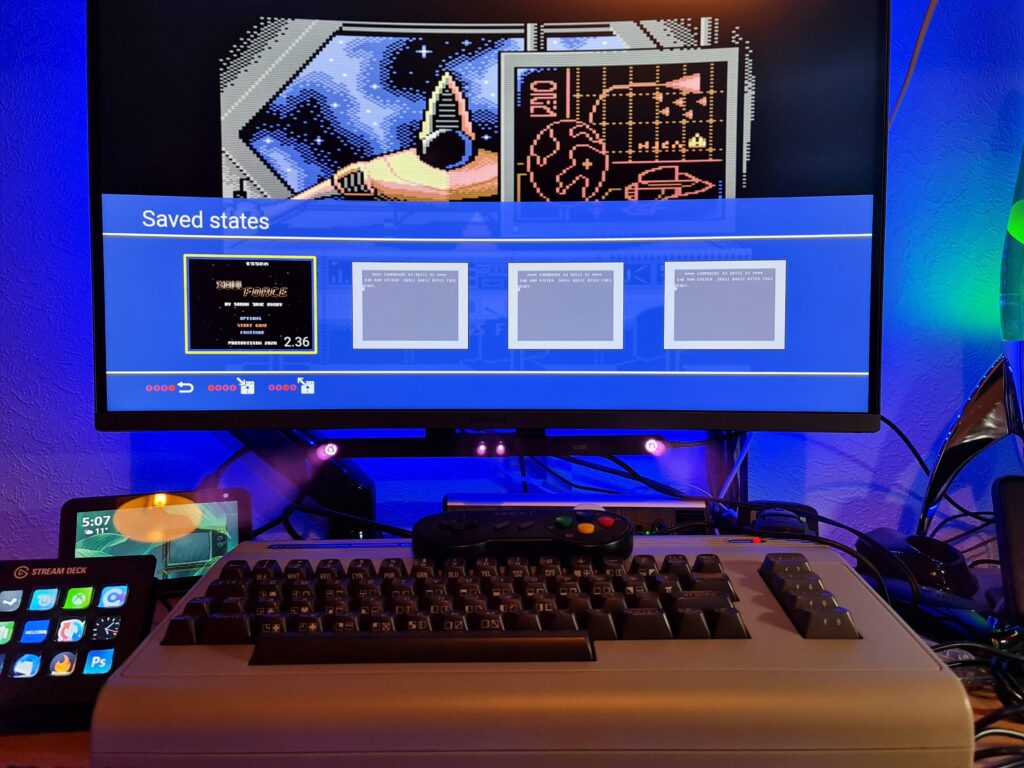 iNNEXT USB Game Controller being used to bring up the Save State menu during a game of Soul Force.

I tried a number of non carousel games off a USB flash drive too like Galencia and Soul Force. Happily I experienced no issues at all with these either. Of course if there had been problems there’s always the option of creating custom .CJM files to change the button configuration for specific games if needs be too.

Perhaps you’d like the left shoulder button to operate the spacebar in Ghostbusters for example? No problem, simply add that to a Ghostbusters.CJM file and you can get your C64 shouting ‘Ghostbusters’ without reaching for the keyboard. This is an even more useful feature when dealing with the keyboard-less TheC64 Mini..

All in all I think these are terrific gamepads and fulfil their retro gaming duties admirably. They’re very reasonably priced, well built, comfortable to hold and work exactly as I’d hoped. I’ll be keeping the 2nd pad as a spare but there’s no reason why you couldn’t plug them both in and enjoy some 2-player games like Pit Stop II or Spy vs Spy. Oh and they work perfectly on PC as well, whether for native PC gaming or some retro emulator action. Definitely recommended. 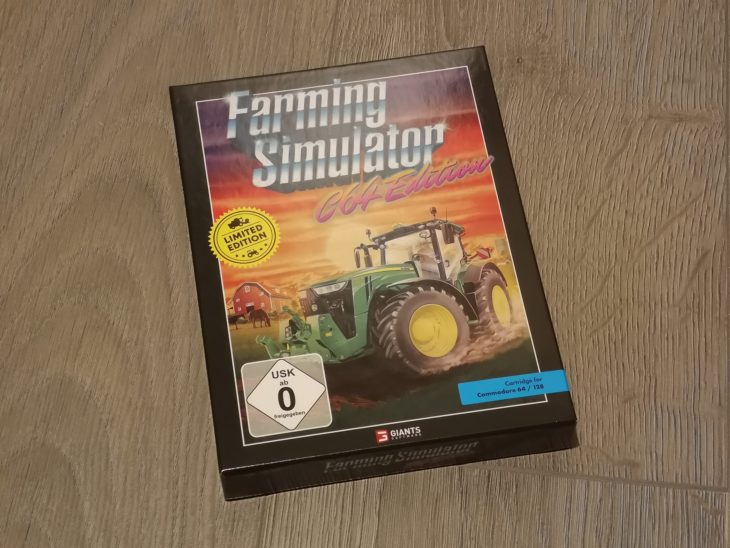 So here’s my look at Farming Simulator C64 Edition and the various options available if you want to get hold of a copy. Apparently this started life as an April fools joke but took on a life of its’ own as one of the programmers had friends active in the C64 scene. 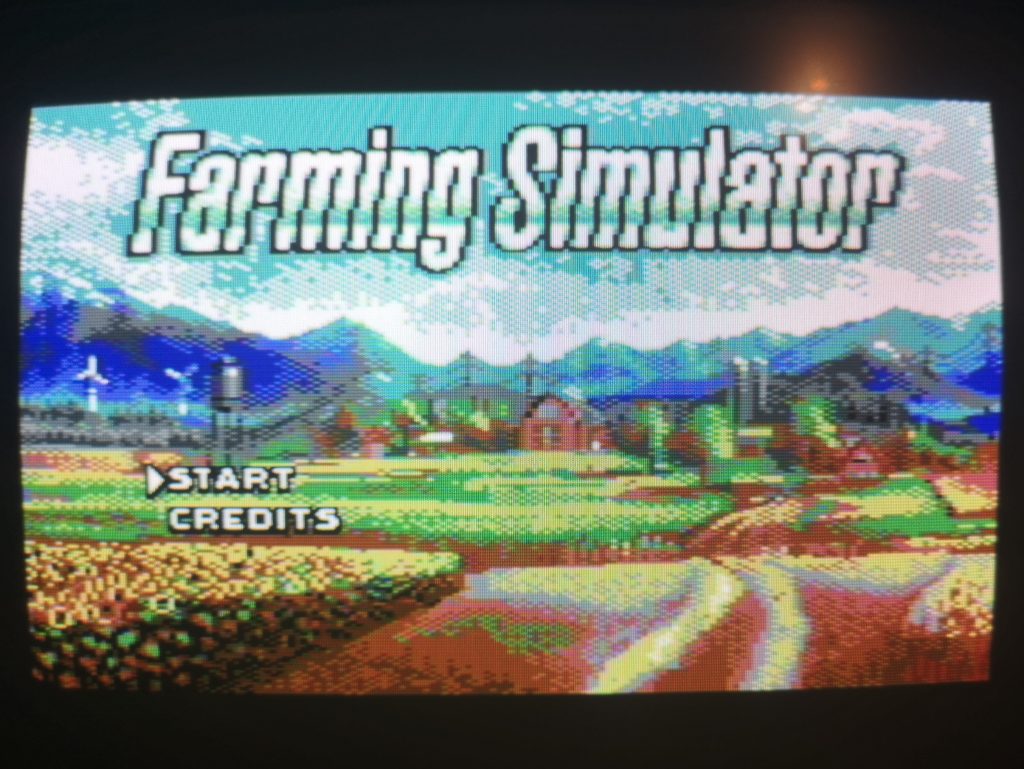 At the moment there are only two ways to get hold of the game in the here and now. The cheapest and by far the quickest is to head on over to the Farming Simulator website and pick up a digital copy of the game for €4.99. Although it states ‘PC Version’ you will actually get C64 software cartridge/disk images that you can run on the included emulator, C64 Mini or on a real C64 via an SD2IEC type device. 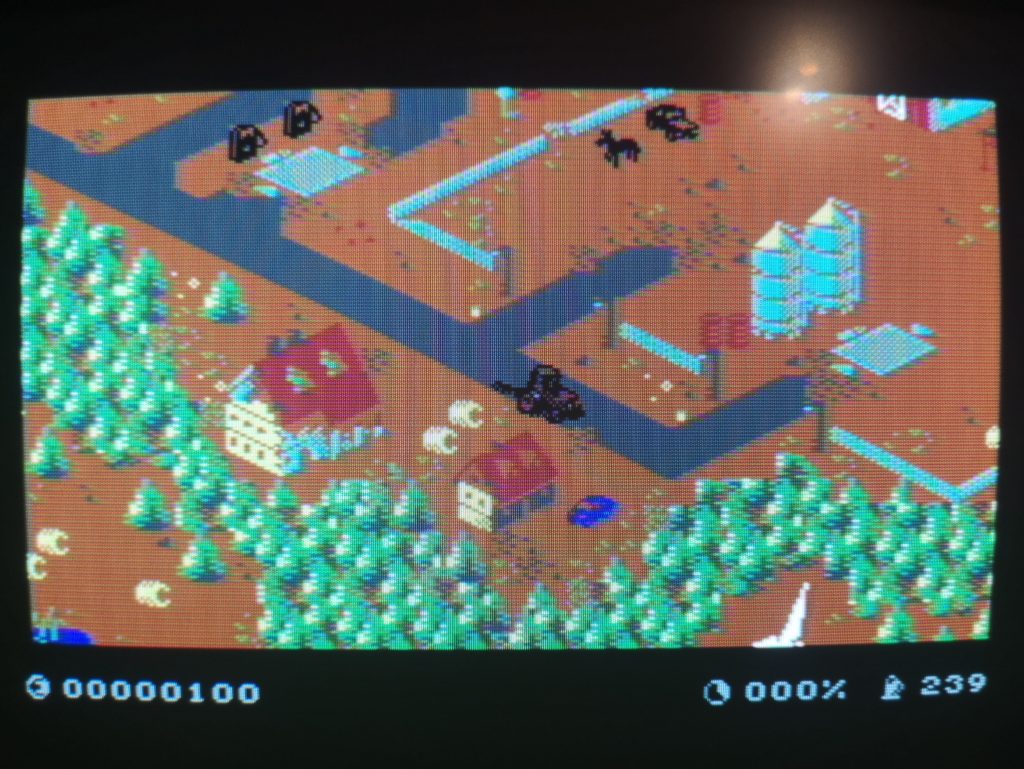 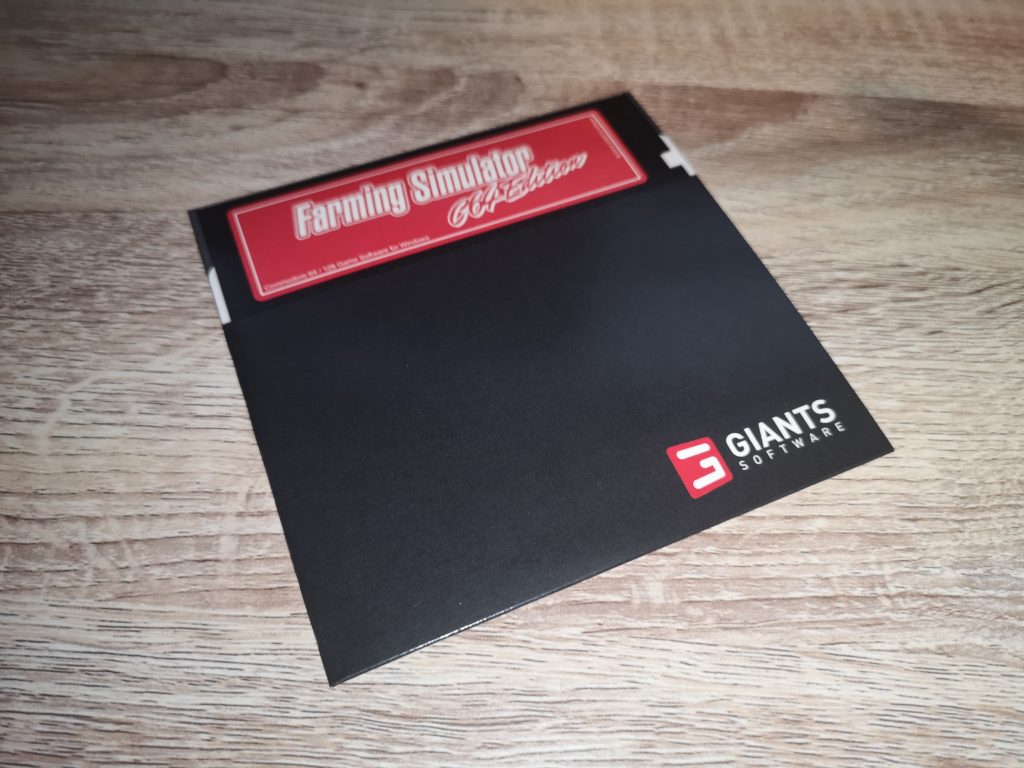 At first glance it appears to be a 5.25″ Floppy Disk, but in reality it’s actually a carefully designed cardboard CD wallet. Inside you will get a nicely designed ‘C64 Edition’ CD with a digital version of the game on it along with the necessary emulators to run it on a PC should you wish to do so. There is also a copy of the manual in PDF format, presented in multiple languages. 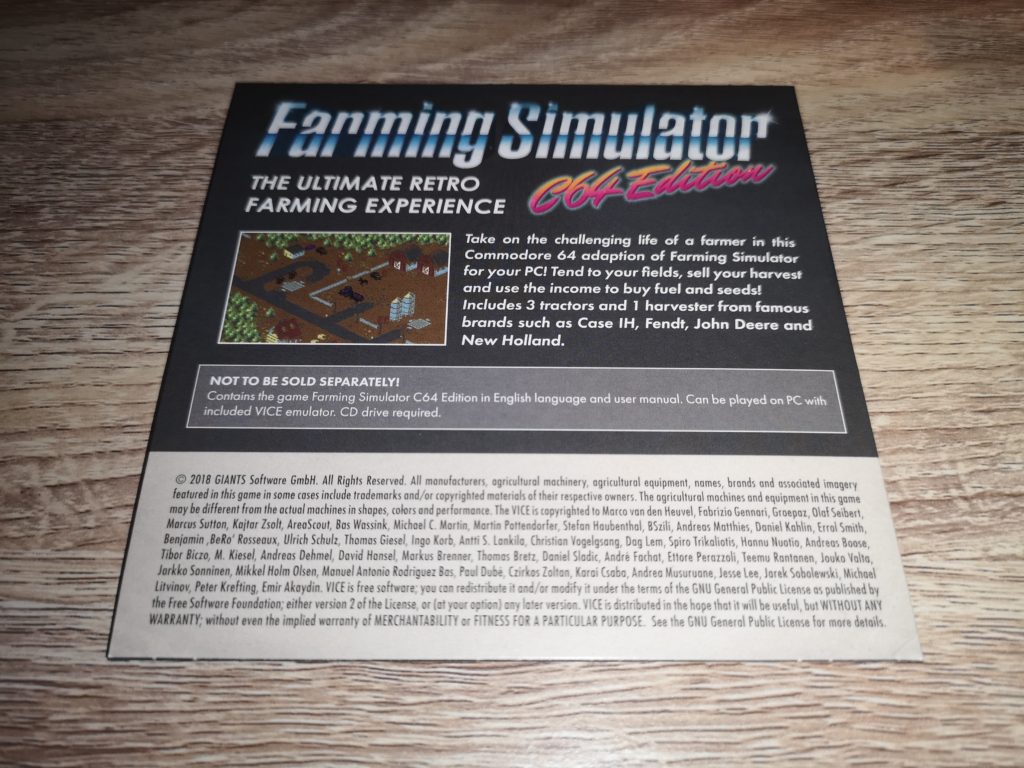 Rear of the CD wallet 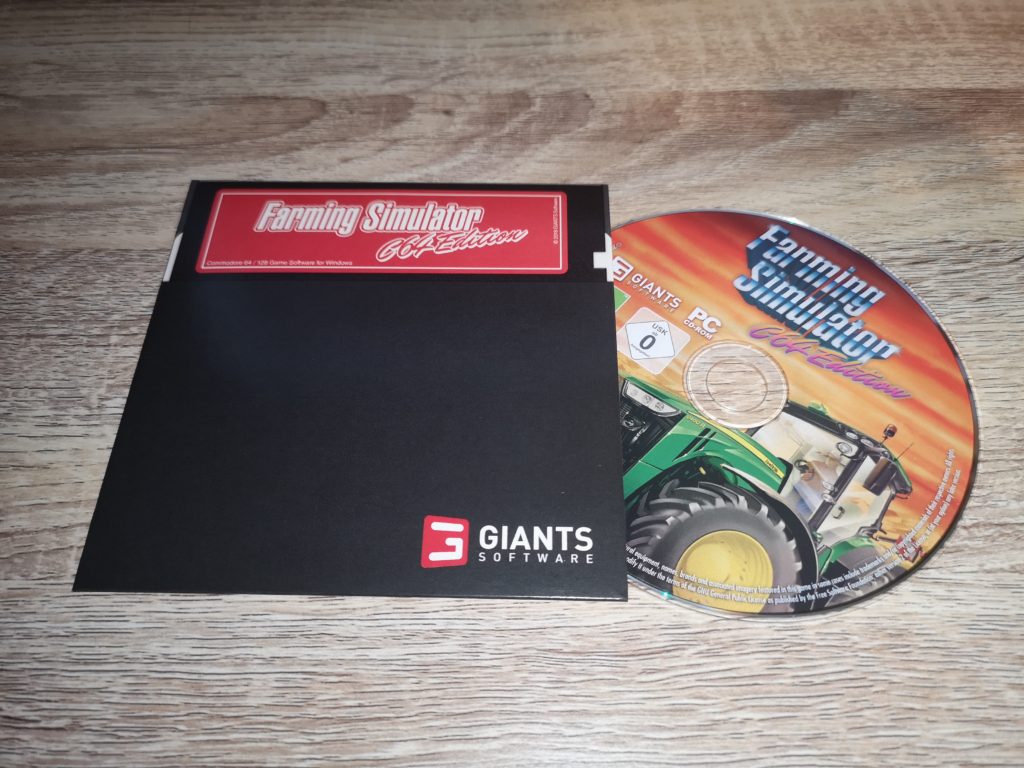 The CD sliding out of the “Floppy Disc” wallet

Now this might seem like an expensive way to get hold of ‘Farming Simulator C64 Edition’ but you do get a really nice big collectors edition box, 10 stickers, a beanie hat, a DVD containing a ton of tutorial videos, 5 concept art cards, exclusive DLC content, a miniature John Deere tractor, 2 A2 posters and of course the full PC game on DVD for the PC. 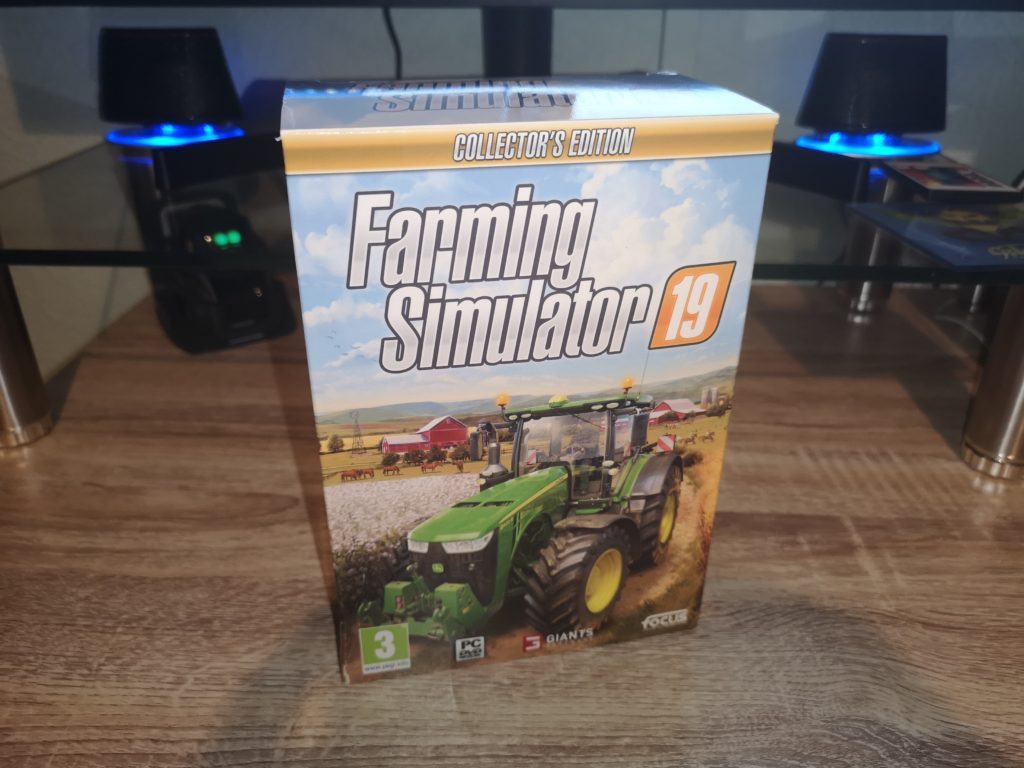 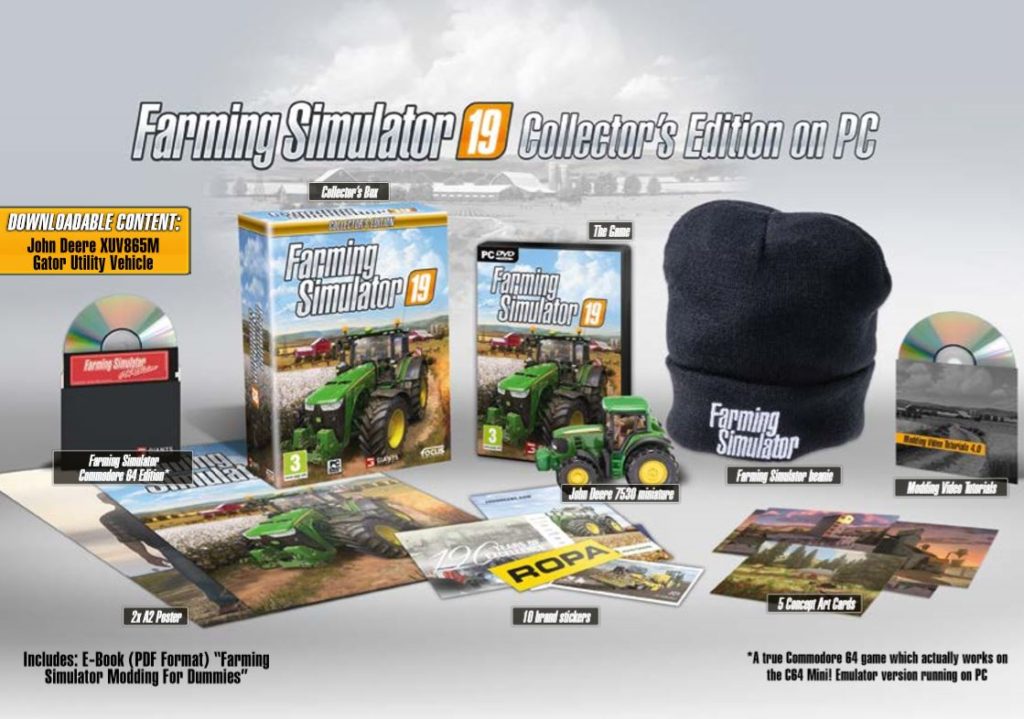 If you are only interested in the C64 version this might not be the choice for you. However if you’ve got even a passing interest in playing the PC version then this option begins to make a lot of sense. 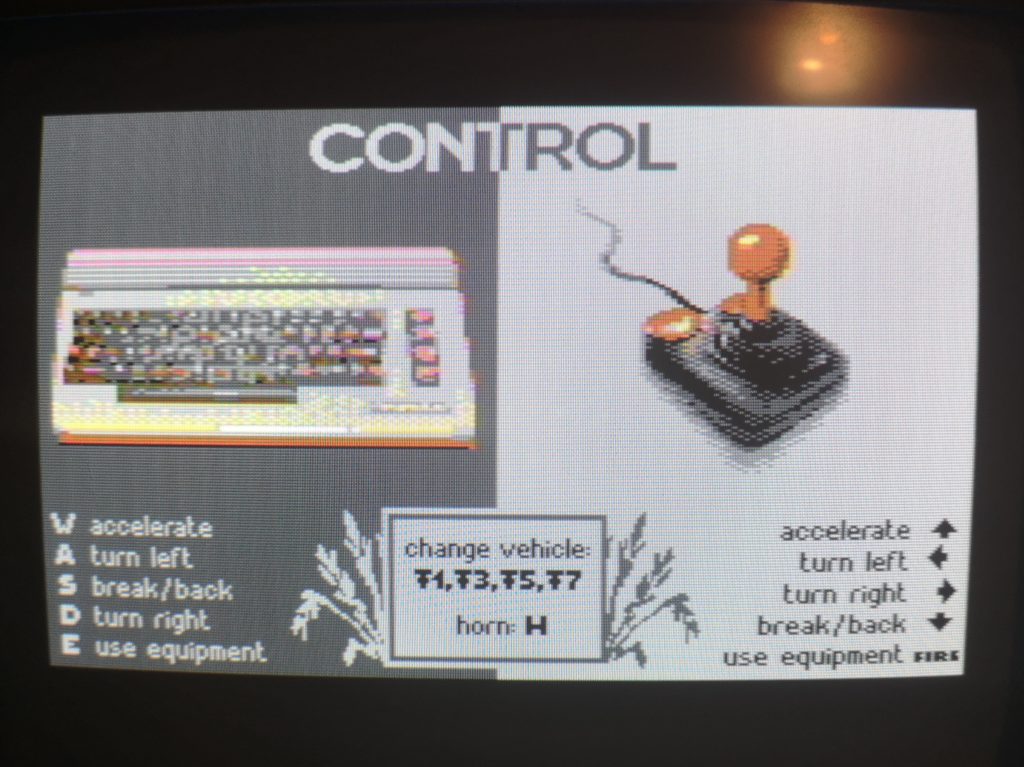 Finally, if you want Farming Simulator C64 Edition in a physical C64 themed box complete with the game on a proper C64 Cartridge then you can place a pre-order for the game from Protovision. This will also ship with an instruction book and the aforementioned CD version of the game for use with emulators or the C64 Mini.  The cost for this version is €50 plus postage. Granted it’s a lot more and you don’t get the PC version but for collectors this will be a tempting choice. At the time of writing this post they currently have no stock available.

*UPDATE 1 – 9th December – As of this morning they have 12 copies of the game left in stock!

*UPDATE 2 – 18th December – After snagging one of those 12 copies it has now arrived safely so here’s a few pictures of what you get inside. Unlike the PC Collectors Edition this one has been made especially for the C64 and in very limited quantities it would seem!

Inside the box is the same copy of the game on CD as found in the PC collectors edition. There is also a nice little instruction booklet and of course the main event… a proper physical cartridge containing the Farming Simulator C64 Edition game itself.  Needless to say I’m really happy I managed to get my hands on a copy of this!

*UPDATE 3 – 21st December – Looks like the cartridge version is no longer available to purchase. The listing for it on Protovision’s website has vanished. Not sure exactly when it disappeared. 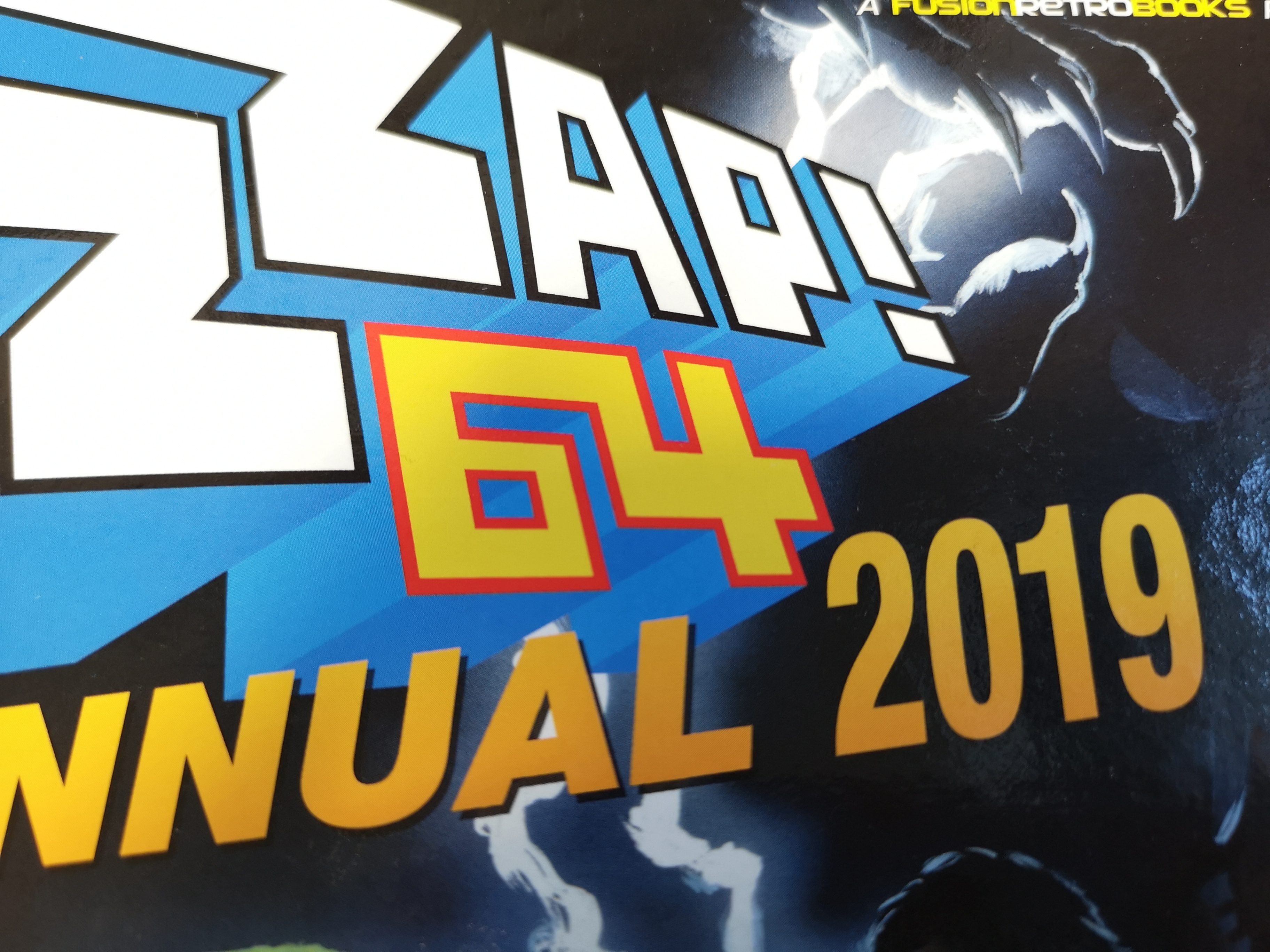 How cool is this, just received the brand new Zzap! 64 Annual 2019 through the post! This really takes me back to my childhood when every Christmas I would get at least one annual in my stocking. I used to love receiving these as they were always crammed with content that I could while away the hours reading in my bedroom. This is no exception, in fact it may be the most jam-packed annual I’ve ever had with nearly 130 pages bursting at the seams with fascinating 64 related articles, reviews and information. 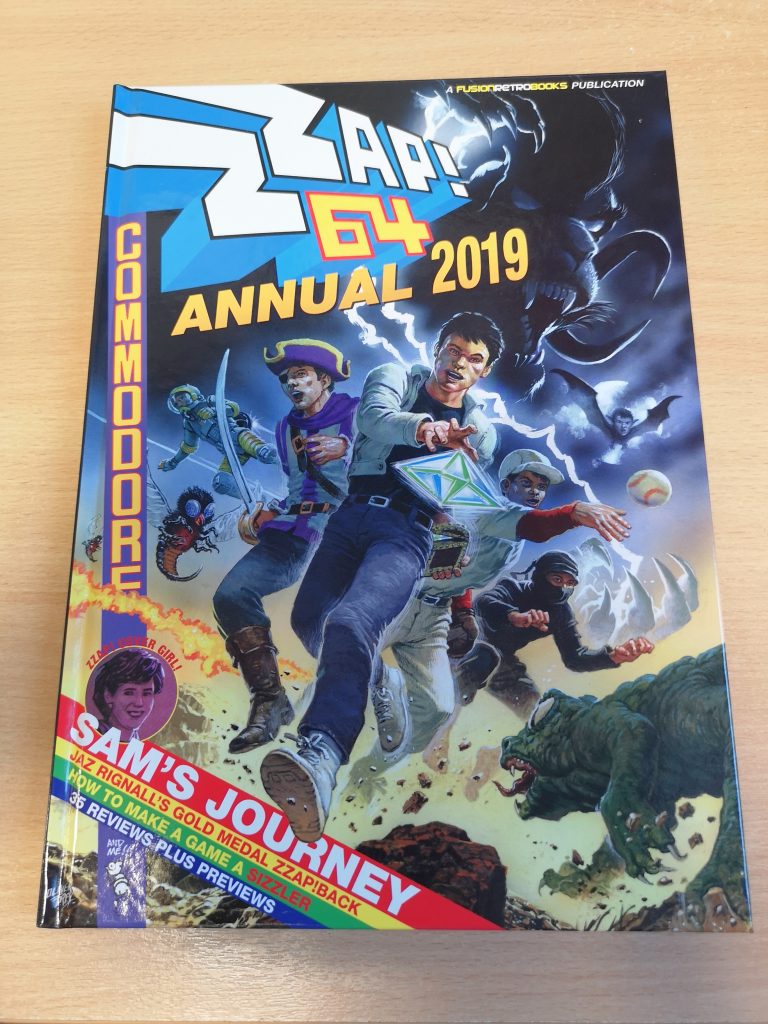 Oliver Frey artwork on the cover

I backed this project on Kickstarter earlier this year and am so very glad I did. It’s probably one of the quickest (to finish) campaigns I’ve ever backed with the whole thing taking around 6 months from backing to receiving the goods. The cover had been kept under wraps so that it would be a surprise and features original artwork by Oliver Frey. Oliver’s work seems to be popping up all over the 64 scene of late, but needless to say it’s another quality illustration. There’s also a 2019 calendar included that’s packed with more of Oliver’s handywork and I can’t wait to display that on my wall come January. 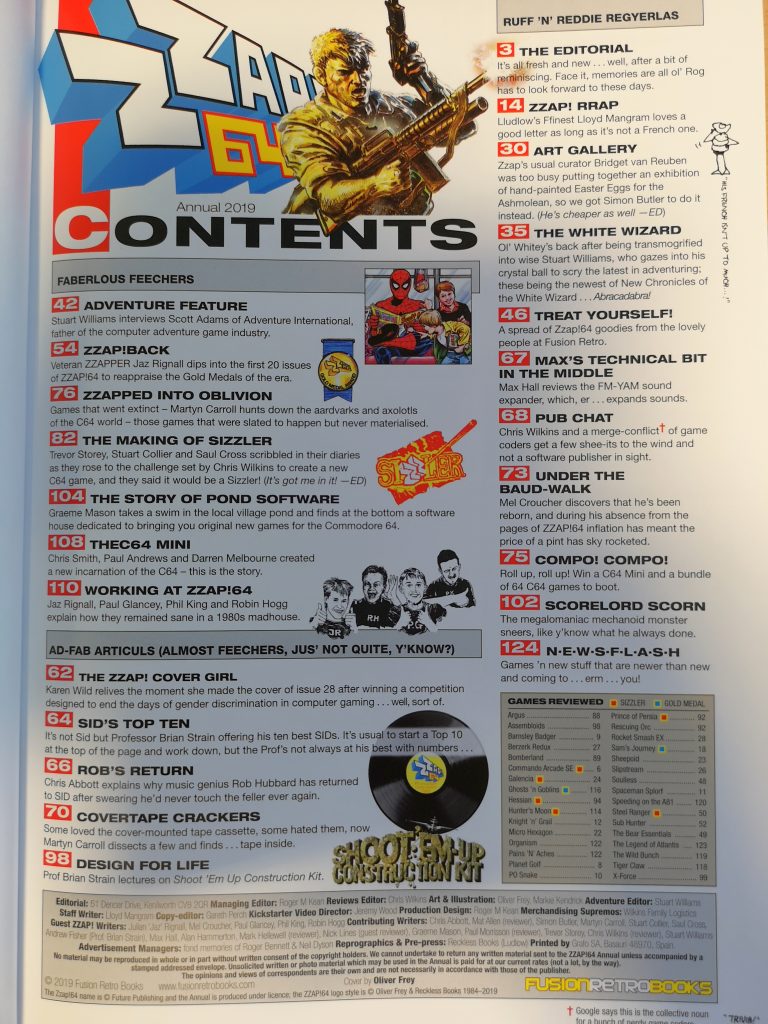 Contents page looks like it’s been lifted straight from an 1980’s copy of Zzap! 64

The art style and layout is instantly familiar. I’m delighted to see they’ve revived the little caricatures of the reviewers although they have ‘aged’ them to reflect the fact that these guys are now some 30 odd years older! But then aren’t we all…? 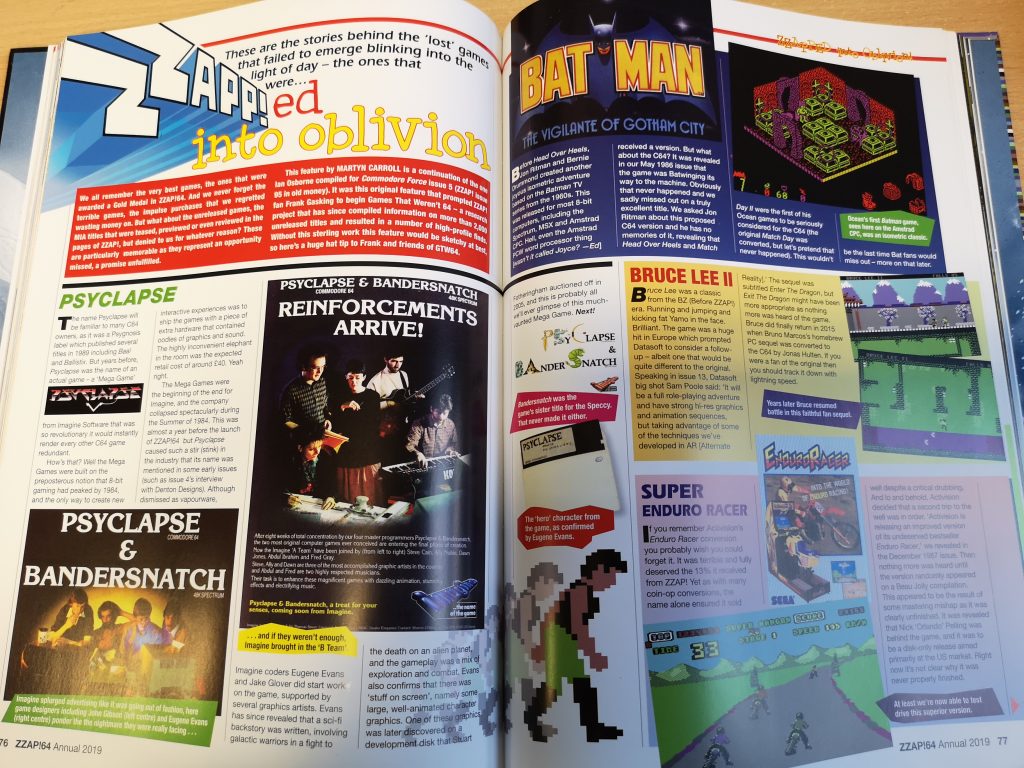 It doesn’t just cover stuff from the past though. There are plenty of articles and reviews about the current the Commodore 64 scene including an in depth look at The C64 Mini that released earlier this year. All in all it’s a fantastic read and one of the best projects I’ve backed on Kickstarter so far. If they decide to make another annual next year (which they are already talking about) then I’m all in. 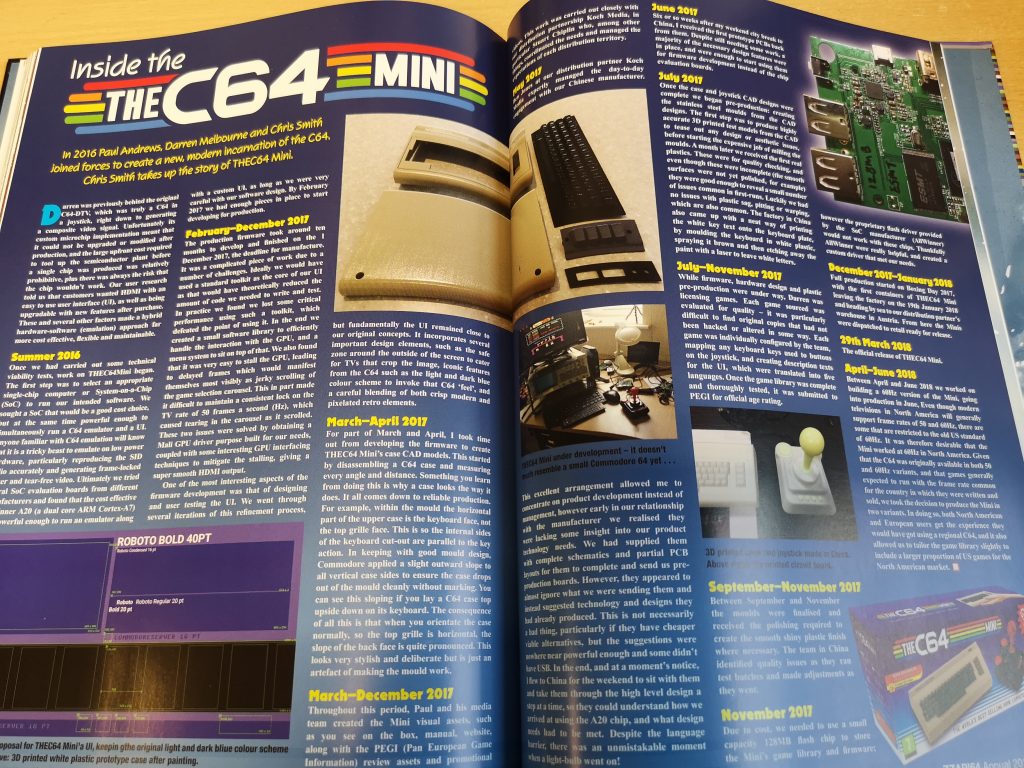 The C64 Mini gets an in-depth looking at!

Now that the  Kickstarter is over it looks like you can buy the annual directly from the Fusion Retro Books website for £15 although how many extra copies they made over and above the Kickstarter ones I don’t know.