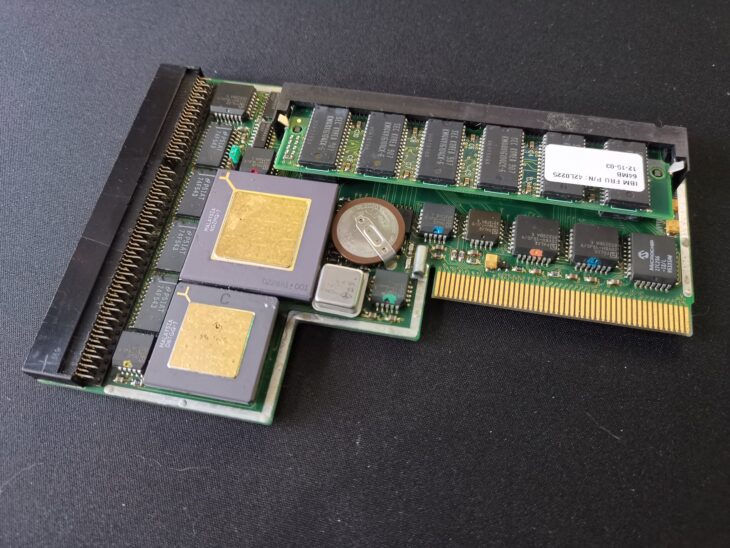 I recently managed to pick up a nice Blizzard 1230 MkIV accelerator off eBay which arrived a couple of days ago. I reckon I was probably just as excited to get this one in 2020 as I was back in the 90’s when I got my first one!

After opening it up I gave it a good visual once over and everything looked to be in good order. Not sure why the markings have come off the top of the chips but I won’t see them once it’s installed anyway.

Some Information about the Blizzard 1230 MkIV

My 1230 was made by Phase 5 Technologies which is the original manufacturer of the cards. Unfortunately Blizzard went out of business so later cards were manufactured by a company called DCE. Ironically it looks as though DCE still exists to this day making electronic circuit boards! 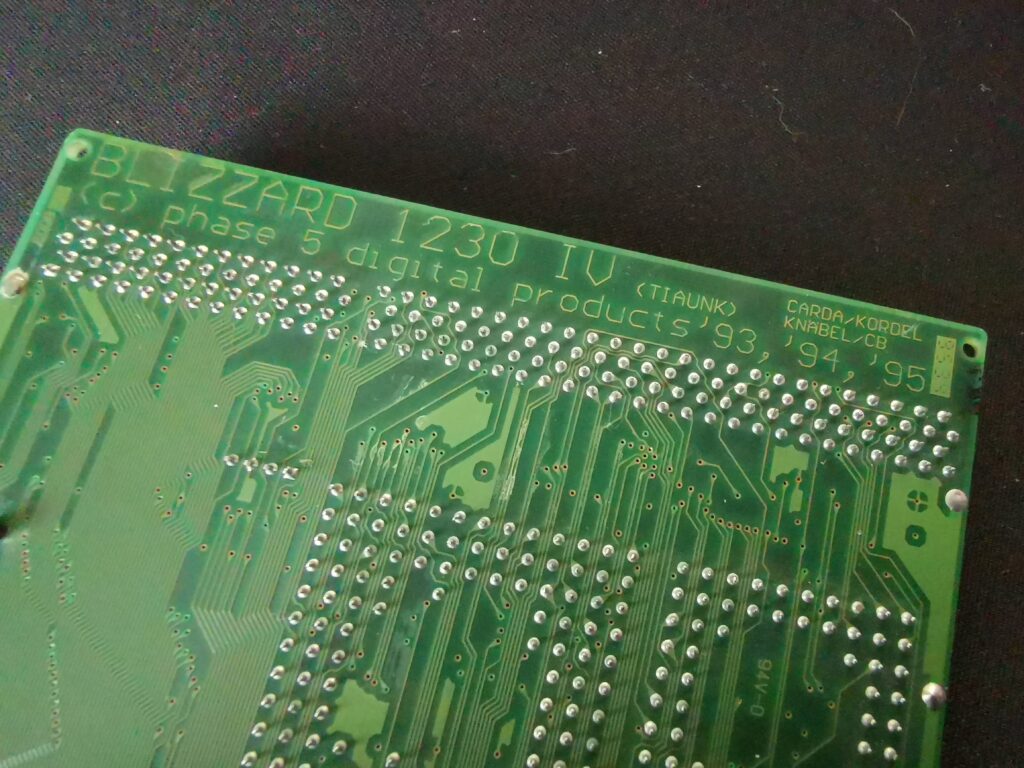 I’m guessing this was manufactured some time in 1995 looking at the board.

As standard the Blizzard 1230 MkIV comes with a 50Mhz Motorola 68030 Processor and can be fitted with a single 72 pin SIMM up to 128MB in size. Mine came fitted with a 64MB SIMM. The exposed edge connector is where an optional Blizzard 1230-IV Fast SCSI-II controller module can be attached. The SCSI module actually incorporates a second 72 pin SIMM slot meaning you could theoretically add a whopping 256MB of FAST RAM to your A1200 if you wanted to! Of course now I want to do just that but the SCSI modules are super rare these days! 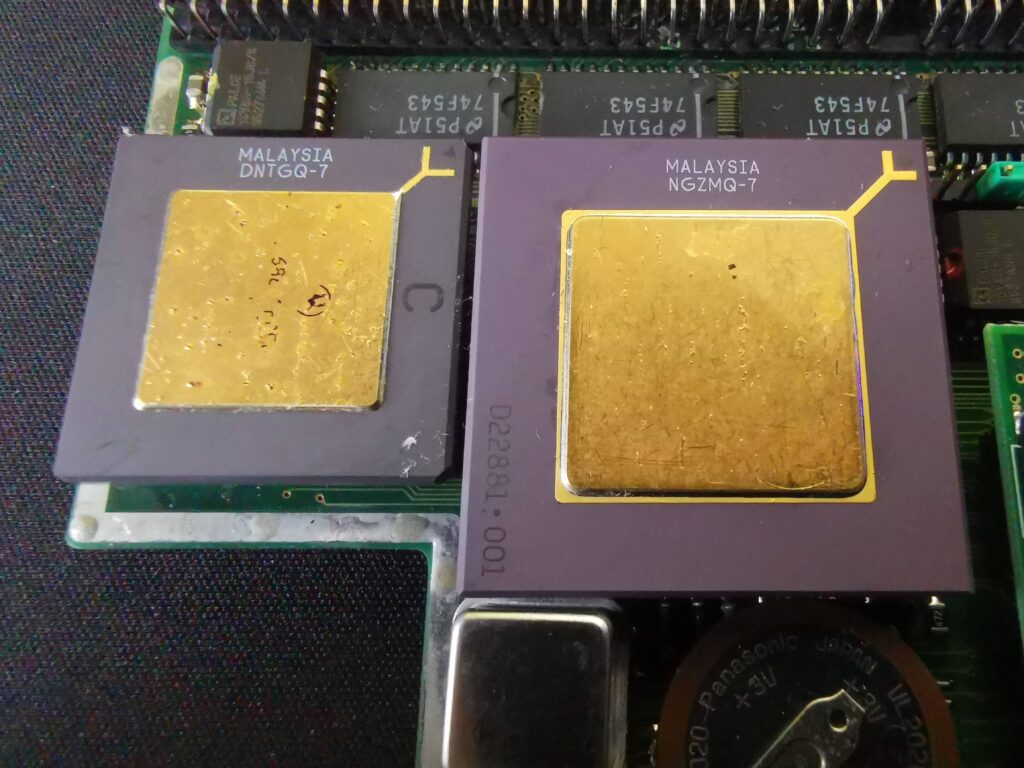 I made sure I got one with the FPU installed as this was not included as standard. These were never strictly necessary and most software didn’t benefit from having one. However VistaPro (one of my favourite programs) is just one such title that relies heavily on having one. The FPU really makes a significant speed difference for programs like this that involved performing a lot of complex mathematical calculations. 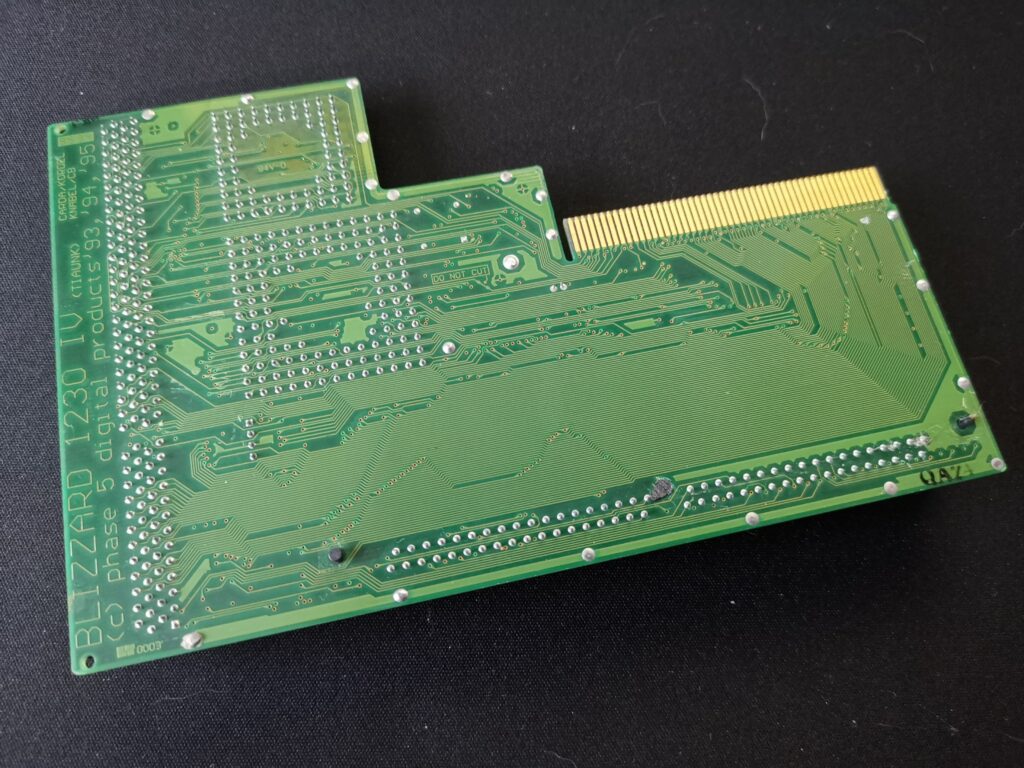 View of the reverse side of the board.

I’d forgotten just how snuggly the Blizzard 1230 fitted inside an A1200. After triple-checking it was correctly aligned I needed to gave the card a worryingly forceful push before it finally clicked into position. 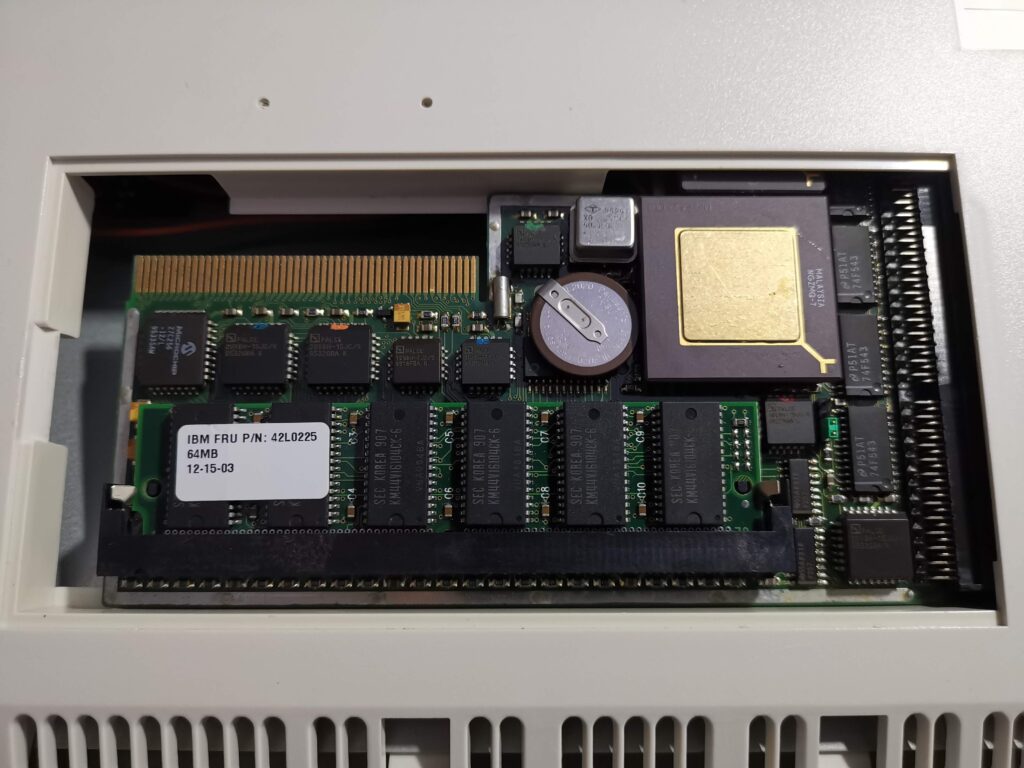 This is how the card looks fitted inside my A1200. The edge connector, visible on the upper left, is for the optional SCSI module. If I ever come across one I’ll add it to my setup for sure.

Of course the real moment of truth was turning the Amiga on. Happily this proved to be completely uneventful. Workbench booted up without a hitch and reported 65,957,656Mb of Fast RAM which was a great start. 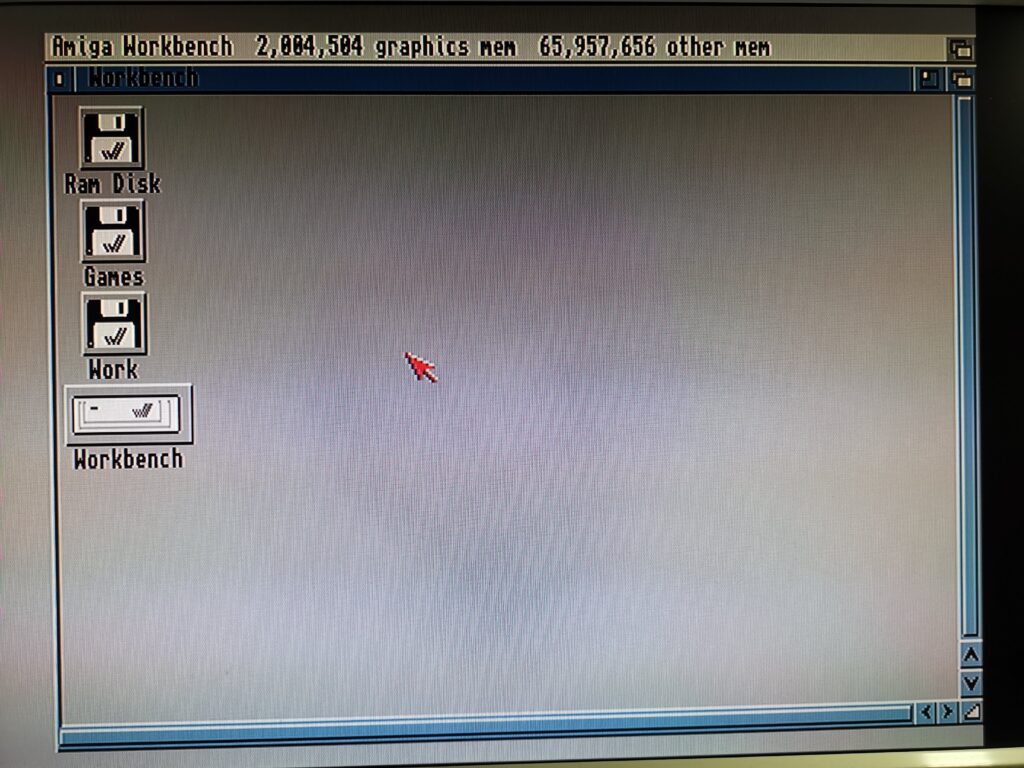 The next test was to load up the classic Sysinfo and make sure the CPU and FPU were correctly identified, which they were. Of course you can’t load Sysinfo and not run a quick speed test! My Blizzard equipped Amiga topped out at 9312 Dhrystones, or 9.72 Mips. Basically twice as fast as a 25Mhz A3000 which is exactly what you would expect.

Of course it’s nowhere near as fast as my Vampire equipped A500 and it actually cost quite a bit more too. But you know what? I don’t care. This just ‘feels’ right. The best way I can describe it is if you imagine upgrading a classic car. The Blizzard is like fitting a period authentic performance exhaust and carburettor to the engine whereas the Vampire is like replacing the whole engine with an electric one. Don’t get me wrong, the Vampire is an amazing piece of hardware and you can’t beat it in terms of value for money. However absolute power is not my goal here… it’s having an authentic Amiga experience. 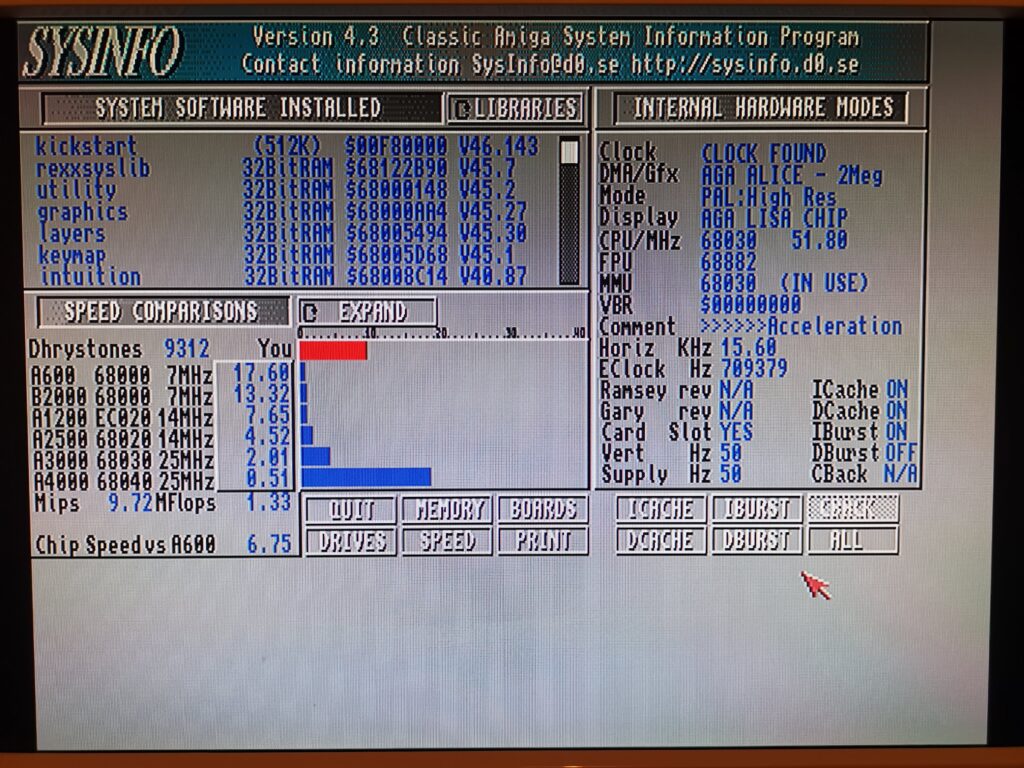 Anyway enough of that. There was one final test that would take a little longer to complete. The Blizzard incorporates a 3V rechargeable battery backed clock for keeping track of the date and time. However when I plugged the card in the date/time were completely wrong. The seller told me the card hadn’t been used in years which is why he was selling it so this wasn’t unexpected.

To test the battery I set the date and time correctly and then left the Amiga turned on for a couple of hours before going to bed. This would hopefully give it a chance to get some charge before turning it off for the night. Booting it up the following evening revealed it had retained the correct time so the battery was still working! Of course the battery may no longer hold enough charge to last for extended periods but for now I’m happy that everything appears to work perfectly! 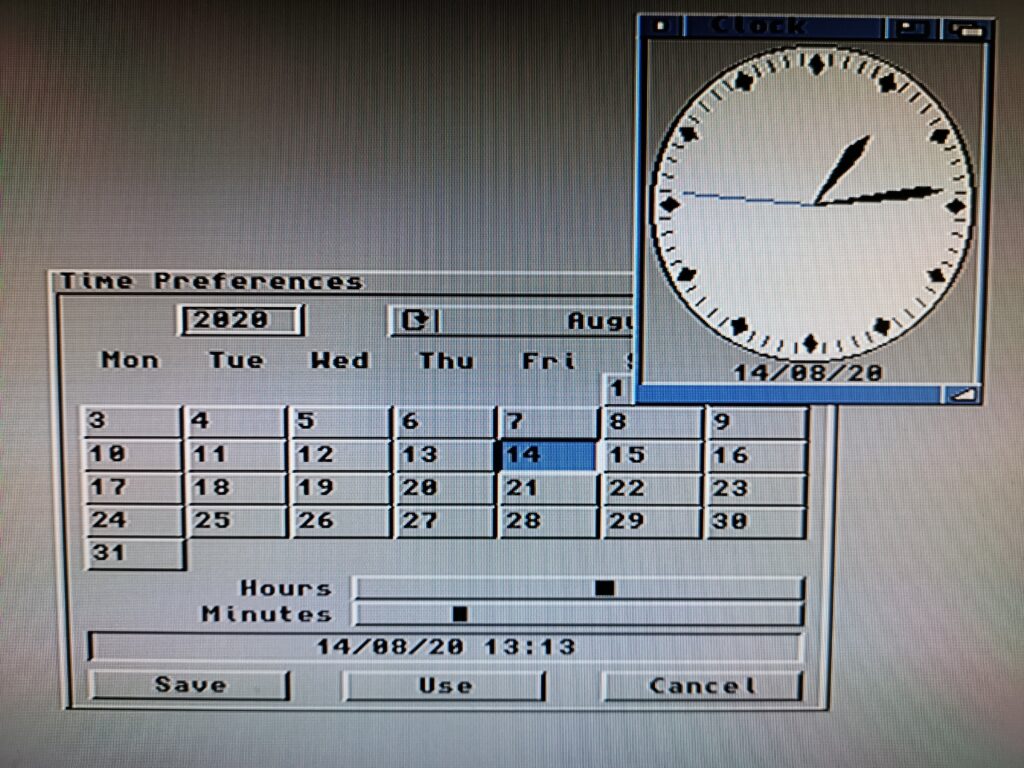 With the card installed and tested there was just one niggle for me to sort out. Every time I booted my A1200 I was getting the following error about no MMU library being installed:

It then goes on to recommend you either install these files off the disk that came with your accelerator card or search Aminet. As I didn’t receive a disk with the card I went straight to Aminet and had a rummage around. Sure enough there was an MMULib.lha download for just such a scenario. I ran the installer and let it install an mmu.library and a bunch of 680×0 library files and then rebooted. And just like magic the error was gone – happy days!

Now I just need to get hold of that SCSI module!